How does LTTE diaspora make money & is any of it spent on Tamils? NO

It is a perfect time for Tamils in particular the non-LTTE supporting ones to wonder how much LTTE has been making using Tamils as an excuse. It is also a good time for Tamils to wonder how far Tamil politicians have delivered, also using Tamils as an excuse. LTTE & Tamil separatism have thrived for decades purely on account of its propaganda & that propaganda thrives because of the power of money generated from a global network of illegal & legal businesses that LTTE diaspora are running. But who are the beneficiaries – certainly not Tamils & certainly is every Tamil & non-Tamil who are able to get their dirty hands on the LTTE booty. 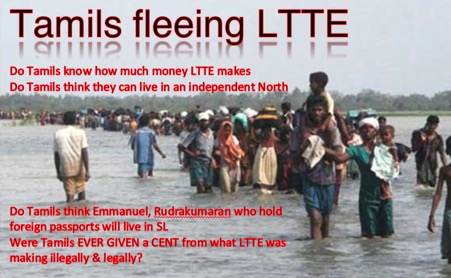 No 18-year old can create a terrorist movement with a handful of unemployed Tamil youth. So how did Prabakaran who initially set up the Tamil New Tigers in 1972 & rechristianed as LTTE in 1976 become so powerful with a hierarchical command structure, uniforms & possess more sophisticated machinery than the national army of Sri Lanka? How did LTTE make so much money & buy so much help?

Good question – that answer gets complicated because he had not just one or two helpers but a host of very powerful players that included foreign intelligence, foreign governments, the Church & associated NGOs.

LTTE’s international headquarters opened in London in 1984 runs openly without any fear of UK Government. Inspite of Canada, US, EU, UK banning LTTE, LTTE operates offices in 48 countries. Naturally a formidable force against the State of Sri Lanka. What do these interested parties expect helping a terrorist movement – the mono-ethnic demand of Eelam through the new constitutional changes covering 29% of land mass & 60% of coastal belt in Sri Lanka now makes sense & looks like the 30 year wait & collateral damage of lives is slowly delivering on their ultimate objective. A separate area which the Western nations has access & direct control over in a strategically important area of Asia – no wonder the West wants Eelam!

It may also explain the silence of this so called international community that watched LTTE run its own defacto territory with own police, own courts, own administrative systems, own taxing even own currency – as part of an experiment to see how they could run their own if a separate area was in fact carved out! Come to think of it, this too makes sense now.

What were foreign intelligence & police doing when LTTE were plying ships from Easter Europe through Africa & other Asian countries carrying military hardware as general cargo? By 2005 LTTE had 20 vessels & trawlers. LTTE operated boatyard companies in Indonesia & Philippines to transport arms & ammunition posing as general cargo with LTTE holding fake names & forged passports. Bulk of military hardware was purchased from North Korea & merchant vessels from Japan that got sold its ships at cheap rate to outsiders every 10 years.

LTTE airforce all had their training overseas in private training schools. LTTE procured 5 aircrafts from Czechoslovakia passed to Germany through land & shipped to Singapore, taken via sea to Indonesia to a bonded warehouse. LTTE operated 7 airstrips in Sri Lanka. These procurements were made through the hand carried hawala system.

Prabakaran, Maniwanan, Castro & deputy Nediyavan controlled the LTTE international network. It was only in January 2009 that Prabakaran appointed K Padmanadan to coordinate LTTE international affairs, an area Prabakaran had been directly overlooking. KP took over entire international network after May 2009 which was challenged by Nediyavan leading to a split & formation of the TEPA (Tamil Eelam People’s Assembly) Nediyavan controls activities from Norway/Europe where most of LTTE assets, media including Tamilnet, Tamil24, TV1, Voice of Tigers operate along with 350 LTTE schools (Tamil Cholai / Tamil Alagam) with 22,000 Tamil students enrolled charging Euro 15-20 from each student. All schools are headed by pro-LTTE imparting Eelam ideology & hatred for Sinhalese among the young generations.

There were no Father Emmanuel, Surendiran, Rudrakumaran calling the shots before 2009. It was after KP’s arrest in August 2009 that Rudrakumaran and the GTF, BTF, TGTE began an open & active role. All these characters had been playing a back-side role out of the limelight & did not show their colours till after Prabakaran died. Rudrakumaran did serve as LTTE lawyer during peace talks 2002/2003, he was also one of the coordinators of the World Tamil Coordinating Committee in US. Noteworthy is that over 80% of the Tamils living overseas did not participate in the TGTE elections in 2010 of which Rudrakumaran appointed himself as its Prime Minister! With TGTE banned as a LTTE front since 2014 why has the 12 countries where TGTE is running offices not investigated them

Though after 1983 close to 1m Tamils left Sri Lanka to reside in mostly western countries, money collected voluntarily or by force from them is insufficient to purchase all of the military hardware LTTE needed (hardly 10% are actively involved in LTTE interests). However, these Diaspora were strategically located to enable them to influence vote banks & local politicians. This explains why foreign MPs have taken surprising interest in Sri Lanka’s internal politics & are not shy of attending pro-LTTE events inspite of their countries banning LTTE.

Father Emmanuel’s links with LTTE go back to 1990s – he has 12 pro-LTTE diaspora organizations under him co-manned by Nediyavan, Emmanuel coordinates the GTF, inaugurated in February 2010 attended by then Foreign Secretary David Miliband. BTF was established in 2006. Suren Surendran is spokesman for both GTF & BTF. LTTE also has an ex-combatants group comprising all the former cadres.

In 2007, when LTTE tv station TTN was closed down by US & France, LTTE tried to recommence operations from Singapore using SAT link, when that failed they tried Italy, Serbia, Israel, Hong Kong to finally settle in UK under GTV. LTTE operates TV1 & TVi from Canada.

According to 2016 Canadian Census there are 157,000 Sri Lankan Tamils in Canada. If we take the minimum Canadian $2600 x 157,000 comes to Canadian $408,200,000 monthly without amount collected from Tamil businesses. According to Mckenzie Institute Tamil businessmen in Toronto have to give over 20% of their profits to LTTE.

In Germany, ten LTTE members were caught extorting 50 Deutschemarks per month from Tamil families. Tamil refugees in Germany and other European nations had to pay $60 a month.

In 2001 LTTE were charging people USD 12,000 per passenger to be smuggled into Canada or US illegally.

A major source of LTTE money comes from heroin/narcotic smuggling globally & in Sri Lanka. By 1993 there were said to be some 50,000 drug addicts in Sri Lanka! Authorities now say it is 250,000. The narcotics market in Montreal Canada is $1 Billion.

LTTE money laundering is another area in which LTTE makes substantial amounts of money https://www.swissinfo.ch/eng/society/money-laundering_tamil-tiger-financiers-to-stand-trial-in-switzerland/43798808

Majority of the LTTE fronts run as charities exploiting the social security benefits in the host countries. Many LTTE fronts operate as humanitarian agencies again using these as cover to camouflage their LTTE links & objectives. Most of the individuals operating within this nexus of illegal & legal set ups globally are interconnected & of the same families or groups therefore they are quick to take counter measures when issues arise. A good example is when TRO was about to be banned they ensured all funds were transferred to another LTTE front White Pigeon.

In 2004 Jane’s Intelligence declared LTTE annual profits to be in the range of $300-400million.

Look at the portfolio of sources of LTT funding ranging from credit card scams to legitimate schools, Montessori’s, shops, to money laundering, drug smuggling, people smuggling, arms smuggling, even body part rackets and the scale of income that these LTTE elements is anyone’s guess in particular the saving they are making now that they do not have to purchase arms/ammunition, sophisticated military hardware & communication systems or maintain at least a 30,000 cadre base (food, clothing, medicines etc)

So the annual profits has to be in excess of $500m for the global LTTE Inc.

With the ground force no more & the hardcore cadres virtually leaderless it is the tigers in suits who today call the shots. Rudrakumaran, Emmanuel etc are the new face of the LTTE. They never held VVIP roles when LTTE leaders was alive, but now that he is no more these are the men dictating how the global LTTE functions.

All of them are holding foreign passports, their families may probably not have even come to Sri Lanka, perhaps they cannot even speak Tamil or speak with an accent that no Tamil in Sri Lanka can understand so why are they bothered about an Eelam in Sri Lanka? Or are they raising the Eelam calls on behalf of the countries that hosts them? That is quite possible especially when these countries inspite of these LTTE fronts being banned are not doing anything against them even when their own citizens are getting ripped off by them through credit card & other social security scams.

Many Tamils may be thankful to the LTTE because they are having at least one member of their family living abroad but they now need to seriously ask themselves whether they want to go the whole path of Eelam because none of the players calling for Eelam from abroad are likely to give up living in Europe, Canada, US or Australia & start life in a separated North where there would little means of food, water & other means to sustain a separate independent territory. Wiggy is in his 70s, Sambanthan close to 80 – for them Eelam call is just a political survival as is for other Tamil politicians.

But did LTTE look after the Tamils in Sri Lanka, did they spend a penny to make life better for Tamils? Did they make a road, a school, a water tank, drainage, a park, a library? But look at the lives & houses of these LTTE representatives overseas? Look how they are living? Look at where their family members are studying & where they work? Tamils should realize that these LTTE fronts have been & are using Tamils only as a cover to continue their plush lives and the Eelam is just a slogan for them to gain VVIP recognition for themselves globally & among diplomats & foreign governments.

Tamils must now be more sensible & look at their future not become guinea pigs to the foreign-passport holding LTTE front representatives or Tamil politicians who are probably working to realize the agendas of West/India in the bigger geopolitics taking place using minority demands” which they have helped shape into international disputes.