If UN can shut lid on China’s Uighurs why not wind up bogus allegations against Sri Lanka? 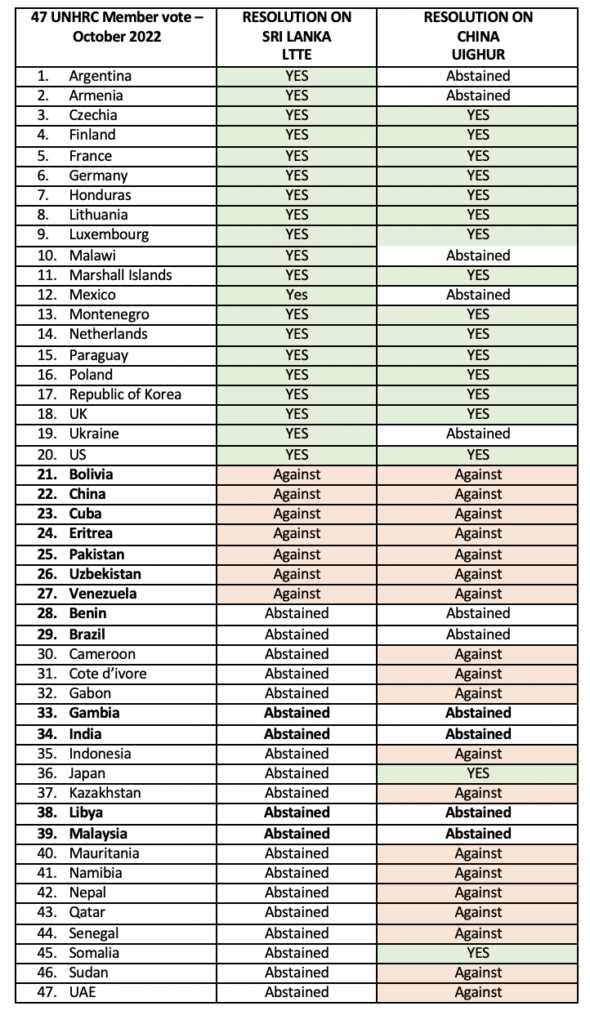 The statement by the Chinese foreign affairs spokesperson is poignant & relevant to Sri Lanka as well “this is a victory for developing countries & a victory for truth & justice…. Human rights must not be used as a pretext to make up lies & interfere in other countries internal affairs or to contain, coerce & humiliate others”. In 2009 Sri Lanka became the only nation to militarily end a terrorist movement while rescuing close to 300,000 people being used by LTTE as human shields, hostages and some even shot dead. Without applauding Sri Lanka for this achievement, the UN, Western bloc of nations and their cohorts the Church & NGOs sided with LTTE Diaspora drumming a series of accusations that continue based on well-funded propaganda sans facts or evidence. The attacks are sustained for the very reasons that the Chinese spokesman has highlighted “human rights” used as a “pretext to make up lies & interfere” in the internal affairs of Sri Lanka and to “contain, coerce and humiliate” those who ended 3 decades of terror in Sri Lanka. There are plenty of “may have been killed” in Sri Lanka’s allegations too but no names, no dead bodies, no skeletons – so what war crimes or ‘genocide’.

In 2018 UN announced a network of detention centres in Xianjiang claiming at least one million Uighurs were being held. UNHRC head Michelle Bachelet called for ‘unfettered’ access to the region.

UN was allowed and Bachelets report did not mention ‘genocide’ but claimed ‘serious human rights violations’ had been committed and that detention of Uighurs and other Muslims may constitute ‘international crimes in particular crimes against humanity’. https://news.un.org/en/story/2022/08/1125932

However, the UNHRC will not be debating Uighurs inspite of UNHRC alleging Uighur abuses “may amount to crimes against humanity” this echoes the UNSG’s panel report claiming 40,000 ‘may have been killed”. Both cases the use of ‘may’ does not confirm that anything did actually happen. May certainly does not connote to mean such crimes did happen.

The motion to debate Uighur issue was defeated with 19 votes against the debate, 17 votes for debate and 11 countries abstaining. Ironically, many of those that voted against the debate were from Muslim-majority countries – UAE, Qatar, Pakistan, Somalia, Indonesia. Even Ukraine abstained as did India.

Michele Taylor the US representative at UNHRC is right about one thing ‘no country represented here today has a perfect human rights record’ – however the US knows that more countries are treated different than others & small countries like Sri Lanka are often the punching bag. Powerful countries only want to use international forums to advance their interests and their interests alone. Human rights has become a fashionable means to exert international pressure against countries. Sri Lanka is one good example.

While China was able to strike politicized issues off the UNHRC table within 4 years of becoming a political issue – Sri Lanka has been struggling to meet the lies and coercions since 2009. Annually, new sets of non-conflict related items gets plugged into resolutions that use “Tamils” as a camouflage for political agendas.

The flipside of gathering more witnesses against Sri Lanka’s Armed Forces means that they have an overwhelming challenge to produce the names and details of the dead without simply holding memorials and commemoration ceremonies. These events that are mostly to mourn dead LTTE are promoting the event as mourning “civilian” dead. Sri Lanka cannot be accused of killing LTTE terrorists and claiming LTTE dead is ‘genocide’.

We live in times of fake news, fake stories and false flags. We saw how a distinguished war veteran like Colin Powell lied to the UN General Assembly holding a test tube! Who remembers this lie that led to the bombing of Iraq?

Maybe those blowing hot & cold over the decision regarding the Uyghurs would like to recall the lies and false flags used to invade & occupy Iraq, Afghanistan, Libya, Syria and so many other countries by US & NATO & these nations continue to be occupied illegally.

Thus, we question, how much of the Uyghur narrative is actually factual?

When powerful majority-Muslim states voted against debating the issue siding with China, we have to wonder how much of this issue is politically based given that it is being drummed by the anti-China bloc claiming to be siding with the Muslims. Weren’t these the very countries that have blown the Middle East into the cave days since 2001?

Funnily enough the same anti-China bloc are the one’s that keep on passing resolutions against Sri Lanka. It has become an annual farce where lies get drummed and no evidence gets shown. Sri Lankan delegation returns home slapped with conditions tied to loans/aid and other trade transactions.

It is now 13 years since UN has been drumming baseless allegations against Sri Lanka wasting time annually on taking up Sri Lanka & plugging issues that can easily be addressed during the UPR sessions. Country-specific resolutions and picking on a conflict that has already ended and 13 years old is creating ugly precedents that will impact other countries too.

Thankfully, Muslim majority countries have realized the hidden objective behind the Uyghur issue targeting China and voted to not debate the issue.

Indonesia that abstained in Sri Lanka’s vote, voted against the debate on China.

It is time the UN stopped being childish and continuing the charade for political gains of select bloc countries.

We are happy that China does not have to put up with the bandwagon of lies that Sri Lanka has been having to deal with since 2009.