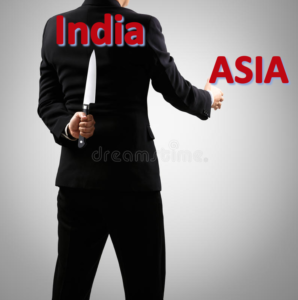 What kind of double game is India playing? How long does India think it can pretend to be friends of its neighbors while planning the downfall of its neighbors? Obviously this stems from a DNA that goes back to colonial rule wherein India was Colonial Britain’s trusted sepoy. India became India only after the Colonial British christened it as India in 1947. When India is today not only part of the Five Eyes (US-UK-Canada-NZ-Australia) Intelligence Alliance in 2020 and a member of the QUAD since 2007, India is purely functioning as a vassal of the West and even India’s foreign policy is today decided by Washington.

There would have been a good reason why colonial Britain treated British India more of a sepoy than it did Ceylon. The British army was supported heavily by Indian sepoy army. South Indians were colonial Britain’s eye to prosperity, enslaving on their plantations and transported around the world. Indians that make up populations in the Caribbean, South Africa, East Asia are those that colonials transported as indentured labor. The Indian sepoy army played a key role in slaughtering their own people on behalf of the British East India Company. History is certainly getting repeated as India is ever ready to do as the West orders. Indian sepoys were recruited by the Portuguese, the French, the British and other Europeans in plundering nations.

India is agreeing to do the very same via R2P & Geneva Resolutions.Notice the manner West dishes out international positions, prestige, privileges to Indians who are doing a better job on behalf of the Western nations & their agendas than the Westerners themselves. Look at the number of Indians playing lead roles in the West at government & private levels! They claim to be ‘Indian’ for publicity only – their heart & mind serves western interests and the awesome feeling they get of rubbing shoulders with the white man. The Navi’s, the Biswals, the Bobby’s and the Kamala’s are West’s heart throbs for good reason.

Fast forward to present times the QUAD alliance was initially discussed in 2004 with official level meetings commencing in 2007. Note how it matches the timelines of Sri Lanka’s military offensive against LTTE. Obviously, India and West realized that Prabakaran was a barrier and a thorn to their designs for South Asia. They planned his ouster pretending to fight for his survival. A LTTE withou Prabakaran was a good tool for the West’s R2P Geneva.

The Pivot to Asia came in 2011, round about the same time that Ban Ki Moon suddenly decided to appoint a personal panel for a conflict that had concluded. No surprise his son-in-law is Indian and was in the IPKF! The successive UNHRC Resolutions against Sri Lanka since 2012 are no coincidental initiatives. India played a key role on the backdrop of each resolution, even the draft clauses inserted. India’s role was no different to its background role played when drafting the 2002 Cease Fire Agreement mediated by Norway. India played the silent partner.

Also note Sri Lanka’s regime change in 2015, it was the same time that India not only assisted US to oust Rajapakse but went on to sign a Joint Strategic Vision for Asia-Pacific and the Indian Ocean Regions with the US. The hype India promoted for ousting Rajapakses was allowing Chinese submarine to Sri Lanka claiming it a threat to India’s security. Ever since 2015, US planes have landed and flown across Sri Lanka and US ships and marines regularly docking at all of Sri Lanka’s Ports, is no matter of concern for India’s security it seems. Wait till US rolls out its other plans unbeknown to India! But, for the moment India is mesmerized by the new-found co-habitation with US and US is only happy to dole out titles knowing India will do anything in exchange.

When US renamed its Asia-Pacific Command in Hawaii as the Indo-Pacific Command, India was on cloud 9. India’s dream of becoming a member of the UNSC is momentarily replaced with the Malabar Exercise which is the military dimension of the India-US vision for an Asian NATO. Ironically, the camp that claims to be championing to challenge and contain China are all dealing with China more than any other countries. Hypocrisy at its best. China in fact spends much to help Indian start-up companies in India and have elevated plenty of Indian entrepreneurs.

Sri Lankans knows too well how Sri Lanka has suffered at the hands of India. Whether India was outfoxed into playing a role in nursing Tamil militancy, India was without a doubt a willing player in allowing India to be used as a logistics hub for LTTE and India trained and even funded over 3 dozen Tamil armed groups of which LTTE became the most prominent. India simultaneously pretended to be Sri Lanka’s friend, Tamil’s big brother, LTTE’s logistics partner and West’s consort in this ugly exercise.

We also know the role played by Indian intel even preferring to side with the LTTE ‘boys’ against India’s peace keeping force sent for a different reason but packed off for Sri Lanka’s fortune. India’s other agent JVP ensured a large number of lives were lost in vain during this horror period. We can all recall the infamous parippu drop violating our airspace, the phone threat by Dixit and the whisking away of Prabakaran to India in a helicopter until the Indo-Lanka Accord was signed in July 1987.

Sri Lanka’s terror would have ended in May 1987 and no May 2009 had it not been for India’s intervention.

All of India’s trade agreements with Sri Lanka has been one-sided and tipped to be advantageous for only India. India spends a lot of efforts in lobbying locals to be their mouthpieces. These voices are now well known to all.

Therefore, the local camp that follows the appeasing model ‘don’t anger India’ not only offer no alternative but wish to give anything and everything India demands of Sri Lanka completely ignoring India’s bad record of destabilizing Sri Lanka pretending to be its friend. Probably they played a role in preventing Pakistan PM from addressing Sri Lanka’s Parliament simply to please India. This highlighted the spinelessness of the Government. An element it needs to seriously take note of. Thankfully, the patriotic people have fought tooth and nail to ensure Colombo’s ECT was not given to rogue Indian port operator though Government stooges are now trying to do greater damage by offering WCT.

Exactly why should India be given anything if India is trying to at every level to destabilize Sri Lanka?India has never supported Sri Lanka in Geneva and India is now lobbying countries adopting bullying tactics learnt by its masters in the West to force countries to abstain from voting against the UK backed Core Group Resolution against Sri Lanka. When the Core Group inserts 13a and the UNHRC head parrots 13a in her report, India’s role against Sri Lanka is obvious.