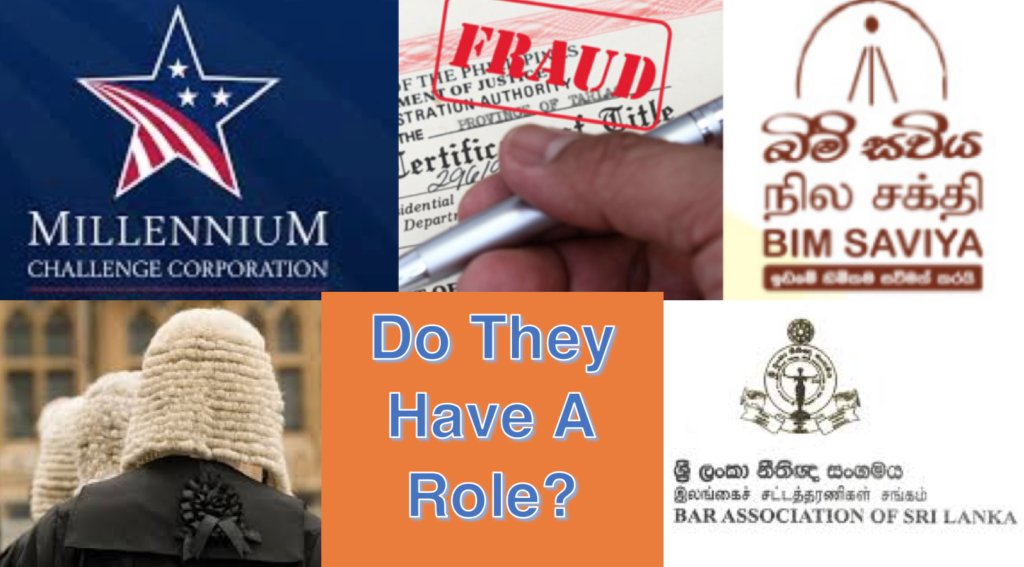 The Legal Team at Sri Lanka Study Circle were approached & requested to place their view & opinion regarding the impact of Bim Saviya & its link to MCC & the manner the Govt & Ministers were insisting on funding to introduce a foreign law that would impact Sri Lanka’s land sovereignty as well as the judicial system.

Why does Sri Lanka need to fund a foreign law?

According to Champika Ranawaka, it is the government that  pleaded via a report known as the  Constraints Analysis report, funds from the  MCC to implement Bim Saviya or Torrens law [a grant of $480m across  5 years that would irreversibly impact Sri Lanka’s state land ownership.]

This Act was passed in 1998 [ Bim Saviya / Title Registration] by the government which was a cut & paste of Australia’s land law with no legal input or debate/discussion on its impact locally.

In Australia they call the law, Torrens law as Robert Torrens the Prime Minister and the legislators,  much against the wishes of the lawyers, 150 years ago introduced the law to divide the land into square blocks and privatized the lands to give the land to the new owners.  [The public need to have access to the literature under Torrens law or Title Registration and its implications on the internet]

The law came to Sri Lanka with a  brand new name as we all know called Bim Saviya.

Many of these lawyers have written many papers invited by Registrar Generals of UK USA New Zealand & other nations.

Question 1: MP Champaka Ranawaka says more funds are needed to register 11,250,000 of the 12million blocks, after 20 years of failing to implement Bim Saviya.  He say we failed as we  registered  a mere  750,000  for 20 years out of 12 Million owners. – how long is it going to take to electronically register the remaining?

It is sad that Champika Ranawaka is not familiar with the legal and World Bank research and reports.

As  further funds from MCC cannot remedy the unfortunate legal situation facing the owners, CID and the Judiciary are unable to deal with the law of Bim Saviya which has completely taken away the judicial function to inquire into fraud and the CIDs function to detect fraud.

Question 2: How much has it cost the GoSL throughout 20 years to implement Bim Saviya?

Do we need to spend more?

The exact funding is difficult to ascertain as funding has been given to different ministries which have failed to coordinate the main objective. The World Bank’s “Quality of Land Administration’ report declares that Sri Lanka’s operation system is fragmented & in disarray.

It is estimated that $2.5m per year has gone for this project across 20 years ($50million)

The other outcome has been the increasing legal disputes between land owners as a result of the title registration. The Commissioner Title Report highlights the issues faced.

Question 3: What does World Bank say of Bim Saviya

The World Bank did not want Australian Torrens Law (Title Registration) or Bim Saviya in Sri Lanka to be abruptly imposed.

Jessica Mott confirms that Sri Lanka was free to select the most appropriate design for local conditions which Sri Lanka did not. Why did Sri Lanka not do so?

Question 4: What do the legal experts say about Bim Saviay?

The Act 21 of 1998 Title Registration passed in Sri Lanka as Bim Saviya Act has no owner to take credit for drafting the Act.  It was an abrupt overnight attempt to receive funds and its purpose is to beg for more funds.  One of the main reasons for the current state of affairs is funds were not used to revise colonial laws to prevent fraud and register owners in a compulsory register to introduce land registration as required by international standards. [ World Bank  Repot 2007 ]

In Sri Lanka successive governments have watched corruptions & land fraud with ad hoc committees appointed whenever the matter comes up and had carelessly introduced to Sri Lanka in 1998, the law practiced in Australia which has stringent laws to protect registries from fraud.  Many books have been written by Professors of law on  land registry law cyber crime and electronic evidence.  They are special subjects which have not been introduced or studied in Sri Lanka hence we have no one to advice on the Australian law Bim Saviya.

5] Why is the Government insisting on  funds for the preparation of a  2nd register called Bim Saviya  from the MCC ?

MP Champika says it is the Government that had insisted and required more funds from the MCC to introduce a 2ndregister without the simple amendments to our existing laws. [A1]  Why is the Government insisting on a 2nd register  to continue with complicated land laws of a foreign country and  further insist on  privatizing state land .

[ Justice A.R.B. Amarasighe’s book on Title Insurance— claims it is not advisable to introduce the Australian law, he prevented  the attempt made by the government in 1952]

When we had a register operating from 1864, what we required to do was only a few simple amendments to upgrade the register to be a compulsory register  & to be on par with the international standards to reach a higher status in the Doing Business Index.

Question 6: What does the BASL say of Bim Saviya

The BASL is of the opinion that changes to land law is detrimental & will not be beneficial.

After 20 years the law has helped  fraudsters. This confirms what was predicted by the BASL.  Many land owners are before court with new methods of fraud, with  two voluntary registers   with no laws to prevent fraud. It is a time to assess the cases before the CID and court

They are in an embarrassing situation as the Bim Saviya law has disempowered the judiciary from inquiring into fraud.

Don’t the legislators know this, before asking for more funds .

Question 7: What does the Survey General say– Why did  Sri Lanka introduce cadastral plans without registering the plans familiar to our courts UDA and local authorities.

The Survey General has informed the Committee appointed by Minister of Justice in writing 2022 that the Cadastral plans required by Australian law is not acceptable by the UDA & local authorities. He says that it will be a waste of funds

[A US firm was outsourced to carry out Cadastral mapping of Sri Lanka for $150m in 2016.

As per Survey General, this is a cost burden on the tax payer.]

Question 8: What does the Committees  appointed by the President and the Minister of Justice in 2022 say of Bim Saviya

This Committee concluded that it is not possible for Bim Saviya to introduce compulsory register for Sri Lanka.  This does not  meet international standards or UN Doing Business Index standards. In fact the recent Committee appointed by the Minster of justice in 2022 concluded even to change the name of  Act 21 of 1998 to  Voluntary Title Registration. It is inevitable that we will be far below in the Doing Business Index as no one could do land business searching for owners in an incomprehensive land register.

A letter dated 6 April 2016 by the Registrar General, explains the consequences of Land Registry is not the place to determine ownership it’s a voluntary register where all owners are not recorded. Buyers and banks would need to first examine deeds that are not included in the register to find out owners.

A new office has been set up with a massive expenditure without trained legal officers to check ownership  to perform the task of searching owners for 12 Million blocks.

The Commissioners report explains the frustration of such a judicial task entrusted to layman.

However the Title Commissioner has recommended to reevaluate the Bim Saviya process as well as the viability of the law. As per the Commissioner it will take over 50 years to complete the title registration process. If the law needs implementation the legislators need to invest on research for example UK has registered under the new law only when a new transaction takes place where lawyers carefully look into ownership.

Question 10: Was there earlier attempts to introduce Bim Saviya or Title Registration?

1]The initial attempt was made in 1904 see book written by  E R S R Coomaraswamy, the attempt was not successful as the law is not suitable to or country

2]The next attempt was made post-independence. But Justice Dr A R B Amerasinghe rejected the system especially the cadastral plans. He introduced a hybrid system which required no funds and we would advise legislators  to look in to this system .

Question 11: Does Sri Lanka need to reach a higher standard in the Doing Business Index

What is required  is not funding we require the land registry to be compulsory and a place  to determine ownership free of fraud. A one stop shop as in all countries that are presently in a higher place in the Doing Business Index. Sri Lanka’s land registry policy is voluntary from 1864 & governed by Ordinance 23 of 1927, this  is our  problem as opposed to the standard required by internationally as said in the  Paper published by the World Bank titled; ‘Quality of Land Administration in Sri Lanka’.

RG explains policy —–This policy which is archaic had been explained to the Prime Minister of Sri Lanka in a letter dated 6 April 2016 by the Registrar General. The letter says — that the Land Registry is not the place to determine ownership it’s a voluntary register where all owners are not recorded governed by Section 7 of Ordinance 23 of 1927. Buyers and banks  would need to first examine deeds that are not included in the register to find out owners.

The Bim Saviya came after World Bank advised us to first research with a loan scheme called Learn Innovative [LIL] The World Bank itself had disapproved the way in which the act  was introduced without any research.   According to their reports the law is not suitable and  Sri Lanka is not ready for the massive change in the land law as given in the Act 21 for which no one seems to be responsible .

Legal committees have concluded that Sri Lanka  cannot have a compulsory register with Bim Saviya like in other nations which have reached higher position in the Indices ; Doing  Business Index , Property rights index

Instead of  demanding funds specially today, having no confidence to repay, Sri Lanka’s Govt must set up a legal land research entity under the Govt to look into the colonial laws & its conflict in present times and accordingly revise the law with laws that cater to the present modern conditions, if they require a better place in the Doing Business Index. There is so much of literature available from other countries that had prepared registration laws to introduce electronics to be in a higher position in the Doing Business Index and most importantly a system to protect the owners of the country .

You may address any further queries to the Sri Lanka Study Circle Legal team directly via email: srilankastudycircle@yahoo.com