It is Tamils & Muslims who must CHANGE now 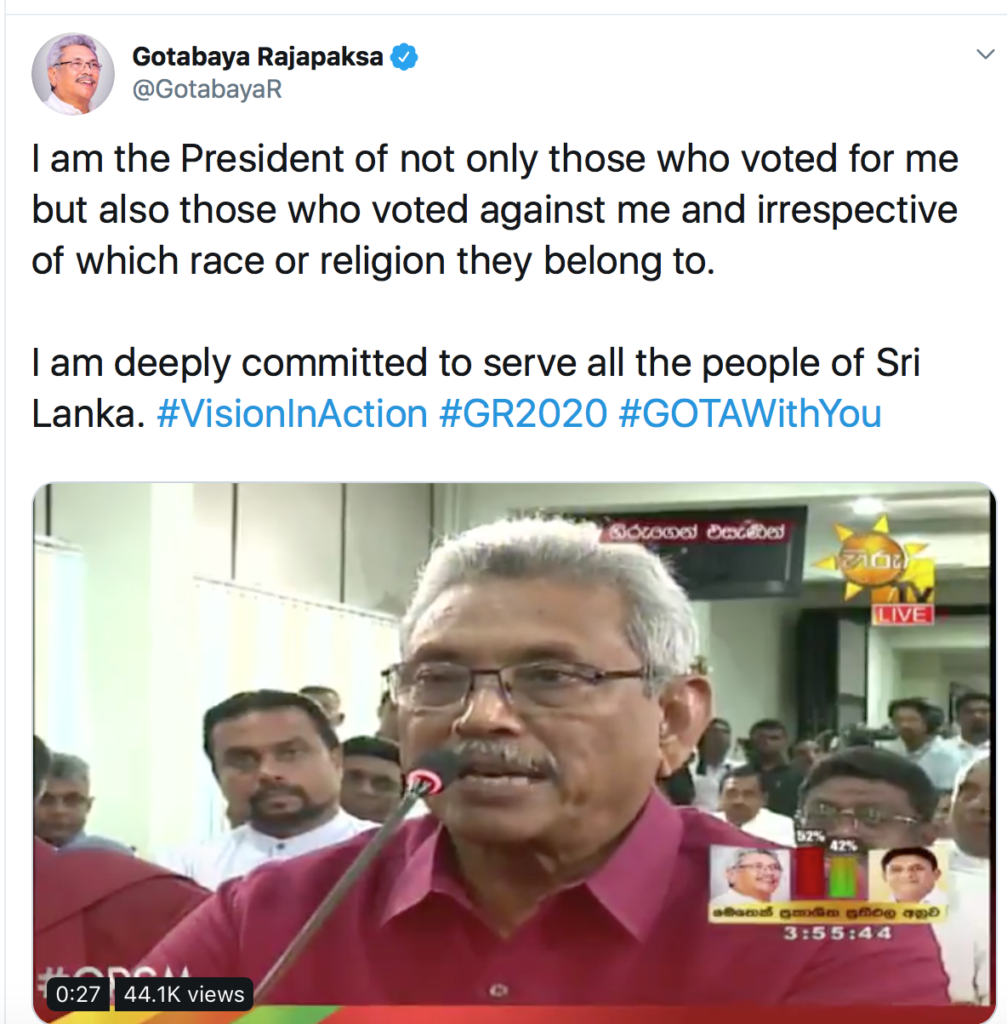 When SLPP began its campaign – Gotabaya Rajapakse’s message was clear – One Nation – One Law. It was an inclusive motto. There was no segregation. There was no discrimination. It was something simple for all to relate to.

The Opposite Camp on the other hand were with a bunch of separatists-fundamentalists, politicians and political parties we thought everyone was fed up with.

We thought people would not listen to them for Tamils & Muslims themselves publicly denounced their leaders.

So our guess was that they would give GR a CHANCE because he was only speaking of a Vision & Policy.

When his opponents on top of their stages were slinging mud, threatening to hang the Rajapakse’s from windows, speaking in abusive and derogatory terms, GR and his team only spoke about the future plans and policy.

The GR Team had minority representatives who also appealed to give GR a chance. They campaigned among their people to appeal to them to change their thinking. They were also sure that their people would give GR a chance. When people spoke about development, cleanliness and good management – GR was the only person who came to mind who had proven via actions what people claimed to want. But, were these sincere thoughts or were they just hiding what they felt?

Everyone was optimistic that they would be thinking of the Future & not the Past.

The results have not really surprised us because if our established conclusion of minority thinking was correct that was how they would have voted whatever laurels of peace we offered but our hearts wanted to prove us wrong but eventually the minority vote result proved otherwise. It was virtually identical to how they voted in January and August 2015. What is it that the majority have done wrong to them? What is it that they want? What is it that they don’t have that the poor rural Sinhala voters enjoy?

Now, as damage control, the guilt is being hidden by quickly attempting to transfer blame on the majority. It has always been to point at the majority and blame them for all ills. The fact that an opportunity for them to be inclusive was rejected by them with no valid reasons is being quickly swept under the carpet and there are some trying to showcase that they need to be more ‘reconciliation’. It takes two to tango. Sinhalese have done their part. What have the minorities done in return?

In the poorest of villages – where people suffer to have a meal a day, the Sinhalese went and voted realizing that national security & protecting Sri Lanka required their voice and vote. They knew this election was far more than just bringing Gotabaya Rajapakse to power. If these people could go & vote without complaining about what they don’t have – we see no basis for complaints by others.

However, we do realize that separatist and fundamentalist thinking elders & their politicians are doing great injustice to their children, the future of Sri Lanka by dragging them to continue the hatred and vengeance that they live with day in and day out.

This is not good for the Youth or the Future. Therefore, we certainly need to integrate all Youth and make them stakeholders for the future. These programs will certainly be rolled out and we hope these separatist and fundamentalist elders will leave the Youth alone to decide for themselves instead of dragging them to live with hate and vengeance.

Of course, we appeal to the elders to rethink how they have voted and be the FIRST to reach out to integrate as that is where the Change should start. Will they is left for them to think about.

Demands without Duty is unacceptable

Reconciliation without Reciprocity is unacceptable too.

Nothing works only on paper – these terms imported from West are just words used to diplomatically & politically exert pressures on nations. The countries preaching the terms do not practice a word they promote and force upon nations to enforce. Now they are tying aid and grants to such terms.

All citizens must learn to love the Nation & be proud of the Nation & acknowledge its proud history & heritage and not try to infuse false history & change it for political advantage.

Minorities in particular have always found it easier to complain of what they have not got or what the majority has not done for them but what have the minorities done in return to make such demands?

Remember – LTTE was brutalizing both Tamils & Muslims. Areas of North & East were not developed for 30 years not because the government did not want to but because the LTTE was in control over these areas. However, immediately after eliminating the LTTE, the GOSL embarked upon development programs that included providing electricity to areas that were living in darkness. The then govt did much to uplift the lives of these people.

Why should they still shower hatred even after giving them what LTTE did not? Can someone please answer this? Didn’t the then govt remove the fear of living they experienced under LTTE? Could they not freely travel to any part of Sri Lanka because LTTE was no more? Have they forgotten how life was before LTTE was eliminated and how life change after LTTE was no more?

From all of the minority parties and minority political leaders we like to ask – what have your party done for the betterment of the country & the citizens not only for your people? Enjoying tax payers money (70% of which is contributed by the majority) – what have minorities returned to the Nation?

Its time everyone started doing a SERVICE TO THE NATION without ONLY COMPLAINING ABOUT what the NATION hasn’t given them….

ASK YOURSELF THIS QUESTION FIRST –

WHAT HAVE YOU GIVEN THE NATION to DEMAND from the NATION