UK Telegraph – what exactly is your problem with Sri Lanka’s new President? 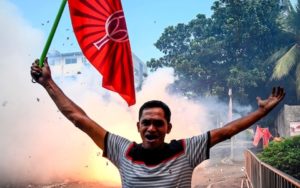 UK was a former colonial invader occupying Sri Lanka from 1815 to 1948 & until 1972 when Sri Lanka became a republic. Let us not dwell into the atrocities committed under colonial British rule which mind you has yet to be acknowledge, apologized or compensated. As teacher and preacher of parliamentary democracy, Sri Lanka held a democratic election on 16th November to elect the country’s 7th President who became Gotabaya Rajapakse with a historical vote result. It did not take long for a barrage of anti-Gotabaya articles to emerge and seriously questions what is this ‘democracy’ and ‘freedom of speech’ the West is promoting when an elected President is character assassinated as he is without even giving him a chance to assume office.

So are we to presume that Sri Lanka has faulted in ‘suppressing’ LTTE who are the Tamil Tigers that the author Qadijah Irshad is referring to? The West can go bombing countries dropping drones and killing innocent people claiming to be going after terrorists, but Sri Lanka is at fault for eliminating a terrorist movement? Can Telegraph UK please answer – yes or no.

What is the ‘fear’ raising among Sri Lanka’s religious & ethnic minorities? Who is claiming this and based on what evidence? Fears were raised when inspite of 97 foreign intel warnings the government in power failed to protect over 350 lives from becoming victim of jihadi suicide terrorism. No such colossal life was lost during the reign of the previous government as a result of state negligence and inaction inspite of prior warnings. Was it therefore wrong of voters to fear for their lives and place national security as one of their key concerns in voting?

We seem to again return to a fallacious choice of the word ‘civil war’ – Sri Lanka did not suffer a civil war, Sri Lanka suffered terrorism and LTTE were Tamils but LTTE also killed Tamils which is why we continue to say not all Tamils are LTTE but all LTTE were Tamils. Please correct this notion. Some of Sri Lanka’s best Tamil leaders were wiped off by the LTTE including the most admired Foreign Minister Mr. Lakshman Kadiragamar.

Another correction that needs to be made is that there are no ‘charges’ against President Rajapakse but ‘allegations’ which have no facts or basis but are all part of an international campaign by those angry that their pet LTTE terror movement was eliminated. How about coming up with names and facts instead of using a broad brush and simply parroting what everyone who wants to character assassinate is presently doing.

We would like to ask the author whether it is a crime to regard anyone eliminating a terrorist movement as war heroes? Obviously those living overseas and writing from overseas have no idea what we people went through when LTTE was reigning terror. We didn’t know whether the next bomb would go off, our parents dreaded us leaving homes and we in turn dreaded our parents leaving home not knowing when and if they would return. Ambulances were heard almost every hour. The newspapers had only obituaries and photos of the dead. Don’t make it out to be that the death of the terrorists is to be mourned and not the dead of innocent people who had done no wrong to these maniacs carrying arms & weapons. How dare they see fit to plant bombs and carry out suicide missions to end people’s lives.

How dare this author refer to the Buddhist clergy as ‘extremists’ let us remind the world that before the Westerners arrived there was not a single example of any community in conflict under the Sinhala Buddhist kings. If anyone says otherwise, we would like to challenge them to produce evidence where the Sinhala Buddhist kings have mistreated the minorities before 1505. All of the troubles we suffer today are outcomes of divide and rule policies implemented by colonial invaders so they could keep the people at each others throat while they pilfered and plundered the nation. When the Portuguese and Dutch were attacking the Muslims & Tamils it was our Sinhala Buddhist kings who sent troops to defend and protect them. Just don’t kill the majority community with your pen for media publicity.

So the author seems to be knowing how Parliament of Sri Lanka runs? Well its 19th November and still ‘Mahinda’ is not declared PM. Is this how Parliament works in the UK? How about telling the West’s pet the sitting PM to honor the spirit of the mandate and resign without making life difficult for everyone by refusing to do so. Is this gentlemanly politics and parliamentary decorum, taught by West, one wonders!

The author is incorrect because the people of North voted for Sarath Fonseka in 2010 and he was the immediate former army commander while a world campaign promoted notion that the Sri Lankan Army were war criminals. India’s Subramaniam Swamy once said he was confused how the Sri Lankan Tamils can call the Sri Lankan Army war criminals and at the same time go all out and vote for its army commander. Very puzzling in deed. The Tamils also voted for Maithripala Sirisena when he was fielded as common candidate in 2015 – so this is certainly not the first time that the Tamils have voted for a Sinhalese. Take the election result maps of 2010-2015 and 2019 to see for yourself. What is also puzzling is that Tamils voted for a Sinhalese while not giving even 2% of votes to a pro-LTTE Tamil candidate and relation of Prabakaran! What was the objective behind the vote?

It is good to jerk everyone’s memory here. LTTE was ruling a virtual defacto area of the North. The LTTE split Tamils into two – those on their side and those against them. Whoever was against LTTE faced the brunt of LTTE terror – the others obviously had it good. But LTTE did not share any of its $300m annual profits amongst the Tamil people. Areas that were eventually liberated were without electricity, had no proper roads, schools were abandoned and used as LTTE bunkers, children were kidnapped and turned into child soldiers – so was this fear not greater than the nameless and data-less scare tactics foreign journalists are carrying out? The development that North saw after elimination of LTTE was nothing anyone can deny credit to the Rajapakse administration. They had to take loans to do this development LTTE was making illegal profits annually but did not spend a dollar on the people it claimed to represent. Don’t’ forget 300,000 people were saved from LTTE during the final stages of the conflict – probably it is some of these that became the 5% that voted for Gotabaya Rajapakse at the Presidential Elections.

President Rajapakse confirmed and reconfirmed again during the oath taking that he is the President of all – those who voted for him and those who didn’t vote for him. Therefore, before bringing down the gavel before he has even started out on his journey as President, give him a chance to prove himself. He proved himself as Defense Secretary and steered a development drive in Colombo and outskirts to be even acknowledged internationally – therefore there is no reason to fear that he doesn’t have a plan as President. Obviously those who know he has a good plan to develop Sri Lanka are concerned because he will completely raise the bar to type of leadership that many are loathsome and jealous about which is probably one of the key reasons for their envy and jealousy. They just cannot measure up to him and therefore they want to character assassinate him as that is the only way they can.

Please don’t quote the same bankrupt and creditability-less so-called political activists who have no clue about the pulse of the people, no care about the general public and simply enjoy blabbering words in accents in 5 star hotels to the international arena only. These people are so out-of-place in any segment of society in Sri Lanka.

These so called activists have taken millions to promote ‘peace’ and it is a good time those that fund them began asking them to show what they have done for the money they have been given.

Give the people of Sri Lanka room to breathe and solve their own problems.

By interfering how many countries has the Western political power houses solved internal problems instead of making them worse.

Just give the new President some room. We are all watching too. Our concerns are more than your concerns. We also want to have a peaceful nation. We got dominion status in 1948, became a republic in 1972 the same year we faced an insurgency, then we had terrorism for 30 years together with another insurgency. We have not had a period of lull to enjoy any peace dividends. So please allow us room to sort out our matters on our own.