Killing us with laughter: President of TIGERLAND is appealing to Secretary Pompeo 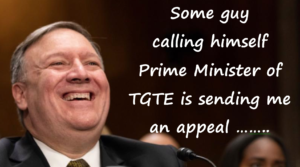 It is not every day that the US Secretary of State receives letters from unknown, undisclosed and unheard of countries and people calling themselves “Prime Minister “while living in the US, working in the US and claiming he is head of a utopian country while in the US. Maybe the US Secretary of State should fire a call & ask his staff to find out where the hell this so-called country is located. This must be a first time a Prime Minister of some utopian country is begging a Secretary for intervention.

What Mike Pompeo may like in the contents of that letter is the reference to China and an appeal not to allow Sri Lanka to become a vassal state of China. Not only that this “Prime Minister” is also bemoaning about the port of Hambantota.

As far as we know, there is no Prime Minister by this name in Sri Lanka but the name of his organization remains banned under UNSC Resolution 1373 and we also know that the LTTE and its paid-agents have been trying to work out a Kosovo type solution.

Our problem is why does someone living in US calling himself a “Prime Minister” without a country, want to carve out a piece of Sri Lanka when nobody in Sri Lanka is asking for such?

TGTE claims to be ‘democratically’ elected – Mr. Pompeo would well do to find out how the US can have a Prime Minister when the US is a Presidential system.

Has TGTE changed the US Constitution and made himself the Prime Minister?

Better check that out too, Mr. Pompeo.

Mr. Pompeo just to share a little secret with you —- no one in Sri Lanka especially the Tamils know who this guy is, you can bet 90% of the Tamils have not even seen or heard his name. You may want to explore presenting him to a psychiatrist for in his delusional state, not only is he calling himself a Prime Minister living in the US, but he’s sending you appeal letters too! Don’t know what he may send you next. Good to ensure all future letters are disinfected first.