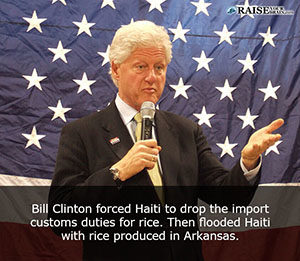 The US is said to have bombed 40 countries since 1945. US has close to 1000 military bases in more than 70 countries. There are over 165,000 active-duty personnel in more than 150 countries around the world. With the political regime change in Sri Lanka in 2015 the interference by US & West in Sri Lanka’s affairs has been phenomenal. In such a scenario we should in the least see how US treats countries where it interferes in & Sri Lanka has nothing to feel elated about. Let us take Haiti as just one example.

The US has worked for centuries to break Haiti. The US occupied and ruled Haiti by force from 1915 to 1934. From 1957 to 1986 Haiti was forced to live under US backed dictators “Papa Doc” and “Baby Doc” Duvlaier. In September 1994 US carried out Operation Uphold Democracy. 20,000 US troops landed in Haiti a country of just 10.9million. The ‘democracy’ operation was not surprisingly authorized by UNSC Resolution 940 on 31 July 1994. The US military operation provided a legislative amnesty for US military and UNOPPOSED arrival of US troops to Haiti (take note SL)

Jean-Bertrand Aristide was a Catholic father – elected President of Haiti in 1990, overthrown in1991, returned to power in 1994 by US & then removed from power by US in 2004. US is quite capable of installing, reinstalling & uninstalling leaders!

Presidential elections was held in 1995 but Aristide couldn’t run for another term because of the constitution & so René Préval contested & won & began privatizing government enterprises (no different to what is happening in Sri Lanka presently) Haiti people like Sri Lankan citizens protested but legislative changes were made despite protests. Despite millions given by US for elections – massive irregularities were a hallmark something Sri Lanka should be watching out for.

Aristides 2nd rule was marred by unprecedented corruptions that included embezzlement of public funds (no different to Bond Scam) these funds were challenged to foreign accounts & this paved the way for Aristides ultimate removal.

Aristide was made to resign by US in 2004 and Haiti’s Chief Justice Boniface Alexandre was sworn in as leader of a transitional government. Haiti army was disbanded and a civilian police force was created! UN peacekeeping forces were deployed from 1995 to 2000.

In 2006 US Congress passed a special trade preferences bill for Haiti. Increased US investment for Haiti was planned. US Govt was even providing $4m for Haiti elections! Calls to reform Haiti’s 1987 constitution also came. US & UN were also helping Haiti’s anti-corruption drive too reforming Haiti’s police, judiciary, and prison systems. These are all the areas that are now under foreign focus in Sri Lanka too.

Haiti is also one of 12 countries currently receiving legislative-strengthening assistance from the House Democracy Assistance Commission.

So why is US spending money on Haiti without spending on its own citizens? Crop dumping is one reason for America’s love for Haiti. In May 2016 US Govt shipped 500 metric tons of peanuts to Haiti (free) which affected over 150,000 peanut farmers in Haiti. How can farmers sell their peanuts which US was giving free?

When Haiti was made to liberalize trade in 1980s it was around the same US Food Security Act was passed and US dumped rice into Haiti which affected domestic production & dependence on IMF & World Bank debt trap. IMF conditions forced Haiti to reduce tariffs that protected Haitian rice & other products from imports & this destroyed Haitian farmers who could not compete with imported food prices. Haiti was the sugar growing capital of the Caribbean, it now imports sugar as well. Thirty years ago Haiti imported no rice; today, Haiti imports nearly all its rice.

US has forced Haiti into becoming the third largest world market for US rice. It was the classic, neo-liberal prescription. Sri Lanka was known as the granary of the East in ancient times – today we have been forced to import rice not because we cannot grow but because some want only importers to grow rich. NO one should forget the food riots & why that took place in Haiti & it is something Sri Lanka needs to be really mindful about.

Haiti’s cultural identity is also affected – Haiti is a den for sexual pleasures even sex vacations!  US based corporations have teamed up with Haitian elite to run sweatshops (probably already happening in Sri Lanka)

Haiti suffers from a worldwide collusion between US and European countries intent on making the tropical paradise suffer. The reason Haiti is impoverished is mostly America and France’s fault just as Portuguese – the Dutch & the British are responsible for post-independence Sri Lanka’s ills.

Those in Sri Lanka happy to import food may like to ask what happened to Jamaica – when it couldn’t afford to import food resulting in Jamaica having to return to small-scale farming!

Inspite of US & UN presence Haiti is still a bloody mess. So much for foreigners delivering democracy! Haitians took to the streets in protest against its governments – corruption, handling of economy & scores of other ills. These are all lessons for Sri Lanka https://www.nytimes.com/2018/11/23/world/americas/haiti-protests-unrest-instability.html

What does all this have to do with the Sena worm now affecting Sri Lanka’s crops in Anuradhapaura, Ampara, Kurunegala Polonnaruwa, Galgamuwa, Rajanganaya, Thambuttha and Gampola areas?

The Fall Army Worm (FAW) has the ability to destroy hundreds of acres of cultivation overnight and could affect over 180 species of crops including paddy, maize, sugarcane, green gram, other vegetables and fruits. What a prescription to destroy Sri Lanka’s agriculture!

The caterpillar, native to the Americas was, first reported in Africa in 2016 and has since spread to over 40 African countries and devastated thousands of acres of crops. Africa spends $35billion on importing food! It is believed a commercial airflight from America carried the worm to Africa – how did it enter Sri Lanka?

The installing of the present government & the pains the foreign players are taking to maintain the government in power speaks volumes of what is being rolled out in Sri Lanka will not be far different from that which was rolled out in Haiti or Kosovo. The neoliberal & geopolitical aspects will certainly be key areas & the renegotiations for the Millennium Challenge Corporations ‘economic corridor’ from Colombo Port to Trinco Port entails land to be vested in foreign control/ownership & is reason for the present government to award a US firm land surveying control together with desire to privatize all state land and part of that plot is to incrementally destroy Sri Lanka’s agriculture dependence to shift towards importation – it is why the PM repeats wanting to see our farmers in jeans & why former finance minister in February 2015 asked ‘why not BMW-owning farmers’. Modernizing agriculture means growing food not for our consumption but to export while we end up importing food we can easily grow. We are making our farmers jobless, importers rich & countries exporting richer!

In 2003 the present PM & then PM too said that his government was not going to spend on paddy. He proposes to reduce areas used for paddy cultivation & was going to bring legislation to use agriculture land for other crops. We are wondering whether this plan is now being shaped into reality with foreign support.