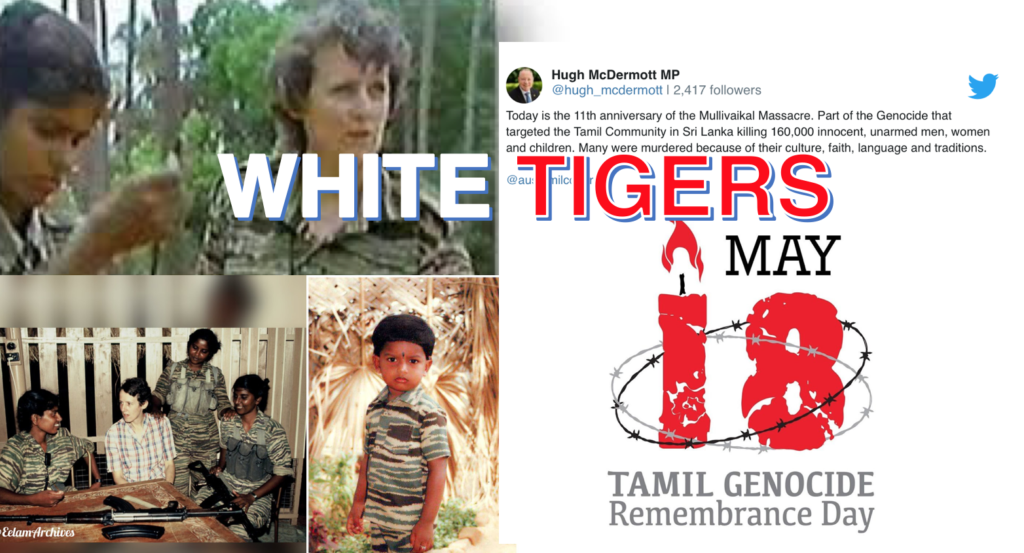 The Federal Government of Australia needs to take a firm stand on its elected representatives. While it should be the Federal Government on behalf of Australia that should make international statements, it is unacceptable when politicians representing small areas within a state issue disparaging statements of falsehood against a sovereign country. That Australia has failed to take action against its own citizen for aiding and abetting terror has ruined the lives of thousands of Tamil children, Australian Adele Ann Wilby trained as child soldiers from 1980s to 1999. That inaction, has resulted in many White Australians being enticed by remnants of the terrorist lobby to make inroads on foreign soil. McDermott is the latest recruit. Tamils who have left Sri Lanka to live in Australia must live as per Australian rules. They are not expected to be carrying out separatist agenda living on foreign shores. The Australian government should not encourage this either. LTTE lobby are masters at propaganda and have made a living by falsifying history and distortions. By influencing and weakening the Australian politicians, it will only be, a matter of time they may even re-write history of Australia and demand a separate state in Australia. Australia would know the amount of lies these economic migrants utter simply to leave Sri Lanka and live in Australia.

Adele Ann Wilby of Warragul, Gippsland, south-east of Melbourne was an Australian nurse who went on to marry British agent Anton Balasingham in 1978 who was LTTE terrorist movement’s chief advisor. This nurse having been taught to shoot by terrorist leader Prabakaran himself, went on to become LTTE’s main women & children’s trainer. From 1980s to 1999 Anton & Adele lived in Sri Lanka training women and children to kill & commit suicide biting a cyanide capsule.

Her own book authored in 1993 speaks of 3000 women Tigers – all of whom she had trained including the woman, who assassinated Rajiv Gandhi in 1991 in India.

It is to Australia’s credit that she and Anton B were refused entry to Australia to visit her family having been placed on the Australian Immigration Department watch list.

Why has Adele managed to evade prosecution – under Australia’s Foreign Incursions Act, Australian citizens are prohibited fighting in war wars.Adele B was training terrorists which included children as young as 10 years. No country can preach about human rights and rights of the child, if they ignore prosecuting this woman who inspite of being a nurse not only trained children to kill by shooting but taught them how to commit suicide by biting a cyanide capsule. Both criminal offences and violation of her oath as a nurse. Statements by children in the camps she trained, reveal she even ordered their torture and harassment upon those who tried to escape. Some children ended up dead or mentally ill. Surely, she must be made to account for these heinous crimes against innocent children turned into brutal child soldiers or killed if they refused to toe the line.

Fast forward to 2020 – we have another white ranting about Genocide Remembrance day. The term genocide has been turned into a joke by the Tamil diaspora who cannot produce names of the dead or even their skeletons but can spend on global tamashas for ‘Tamil Genocide Day’.

Firstly, Sri Lanka did not have a civil war, we had a terrorist conflict. The national army eliminated terrorists not Tamils. If McDermott wants he is welcome to commemorate Genocide of LTTE Terrorists. He may also like to speak to an authority on terrorism and rules of war, who will tell him the legality of a ‘no fire zone’ and its one-sided version in Sri Lanka given Sri Lank’s conflict was a Non-International Armed Conflict and LTTE was a non-state actor taking up arms against the State.

However, LTTE had no right to be among civilians and fire from among civilians. An army has every right to return fire against the enemy who fires (because the enemy should not be firing from civilians). If civilians were kept in harm’s way, the LTTE must be held responsibility.

There was no UN Panel of Expert Report – it was a UNSG personally commissioned report not mandated by the UNGA or UNSC or even tabled in the UNGA, UNSC or UNHRC. The Panel did not say that 40,000 were killed. McDermotte should first read the report. Who is writing these lies for him and why is he parroting a script without verifying if the details are true or not?

Anyone can estimate dead – but they need to establish the dead by identity and prove they were killed and by whom. Without such carrying out smear campaigns is just not done.

When LTTE was defeated in May 2009, it was freedom for no one else but the child soldier. Where were all the entities sponsoring McDermott when LTTE was kidnapping children from their parents and turning them into child soldiers? Did they carry out a single campaign on behalf of these kidnapped children. Today, they hold tamashas all over the world but did they hold a tamasha to free a single Tamil child from being turned into a killer? NO

It was none other than the Sri Lanka Army that rescued close to 300,000 Tamils kept as hostages and human shields. Hugh McDermott should stick to facts not fiction.

McDermott can be friends with anyone he likes but his public position should not be abused to tarnish an entire country and a community with falsehoods and slander.

With only 73,161 Tamils living in Australia (which includes Tamils from India and other parts of Asia) on what grounds is McDermott attempting to make Tamil a language of study in the Higher School Certificate in his electorate of Prospect which has just 96 Tamils?

What else would McDermott next resort to – putting up statues of Prabakaran and his LTTE combatants as the LTTE front he is so closely associated with was proscribed as a LTTE front in 2014 and removed with no valid reason in 2015. McDermott may soon be sponsored to change the names of Australian towns to Tamil names next May 18!

Is McDermott’s Genocide Remembrance Day speech on behalf of 591 Tamils from Pendle Hill, 1073 Tamils in Wentworthville, 760 Tamils in Girraween, 853 Tamils in Toongabbie or only 96 Tamils in Prospect.

Why is McDermott not speaking on behalf of the other communities living in Prospect the town he is elected to represent? There are 217 Indians / 143 from Philippines / 142 from Fiji & 99 from Malta living in Prospect.

We hope the Australian Federal Government looks into these MPs of small towns who are obviously been manipulated not to work on behalf of communities in Australia but making statements beyond their mandate. If Australia has any issues, we expect it to be taken up across diplomatic channels and at government levels, not via social media and bogus Genocide Day tamashas.

Well, we cannot expect much from McDermott given the scandals he has been embroiled in.

2017 – inviting a former labor leader who had been critical of moder Labor policies as guest for a fundraising dinner.

2018 – dismissing 3 employees one who accused him of sexual misconduct.