MOURNING THE DEAD: A Soldier & a terrorist can never be equal 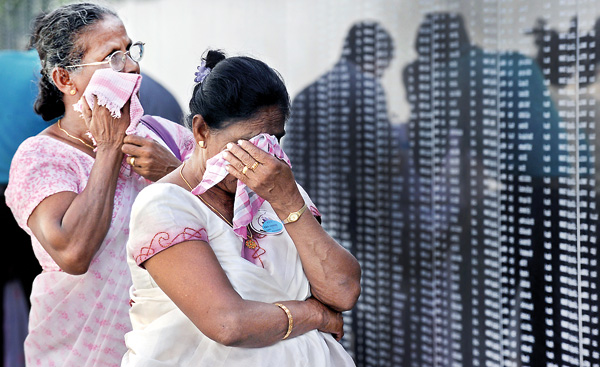 A soldier of a National Army cannot be put on par with terrorist. Similarly, a mother of a solider cannot be put on par with a mother of a terrorist too. A war widow is the wife of a soldier laying down his life for the Nation. Wives of terrorists are not war widows (a different term should be created for them) But, they all have a right to mourn the deaths of their family members. The issue is with how that mourning is done.

How is a soldier different to a terrorist? 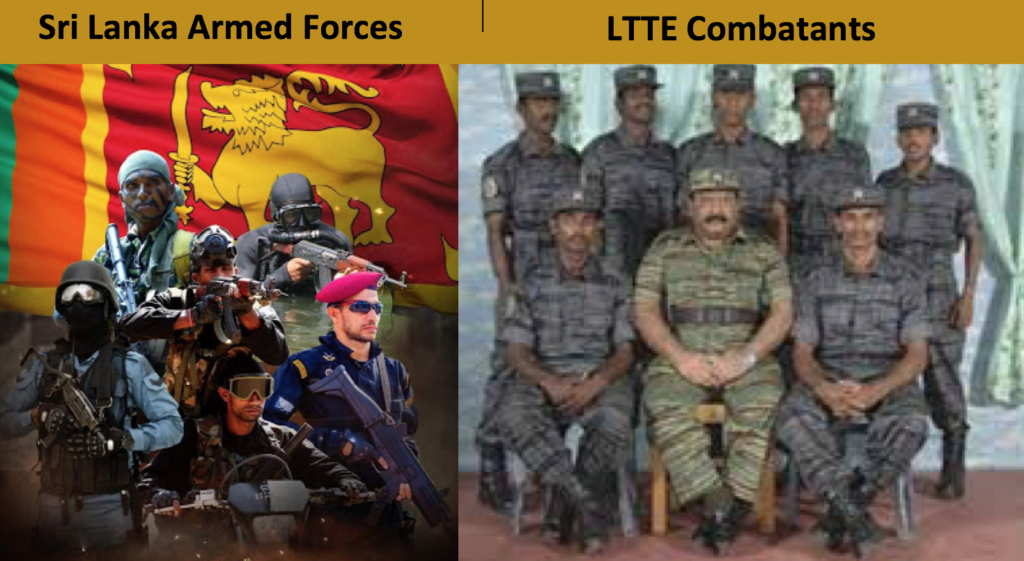 A soldier is a member of the country’s National Army, responsible for defending the sovereignty and territorial integrity of the Nation & its people. A soldier who joins the Armed Forces or Police are people who represent the nation’s sovereignty and territorial integrity. The soldier going to battle with terrorists face many obstacles. There may be 101 war manuals but none of them understands how a soldier can follow the rules when a terrorist in civilian clothing is about to shoot him dead. But the manual expects him to determine before returning fire whether the terrorist is actually a civilian or a terrorist. By the time the soldier decides, he has been killed. No soldier is commanded to kill unarmed citizens. But every army does have its miscreants.

How is a terrorist different to a soldier?

Whatever reasons they may give to justify taking up arms, the terrorists are violating the rules that govern the state and invariably they end up attempting to destroy the nation and not defend it. Terrorists also end up killing the citizens. Yes, a terrorist is a citizen and a child of the country, but that child and citizen premeditatedly planned and killed hundreds and thousands of innocent and unarmed civilians. These killings were by command orders and followed by the terrorists. This is why LTTE has killed so many innocent civilians.

How is a soldier mother different to a mother of a terrorist? 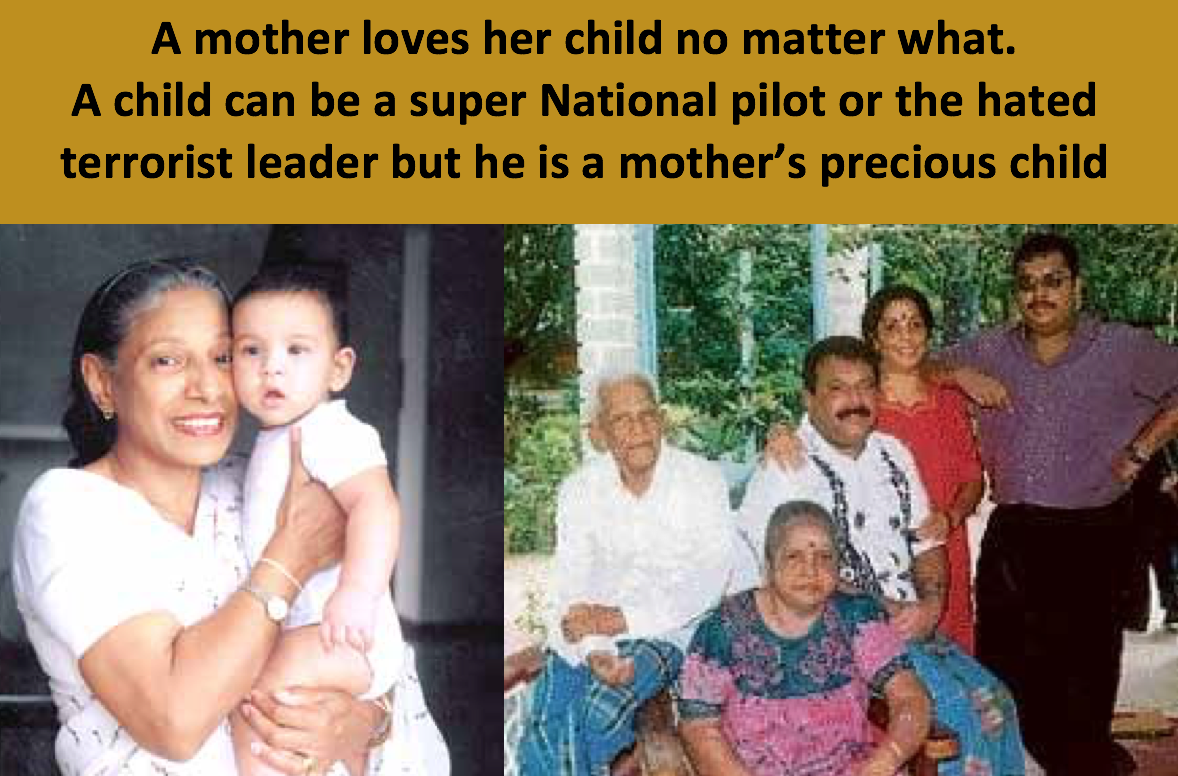 There is no difference in the spoon of love fed from a mother to her child. A mother’s love for her child has no titles. In all probability the terrorist mother may be just as proud of her terrorist son as the pride of the soldier mother. Only a mother knows the feeling she has for her child. But there are exceptions to this too. There may be many a terrorist mother who are sad at what her child has become, knowing he has killed many innocent people. But, in death, her child remains still special for her.

When Prabakaran’s parents were ailing in their 80s and were scorned by Tamils who identified them in the refugee camp after the conflict ended, it was the soldier sons who rescued them and looked after them. None of Prabakaran’s brother and sisters wanted to come and visit their parents before their deaths and none arrived even for their funerals. It was the Sri Lankan soldiers who looked after the parents of the terrorist. 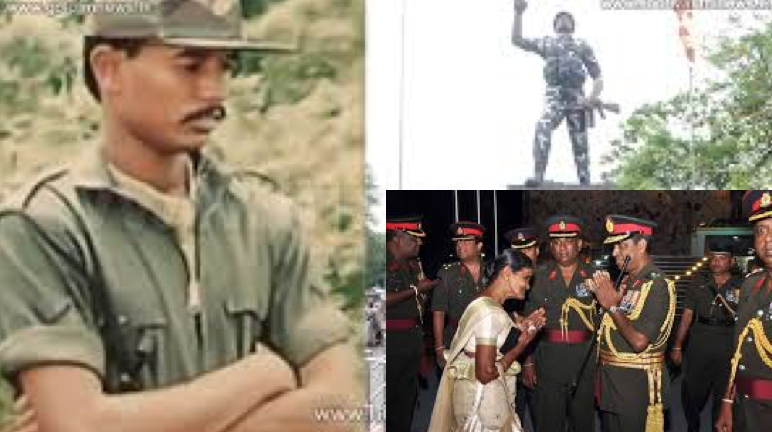 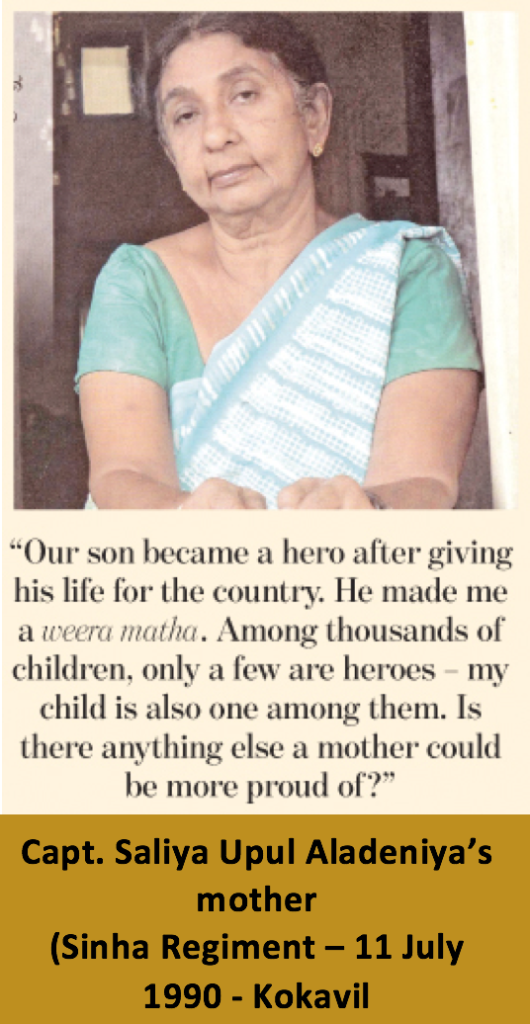 The soldier mothers produced brave men who were ready to sacrifice their life for the country and not a cause. These mothers had patriotism into the minds of their sons who came forward when brave men were needed to defend the nation. These brave men and their parents will always have a special place etched in the history. Not many mothers have produced brave men and women who have come forward to defend the nation in its darkest hour.

How is a war widow different to a widow of a LTTE terrorist?

International definition of a war widow is given to the wife of a dead soldier and that definition cannot be diluted by attaching it to the wife of a terrorist. The importance of this is because many a LTTE combatant were married to fellow combatants. Therefore, it is wrong to call a combatant widow as a war widow especially because many of the ‘dead & missing’ LTTE wives are being referred to as war widows. Wives of terrorists cannot be war widows. Call them some other name but not war widows. We see a concerted effort by mischief making NGOs purposely attempting to bring soldier war widows on par with terrorist war widows. This cannot be allowed. 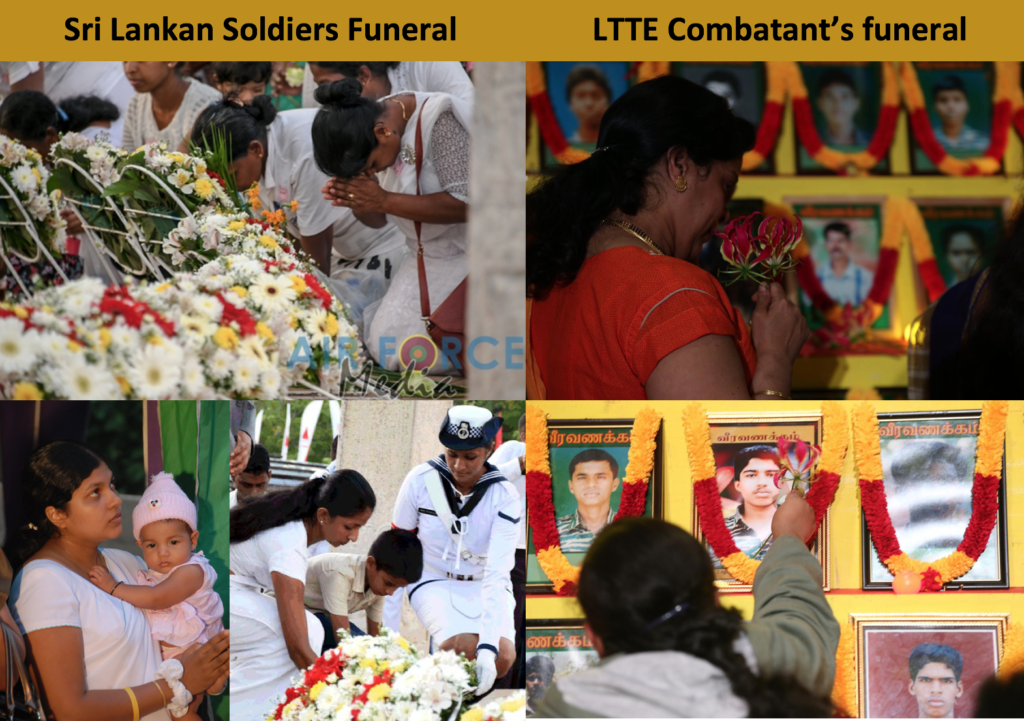 Mrs. Vajira Perera did not live to mourn her husband.

Maj. Gen. Janaka Perera tipped to lead UNP and take over UNP leadership was assassinated by LTTE in October 2008.

While the love of a wife towards her husband makes no difference if he is a terrorist or soldier. When international laws clearly differentiate a national army from armed non-state actors – then the references to their wives must apply too. The LTTE (men, women and child soldiers) killed Sinhalese & Muslims – what are we to name the wives of the men killed by LTTE?

The term war widows must only be for wives of dead soldiers. 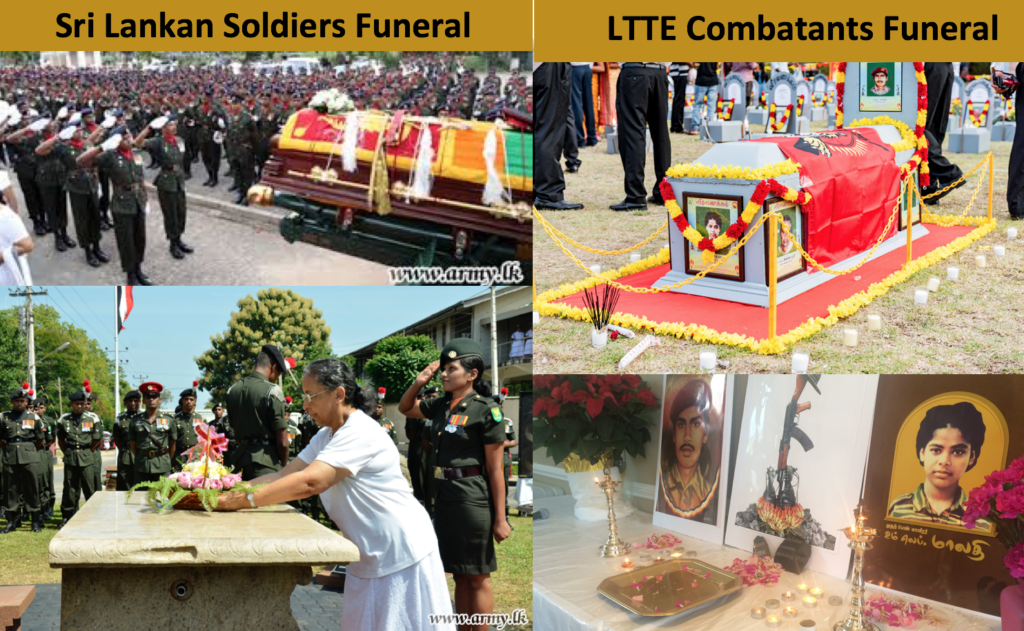 Any mother, wife, child has every right to mourn their dead and we do not even mind anyone mourning the LTTE dead but when it is organized as a major event with all the paraphernalia associated with LTTE and these funerals are used to continue the quest of the failed objective of separating Sri Lanka, then we have every right to object and demand its prohibition.

When mothers, wives, children & others mourn LTTE terrorists on the pretext of mourning ‘civilians’ and use LTTE symbols and emblems and hold tamashas across the world claiming ‘genocide’ and what not, then we seriously have a problem and we have every right to raise objection to it.

This is no natural or spontaneous morning but a well-planned and well-funded program to advance a political agenda. In reality this has nothing to do with mourning only publicity. 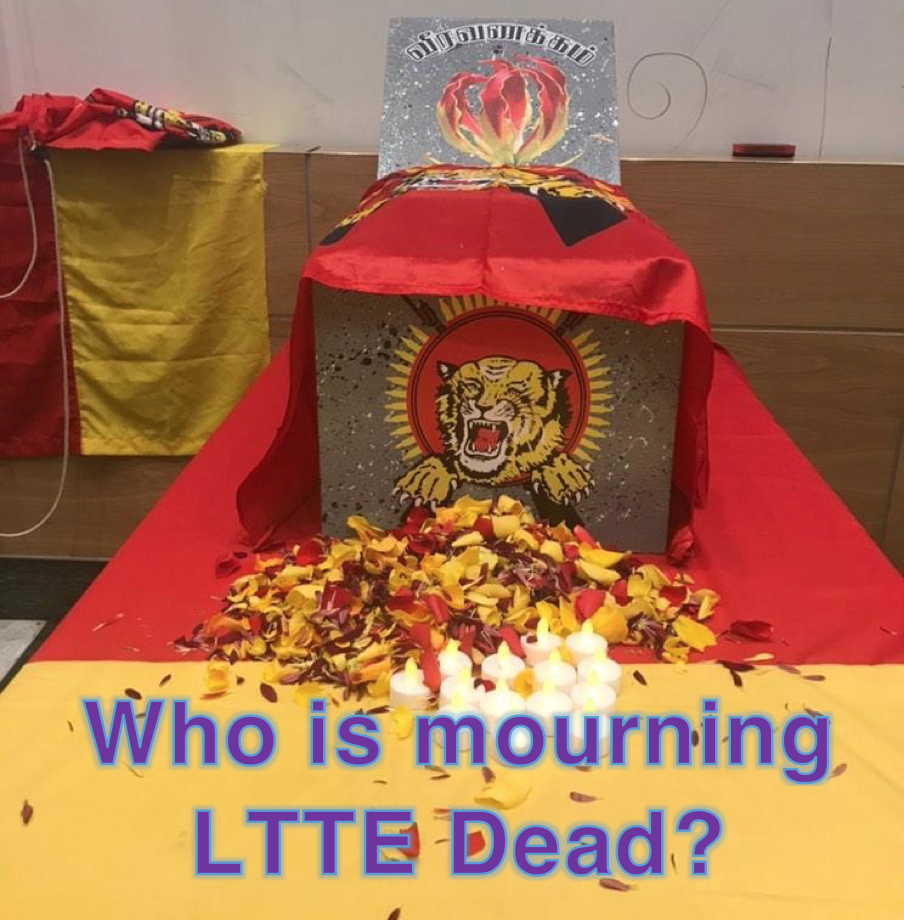 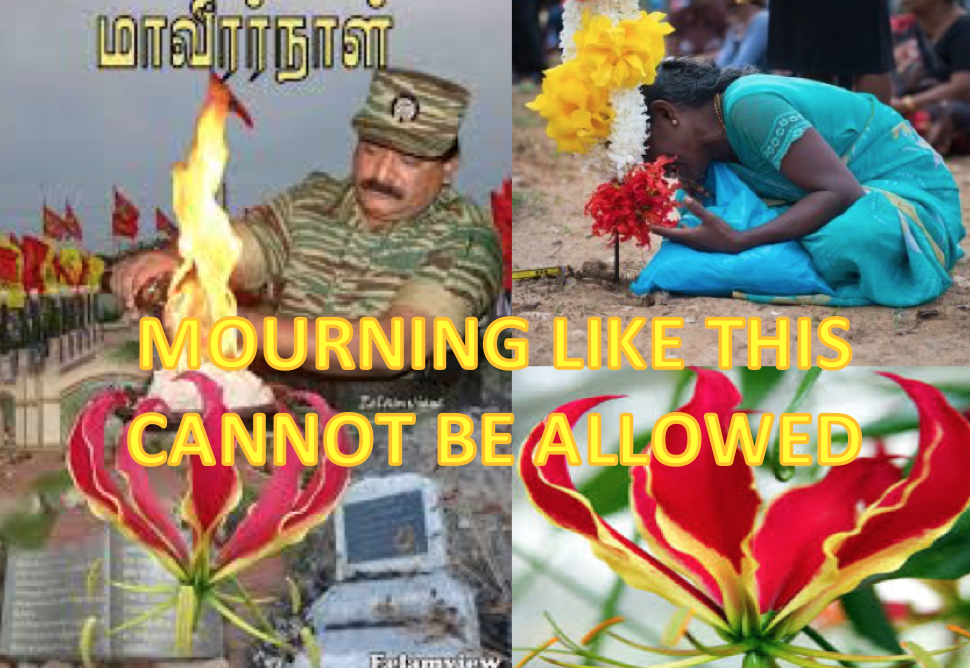 In short, the message to any LTTE family member is – mourn your dead, but mourn them in private. There is no requirement for huge rallies, demonstrations, mass protests, huge concerts, exhibitions, LTTE posters, flags, decorations, LTTE flowers, emblems, LTTE cut outs and what not to mourn one’s son, husband or father.