Undoubtedly media plays a crucial role in manipulating people’s minds. Media headed by the wrong people can have detrimental results on a populace. We know the lengths LTTE terrorists took fake propaganda. It’s an uphill task to reverse the lies people had been fed. Those who sit in media dictate what people think & often are the instruments that are responsible for creating the reactions while also playing a biased role of judge & jury after stirring the pot of trouble via media. There is enough evidence to showcase how even terrorists use media to brainwash people’s minds with content. Action can only be taken legally & legislatively against such – the question is will Parliament & will the courts do so? Freedom of speech ends when it violates the freedoms of others. No columnist or cartoonist can profess to be the crusader or messiah and deem their right to criticize and ridicule. 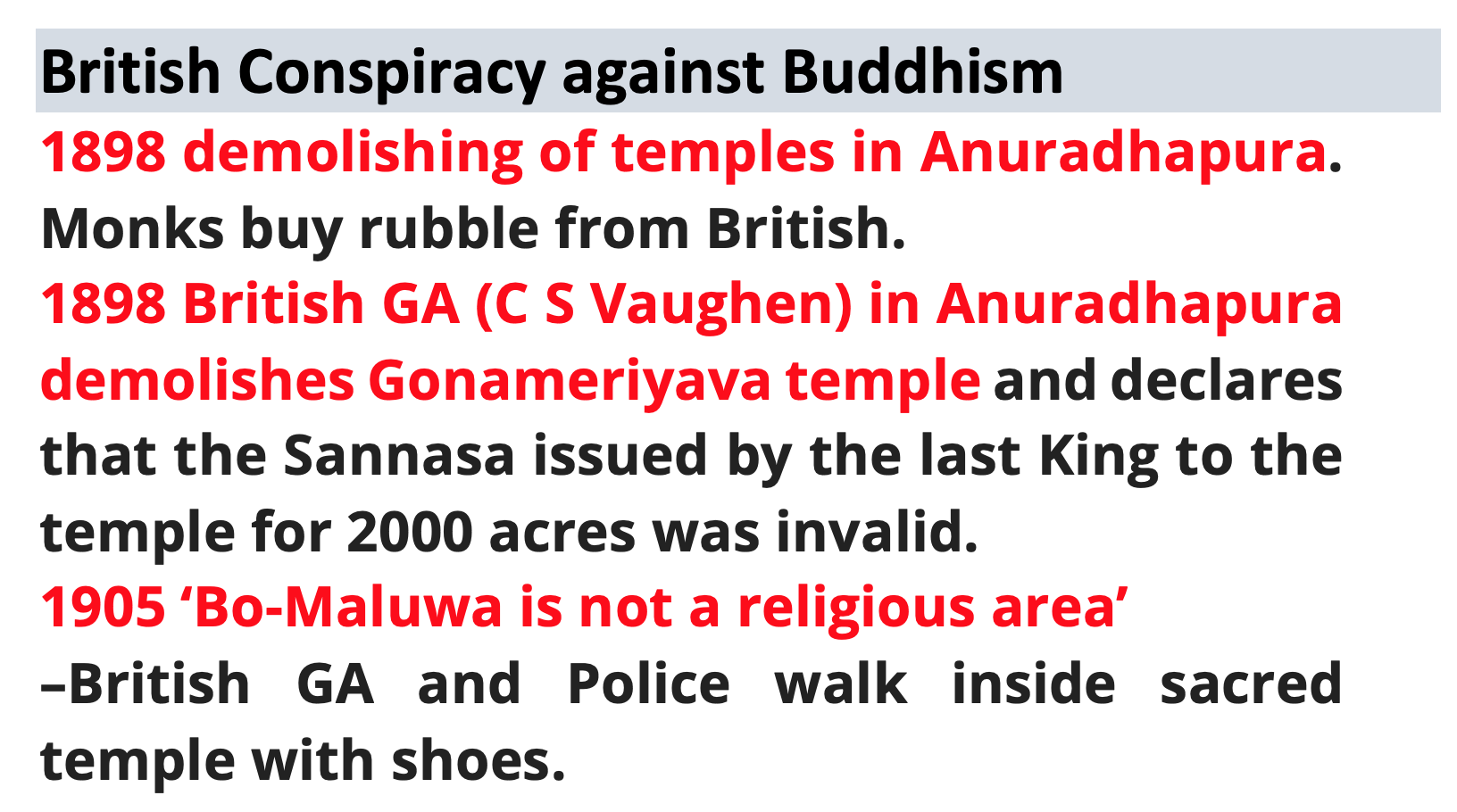 In Sri Lanka, it is fashionable to project the notion that Sinhala Buddhists are the cause for all ills. This is impregnated into the minds of the people since 1505 when western colonial invaders deemed their enemy was Sinhala Buddhists. Anyone who wished to take over the island viewed those that defended it as their enemy. The project to vilify Buddhists/Buddhism was no secret and British Colonial records mince no words.

The 1964 Press Commission Report reconfirms that the project of the colonial British was still in place and continuing unabated. Therefore, we cannot forget the historical role now outsourced to kalu suddas and link the current vilifications using media with that colonial project. 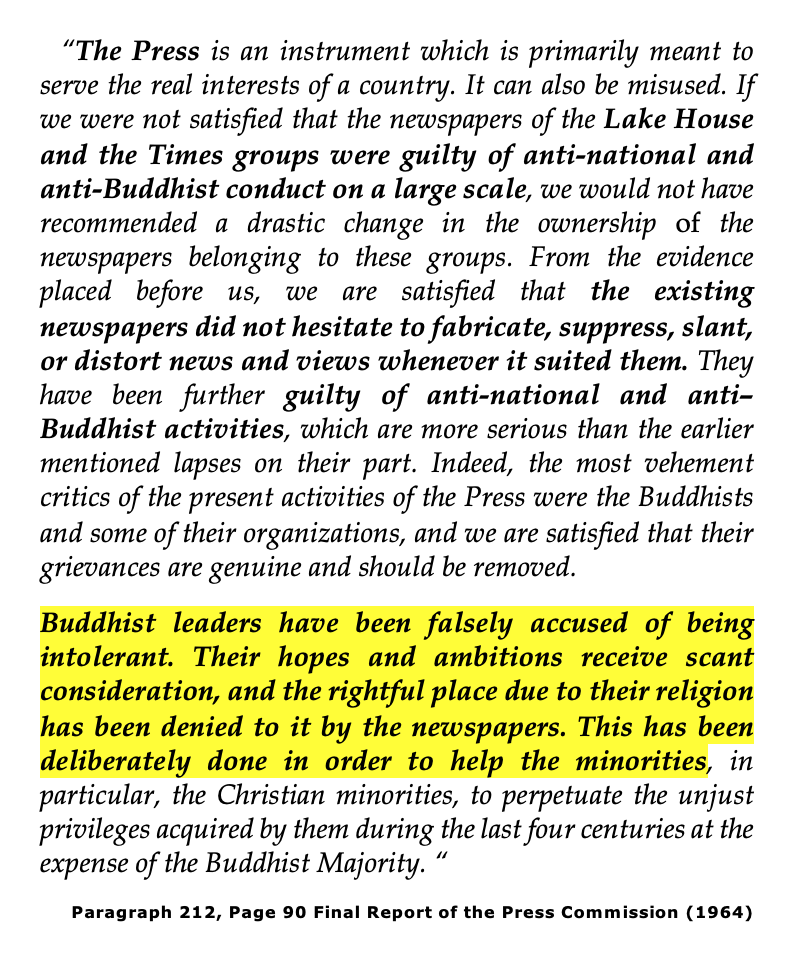 There is another factor that we cannot forget either. While this is not a critique of any religion but the bitter truth is that both Christianity & Islam are expansionist faiths using the sword to convert people & take over their lands. There are ample examples of their bloodied past. Buddhism however spread as far as present day Iran & as far as Indonesia without a single sword or forced conversion. While the New Testament removed much of the violent texts in the Old Testament, the Quran still has verses to eliminate disbelievers/kafirs & permits the doctrine of taqiyyah (approval to use pretense) until the ultimate goal is achieved.

While multiculturalism became a curse to citizens of western countries where they shockingly watched their ‘cultures’ become ‘multiculturalzed’ the former colonies were being lined up to have their civilizational cultures be eliminated incrementally as well. The quest was to denigrate the key stumbling block that prevented countries & their citizens being historically uprooted & being brainwashed to dislocate themselves of their cultural/heritage & turned into modern hippies/gypsies..

This goal was tasked to NGOs & Media outlets. Faiths which were in majority, would use political/social/religious/economic pressures to throw their weight behind their “people” who were a minority amongst the majority.

A content analysis of the Sri Lankan print media & the selected regular columnists and their pet topics will showcase the systematic vilification at play. Media must be representative of the country’s demography – but in Sri Lanka it is not so & this must be changed to usher fair play.

There is no doubt that all faiths have mischief makers in robes who are not what we expect them to be. But it is not for us or cartoonists to decide or dictate how they should function.

The present 3 cartoons are hurtful because these same cartoonists pick only on Buddhists/Buddhism. Perhaps they fear what happened to the Dutch cartoonist so their easy prey is Buddhists.

But, let them never forget that it was only during the Buddhist reign that all religions thrived without any discrimination. Buddhists have had to flee for their lives where they are the minority – Maldives even expunged the Buddhist history of Maldives. So no one can say Buddhism or Buddhists have discriminated minorities. Buddhists have had their theros killed, we have had the oldest library in the world brought to cinders, we have lost terrain and territory, the magnificent structures built by people to show their veneration to Buddha was demolished and vandalized. So don’t preach to us about Buddhists being ‘militant’ because those that do so are only trying to hide their criminal past. What was done to Buddhists comes nowhere near the media-propped lies being spread against Buddhists/Buddhism who are only reacting to the actions against them. Media conveniently diverts world attention to the reaction & away from the actions that resulted in the reactions. Media hardly criticizes the actions as they do the reactions!

If anyone has any issue with any thero, by all means express these views directly at the thero with supporting evidence & facts, but to dress a dogs bone in a robe is simply to use the chance to denigrate Buddhists/Buddhism & this is in bad taste knowing that Buddhists worship not the wearer of the robe but the robe because it represents the Buddha in our eyes.

This was nothing but intentional hate speech.

The media entities and editors preach about discrimination and hate speech and are ever ready to dispatch dossiers overseas but when they commit the crime their mouthpieces attempt to justify by saying ‘Buddhists should not react because they have to give up everything & go to nirvana’.People seem to have been given a wrong interpretation of Buddhism – nowhere does it say Buddhists cannot defend what is theirs, nowhere does it say Buddhists have to walk away when their lands or sacred sites are being wrongfully taken over. Unfortunately, Buddhists are being fed these notions by the expansionists because the ultimate goal of the expansionists remain alive and they do not wish Buddhists to defend what is theirs.

In a world that preaches need for action against hate speech – it may be good to start first with the religious texts that are the root cause of the radicalism and terrorism that prevails and which are being subtly promoted by media personnel.

These cartoons are hate speech because they are directed only at Buddhists. Will these cartoonists draw similar ones for Islam/Christians? Doubt so.

So as hate speech, this is a violation of not only the 120/296 of penal code but spreading hatred falls under the PTA as well as ICCPR 56 of 2007. The Government & the Judiciary can certainly take action and should while the Buddhist associations and the Maha Sangha must make their objections. The Press Complaints Commission must not simply wait for complaints but should also be analyzing the content and vilifications themselves. We await action by the Buddha Sasana Ministry unless pressures are used not to – which is probably the outcome! So it is an advance prediction of the outcome!

The Government is given a mandate by the people to ensure unity & peace, the governments mandate is not given to newspapers, media, columnists or cartoonists to vilify the majority with impunity

Freedoms and rights do not have a carte blanch & are not meant to target only a segment community ad nauseam.Freedoms and rights STOPS where it infringes the freedoms and rights of others. With all the slogans and tamashas woven around freedoms and rights – what no one can deny is that pre-1505 era all of Sri Lanka’s communities lived in peace, without any differences & people were not divided as majority or minority. All these nuances were introduced by colonials with hidden agendas & part of their divide & rule now outsourced to the kalu suddas.