Why does Sri Lanka go to Geneva to get bashed annually at UNHRC? 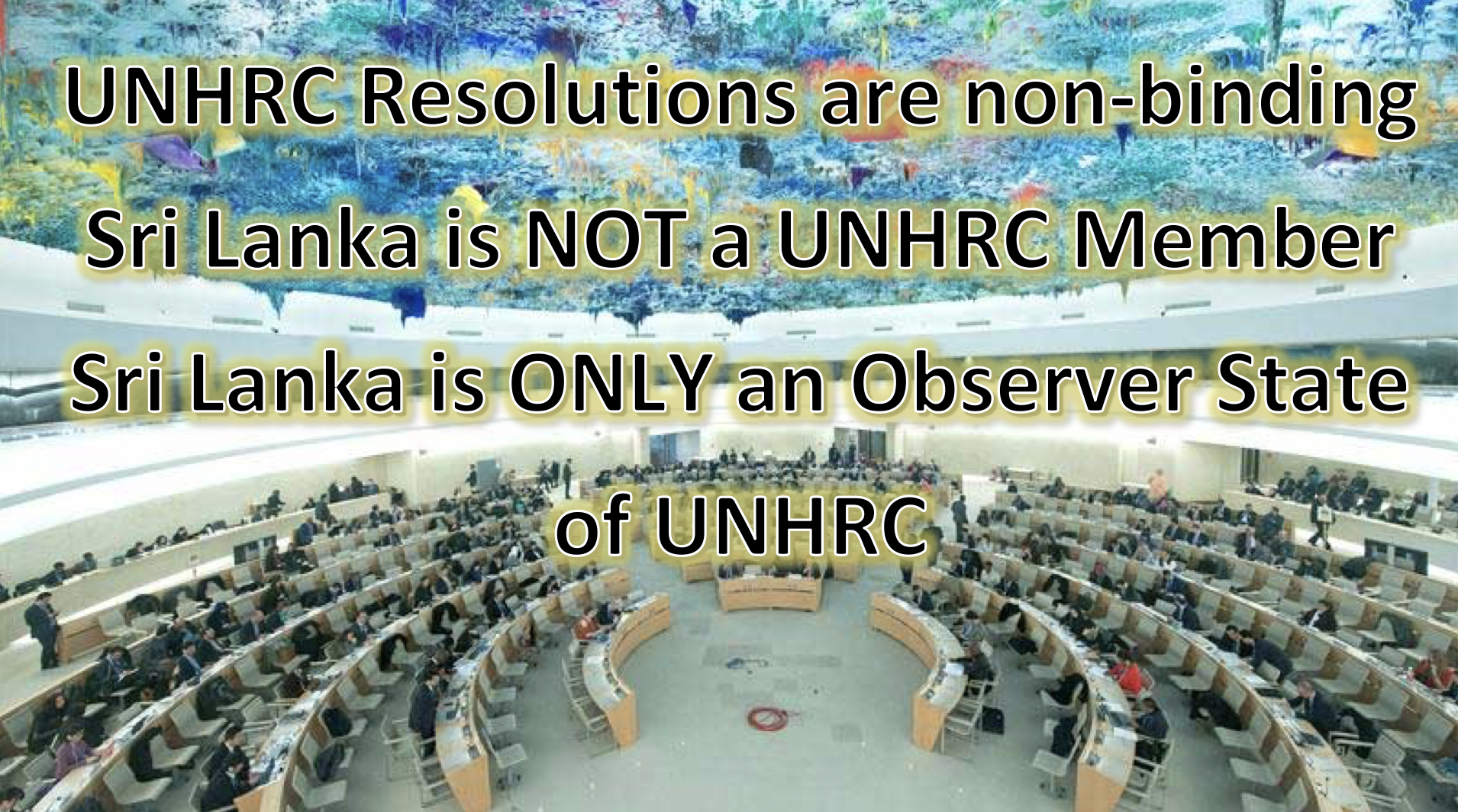 The UNHRC comprises 47 member states. The UNHRC members are elected by the General Assembly for 3 years. The UN General Assembly comprises 193 Member States of which Sri Lanka is one. Sri Lanka is not a MEMBER of UNHRC. Sri Lanka is merely an OBSERVER state. As Sri Lanka is not a member, Sri Lanka does not have voting rights. UNHRC Resolutions are non-binding. So if Sri Lanka is only an Observer State & UNHRC Resolutions are non-binding, why are we wasting money to send a delegation to get humiliated in Geneva? All that ends up happening is the Minister in charge makes a political talk meant to make him a hero back home. Political talk has no action and UNHRC recommendations get tied to numerous conditions for handouts given by the countries that voted against Sri Lanka. This annual show is nothing but a bargaining podium where allegations get drummed & these get plugged into conditions for aid, investment & other coercions for their geopolitical advantage. Sri Lanka should just allow UNHRC to pass resolutions & not send any delegation except to get our representative in Geneva to read the official position of Sri Lanka. Attending or not attending makes no difference in Geneva!

Let us first look at the present (2022 October) Resolution.

20 states voted in favor of Resolution, 7 voted against and 20 abstained.

Generally, abstentions are tilted against a resolution rather than for it.

However, in a 47 Member state when less than half of the Membership have voted for the resolution and more than half are on the other side (against + abstentions) how can UNHRC pass such a resolution? This itself highlights the bias of the UNHRC

Abstaining from voting for or against Resolution:

What most people would have forgotten is that the initial resolution was about the last 3 months of the conflict, but successive resolutions went on to take topics not related to the conflict and transgressed the UN Charter itself by interfering into the internal affairs of Sri Lanka. Why doesn’t the UNHRC take these non-related topics at the Universal Periodic Review sessions held annually?

It was obvious that the UNHRC however much it bragged & boasted had no evidence beyond doubt and certainly no credible evidence to declare Sri Lanka committed war crimes.

The architects & supporters of the resolutions have found common ground on several fronts. Some wish to take revenge for defeating LTTE whom they had invested heavily on. Some see the resolutions as a golden opportunity to advance their diplomatic agendas.

The GoSL should have immediately objected and refused to cooperate.

What is also noteworthy about the resolutions against Sri Lanka, was that the OHCHR was investigating FOR THE FIRST TIME a country that had ended a conflict. This was creating a precedent and would be applicable to other countries thereafter.

If so, this begs to ask why the OHCHR investigation was covering only 1/3 of the entire conflict? How fair was this on the victims?

There was also a question of whether the OHCHR Head had a mandate to investigate a country?  The more pressing question was how a personally commissioned report could be the basis of successive resolutions and be quoted by the OHCHR head. The legality of this is still not answered.

So annually, the Sri Lankan team pays to travel & get battered in Geneva & returns expecting a hero’s welcome simply because the Minister makes a political talk & that is supposed to set off the intrusive resolutions that have been passed. This charade must stop.

It is clear from the manner of voting that the powerful nations simply have to dial numbers & give instructions on how they should vote. If Sri Lanka has friends it is the friends that have consistently voted for Sri Lanka – these countries are China, Cuba, Pakistan, Russia and we must be grateful to Eritrea, Uzbekistan, Bolivia and Venezuela for voting in 2022. It is time Sri Lanka not only know who its friends are but ensure they are shown gratitude and given a greater role in Sri Lanka’s development without going behind unrequited love of the oppressors (voted against/abstained)!