Minister Dinesh Gunawardena – What is your strategy to defend Sri Lanka & its Armed Forces in UNHRC? 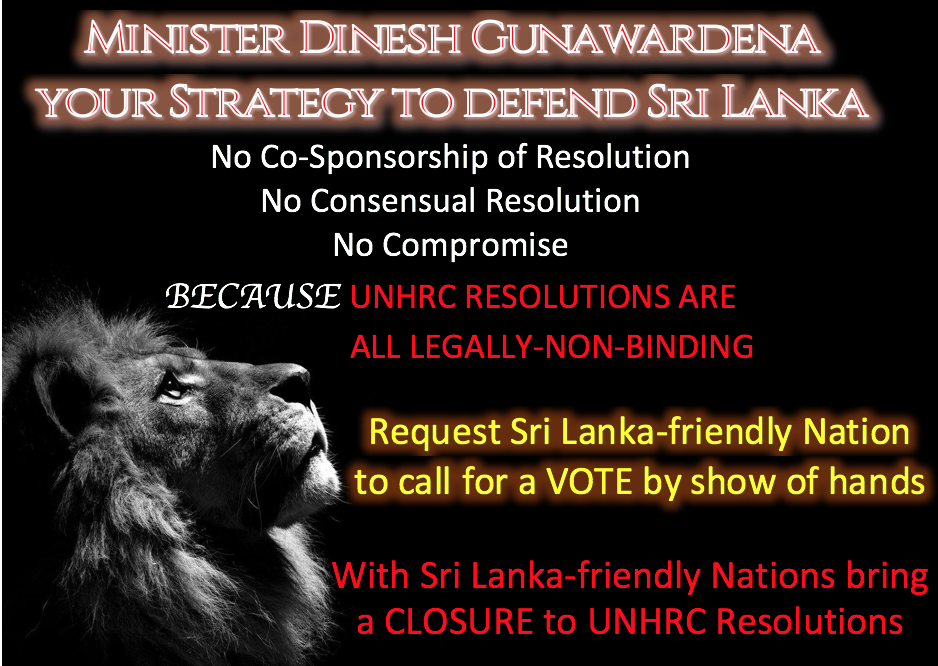 The regime change in 2015 brought to power a treacherous team that co-sponsored an intrusive UNHRC Resolution though legally non-binding, agreeing to do changes to internal mechanisms advantageous to the sponsors of the Resolution, to Geneva UNHRC Office and the lobby groups funding the entire exercise. The traitors were democratically replaced by the People voting a nationalist government expecting them to UNDO the wrongs by the yahapalana government. Thus, it was welcome news that the new Government had informed Geneva that it rejected the co-sponsorship. This in turn, meant that the foreign ministry headed by Hon. Dinesh Gunawardena known as the son of the “Borulugoda Sinhaya (Lion)” Philip Gunawardena would not only devise a strategy to protect the national sovereignty of Sri Lanka but reinforce the integrity of the nation armed forces amongst the international community. We would like to know what the Foreign Ministry has strategized to meet these objectives.

Steps Sri Lanka are aware of

Throughout 30 years scores of real civilians were targeted and killed by LTTE. Harping on a guestimate figure of 40,000 (which cannot be substantiated with even names of dead) while ignoring 7721 collateral dead given by the UN Country Team speaks volumes of bias by UNHRC. The former UNHRC Head who triggered the resolutions against Sri Lanka is now speaking at pro-LTTE events!

What is more important is that having ended 30 years of LTTE terror, saved 300,000 even at the cost of 7721 dead, Sri Lanka also gave a presidential pardon to 594 child soldiers considering them victims and resettled all of the IDPs within a short span of time when the UN and its entities are still struggling to settle MILLIONS of IDPs from illegal invasions and interventions.

In 12 years Sri Lanka has faced no LTTE terror, no LTTE assassinations and no LTTE suicide missions. UNHRC cannot demand justice for only one community ignoring justice to victims of LTTE. LTTE killed Sinhalese-Tamils-Muslims and even foreigners!

Sri Lanka must be judged against International humanitarian laws and not human rights which is the only mandate that the UNHRC has. International terrorism experts in IHL cleared Sri Lanka of any intentional IHL violations and these reports must be tabled with the Declaration of Closure.

Use the UNHRC for better human rights issues rather than as a witch hunt against Sri Lanka for ending terror.

Dinesh Gunawardena, the nationalist foreign minister, we expect this nationalist government to bring Geneva Resolutions to a Closure especially when these Resolutions are legally non-binding and we have no reason to be begging countries for their support in 2021 when they have a history of sponsoring the resolution or abstaining from voting for Sri Lanka. This category of countries are really no friends of Sri Lanka.

Minister Dinesh Gunawardena we expect your Ministry to defend Sri Lanka & the National Armed Forces – how you do it is not our concern, that it must be done without compromising our sovereignty or territorial integrity & national assets/resoruces is what all citizens now demand!