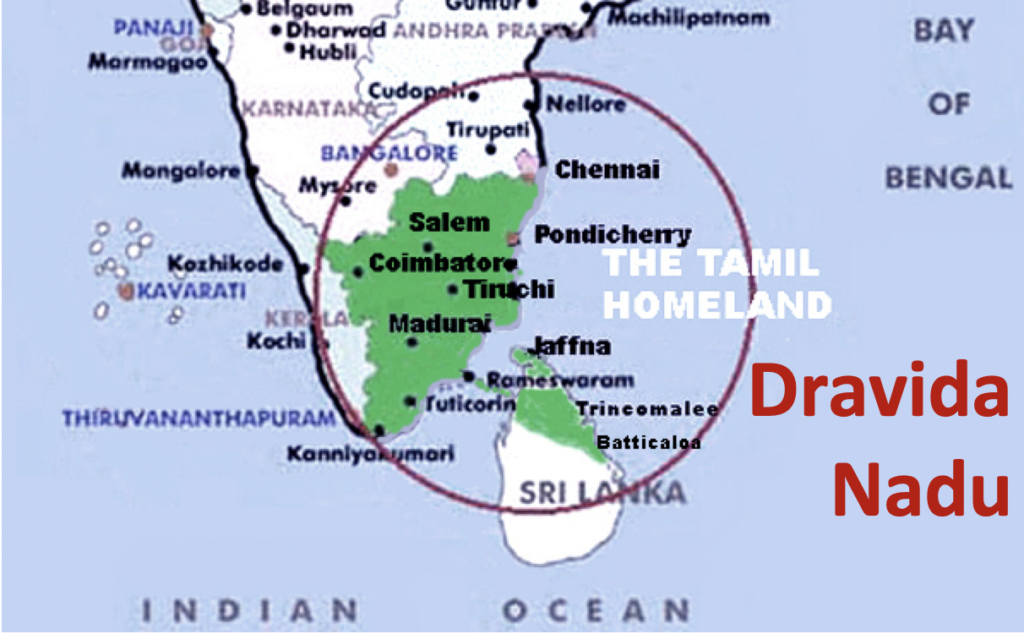 While India may have begun the initial training and arming of LTTE towards late 1970s, there is another player that often escapes the radar of accountability. Sri Lanka’s governments have failed to identify the crux of the problem and has been caught in a web of its own making primarily due to its failure to make public what Sri Lanka was dealing with & deny what Sri Lanka was being accused of.  Sri Lanka’s conflict was not ethnic. Sri Lanka was dealing with separatism by terrorism. Is Tamil Nadu’s “Dravidian Movement & Chelvanayagam’s Greater Dravida Nadu’ connecting India & Sri Lanka (pan-Christian satellite state) a Western-Church geopolitical master plan? Is Tamil Eelam for Tamil Christians/Catholics only & not for Tamil Hindus? Was LTTE simply a toy & LTTE fronts the mercenary outfits being used for this plan? Did India play dual role – acting in cahoot with this plan but using it as a cover to protect its own turf & build its own counter defenses primarily due to the failure of Sri Lankas decision makers to see through the webs being weaved & adopt counter measures for its own security.

LTTE’s London office was opened by a Bishop & not a Hindu priest.

Was this office sponsored by the World Council of Churches?

Why is Prabakaran & its top rankers always seen embracing & posing with Catholic priests?

Why is the head of the overseas LTTE fronts a Catholic priest? Father Emmanuel?

He called LTTE the ‘soldiers of Christ”

He called LTTE suicide bombers ‘martyrs of the Catholic Church”

He called himself ‘Moses’

Why does he speak with the LTTE flat on the podium?

Why was LTTE’s Voice of Tigers tied up with Radio Veritas, a Catholic broadcasting station run by the Asian Catholic Bishops Conference.

Why did Voice of Tigers have a ‘coordinating office’ inside St. Sebastians Church in Mallavi, Vanni? This office was also opened by Bishop Rayyapu Joseph. He claimed Sri Lankan Forces killed 200,000 Tamils!

Why did the World Council of Churches promote concept of traditional homeland theory in 1994 in UNHRC.

Why did former Tamil Nadu Chief Minister Jayalalitha repeal the anti-conversion law in 2004 implemented by her own Govt? Did the receipt of the Golden Star for Dignity & Honor awarded by a Christian body (International Human Rights Defense Committee) funded by USAID have anything to do with repeal?

Sri Lanka’s National Christian Council is affiliated to WCC. The National Peace Council headed by Jehan Perera is established by the NCC.

What did the Church do when LTTE ‘abducted’ 16 children from an ‘orphanage’ run by the Church in Dharmapuram?

An American Jesuit priest – Father Miller – disclosed to U.S. Embassy officers in Colombo that the orphanages where the LTTE recruited its child soldiers were run by churches.

Priests who were inside the No Fire Zone in Mullaitivu have also been accused of helping LTTE by forcibly recruiting hundreds of underaged children. Some 600 children had been sent to a Catholic Church located iN Walayarmadam – LTTE had arrived at this Church on 24 March 2009 and taken the children.

Why does the Church clergy train youth to enact cultural events building resentment against Sri Lanka – 3 such dramas held on 16 Dec 2012 by children from Jaffna Central College, Hindu College & Vembadi Girls College enacted Eelam cause as not being over.

Why would Catholic clery from Vavuniya, Mannar, Kilinochchi, Mullaitivu and Jaffna join TNA and TNPF politicians on 27 Aug 2013 to conduct anti-Government protests in front of the UN office during Navi Pillai’s visit.

Why does the Church call for international investigation into war crimes in Sri Lanka knowing there are no names of dead, no dead bodies, no mass graves and no skeletons to prove such killings happened.

Is the Church strategy to turn Tamil Nadu into a Christian state? Has India looked at the scale of investments in communication networks, churches, missionaries, faith organizations, AID agencies, buying acres of land, putting up prayer houses to foresee the scale of the threat?

If Church played a key role in Rwanda in 1991 – we have every right to ponder at its role in Sri Lanka.

How many Tamil Hindus have converted to Christianity/Catholicism as a result of the faith-based charity organizations that operated through LTTE’s defacto rule of the North & East of Sri Lanka?

Was LTTE merely an interim-beneficiary of a greater plan which used Prabakaran & his desire to rule his own, to buy time to roll out the West-Church agenda? Even if Prabakaran was aware of this interior plan, he was dependent on their alliances to survive & reign supreme.

Have you noticed that Prabakaran demanded a separate state before highlighting discriminations! No one has presented consistent discrimination examples where Sinhalese majority legally or constitutionally enjoy rights & privileges more than the Tamil minority. Sri Lanka’s Tamils have never suffered the discriminations that blacks suffered in US, or South Africa or marginalizing as indigenous natives in Canada, US, Australia & New Zealand.

Have you noticed how Prabakaran targeted & killed the entire moderate thinking Tamil Hindu leaders, politicians, academics & people respected in society? Was this part of the greater plan?

Has Prabakaran or LTTE protected or fostered Tamil Hindu culture? Even LTTE combatants were buried and had engraved stones and eulogies as per Christian/Catholic customs and not Hindu customs.

If Prabakaran & LTTE were supported by the Church, it meant LTTE & Prabakaran ruled over 90% of Tamil Hindus!

Was Prabakaran & LTTE made to use CASTE as a bigger plan? Claiming to rid caste barriers, LTTE killer force was virtually all low caste and low class Tamil Hindus. While impoverished Tamil Hindus were being converted.

Why is it that LTTE is always being supported by US-Canada & EU except for their Asian proxies India & Japan who either abstain or do not vote in Geneva?

Is separatist-terrorism being accompanied by neocolonial dominion-ism where the belief that it is their God-given right to rule over all earthly institutions warrants them to combine political-theological agenda via use of foot soldiers across the board.

Is the greater plan to destroy Hindu control in Tamil Nadu & Buddhist control in Sri Lanka?

Is the greater plan to eventually balkanize India as technically what we call India today was never one single nation until the British cobbled up independent princely states & territories to create India in 1947 (India’s history is just 75 years.

Thus, India may have trained and armed Tamil militancy but if Bishop Robert Caldwell & the Church that first coined term Dravida Nadu, did the same Church champion the quest for Tamil Eelam too?

There was no term called Dravidian until British missionary created it. It was Bishop Caldwell who declared Telugu, Tamil, Malayalam, Kannada as Dravidian language family.

The Dravidian movement was led by Bishop Caldwell & controlled by the Global Church.

If the map of Dravida Nadu was also created by the Church, is the map of Tamil Eelam a Church creation as well?

This means the Dravidian theory is an artificial one implanted by the Church.

Missionary movement in Tamil Nadu took pains to emotionally attach Tamils to facets being used in Geneva/UNHRC to claim ‘self-determination’. Little emphasis is given to how self-determination & Tamil Homeland can be demanded in 2 separate countries, for the same ethnic group using the same arguments UNLESS the ultimate aim is to annex Sri Lanka’s North & East to create a converted Pan-Christian satellite state.

It is these same players promoting linguistic separatism of Tamils both in Tamil Nadu & Sri Lanka.

Thus the project to separate Sri Lanka & create a separate Tamil state is led not by Tamils or Tamil Hindus but by the Church & its Western alliances. 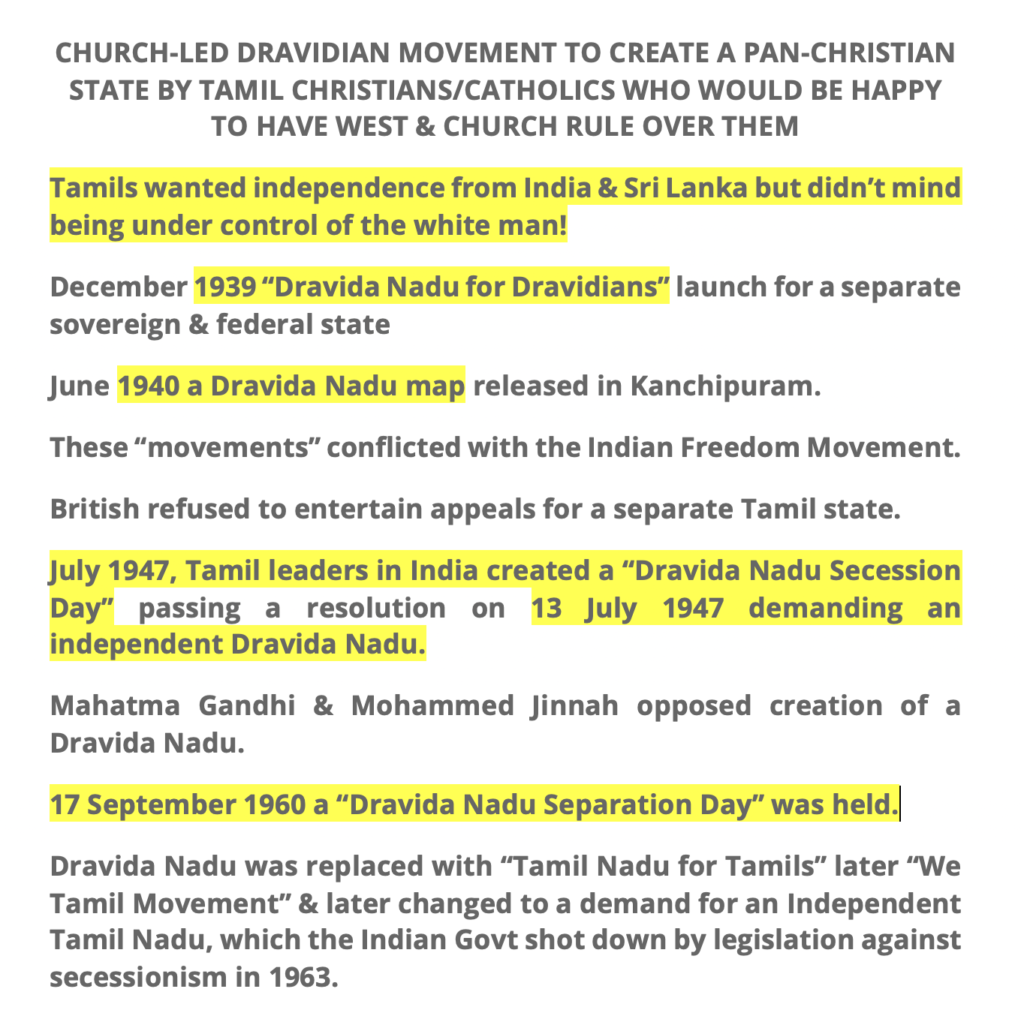 Have you not wondered how ‘secessionist’ movements have originated or was promoted by the Church lobby and asked why?

Is it not curious that S J V Chelvanayagam was a Christian arriving suddenly from Malaysia to stir the pot & create a political party – ITAK & seek a separate state in 1949?

Is it not curious how the Church-created Dravida Nadu demands were identical to the LTTE demands in Thimpu in 1985?

Did the Church inspire to secede & separate?

Was the armed movement the next step? Dravida Nadu movement created the Tamil Nadu Liberation Army while the Tamil Eelam movement in Sri Lanka resulted in numerous Tamil militant groups from which LTTE emerged powerful & hijacked quest from Tamil politicians. The hashtag movement #DravidaNadu was relaunched in 2017 the same time India became a QUAD partner. Evangelical movement is gaining grounds in both Tamil Nadu & Sri Lanka. Many Crypto Christians are pretending to be their birth faith but cult evangelicals. They are silently playing a key role in politics – economics – society – sports etc.

Where does India fit into all this? For starters, India must first wonder what or who led Indira Gandhi to agree to train and arm Sri Lankan Tamil militants.

NO TRUTH COMMISSION can omit the role of the Global Church & associated entities and alliances operating in Sri Lanka & overseas who were linked to LTTE terror & quest for separatism.