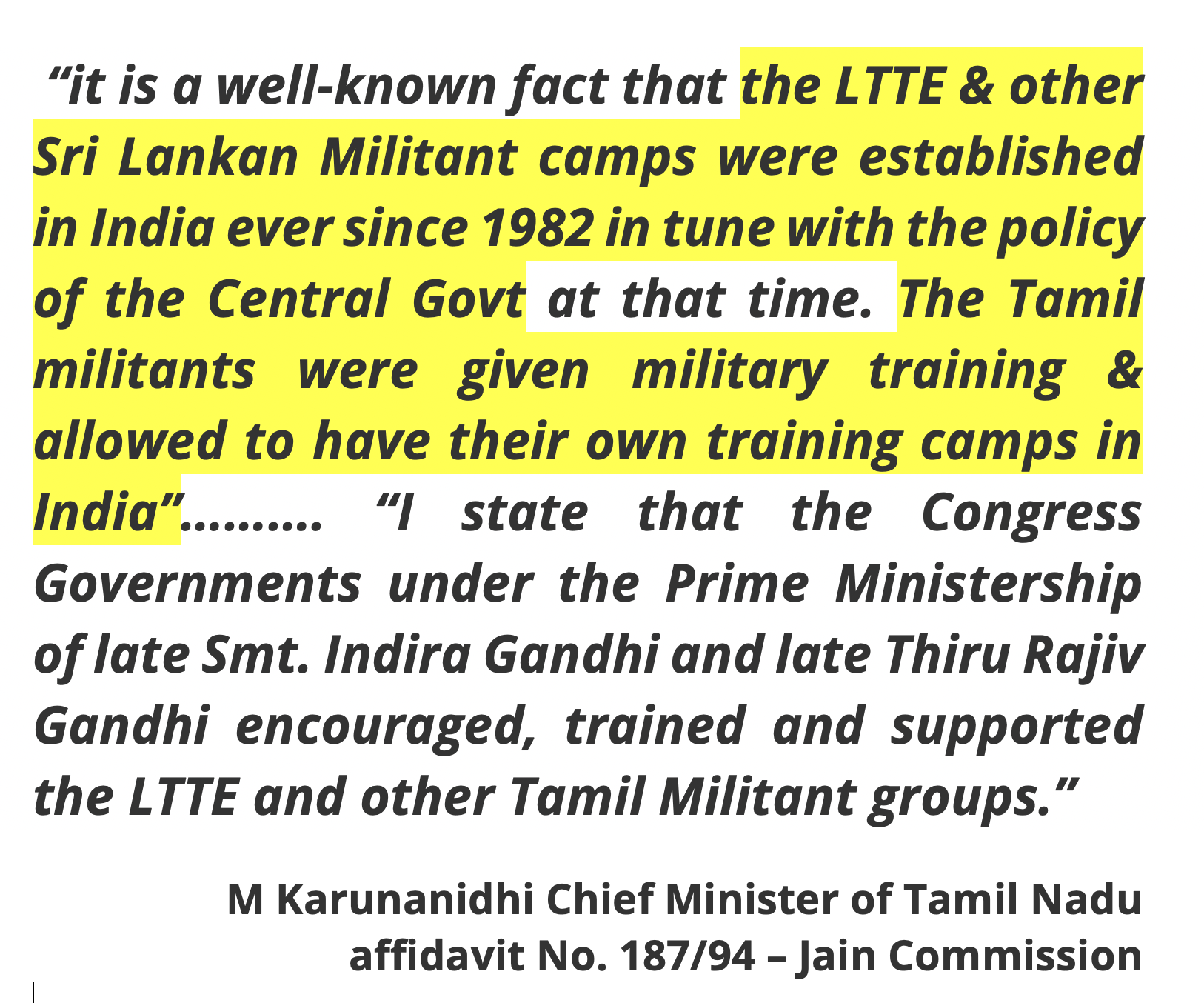 Sri Lanka has landed in trouble due to bad advice and silly policy decisions. We already have a Lessons Learned & Reconciliation Commission. We have had 3 successive UNHRC Resolutions. We have faced an UNHRC investigation. So far, while we have been accused of killing 40,000 upto 200,000 Tamils, no names, no dead bodies, no skeletons, no mass graves have been found. So where does that leave ‘genocide’ charges? However, those insisting on TRUTH should be ready to face the TRUTH & the truth must start with how Tamil militancy emerged. Therefore, 3 decades of LTTE terror started off in India with Indian Government’s nod of approval. Is India ready to face the TRUTH & is Sri Lanka ready to place the TRUTH? If not, do not waste money on any TRUTH COMMISSIONS!

Indian Air Force dropped food violating Sri Lanka’s air space. Indian Foreign Minister Natwar Singh called Sri Lanka’s envoy in Delhi 30 minutes before dropping 25 tons of food on 4 June 1987 at 4p.m. 5 AN-32s were escorted by 5 Mirage 2000s (armed with 2 Matra Magic AAMs & 3 drop tanks) from Bangalore airport. 35 national & international journalists joined this flight with 7 on each of the 5 planes. There are witness to this violation. Sri Lanka’s envoy was told that any opposition ‘would be met by force’ signaling a crime of aggression.

Signing of Indo-Lanka Accord on 29 July 1987 drafted by India to suit India’s interest.

Indian intel boasted ‘we will have Prabakaran in our custody within 72 hours’.

IPKF ended up gunning down Tamils, raping Tamil women, attacking Sinhalese villages. India did not take action against any of the Indian soldiers committing the crimes.

TRUTH: India allowed LTTE to use Chennai as Logistics Hub

“….The issue had become very sensitive, and meanwhile, the Prime Minister’s advisors were working overtime, giving facilities to the militants, particularly the TELO (Tamil Ealam Liberation Organisation) to be trained in the use of modern arms in the camps organised in Tamil Nadu, Karnataka, Uttar Pradesh, New Delhi and elsewhere. The idea was that after the training, they would be supplied with arms and sent to Northern Sri Lanka to engage the Sri Lankan troops in guerrilla action. It was supposed to be a top secret operation without even the knowledge of the State Government and its Intelligence agency. (at least as far as Tamil Nadu was concerned.”…..“The insurgency operation was so clumsily organised that it was, before long, an open secret. Each training camp was a mini Union Territory completely controlled by Central agencies, into which the State Intelligence or the State Police had no access.”

Trained cadre were housed in safe locations at Uchipuli, Mantapam, Thangachimadam (all around Rameswaram) and Arcotthurai, Vizhunthamavadi, Vedaranyam and Point Calimere (around Nagapattinam) and were later ferried to the Jaffna peninsula to fight the Sri Lankan Army. Injured cadres were similarly brought back to Tamil Nadu for treatment.

LTTE:- 6 camps were reported being conducted by the LTTE

District of Anna (1 camp), Thanjavur West (1 camp), Thanjavur East (1 camp), Salem (1 camp, Madurai (1 camp) and Ramnad ( 1 camp) of Tamil Nadu. The total strength of trainees in these camps was reported to be 495 cadres including 90 female Tigers. The camp at Sirumalai (Anna district) was the only camp were all the 90 female Tigers were getting training along with 40 male Tigers. The largest LTTE camp was located at Kumbarapatti in Salem district. The training comprised Arms Training, swimming, boat driving and physical training. The camps were equipped with transport facilities such as Jeeps, Vans, motor cycles etc.

TELO:- Five camps organised by Tamil Eelam Liberation Organisation (TELO) were reported to be running in the districts of Ramnad ( 3 camps) and Salem ( 2 camps). There were totally 233 male cadres undergoing this training which comprised Physical Training, Arms training, swimming and boat driving.

EROS:- Eelam Revolutionary Organisers (EROS) were reported to be conducting two camps in the districts of Ramnad and Pasumpon Muthuramalingam districts. There were 8 male trainees in these camps which were imparting Physical Training and Arms Training.

EPRLF: The Eelam Peoples Revolutionary Liberation Front (EPRLF) was reported to be conducting 7 training camps in the districts of Thanjavur West (3 camps), South Arcot (2 camps), Trichy ( 1 camp) and Ramnad (1 camp) with a total strength of 73 male trainees who were being trained in Guerilla warfare, Physical Training and Arms training. These camps reportedly possessed sophisticated weapons such as Light Machine -guns as well as transport vehicles.

Thus a total of 3179 males and 184 females (3363 cadres) were trained by the Indian Government in India in secret during 1983-1986. These groups were allowed to run their own offices in Tamil Nadu.

“…each training camp was a mini-Union Territory completely controlled by Central agencies, into which the State intelligence or the State police had no entry. It was almost a take-over of chunks of Tamil Nadu territory by the Centre, but MGR was unmoved.”

“In one of his many informal chats with me later on, Prabakaran was to confide that they received massive doses of financial and military assistance from India and were provided training facilities in Tamil Nadu. Interestingly, during 1983 and 1984, the Intelligence Bureau and the Research and Analysis Wing (the two Indian intelligence agencies) got directly involved in training the militant Tamil groups and providing assistance to them.”

“It is a fact that Tamil Nadu Chief Minister M.G. Ramachandran provided sufficient finances to the LTTE to purchase arms and supplies even after the IPKF was launched against this militant group.”

QUESTION: Did India have a role in 1983 July riots?

The answer to this needs to be looked at from the angle of how India that secretly trained Tamil militants in guerilla warfare were to bring them out into the open and justify Tamil militancy while also justifying India’s interference. Was July 1983 instigated to enable both to take place?

If attacks were ‘orchestrated” it succeeded to present notion that Tamils were being attacked & justified Tamils taking arms. Tamils fleeing for safety to India, justified India’s right to interfere.

Those who lived in Sri Lanka knew that attackers knew which houses to attack. Tamil friends of politicians were not attacked. Attacks eventually enabled many who weren’t attacked to pose infront of houses that were attacked & apply for asylum to western shores.

“the riots of July 1983 …………. Led to a significant upsurge in public sentiment in Tamil Nadu in support of the Sri Lankan Tamils. The large number of Tamils killed in the riots led to calls for Indian military intervention in Sri Lanka.”

“If Indira Gandhi and Rajiv Gandhi support the LTTE, they become desh bhakts (patriots). If Karunanidhi supports it, the LTTE becomes anti-national”

“why India did not declare LTTE anti-national when it was fighting the IPKF?”

Under Rajiv Gandhi the Indian Government continued to supply arms and ammunition including anti-aircraft guns to the LTTE and EROS and cadres were brought to India for military training where they were taught to fire surface-to-air missiles. EROS cadres were also taught to lay sea mines.

TRUTH: The Tamil Diaspora enabled Tamil militant propaganda but the flip side of this resulted in Tamil militants getting “adopted” for western agendas & being christened by their footsoldiers.

TRUTH: LTTE & Other Militant groups were only guinea pigs in a larger political game that would never have given them an Eelam but would have got them to create an Eelam for the invisible hands that were steering them.

Given all this knowledge – would you consider India a friend?