Questions for the Office of Missing Persons /Reparations Sri Lanka

A lot of people are coming forward to give their expert opinions on how the war should have been fought. You wonder at times, where were all these people when LTTE were carrying out suicide attacks, assassinations & bombing missions throughout 3 decades. Why could they have not come out with all these templates for conflict resolution & solutions before people were getting killed? Where were they & what role did they play when LTTE were on a killing rampage. Every penny that should have gone to develop Sri Lanka was diverted to fighting terror. Why is LTTE not being held accountable for this? 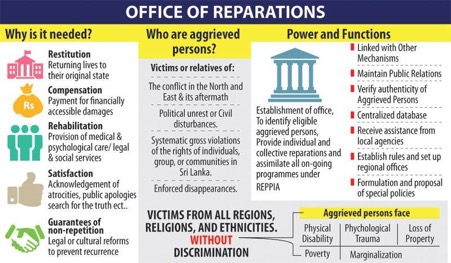 LTTE evolved into a global network – LTTE comprised not just the leader Prabakaran, his ground force but LTTE had its representatives placed overseas and throughout the country who were handling logistics, propaganda, promotion & communication, financing & illegal & legal activities which generated the funds for them to fight, maintain their cadres, buy over influential people to speak on behalf of them & carry out bogus humanitarian/charity initiatives that would camouflage & cover their true colours. None of the people who were covertly & overtly involved in these activities are being investigated and no one seems to be wanting to hold them to account for their aiding & abetting terror, top on the list is TNA that LTTE created to be its political wing.

Can the Office of Missing Persons/Office of Reparations tell us

Therefore, moving forward the Missing Persons Office/Reparations Office must realize that the victims of the conflict are NOT ONLY TAMILS, NOT ONLY LTTE as is the common notion that we are forced to believe & accept.

Tamils died not by Sri Lanka Armed Forces alone. LTTE killed plenty of Tamils and some of these Tamils were noteable & valuable persons to Sri Lankan society the name of Lakhsman Kadiragamar is one such.

The real victims are the people that the illegal armed groups targeted & killed. Their rights should be looked into first. Their grievances should be addressed first NOT those of the LTTE or their families.

NO story can close without justice being served. Justice must be not only said to be done but be seen to be done as well. Therefore, the real victims must be looked after first. The real victims are NOT the LTTE, Not the LTTE families, Not the families of people linked to LTTE.

What the Office of Missing & Reparations cannot forget is that even foreign intelligence have acknowledged that the LTTE ideology & LTTE international networks are functioning still inspite of LTTE defeat. We know by the manner that the banned LTTE fronts are functioning even inside the UN & among UNHRC officials that money is a strong influencer in the inaction of authorities against them. Over and above this it is the representatives of these fronts that are meeting not only our government representatives by foreign envoys & UN officials but are making the identical demands made by LTTE and endorsed by the Tamil political leadership. In such a scenario it is quit laughable that we are extending the laurel which the demands of the LTTE & the separatist demands of the Tamil leadership continues.

Let us not live in any fairyland & create more problems that cannot be solved. We believe that officials given public roles & paid by the state are paid to protect the interests of the country & the citizens and not the elements trying to divide or separate the country.