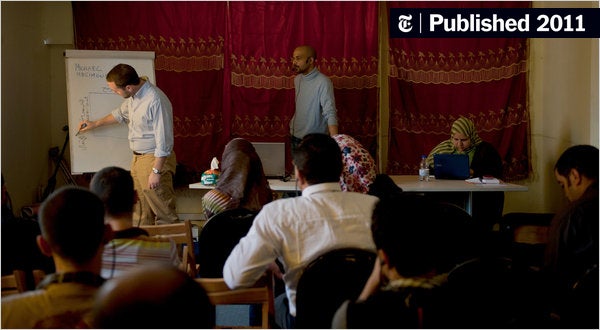 Ron Nixon writing to the New York Times in April 2011 says that the US “democracy-building campaigns played a bigger role in fomenting protests” than was previously known. The key words here is “than previously known”. Which means we only come to learn of the involvement much later. By that time the expected damage is done.

Ron Nixon says that ‘key leaders of the movements’ were ‘trained by the Americans in campaigning, organizing through new media tools & monitoring elections”.

Note what he says next “a number of the groups & individuals directly involved in the revolts & reforms sweeping the region, including the April 6 Youth Movement in Egypt, the Bahrain Center for Human Rights and grass-roots activists like Entsar Qadhi, a youth leader in Yemen, received training and financing from groups like the International Republican Institute, the National Democratic Institute and Freedom House”.

Ron Nixon says that some Egyptian youth leaders attended 2008 technology meeting in New York where they were taught to use social networking & mobile technologies to promote democracy – the meeting was sponsored by Facebook, Google, MTV, Columbia Law School & US State Dept.

Bashem Fathy, a founder of the youth movement that kicked started the Egyptian uprisings says  “We learned how to organize and build coalitions,”

Fathy says “This certainly helped during the revolution.”

However, “activist groups complained in interviews that the United States was hypocritical for helping them at the same time that it was supporting the governments they sought to change” – do we not see this happening elsewhere too.

Middle Uprisings undoubtedly were home grown – but they were helped & fanned by external forces. Isn’t this the same blueprint happening elsewhere too.

Here is another important statement by Stephen McInerney, Executive Director of the Project on Middle East Democracy

“We didn’t fund them to start protests, but we did help support their development of skills and networking,” ….. “That training did play a role in what ultimately happened, but it was their revolution. We didn’t start it.”