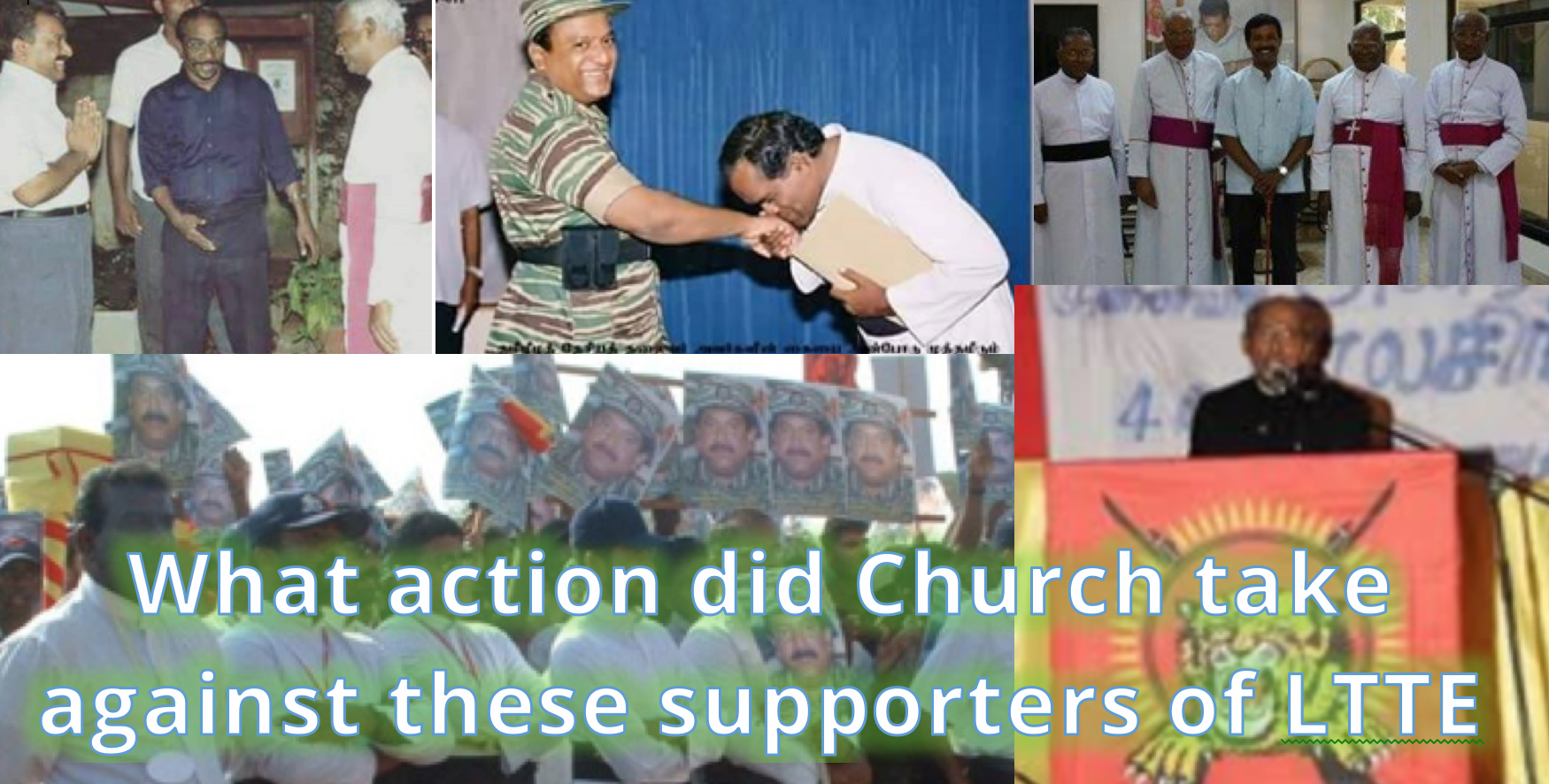 A terrorist and a terror attack whatever justification for their killings must be abhorred by all. Sri Lanka is no stranger to killings since independence. We have seen JVP killings, UNP mass killings in 1980s/early 1990s, 3 decades of LTTE killings and when we thought that ended with May 2009, we were surprised with the Easter Sunday mass murder. None of these murders are more important than the other. All these heinous crimes were aimed at innocent people and were calculated murder. What is the justice that the dead and their families have got? While we have demanded justice from LTTE & all those who were part of LTTE nexus, the international community demands release of LTTE combatants. The Church now demands justice for the Easter Sunday dead, demanding the exposure of the masterminds behind the attack, but the Church is conveniently forgetting that the Church did nothing against Church priests who were openly and abashedly helping LTTE including scores of faith-based NGOs with funding. Can we ask the Church why it is selective in its demand for justice? Innocent people were killed by LTTE just as innocent people were killed by pro-ISIS Islamic terrorists. Why didn’t the Church take action against the likes of Rayappu Joseph et al? 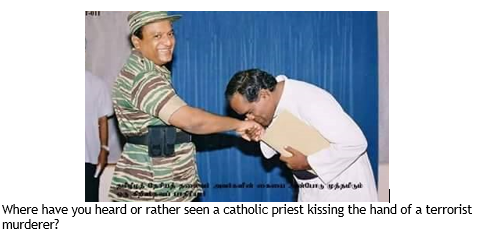 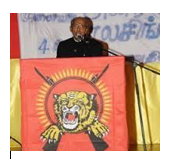 Father S. J. Emmanuel: Former Vicar-General of Jaffnacalled Prabakaran‘Jesus Christ’, the LTTE ‘soldiers of Christ’, the suicide bombers ‘martyrs of the Catholic Church’ to whom the Church provided a Catholic burial, and proclaimed himself as ‘the Moses’ who would lead the Tamil nation from the bondage of Sinhalese-Buddhists to the land chosen for them by God: Eelam. He now leads the Global Tamil Forum and entity banned by the GoSL

Why would the Church allow a separate congregation for Tamils and non-Tamils inside the Church – in a religion preaching to all equally and when all are supposed to be God’s children? 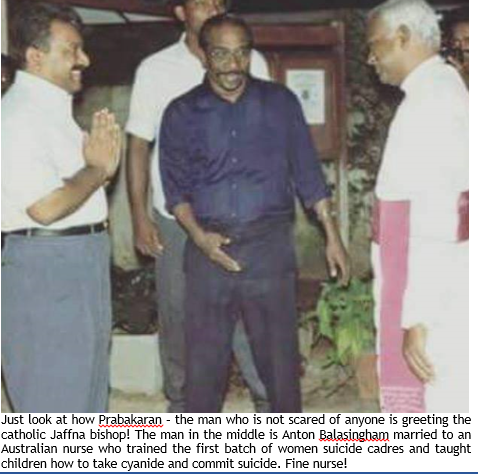 LTTE Voice of Tigers tied up with Radio Veritas, a Catholic broadcasting station run by the Asian Catholic Bishops Conferencebased in The Philippines. The Tamil Service of the Radio Veritas is run by the Tamil Catholics of Tamil Nadu.

Voice of Tigers had a “coordinating office” inside St. Sebastian’s Church in Mallavi, Wanni; ran LTTE’s Voice of Tigers with Radio Veritas (run by Asian Catholic Bishops Conference) which reached an audience of 850,000 people.

the office was opened by the pro-LTTE Bishop of Mannar Fr. Rayappu Joseph.

Incidentally, Jaffna Mayor and MP of the Sri Lanka Freedom Party, Alfred Duraiappa, Prabhakaran’s first assassination, had got off at the Madhu Church before proceeding to Jaffna. Many believe it was a tip off from the Church that informed Prabhakaran of Duraiappah’s arrival in Jaffna, leading to his death.

18 February 2013 – Rev. Rajappu Joseph with 132 Catholic priestswrote to the President and members of the 22rd UNHRC session appealing for a resolution on accountability, reconciliation, human rights in Sri Lanka. The letter starts ‘As a group of concerned Christians’ and requested that the UN ‘acknowledge the international self-determination of the Tamil people’– this directly depicts his guilt in openly canvassing for the balkanization of Sri Lanka politically if not through the LTTE as was seen in his association with the LTTE leader.

World Council of Churches has been promoting the concept of traditional homeland theory in 1994 at the UNHRC in Geneva. www.sangam.org

January 2014 – Rev. Rayappu Joseph and Rev. Thomas Savundaranayagam alleged that cluster bombs were used by the Sri Lankan army to Stephen Rapp, and to look into deliberate attacks on hospitals, places of worship and the blockade of food and medicine for the civilians trapped in the fighting.

“the World Council of Churches that sponsored the LTTE office in London“Eelam House” which commenced its operation from 1984 officially opened by Father Reyappu Joseph denigrating the SL Government in general and the Sinhalese Buddhist in particular.

A cultural event held at Thirumalai pavilion on 16 December 2012 staged 3 dramas enacted by children from Jaffna Central College, Hindu College and Vembadi Girls College highlighting torture and harassment by the GOSL and SL Army, that Eelam cause was not over even though LTTE cadres were dead(Nilavinai Kurudakka Mudiyathu) and children acting as rehabilitated cadres claiming they had been brainwashed (Kannadiyin Peyum Malai).

On 27 July 2013 another drama was staged and shown to over 1000 on the 13th amendment, the Katchchativu issue– these were all efforts to build resentment against the Government.

Navi Pillay visiting Trincomalee had an hour-long discussion with Fr. Yogeshwaran, a human rights activist of the Jesuit Novitiate, She did not meet a single victim of LTTE terrorism.

Responsibility of the Church

Just as the Church is demanding accountability for Easter Sunday, perhaps the same Church can explain their silence about taking action against Church clergy openly promoting and linked to LTTE terrorists.

The LTTE killed more people than we care to count. To know that Church priests were associated with such an entity while the Church took no action against them is shocking to say the least. However, the same Church is demanding justice and accountability and exposure of all masterminds linked to the Easter Sunday suicides.

Will the Church take action against all of the Church clergy linked to the LTTE?

Will the Church take action against all Catholic/Christian laymen linked to and associated with the LTTE?

Will the Church take action against all Catholic/Christian NGOs that helped LTTE? 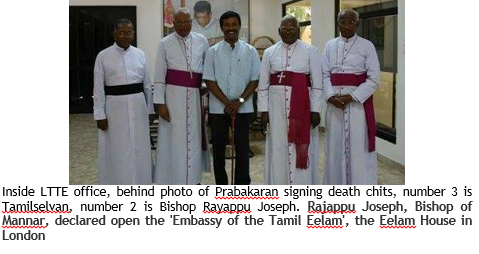 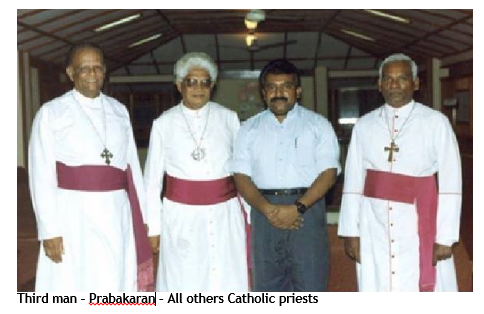 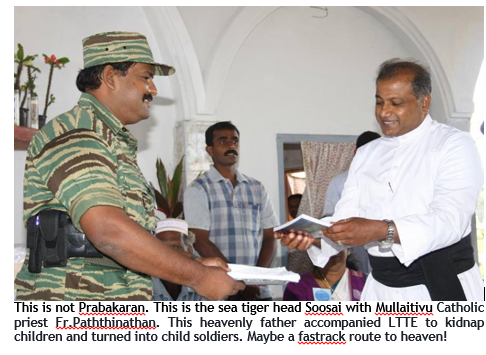 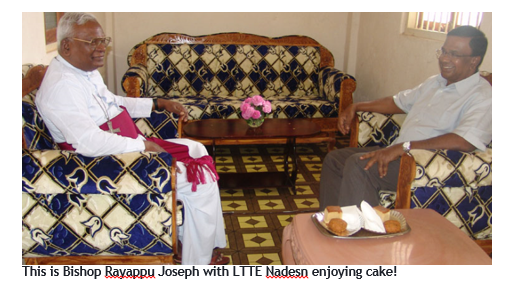 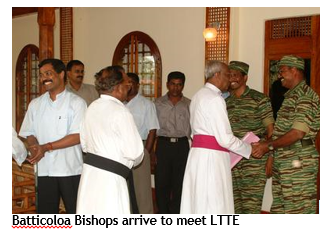 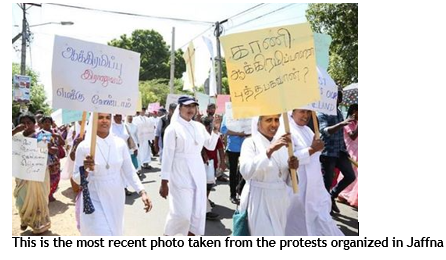