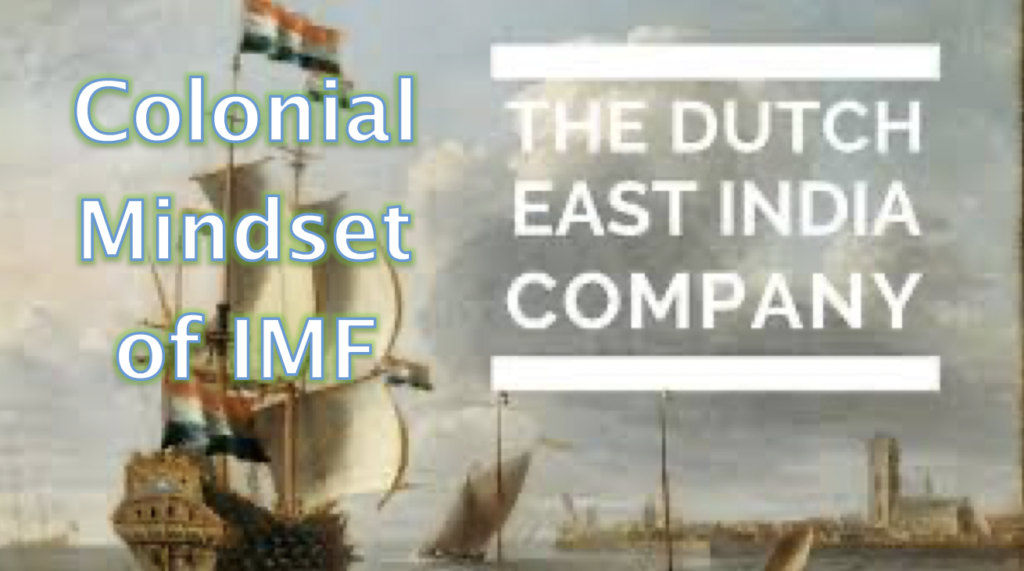 After World War 2 & the League of Nations & the Bank of International Settlement were set up giving bankers & colonial authorities in US & Europe powers to enforce austerity programs & regulate prices based on white supremacy. Then came the Bretton Woods global monetary management system which collapsed in early 1970s & was replaced by free market economic policies. With end of colonialism all that the white nations did were transferred into a new economic/trade imperialism to rule the world once again using a different format. Thus, at the background of IMF & WB policies, the hidden imperial objective persists. The tools used under colonial rule were injected into the global systems in particular international monetary institutes that the West controlled. While the British dominated the League of Nations, IMF is dominated by the US and WB by Europe.

It is important to understand that decolonization did not happen willingly but because there was little choice. Given this scenario, it was essential to create a new system that would enable the former colonies to continue their dominance over the colonized & enable them to prevail over their domestic affairs. IMF/WB and other international systems like UN & its entities were created for this purpose. The objective was to continue global governance by a handful by any & every means using new ‘democratic’ terminology.

Encouraging self-determination was to once again bring the new ‘independent state’ under subtle control of the West. These nations were only made to think they were ‘independent’.

Governments puts countries into debt – then go to International Lending Agencies who are happy to give loans with prescriptive conditions. These conditions don’t affect politicians or the elite. They are intentionally targeted at the masses. Governments are happy to sign up to the conditions, while they continue their wastage & corruptions. This ugly practice continues no different to colonial times.