Argentina gained independence from Spain in 1810. Like Sri Lanka, Argentina is rich in agriculture with vast fertile land. Unlike Sri Lanka, by 1913 Argentina became one of the world’s 10th wealthiest states. Like Sri Lanka, political instability became a factor for Argentina’s decline. Unlike Sri Lanka, Argentina was ruled by the military for 60 years. Agriculture production fell as a result of import substitution adopted by both governments. This created a large government, large wage increases, inefficient production & chronic inflation contributing to foreign debt for both nations. Measures taken by Argentina were to make its currency (peso) equal to US dollar & privatize state-run companies, which anyway led to default, then recovery, then again default in 2014 & 2020. Argentina has defaulted on its debt 9 times & currency devalued resulting in high inflation. Argentinians realize what went wrong & are demanding IMF be taken to international court.

Argentina like Sri Lanka had leaders following what suited their party policies instead of what the country & the people needed. The primary reasons for this was western governments & their proxies placing them in power to implement their agendas in exchange to ignore corruptions by these governments. West eventually used these corruptions as bribes to further advance agendas. Ultimately only countries & the people suffered.

Thus from an agriculture policy to industrialization to nationalism to corporate was a hallmark of governance in both countries. Argentina departed from a pro-West Catholic influence to a more state-controlled economy in the 1940s no different to what Mrs. Bandaranaike sought to achieve. That wasn’t allowed to last long.

Argentina could never control inflation on top of which an armed conflict arose in 1982 with UK over Falkland Islands just like Sri Lanka began its 3 decade of armed conflict against LTTE in 1983.

It was in 1982 that Argentina went to IMF for financial assistance just as Sri Lanka went to IMF in 1983 for a Standby Arrangement. Military dictatorship ended in Dec1983 with Raul Alfonsin elected as President who too began IMF discussions which failed. Argentina even changed its currency yet in 1986 it failed to pay debt though debt was renegotiated.

New IMF agreements were reached in 1987 & 1989 but failed resulting in high inflation leaving Argentina no choice but to privatize. Were these IMF failures part of the privatization agenda? Is this what is happening to Sri Lanka as well?

Argentina privatized almost every state owned enterprise except for a couple of banks. Privatization meant moving from public ownership to private profit and they raised prices to ensure their profits increased providing no solace to the people. These are areas that Sri Lanka has yet to experience and is likely to experience going blindly with the ‘privatization’ chant.

Argentina went again to IMF in 1999 for a $7.2b standby arrangement. Argentine debt was held in bonds & inspite of selling it could not meet debt payments. A situation no different to what Sri Lanka just experienced.

Argentina like Sri Lanka suffered an economic & political crisis. Value of the currency in both depreciated, unemployment in both countries increased, income poverty grew.

Privatization was not the answer that Argentina found out too late – they could blame economic neoliberalization because privatization proved a failure. Why is it then that the IMF worshippers and stooges of private organizations promoting privatization for Sri Lanka? It is only because a handful stand to benefit.

Privatization in Argentina was promoted by the Washington Consensus just as it is promoting same in Sri Lanka.

2002 saw Argentina appoint 2 Presidents in the space of 2 weeks, a likely scenario with the calls for present President of Sri Lanka to resign. President Kirtchner decided to liquidate Argentinian debt to IMF ($9.8b)in a single payment without refinancing with Venezuela buying Argentine bonds for $1.6b. By 2008 Venezuela held $6b in Argentine debt.

Fast forward to 2021 Argentinians are urging its government not to sign a debt restructuring deal with IMF – quite the opposite is happening in Sri Lanka.

People are protesting not to sign with IMF in one country and in the other country people protesting to sign!

The People of Argentina were well aware of the IMF & the misery it brought Argentinians with austerity measures. Argentina owed IMF $44b due since 2018. The agreement was to pay $19b each in 2022 and 2023.

Argentinians suffered much during the 2001 financial meltdown – currency was devalued, bank withdrawals were banned after Argentina defaulted on $93b debt. This is exactly what is happening to Sri Lanka in 2022 after Sri Lanka’s govt declared default. Both countries lacked dollars to trade. Argentinians do have dollars but they were in tax havens – this is the allegation being thrown in Sri Lanka too.

In looking at Argentina & IMF, Sri Lanka needs to realize that Argentina did not get anywhere from IMF bailouts on its advice. Argentinian economy did not improve – it just got worse.

In the case of Argentina, IMF was not interested in addressing the root causes of Argentina’s financial crisis, no different to the situation in Sri Lanka. Plastering the problem is not the solution, short or even long term. Both countries require to create production capacities to trigger growth.

“​“We don’t have to bow our heads and pay the Fund as the government of Alberto Fernández is doing.

We say that scams are not to be paid, and we say no to the impunity of those responsible for surrendering our sovereignty.

We’ve seen this story many times before in Argentina, and it always ends with an adjustment for working people.”

IMF has given billions on credit but always with a condition – countries had to sell off valuable state assets & cut country budgets often only hitting the middle class and poor. Since 1956 Argentina has taken IMF funding 22 times as against the 15 times by Sri Lanka since 1965. Argentina took $57b in 2018.

Just like US-agents operating think tanks in Sri Lanka who had been former IMF officials and are pushing Sri Lanka to come under IMF control, Argentina’s $57b loan was as a favor because the president of the IADB was an ex-IMF board member.

Argentina’s loan came timed for elections to sway victory in favor of pro-US candidate and it will be interesting how IMF will drag discussions ahead of possible Sri Lanka’s elections in early 2023.

In Argentina, the pro-US candidate lost but it meant the winner was saddled with repayment of $20b no different to the good governance ISBs that the present govt ended up having to pay. The scenario was identical.

IMF issued an unprecedented report claiming its 2018 loan ($44.5b over 10 years) failed to ‘deliver on its objectives’. IMF even placed formal restrictions on Argentina’s fiscal response to Covid – 125,000 people died. Health, education, income of public workers are always what IMF wants govts to cut spending on.

Argentina then visited Russia and China & agreed to join China’s Belt & Road Initiative. That was when the trouble started just as was the case for Sri Lanka.

It is true governments are the cause, but these causes are invariably created by these international vultures who tempt governments to take loans as taking loans means their entities can give more loans as bailouts with interest.

The Argentinians are demanding IMF be held responsible for its financial colonialism and take Argentina’s case to the International Court of Justice to reclaim Argentina’s sovereignty. The People of Argentina are demanding international justice against what IMF has done & the success of this will encourage other nations to pursue same. 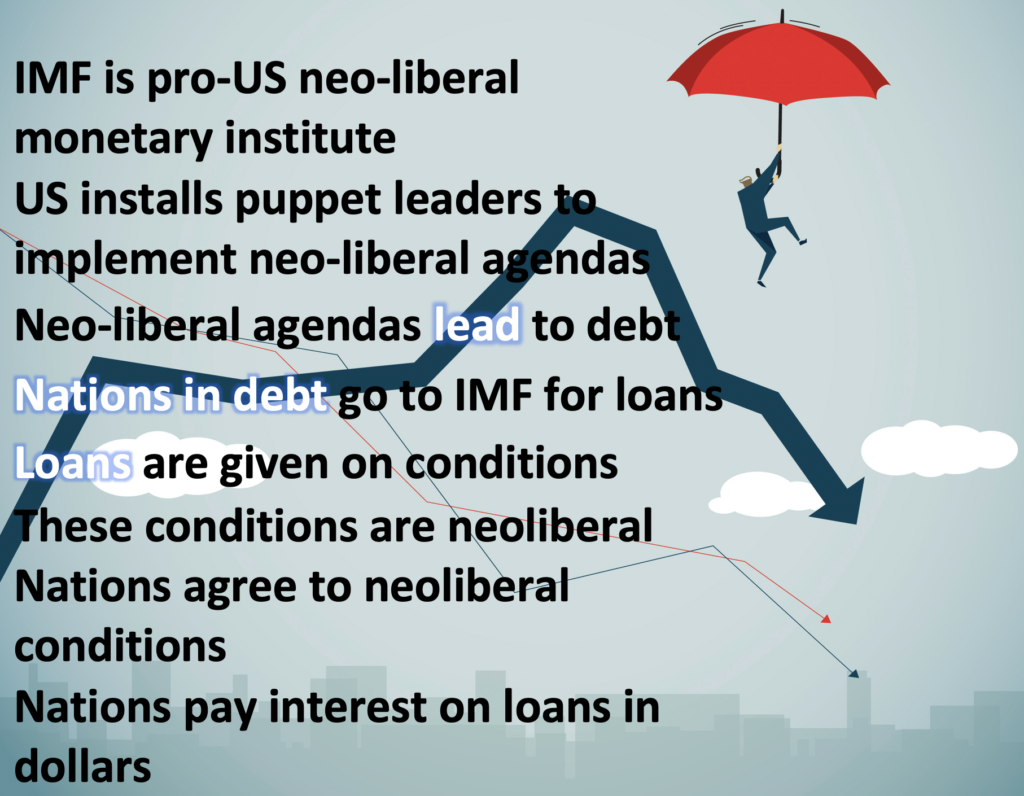