The People have spoken & given way forward: SLPP wins a landslide majority 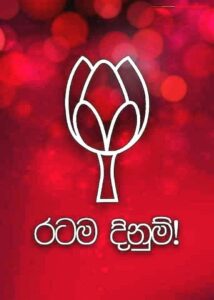 The People have spoken & given a victory that has surprised even the SLPP. The Voice of the People put to pieces any aspirations of a weak government fishing for frogs to cross over. The People have been wise & seen the signals & stopped such. This itself is a clear indication to the new government that the People have not only spoken but have signaled very strong expectations from the government. The New Government is now bound to deliver and deliver with professionalism and patriotism the essential features that propped up and differentiated the SLPP campaign from its competition. 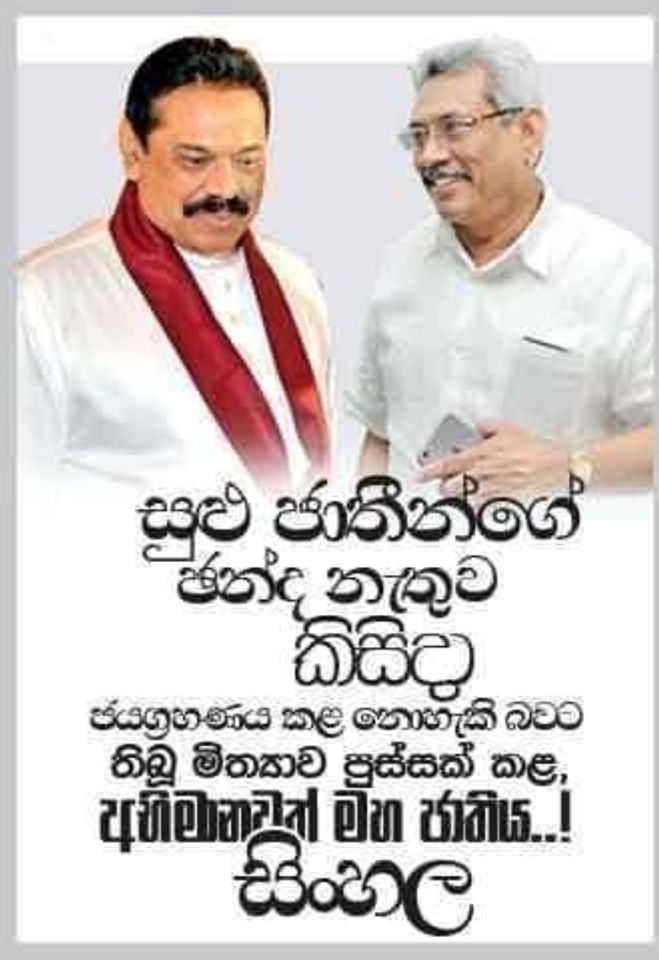 As results continue to pour it, for the second time the majority have shown they can must the necessary votes to create a powerful government. This was evident from the November 2019 Presidential Election and it has been repeated again this election with a slight shift in tempo. There was a significant shift in voter mentality in the North. Clearly apparent was that the bastion of separatist racism that was drummed by TNA & ITAK has fallen and SLPP can be happy that Tamils have offered a laurel and it is a good start for better relations with Col. Ratnapriya leading the way. The Central Province can be happy that Thondamon’s son has also delivered. 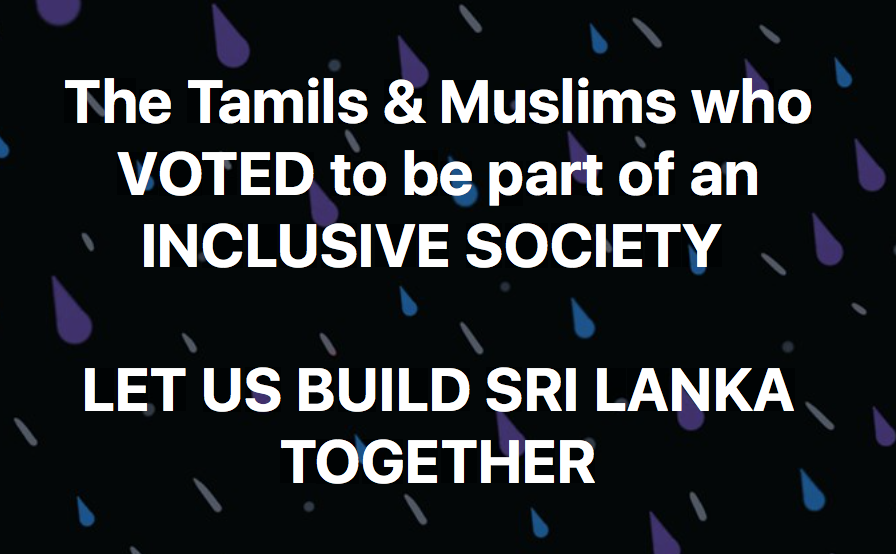 The voters have not forgotten how the country suffered from the 2015 foreign funded regime change – a debacle Sri Lanka has yet to come over. The treacheries agreed and signed during that tenor will forever haunt the UNP Leader who will not only return home branded as a traitor but a leader rejected by his own party & supporters. No UNP leader who held fort for 25 years would want to retire with such memories. Imagine the thought of not even securing enough votes to return to Parliament! The tragedy & irony is that the kapuwath kola green voters eventually ended up rejecting its leader & its party and thus nailing its own coffin. 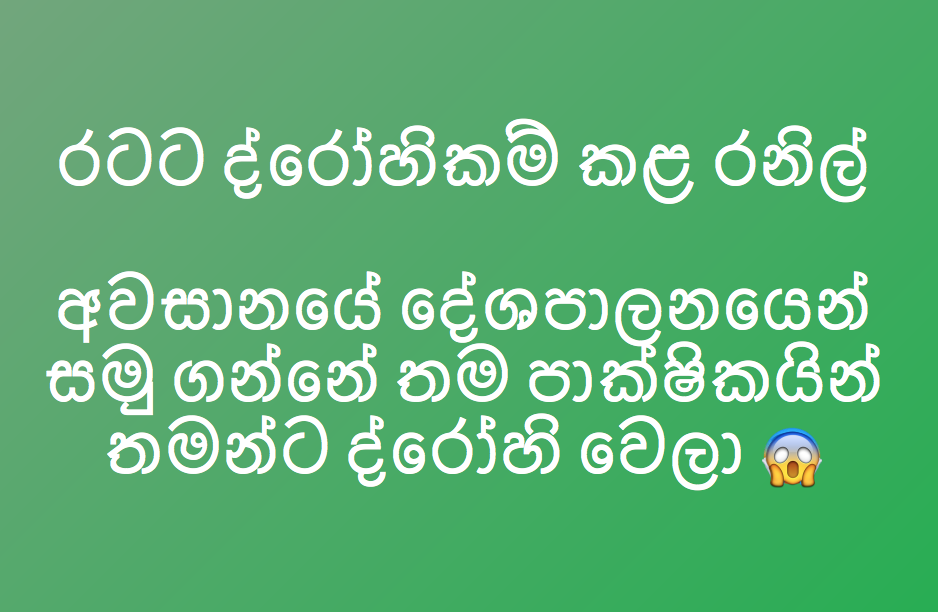 Between Sirisena and Ranil since joining a venture to destroy Sri Lanka, they have both ended up in destroying two of the oldest mainstream political parties in Sri Lanka. The SLFP and UNP are as good as buried. The results speak volumes. The two parties cannot continue unless they completely change their aims & objectives & begin afresh. TNA & ITAK that thought it was the cat’s whiskers too have been in for some surprises with the likelihood that its prominent personalities may also get rejected. There was a time when Sinhala MPs had to seek permission from Sumanthiran to speak in Parliament – such was the ridicule that the majority was subject to under a bogus yahapalana rule. It is a good time to remove the ideology for separatism via Vaddokodai Resolution legally & take legal action against promotion of LTTE under any form. With this done, the Tamil people can more forward and progress.

Every political party have been lavish in promising to the minorities but what have they really promised the majority in exchange for their vote. Coming to power with clear majority in 2019 and now in 2020 the landslide victory must give priority to the people who gave that landslide victory. The majority have never asked for a separate state, they have not sought to illegally acquire land, destroy ancient artefacts or abuse the system – what they seek is to ensure the unitary nature of Sri Lanka remains in tact, that no national assets or strategic areas are given to foreigners on whatever terms & conditions. A new constitution must deny any government voted for a term of office to make such decisions without asking the People/Citizens.

The people have shown they are ready to undergo austerity measures to help the government come out of the difficult situation aggravated from covid-19. They have undergone much hardships and sacrifices. The Western media propaganda enjoy to project the notion that only minorities are denied but throughout the election campaign we saw how in deep rural south even basic water, roads, schools and facilities are not enjoyed by the majority who despite all this came out in their numbers and voted for SLPP. Don’t neglect them this time too. They deserve better.

There are calls for the removal of 13a and 19a – certainly 19a must be removed. Not only have the Commission heads been biased but their selections have ended up removed from their positions! Another important change must be in the electoral system of how people vote and elect their MPs. That TNA who secured only 4% of island votes get 16 seats to parliament highlights the absurdity of seat allocation which must change. A Committee must be appointed to look into this as well as raise the entry vote % to Parliament. 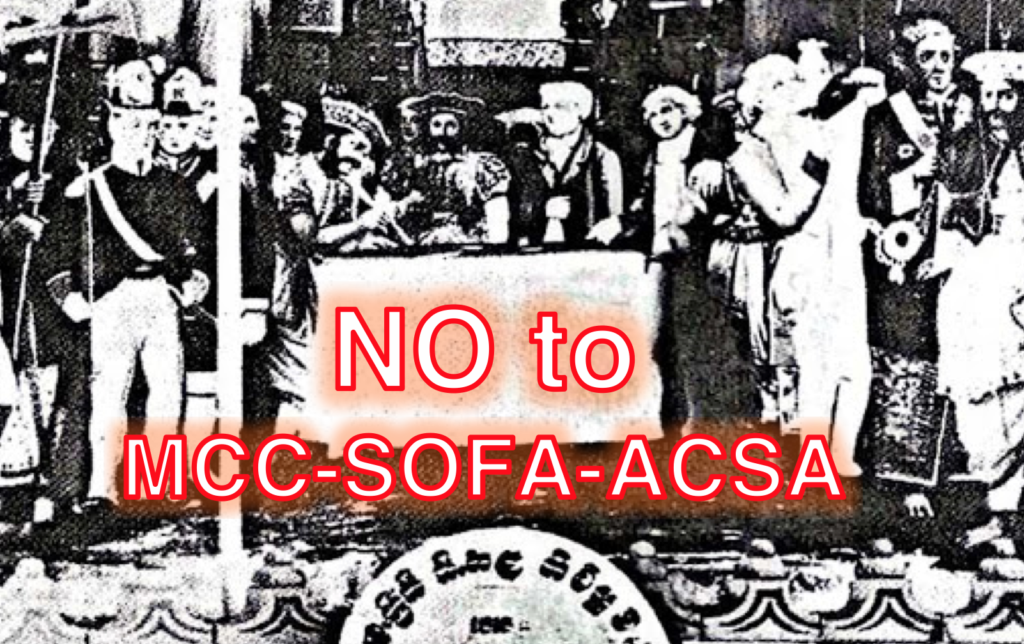 There are some contentious topics that the People have clearly raised their voice against and the Government has the power to use the People as grounds to REJECT MCC-SOFA-ACSA and re-take Trinco Oil Tanks as well as annul any cooperation agreement with India for ECT entered into by the previous government in secret. No agreements in secret can hold water without the approval of the people. We saw the damage such agreements did in the past – Indo-Lanka Accord of 1987 & the 2002 Cease Fire Agreement are two examples. The 3rdattempt was luckily stalled by the former President stopping the privatizing of state land & the signing of MCC. This government therefore cannot proceed with these agreements that the People have openly opposed. No Pathfinder should be entertained to do so.

It has been a case of ditta dhamma for most MPs who to please the international community to appease the real racists in minority leaders that backed the Ranil-Sirisena government to power and openly ridiculed the Sinhala Buddhists, imprisoned the Buddhist theros, imprisoned the intelligence officers, were overjoyed to declare the national army as war criminals & compensate LTTE, find themselves finally rejected by the People. 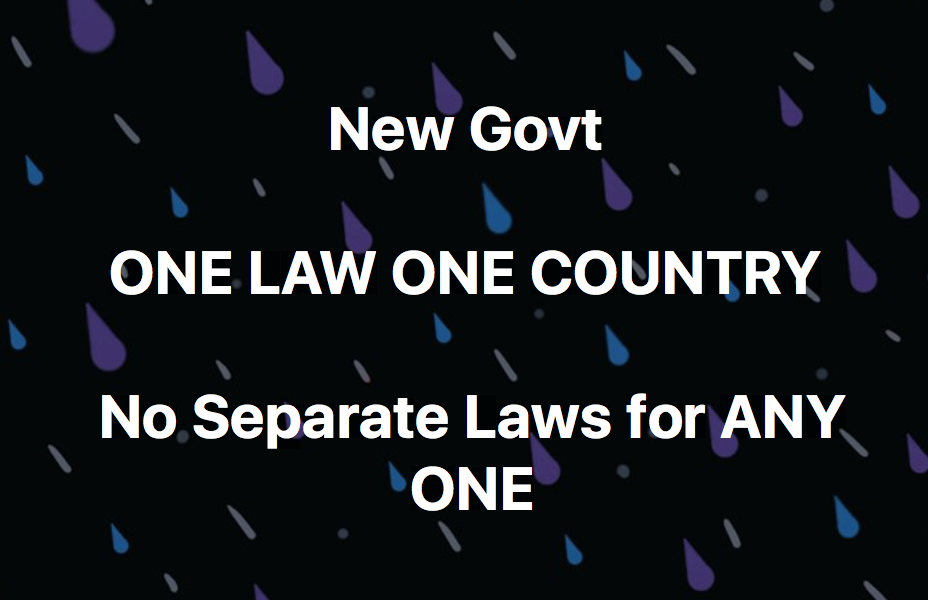 The theme that people rallied behind – One Country One Law must take shape. There can be no exclusive laws for one community. Everyone must be equal before the law and the law must be equal to all. The changes must be done.

In the end, the people waited patiently to use their once in a 5-year vote to reject MPs who had been fooling them and the country for 5 years. It’s a lesson for those who have got elected to not take that same path. People are watching. The present Commissions and Task Forces appointed must deliver and the proposals must be put into action without compromise or silenced by community funds which is often the case and cause for frictions. Heritage sites, archaeological sites & artefacts must be protected by the State and incursions of any kind must stop. Relocation of people must be not with state land but with vertical housing in inclusive communities. No ghetto areas can be allowed. No self-segregation can be tolerated and assimilation must be promoted with the Government laying emphasis to PATRIOTISM by EDUCATION starting with the true history of Sri Lanka compulsory to all. 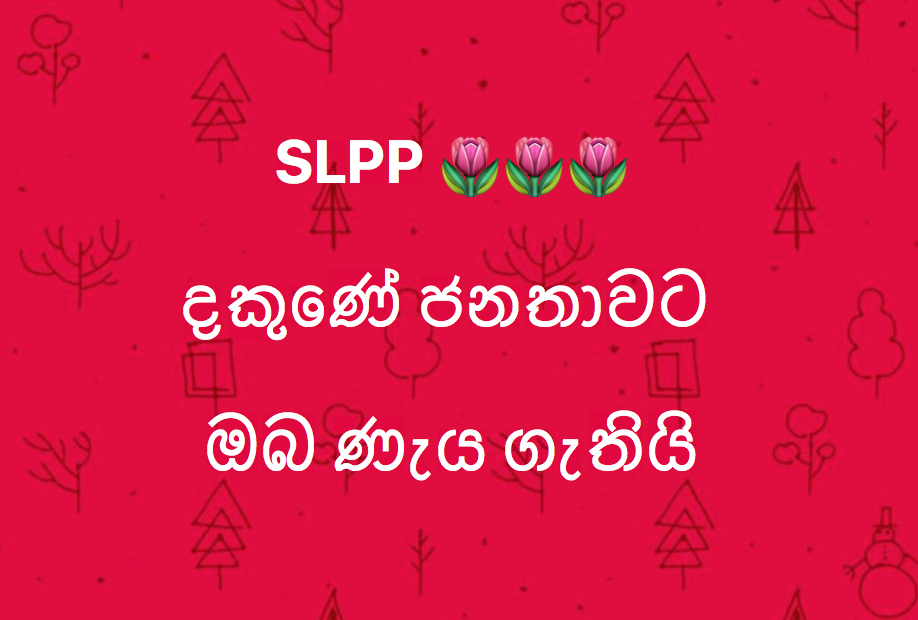 The government must also ensure that public servants in particular secretaries and institutional heads are also kept in check and corruption from top to bottom is contained and curtailed through punitive systems without bias.

The Government must set the priorities suitable for the citizens and not to please the international community or the countries eternally breathing down Sri Lanka’s throat. The acceptance of funding that come tied to various insidious programs meant to divide and create future problems must be looked into with greater scope without simply accepting and discovering the problems tied to funding will cost more to resolve. 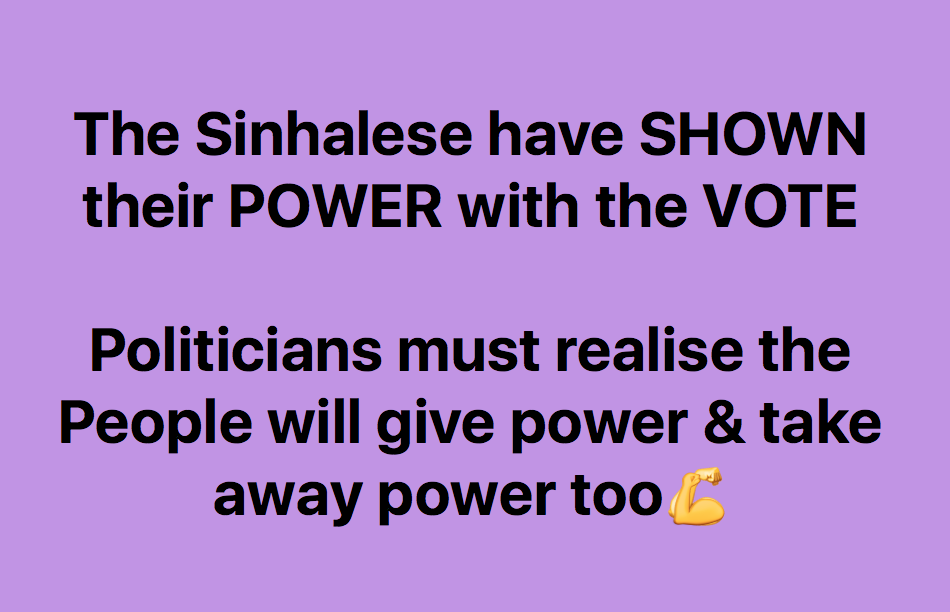 Asia’s oldest democracy has shown how to hold an election amidst a global covid-19 pandemic. The People have shown what peaceful elections are like. The health regulations were all followed. Now the journey is to move forward as a Nation with National Policy, upholding National Integrity & Sovereignty, Patriotism not Personal privileges and benefit Duty not Demands. No rights without Service and the need to realize that no nation can rise without the efforts of all citizens. It takes one person to change the course of destiny and it can surely take all citizens to return Sri Lanka to its glory. We have suffered as a nation enough. Let no one – internal or external impede our resolve. Let us march forward together and build our nation with patriotism. 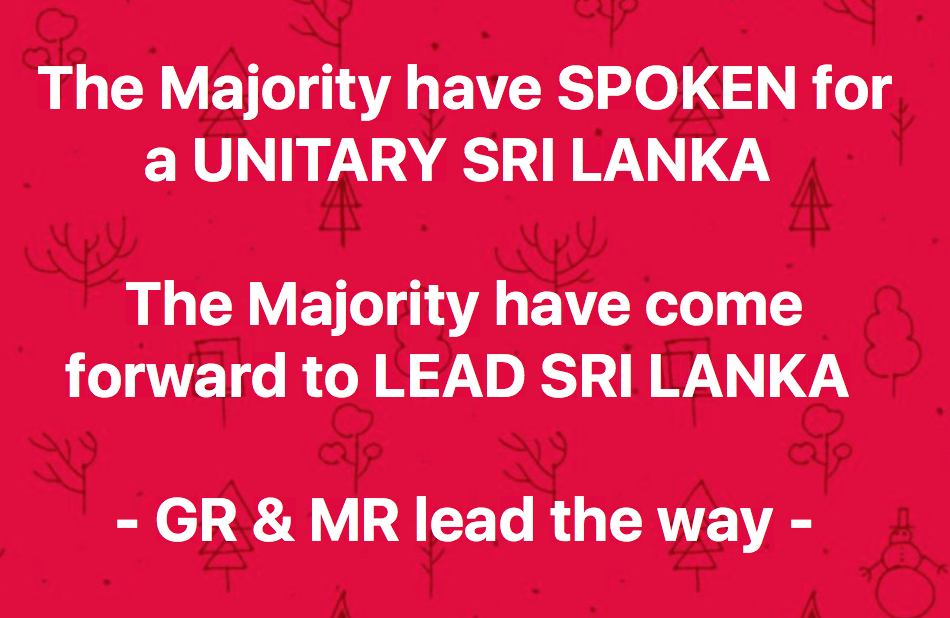 This VOTE given by the People is to BUILD THE NATION & RAISE the level of the People not to repeat the same mistakes that cost them election defeats in the past.

The Government & Parliament must remember that the Sovereignty lies with the People & is inalienable & the People’s Power are given ONLY IN TRUST to the Government for a fixed term. They must uphold the civilizational history of the island & the primordial identity of the country embedded in the National Anthem and Deva Wassethu Kalena.