TNA: Did you seek International Intervention against LTTE Terrorism? 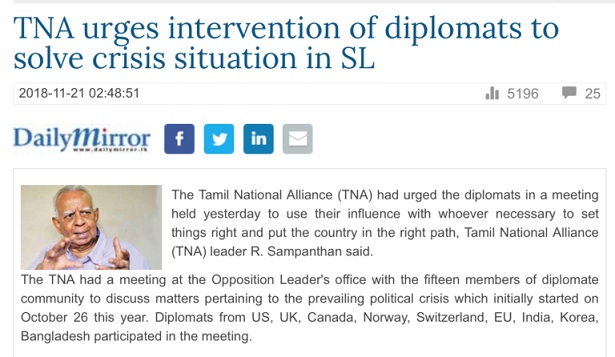 The Daily Mirror of 21 November 2018 reported that the Tamil National Alliance had urged diplomats to use their influence ‘with whoever necessary’ to put the country in the right path, whatever that means. This followed a meeting with 15 diplomats on what they all want to present as a ‘political crisis’. However, what was TNA doing throughout decades of LTTE terror not forgetting that TNA was an alliance created by LTTE in 2001? Did TNA seek intervention to stop LTTE from killing innocent unarmed people? Did TNA stop any Tamil child from being kidnapped & turned into a LTTE child soldier? What has TNA actually done for the betterment of the Tamil people? Since 2012 every budget allocation to TNA for development of the North is not spent & returns to the Treasury while TNA MPs & Chief Minister love to travel the world on a complaining campaign crying crocodile tears on slow development in the North. Tamils are waking up to the TNA lies & will be in for some surprising outcomes soon.

Why didn’t TNA seek ‘international intervention’ when Central Bank was robbed in broad daylight or when elections were not held for over 2 ½ years, why were the international community silent when RanilW was appointed PM with just 42 seats? When LTTE continue to be banned in 32 countries why was the international community mum on UNP MP Vijayakala’s public call for the return of LTTE? Why was everyone silent when good governance promised 25 MPs which became 100 after a few months! There is nothing called selective democracy & if entities claiming to be unbiased & impartial are silent when major faux pas are committed, they have no moral right to pick & choose which incidents they decide to interfere in.

Diplomats do not have a choice in liking or disliking the host country they are assigned to. Whether diplomats like or dislike the face of a host country’s President or Prime Minister is not the problem of the host country or even the government that assigns them. If these diplomats hate the sight of the present PM, they are more than welcome to ask their governments to recall them & replace another.

Therefore, it is not the business of these diplomats to agree or disagree to how a PM was appointed, why Parliament was prorogued or dissolved or what the judges are going to decide. Just as the bribe taker is as guilty as the bribe giver, not only are the diplomats at fault for interfering but the Sri Lankan MPs inviting them to interfere are equally guilty.

It is not in the job description of diplomats to interfere in the internal affairs of a sovereign country. That much is given in black & white in the Vienna Convention on Diplomatic Relations (1961) Article 41. Additionally, Article 2.7 of the Charter of the United Nations also provides that – Nothing contained in the present Charter shall authorize the United Nations to intervene in matters which are essentially within the domestic jurisdiction of any state”

The only turbulence in the country is being created by these foreign forces & the local groups they are funding…some are now supposed to be fasting to death, others are indulging in street protests demanding democracy but all conveniently ignoring the fact that UNP TNA JVP CPA and the democracy preachers are the ones that filed petitions against going for an election – why don’t they go demonstrate outside their offices first. Thankfully, these are the same faces that have been recognized as anti-national forces over the years and the general public do not take any of their antics seriously.

We do not dictate how Donald Trump should rule America, we do not interfere in how he handles the feuds with Congress, we do not tell him how to talk to media! how to handle immigrants, South Korea, Syria or Iran, we don’t tell Theresa May how to handle Brexit, we haven’t interfered in France’s fuel dispute & public backlash… in short we don’t tell countries how to run their governments and we expect the same respect from these foreign countries that boast of being the beacons of virtue, democracy, human rights & diplomacy. By their actions we are beginning to wonder if they even know the meaning of the terms they use.

If at all TNA should be seeking international intervention, it is to request them to ask RanilW to leave Temple Trees which he has been illegally occupying since 26 October 2018. Without anyone putting a case against his removal in any court and with RanilW sacked by gazette notification, there is little anyone can say that his removal is illegal.