Where were the Rule of Law/Democracy preachers when Mrs. Sirimavo Bandaranaike’s civic rights removed in 1980 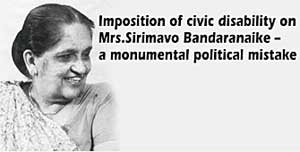 Adding to piling examples of flouting parliamentary democracy by the UNP leadership was the removal of civic rights of Mrs. Sirimavo Bandaranaike, the world’s first female Prime Minister on frivolous & cooked up corruption charges merely to prevent her from contesting elections. The decision to go to the extent of removing civic rights of one’s opponent signaled the start of the decline of democratic values & the beginning of revenge & manipulative politics. The timeline of revenge can be seen from the manner that no sooner the new constitution was adopted on 7 September 1978 the UNP Government tweaks the constitution, influences judiciary & even changes Bills to remove political opponents by even going to the extent of removing their civic rights. Can this party be called upholding democratic values or given that the values that the democratic preachers of the West say & do are also the same, UNP finds perfect compatibility with them!

That JR Jayawardena intended to take action against Mrs. Bandaranaike was evident in his appointment of a Special Presidential Commission on 29 March 1978 with Supreme Court Judges Justice Sharvananda & J G T Weeraratne & K C E de Alwis. Government lawyers were headed by A C de Zoysa an active member of the UNP Working Committee. It was no different to the Good Governance government appointing 3 UNP lawyers to exonerate then PM Ranil from any role in the Central Bank Bond Scam.

The 2nd Republican Constitution was adopted on 7 September 1978. Judiciary was manipulated promoting, demoting & even discontinuing judges of the Supreme Court & High Court.

The Special Presidential Commission presented Mrs. B with 10 charges of abuse/misuse of power, corruption. She challenged the jurisdiction of the Special Court in the Court of Appeal. Judges Wimalaratne, Vythialingam & Colin Thome granted a Writ of Prohibition against the Commission on retrospective grounds. JR Jayawardena responded by passing 2 Bills under ‘urgent in the national interest’. The JR appointed Special Presidential Commission to remove Mrs. B’s civic rights looks very similar to the illegal FCID created by his nephew Ranil.

1st Bill declared null & void the judgment of the Court of Appeal favoring Mrs. B

2nd Bill cited 1st Amendment in new constitution that deprived Court of Appeal of its jurisdiction in Writ applications & Amendment was made Retroactive from 7 Sept 1978.

Mrs.B described the action as “This was the first time in the history of this country when Parliament declared void a judgement of one of the Superior Courts of this country.” (7 May 1980) She was denied right to defend herself while the Courts were denied provision to take up such appeals.

It was a slap to the Judiciary & showed UNPs disregard for Rule of Law & unrelenting revenge against political opponents.

What is also noteworthy is that the Bill presented in parliament & referred to the Supreme Court for opinion on 16 November 1978 was NOT the same Bill that was signed off by the Speaker. A vital clause that was passed by Speaker was not included into the Bill sent to Supreme Court. Section 21A was not in the Bill that JR Government presented to Supreme Court. This has eerie similarities to the manner that Bills have been passed by the Ranil Wickremasinghe Government since August 2015 & warrants re-scrutiny by a new government. The Speaker in 1980 was Bakeer Makar.

Making a historic statement in parliament, she called the Resolution as aiming to assassinate her politically & an act of revenge. She left the Chambers almost in tears.

We must raise our hats to TULF leader & Leader of the Opposition A Amirthalingam addressing Parliament on the same day pleaded not to remove Mrs B’s civic rights.

Amirthalingam debated: …the only forum before which political offences of this type can be agitated is the forum of the hustings. The people have given the verdict. People have returned Sirimavo Bandaranaike to this House. You must respect the judgment passed by the masses of Attanagalla. You have no right now to sit in judgment on what the voters of Attanagalla have done. Retrospectively and retro-actively you are creating offences and are meting out punishment which is not in keeping with the fundamental rights you have guaranteed and which are a violation of the Universal Charter of Human Rights”.

That was not all that UNP Government went on to do. The UNP amended the Election Law to include that persons whose civic rights were removed could not campaign or participate in parliamentary or presidential elections. It was really no different to the 19a insertion that was meant to prevent Mahinda Rajapakse contesting another term or the former defense secretary contesting as dual citizen.

The removal of civic rights was a violation of Article 25 of the International Covenant on Civil & Political Rights every citizen shall have the right to participate in public life, including the right to vote and to be elected without unreasonable restrictions”

Anticipating national outcry & not wishing that to affect the UNP—JR Jayawardena banned public protests another great ‘democratic value’ being enforced!

When SLFPers gathered outside party headquarters in Maradana, the UNP ‘welcome’ to them according to D. G. de L. Karunaratne was  notorious thousands of UNP thugs, armed with cycle-chains, knives an clubs, descended on the unarmed protesters, attacked them mercilessly and robbed whatever they could lay their hands on”. Such was the human rights delivered by UNP to unarmed protesters. How many today even know of this dark past or as always it is excused as being part of the past to be forgotten.

V.P Vittachchi claims that JR’s actions were nothing but ‘fear of Mrs. Bandaranaike’s charisma’ JR’s nephews actions have startling similarities for fear of Rajapakse’s charisma too.

JR’s revenge was such that he used the Public Security Ordinance to take over the SLFP headquarters in August 1981.

The UNP which pledged to establish a Dharmista (Righteous) society made a mockery of the hallowed concept. Driven by an insatiable thirst for power and revenge they manipulated and prostituted legal, judicial, and constitutional processes for 17 long years” D. G. de L. Karunaratne

The lesson UNP keeps forgetting is – you can bring all the amendments & change all laws to one’s advantage but if the people back a leader, the People’s wishes run supreme. Try as UNP did Mrs. B remained popular among the masses as did Mahinda Rajapakse. What UNP needs to wake up to is that no political movement with a mass base can be permanently destroyed by attacking its leader.

The historic win in 1994 for the UPFA is one such example how People will rally behind the underdog. In an ironic twist of fate, while Chandrika Bandaranaike daughter of Sirimavo Bandaranaike became Sri Lanka’s First Female Executive President in 1994 she made her mother Mrs. Sirimavo Bandaranaike as Prime Minister & JR Jayawardena who removed her civic rights was alive to watch.

In a similar twist of irony, JR’s nephew PM Ranil Wickremasinghe who thought 19a would see the last of Mahinda Rajapakse suddenly finds he is ousted in October 2018 & Mahinda Rajapakse is placed as Prime Minister.