The International Truth & Justice Project (Sri Lanka) administered under EU funded Foundation for Human Rights in South Africa, has apologized to Brig. Ravindra Dias for wrongfully using his picture claiming it to be Maj. General Suresh Salley, the Director of Sri Lanka State Intelligence Service. This apology came 2 months after a letter of demand was sent by attorneys representing Brig. Dias to Sooka & ITJP(SL) on 6 July 2020. A sum of Rs.5,000,000 has also been demanded from Sooka and/or ITJP(SL). Naturally, the LTTE lobbyis embarrassed & what do they do about it – pluck out the name of Sri Lankan High Commissions defense attache & demand UK declare Brig. Bothota ‘persona non grata’ knowing he is anyway returning to Sri Lanka having completed his tenure. This they plan to turn into a major tiger achievement. Were these tiger lobbies in slumber for 2 years that Brig. Bothota was serving as defense attache in UK? How is it that after 2 years they suddenly remember Brig. Bothota is a ‘war criminal’ only after egg has got thrown at their comrade.  Sooka & ITJP(SL)’s troubles are not over. Obviously, this looks to be a shoddy damage control tactic by the tiger lobby in the light of the embarrassment Sooka has had to face and there’s more to come as well. Maj. Gen. Suresh Salley is also taking Sooka & ITJP(SL) to court.

There is nothing to be surprised about the inaccuracies & fallacious information of this tiger comrade. The Ban Ki Moon Panel of Expert Report of 2011 is littered in it.

The Sooka bandwagon gets agitated at the mention of Rajapakse’s and they must surely be having no sleep now that the Rajapakse’s are holding the top positions of Government, elected by the People to do so.

Just as Maj. Gen. Suresh Salley became a Sooka/ITJP(SL) target after his promotion, Brig. Bothota is now target after 2 years of serving as Sri Lanka’s defense attaché to UK’s Sri Lanka high commission and returning after tenure is over. In both cases, Sooka/ITJP has woken up from slumber having forgotten that Maj. Gen. Suresh Salley was in service before 2009 & after 2009 while Brig. Bothota has been in UK for the past 2 years.

There are some confusions that remain unanswered.

Yasmin Sooka was Executive Director from 2001 to September 2019.

The International Truth & Justice Project has no mention in the Foundation for Human Rights website but in the ITJP(SL) website it claims ITJP(SL) is administered by FHR.

Does this mean the ITJP(SL) is also funded by EU?

If so, can EU explain why human rights funding for South Africa should have Sri Lanka project plugged into it?

Sooka was Executive Director of Foundation for Human Rights from 2001 to September 2019.

Thereafter Hanif Vally who served as Deputy Director was made Director and a facebook post on 31 August 2020 has promoted Hanif Vally as Foundation for Human Rights’ Executive Director. 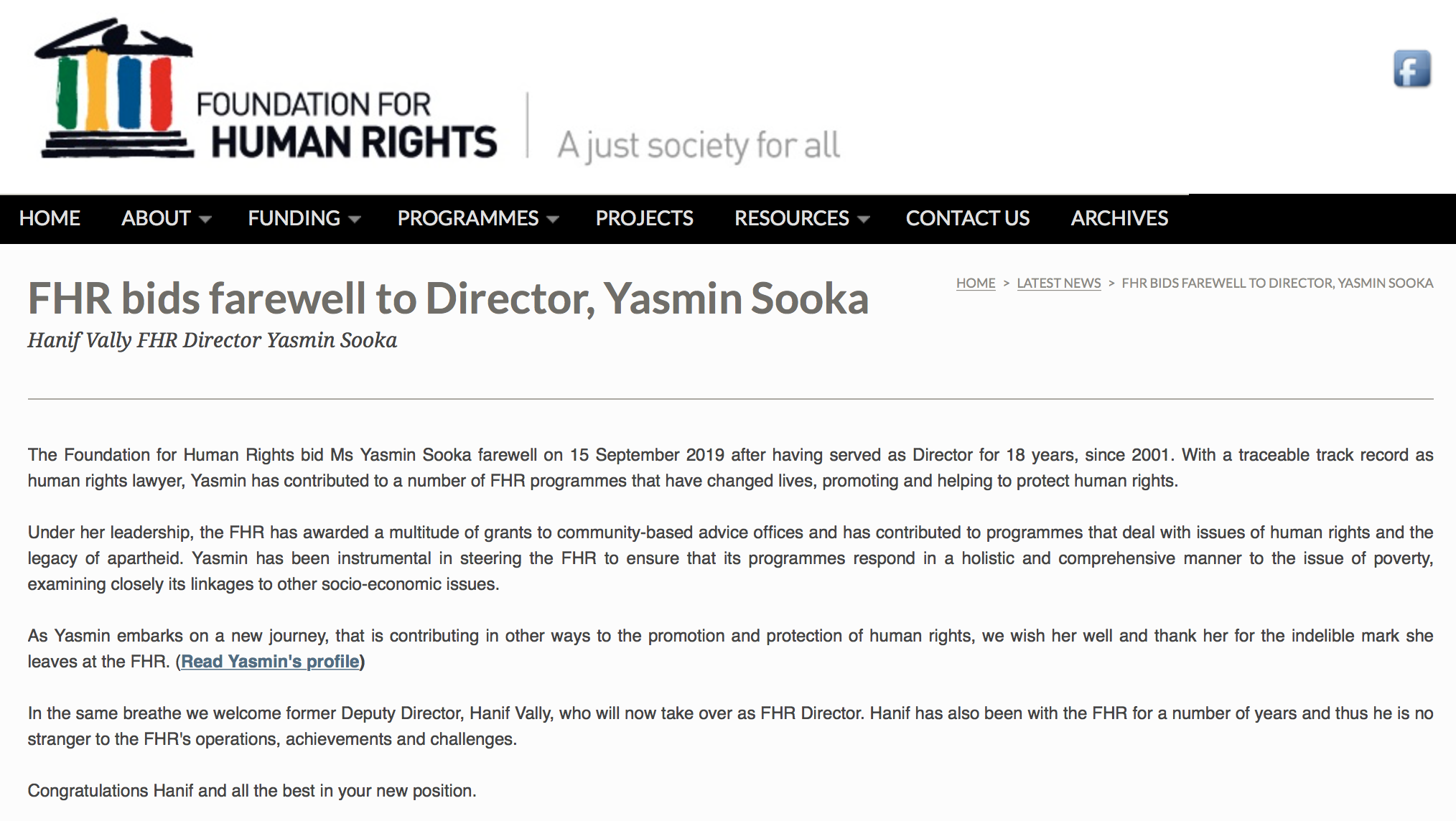 So the questions are

In the meanwhile, the UK Government should not get too excited over the recent tiger communiques, this is just a face saving exercise by them to cover up the embarrassment in having to apologize to a Sri Lankan military officer by diverting attention to demanding the declaration of persona non grata of Sri Lanka’s defense attaché who is anyway departing UK as his tenure has ended.