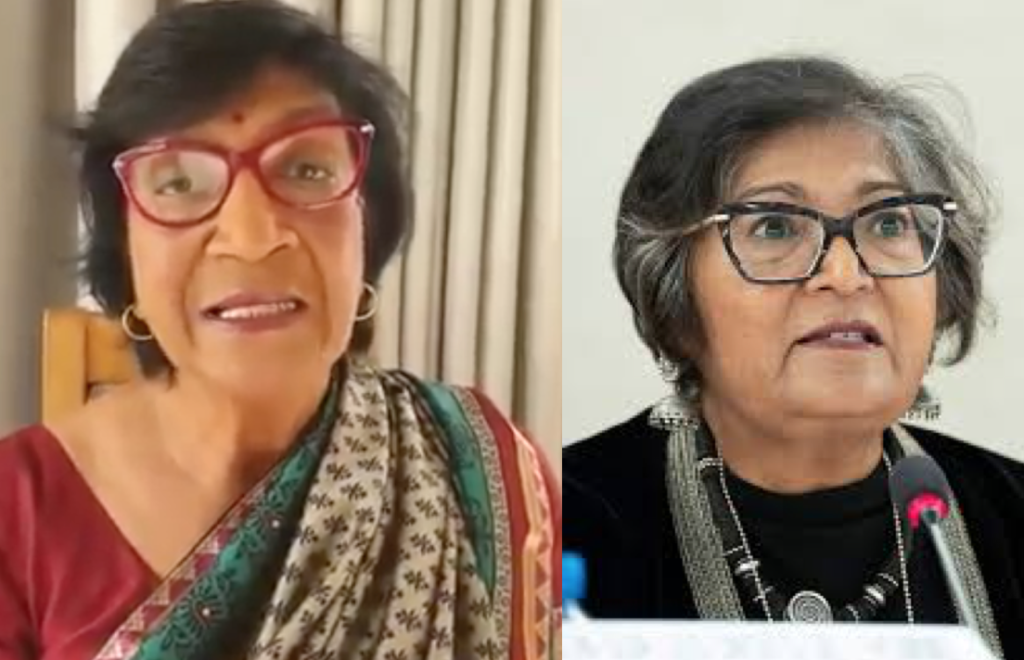 Individuals are not selected for international positions to go on witch-hunts especially against sovereign countries and elected leaders. The international entity, appointing them are also responsible to see if those they appoint exceed their mandate. International entities cannot simply watch their appointees abuse their portfolio especially against a sovereign country & a UN member state. In so doing, it only shows that the international entities are also party to aiding abetting the bias. Two South Africans, the former UNHRC head and the EU employee paid to look into the welfare of South Africans are both obsessed with Sri Lanka. We would like to know why. The former head of the UNHRC being a Tamil ethnic-origin, should have recused herself from judging Sri Lanka as you cannot be the judge of your own case. As a lawyer, she should have known this. The other, also hailing from South Africa ever since sitting as a Panel Member of the personally commissioned Ban K Moon report, has been virtually 24×7 out to find some fault against Sri Lanka. People elected for international and public roles are not paid to demonize countries and character assassinate the leaders or those they appoint. The UN or the EU cannot brush off their actions without a proper investigation. The GoSL through its foreign ministry must seek action from both the UN and the EU & question their abuse of position. They have no right to abuse their position to demonize Sri Lanka internationally, character assassinate Sri Lanka’s elected leaders and criminalize members of Sri Lanka’s Armed Forces without evidence.

Appearing on a 20 May 2020 with a video message relayed to the world, the former UNHRC head proved and self-exposed her apparent bias. Her comments confirmed all that was said against her and the manner she functioned since 2008 as head of the UNHRC. That she did not table the personally commissioned Ban Ki Moon report (which was not mandated by either UNGA or UNSC) in the UN General Assembly or the UN Security Council or the OHCHR but extensively quoted from it both orally and in her written statements confirms her apparent bias. She championed the demand for an investigation that was always one-sided and against Sri Lanka’s Armed Forces extending the investigation beyond the mandated period covering 2002-2009 to 2011 and including aspects that were never part of the conflict as a means to use the UN system to rebuke a sovereign UN member state. Her anger against Sri Lanka & the Armed Forces was such that she has created a precedent – the first time the UN was venturing to investigate a conflict that had concluded. This is likely to impact other weaker UN member states adversely too.

The legality of the OISL investigation on Sri Lanka based on a personally commissioned report never tabled in UNGA, UNSC or UNHRC for Sri Lanka to officially respond to, must be answered by UN legal team.

Her office was used to embarrass Sri Lanka’s appointees who were former Armed Forces commanders. After listening to her May 2020 message, we can look back and understand the reasons for her bias which was nothing but bordering on revenge for defeating the LTTE. She had no word of sympathy for the many Sinhalese and Muslims killed by LTTE. No wonder she did not visit a single Sinhalese or Muslim when she visited Sri Lanka. Her bias was as open back then as it is now. Listening to her May 2020 speech against all her official and media statements against Sri Lanka since 2008 will showcase her bias.

How far she has followed due process vis a vis Sri Lanka is further questioned – https://www.spur.asn.au/2018/02/07/has-the-head-of-ohchr-followed-the-due-process-on-sri-lanka/

The other South African is a EU employee paid to look into the welfare of South Africans. She was selected by former UN Secretary General to be on a personally commissioned panel to appraise him of the last 3 months of Sri Lanka’s conflict. The 3 members in their report claimed LTTE “the most disciplined and most nationalist of the Tamil militant groups”! The report only said “there could have been as many as 40,000 civilian deaths.” But the propaganda twisted it to claim 40,000 were killed. We continue to challenge this as DEAD LTTE cannot be portrayed as GENOCIDE of civilians. Whether civilians or LTTE, no one has yet produced evidence of 40,000 dead. The same report that referred to ‘credible allegations’ was soon drummed as ‘credible evidence’ against Sri Lanka international by media & human rights groups. The level of bias was unbelievable and unacceptable.

What EU must clarify with the GoSL is on what grounds they are paying the Executive Director of the Foundation for Human Rights in South Africa to carry out a sub-unit against ONE COUNTRY by the name International Truth & Justice Project-Sri Lanka? ITJP is eternally issuing reports against Sri Lanka. She exposed herself when she began attending regular events of proscribed LTTE fronts who referred to her as ‘our comrade’, she was put on the Advisory Council of another campaign for ‘peace and justice’ signing petitions in 2014 in which pro-LTTE TNA were also signatory.http://dbsjeyaraj.com/dbsj/archives/28557. Her reports are always timed to appear before a UN session. She purposely mixes civilians with LTTE terrorists in her selective reports. Her job role needs to also be investigated for no international position can be abused to bring ridicule and denigrate a sovereign nation with baseless lies spread by well-funded propaganda.

Today, all of the organizations that are running anti-Sri Lanka campaigns were all established after the defeat of LTTE and Prabakaran and utilizing 18 May to commemorate “genocide” of LTTE on the guise of remembering civilians. Proof of tht is seen in the LTTE paraphernalia adorning all the commemorative functions. All this is nothing but a means to keep alive the international LTTE kitty that generates $400m annual profits and the international illegal/legal networks that generate the income. Drawing high profile international personalities is a safe-net for LTTE fronts to protect their interests using their association as cover.

If their apparent bias is on account of some form of influence, Sri Lanka deserves an apology after UN & EU investigate their roles. Personal biases cannot dent the good name of a sovereign nation & international relations & diplomacy.

Some of the reports by Sri Lanka

Factual Appraisal of the OISL