LTTE terrorism was defeated in May 2009. Without a charismatic terrorist leader, LTTE is unlikely to resurface. But, the efforts to create a Tamil Eelam or a Greater Tamil Eelam encompassing Tamil Nadu has scope as it is aligned to geopolitical goals of those that sponsored Tamil militancy & separatism. Global proscriptions of LTTE did little to counter the LTTE fronts operating overseas since LTTE defeat. That these entities were operating for a reason is obvious. The security apparatus in both India & Sri Lanka may deal with terrorist elements effectively but, both countries must be now aware that political manipulations steered by greater powers is now more powerful than the gun! Therefore, India cannot ignore the writings on the wall. The sudden appeal to de-proscribe LTTE in UK is no coincidence.

India is only an US ally to satisfy US hegemonic designs for Asia, which includes the eventual plan to break up India.

Destabalizing Sri Lanka using the Tamil card by India has karmic effects. It’s the very card the West via UN will now use against India where 95% of world Tamils live. India cannot forget that Tamils have played a historical role as sepoy for the West. India’s role against Sri Lanka in UNHRC will soon backfire. Tamil Nadu where Kamala Harris has her origins are suddenly breaking coconuts for her victory, no different to how army commander Fonseka had coconuts broken for his victory by Tamils in Sri Lanka in 2010. India cannot ignore her statement during the campaign trail on Kashmir. US will not bat an eyelid to say the same for Tamil Nadu. India cannot also ignore the faith foot-soldiers already making cozy along the coastal belt expanding their flock in preparation for this eventuality. The manner they are able to brainwash souls means they will upgrade that to demanding self-determination from India kick starting the Greater Eelam project. With MCC not getting signed in Sri Lanka, US will no doubt be pushing for optional plans! 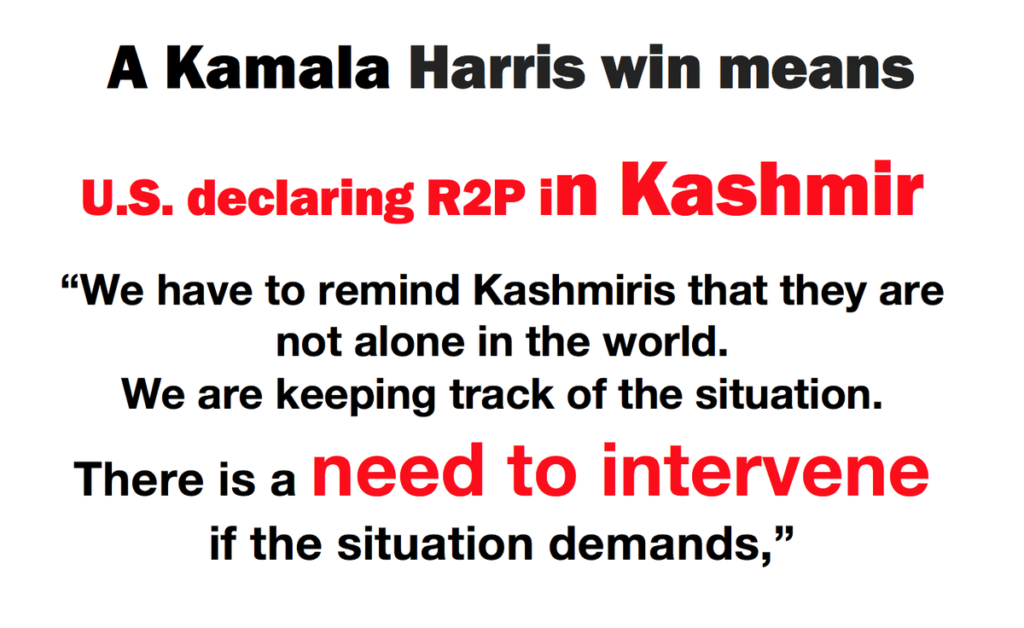 This statement together with that which US Congressmen Edolphus Towns said in 1998 cannot be ignored by India. Intervention against India is thus very much on the cards and on the minds of the West. 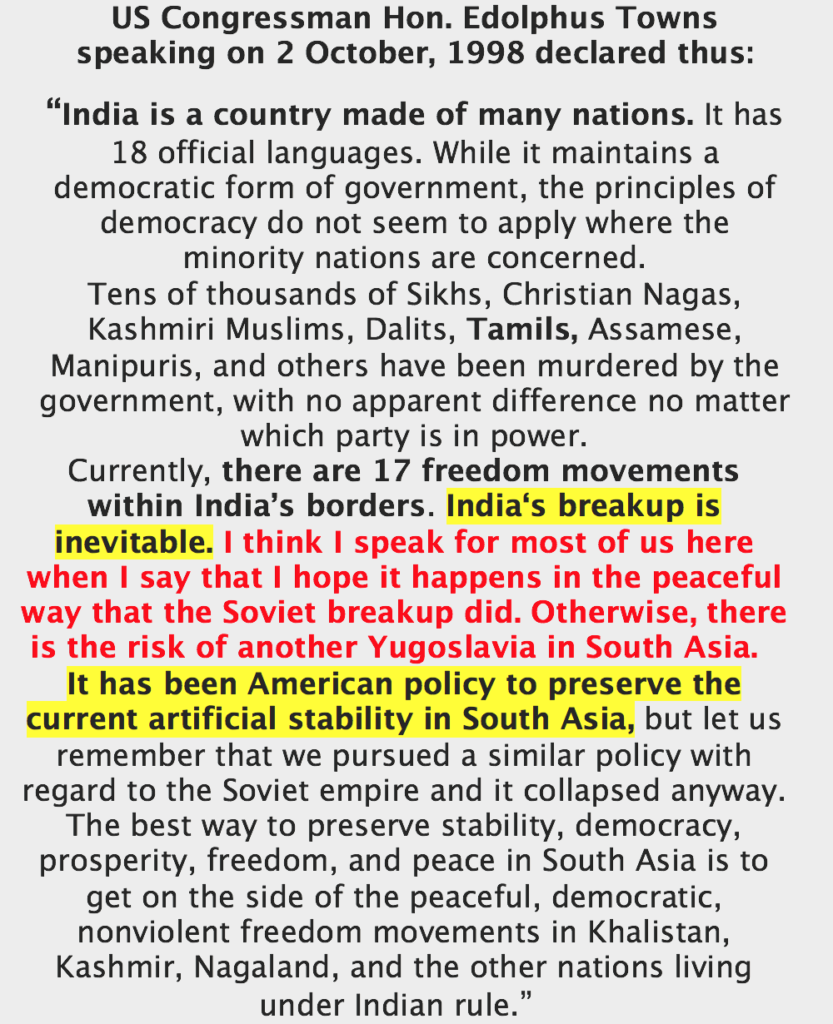 It is in this scenario that India must seriously take note of US-based, TGTE appeal to a UK Tribunal to de-proscribe the LTTE taking advantage of the lapses by the British Government. While the British Government is not bound to accept the conclusions of the British tribunal, it means that the project to use Tamil lobby against both Sri Lanka & India by the West is still alive. While, the West doesn’t have the terrorist element to peddle, the political element has wider dangers and consequences.

The opening of a US consulate in Maldives must add to India’s concern. Plenty of isolated islands will be the haven for jihadi training & dispatch.

Covid will be used as a camouflage and excuse to justify US military presence across covid-19 affected countries using the ruse of ‘humanitarian’ assistance. Pompeo was seen emphasizing this across his Asian tour.

India has gone through much – alliance with Russia in the 1980s, simultaneously a period that India lent training to Tamil militancy, the assassination of Indira Gandhi in 1984, assassination of her son Rajiv 7 years later in 1991. The slow shift towards US with dialogue commencing immediately after defeat of LTTE in June 2010 with India being called ‘an indispensable partner’. The following year US-Indo Strategic Dialogue timed with the US Pivot to Asia strategy of Obama-Hillary. Military ties announced in 2012 the very year US brought bogus UNHRC Resolutions against Sri Lanka. Modi visits US in 2014, Obama arrives in India in 2015. Same time West & India influenced Nepal’s constitution leading to an embargo & humanitarian crisis. Regime change in Sri Lanka was orchestrated by both India & US also in 2015. India becomes America’s ‘best partner’ elevated in 2016 as a major defense partner. Modi flies to US in 2017 where US-Indo strategic partnership was to play a ‘critical part’ in US South Asia strategy and then in 2018 the Communications Compatibility & Security Agreement (COMCASA) is signed. US & India saw fit to remove the importance of Asia & Christen the region US-Indo Pacific. Containing China is primarily to maintain US hegemony fast disappearing from US and in this quest the stampede for natural resource grab would eventually mean US will target India too. Having signed military agreements with US, India is compromising its own national security independence. India can never dictate military strategy to US and instead India will find itself taking orders from US. India cannot forget that there are no permanent friends but permanent self-interests.

India must take a step back & review how far India has compromised its national security to partner with US against China. If India is also targeted to be balkanized how far can India now negate all of the security pacts entered into with US when US will now use a host of tools against India sooner than later.

Karma will mean all of the threats Sri Lanka had to weather will soon get transferred to India. Jihadists, faith-foot soldiers & LTTE diasporawith cahoots in Tamil Nadu will be India’s coming trouble.

Thus, India must view the sudden appeal by TGTE to de-proscribe LTTE, to a UK Appeals Commission as nothing coincidental. Karma again will mean what India did to create Bangladesh is on the cards for a greater Tamil Eelam that will become West’s satellite base in South Asia. If UK de-proscribes LTTE, US, EU will follow suit. The UN has all the paper work prepared. LTTE terror kitty has retained the best of international lawyers. While India’s politicians prostrate at the quest of being seen on par with the West, Sri Lanka’s politicians can easily be swayed with deals. Both scenarios are detrimental to the sovereignty of both India & Sri Lanka.

India & Sri Lanka must realize this.

Tamils in either Sri Lanka or Tamil Nadu don’t want Tamil Eelam but the LTTE Diaspora are demanding it on behalf of the West. All of its nefarious activities are well known to the West – if the West has been as honorable about the war on terror & actions against anyone materially supporting terror, none of the LTTE diaspora entities would be functioning on their shores with blessings of their MPs. When foreign MPs attend LTTE diaspora functions, are not shy to issue statements on behalf of them, they even have sword groups operating freely across UK & France, the Western Governments also allow their Parliaments to be used for LTTE publicity – do we really need to guess who has adopted the tiger and taming the tiger for future instructions! India must note that the Indian diaspora has not been able to do the magic that LTTE diaspora has done with Western governments simply because they are West’s pawn.

Bharath became divided as Pakistan & Bangladesh – Tamil Nadu will be the 3rdtime lucky. With each division or separation of India – India will lose its super power status and will have to say goodbye for any global supremacy aspirations. That Tamil Nadu never aligned to the goals and aspirations of India is nothing we need to remind India’s Central Government. 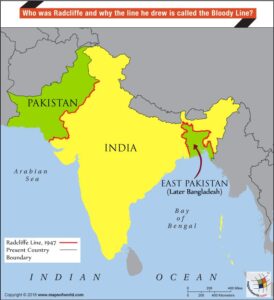 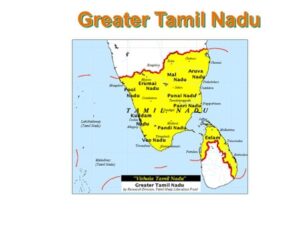 India can ignore warnings but India will note that in siding against Sri Lanka at the UNHRC and then abstaining in 2014 showed wisdom falling on India realizing that coming colours was not good. This resolution should now immediately echo Kamala Harris’s US ‘intervention’ in Kashmir and realize that US ‘intervention’ in Tamil Nadu is more than a possibility too.

The West using LTTE Diaspora has made the first move – it’s now India’s turn to shift its Queen.