Why Asia must defend Myanmar 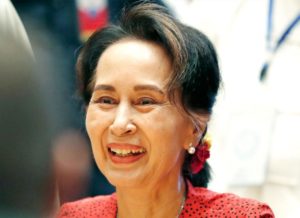 The International Court of Justice was set up in 1946 to settle international disputes. ICJ is taking up a complaint made by little known Muslim majority Gambia on behalf of the 57 OIC member states against Myanmar. Aung San Su Kii, Myanmar’s leader along with Government officials and scores of supporters arrived in Hague and faced the ICJ on 10th December 2019. ICJ cannot evade answering the legal status of Rohingyas in Myanmar vis a vis the colonial legacy that Myanmar carries. Is Rohingya issue an excuse for Western imperialists and its OIC partners to enter Asia with real intent to encircle China/Russia while as an additional bonus acquiring Asia’s natural resources/oil etc? Should Asia not be concerned about the geopolitical aspect of the Rohingya issue, a factor India must be concerned about too. Both India & Myanmar are on line to be balkanized as western imperialist with their Islamic state partners strategically draw the pawns on the chessboard.

The British colony of Burma was made part of the British run-state in India (though Burma was never part of pre-colonial British India), the Empire of India, from 1824 to 1937. A decade before India was given independence Burma was separated from the Indian Empire in 1937. Burma was actually the geographically largest province in India, it only had 9 million people in 1908. Its neighbor Bengal (East Bengal became Bangladesh) had 75million people. In 1872, when the earliest reliable census was taken, the highest concentrations of Muslims (more than 70%) were found in eastern Bengal. It is only from the late sixteenth century, and after the Mughal conquest (1574), that solid evidence of a Muslim peasant population anywhere in Bengal.

Also noteworthy is the formation of the Muslim League in 1906 demanding a separate Muslim ‘homeland’ in British India.

Artificial borders drawn by colonial invaders is one of the main reasons for contentions between nations even today. Forced migrations and dumping of indentured labor is another factor that has given rise to more ethnic problems in former colonies. Colonial rulers of these nations must take accountability for these intended divide and rule policies. Many a separatist ethno-religious movement today were encouraged and covertly funded by these countries a policy they continue to practice even in 21st century. Trail of insurgent/terrorist movements will take you to one or more of the western imperial or OIC member states who secretly support them. Drive for global hegemony, land grab in resource-rich countries are very much the same reason then and now. We cannot be naïve not to link the similarities.

An additional feature has become the obsession with China’s development. The aim is to get to China and Russia either through Myanmar or India. These endeavors are happening parallel through various modus operandi. Unfortunately, India has invited the enemy to Asia and must be regretting now.

It is reason why Asia must back Myanmar including the Muslim majority countries for no Rohingya can be more important than helping turn Asia into a war zone similar to Middle East. Once countries allow an enemy that does not think twice to drop chemical bombs/drones etc no ICJ or ICC can stop them.

The crime of ‘Genocide’ means acts committed with the intent to destroy, in whole or in part, a national or racial group. It has become fashionable to use term ‘genocide’ but population statistics cannot prove any reduction in population figures for Rohingyas. However, the ‘intent to destroy a racial group’ did very much take place by colonial/Islamic expansionists wherein they used to sword to exterminate entire populations. Who is going to hold their crimes to account?

Presume the ‘international bodies’ deem it is old news, what about the illegal invasions & killings by carpet bombings, chemical bombings, atomic bombs, drone killings that have killed millions too in this side of the century? Were these not committed by Western/Middle East nations – the most recent being the bombing campaign in Yemen. How is it that these acts do not make it to the ‘genocide’ table? Why are these not investigated or action taken against them? Is it because their political power and financial influence makes all others lesser than them?

How innocent are Rohingyas

Are Rohingyas illegal immigrants, did colonial Britain include them in their census are questions that need firm answers. How innocent are Rohingyas when it is having an armed group & has also committed heinous crimes against Myanmar people in particular Buddhist theros. Are OIC-member states arming the Rohingyas as ICG report 2016 confirms.

Can Gambia explain how Arakan Rohingya Salvation Army if innocent is carrying ARMS & AMMUNITION and also engaged in attacks? Who provides weaponry to ARSA and who is paying for this supply?

Myanmar cannot be accused and hurled up before any international court if it is only defending its nation & people against armed militant Rohingya. If Myanmar was attacking unarmed Rohingya it would be a different story but Rohingyas are no innocent people!

Why don’t these 57 majority Muslim nations agree to give refuge to these Rohingyas in their countries and look after them as fellow Muslim nations where they would be all the happier? 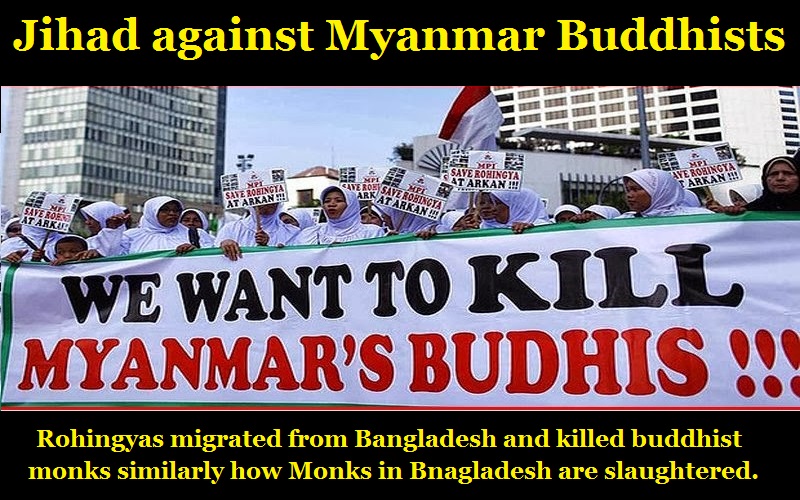 It is no secret that the Buddhist world expanded from Persia to far East Asia without forced conversion or sword.

It is also no secret that the Buddhist world has shrunk as a result of the sword used by both Islamic expansionists and Christian invaders. The Buddhist world is now down to just 5 shrinking and regularly under threat majority Buddhist nations of which Myanmar and Sri Lanka are included. It is natural that the Buddhists in these countries have every right to fear and these fears should not be laughed upon or degraded.

While ancient tactics are not used the multiple methods presently used are more sinister and dangerous and come in the cover of many insidious forms that cover the real intent (loans/grants are given with hidden message to turn the other way to incursions / politicians are bribed to also do the same / powerful international blocs ensure international pressure to prevent any legal actions taken to protect the incursions).

India, China, Russia and rest of Asia must take stock of the geopolitical agenda behind using Rohingyas just as Sri Lanka’s Tamils have been used to similarly exert power to influence Sri Lanka to give in to various bullying tactics. When it is very clear that the target is China & Russia, the two barriers are India & Myanmar and it is natural that Rohingyas provide the best pawn to use to exert international pressure and presence in Myanmar as bogus conflict resolutionists whereby on the ground they will subtly plan to encircle China/Russia.

Asia must stand in solidarity with Myanmar and China, Russia and India must protect all Asian nations from numerous other manipulated tactics that will be used in time to come.