Why can’t the Sinhalese demand separate provincial councils too? 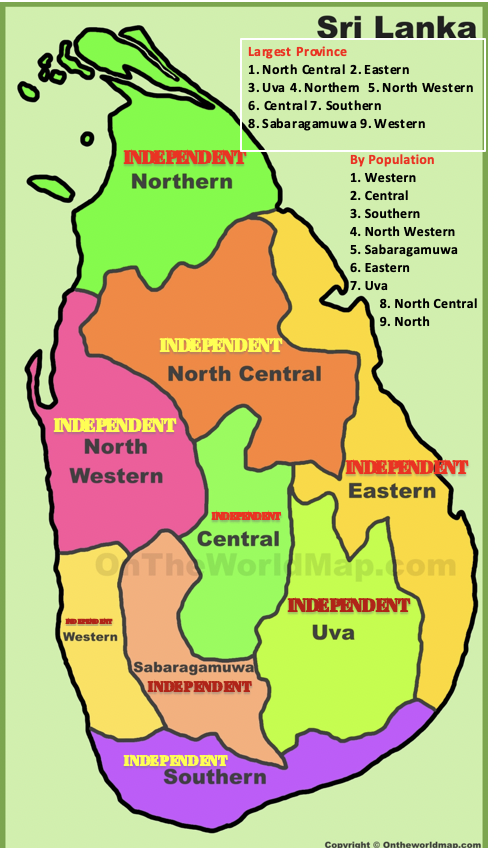 The Indo-Lanka Accord signed under duress in July 1987 with even Prabakaran held virtual hostage in Delhi until Rajiv Gandhi returned from Colombo to New Delhi, does not mention a word about 13a or devolution. All that the Indo-Lanka Accord mentions is one election for the merged North East province to be held no later than December 1988. This means the Accord only created 1 merged North East Province for an interim period, which required a referendum to be held in 1988 in the East, asking if they wished to remain merged or not. There was no reference to other provinces or elections in those provinces at all. We continue to claim that only a minority among Tamils wish to separate Sri Lanka & a minority of the majority are also promoting the same. The Majority of both Tamils & Sinhalese wish to live amongst each other as they have over centuries. Nevertheless, if Tamils can ask a separate province for themselves, why can’t Sinhalese ask for same? What if all of the 9 provinces became micro independent provinces?

The present President has openly claimed to wish to give full autonomy to the North & this would entail forsaking his powers over the Governors that he currently appoints. It would also mean that he may have to obtain visa to visit the North & be at the mercy of the North to provide his security. What a come down for any President to forsake his rule & be at the mercy of Northern Chief Minister as well as Chief Ministers of different provinces if other provinces equally demand the same demands that the North is demanding.

No province is more important than the other. If one province is getting special privileges, the other provinces should be entitled to the same privileges. The law of equality must apply.

Imagine 9 independent provinces with 2 provinces under Tamil rule & the rest ruled by Sinhalese.

Of course this also means the end of Parliamentary & Executive system currently prevalent in Sri Lanka. It means the hegemony of the Politicians who are responsible for the majority of ills in Sri Lanka is also over. They have played with fire since independence, dividing people to sustain their existence & the situation has been made worse by external players inducting local parties & individuals to stage multiple divisive programs across Sri Lanka.

The hegemony of the politicians would end but it would also mean bigger problems where mini conflicts will arise for ownership of the lands’resources & these are areas that need to be considered NOT TO ALLOW division of any part of Sri Lanka & for everyone to realize the importance of maintaining a unitary Sri Lanka.

People must look at all the possible scenarios that may occur & realize that no part of Sri Lanka should be allowed to separate, if it is allowed, then may as well separate the rest of the provinces too. The question is posed for everyone to understand the futility of the Tamil quest which is likely to lead to many more problems than solutions.

This is food for thought for the President the Parliament & even the Judiciary who are giving false hopes to the Tamils & creating more problems – if the Northern province seeks a separate provincial council, which is just another province among the other 8 provinces in Sri Lanka (a provincial system that was created by the British since 1833) why shouldn’t other provinces equally demand a separate & independent provincial council too.