Why don’t UN-West-UNHRC-TNA demand to commemorate Tamils killed by LTTE? 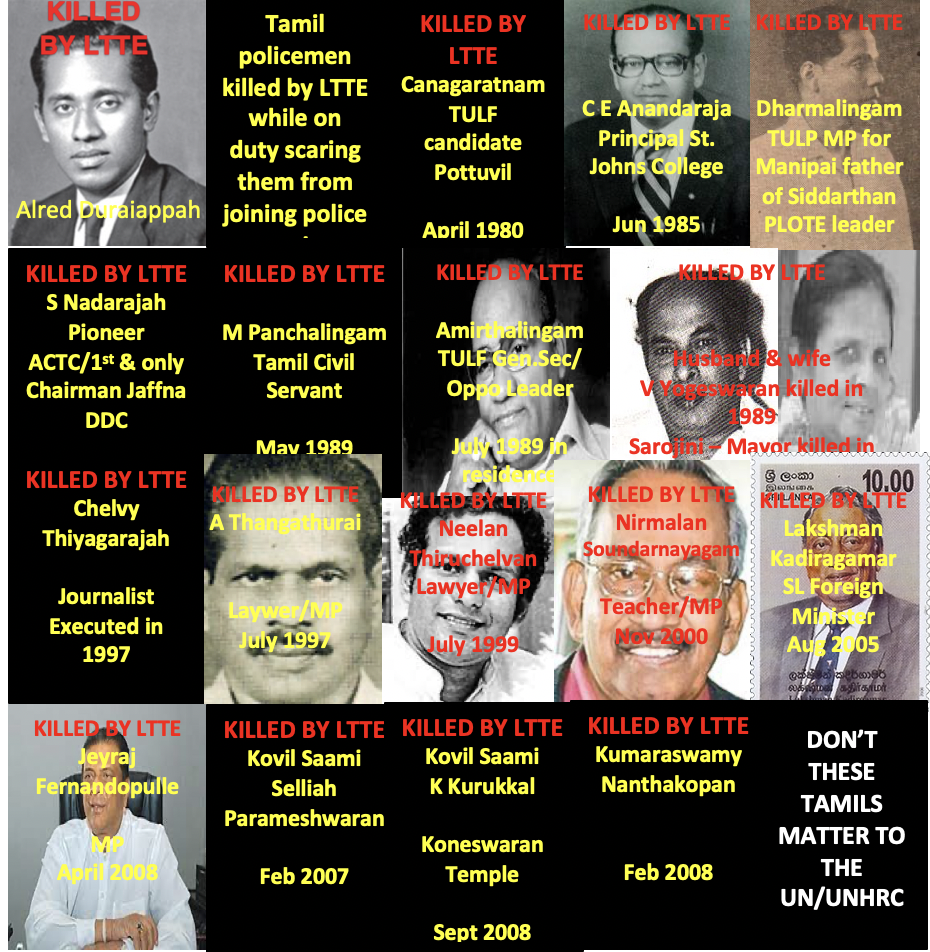 We are somewhat puzzled. Perhaps the Western diplomats – the UN & UNHRC may care to answer and put our doubts at rest. We are more than a little curious to know why the UN/UNHRC & Western diplomats attention is always directed in favor of LTTE – what about the Tamils killed by LTTE. Don’t their lives matter?

We notice the TNA, the Jaffna university academics & students, a number of Tamil organizations overseas annually hold commemorations. These commemorations we are told are for ‘civilians’ but there is something amiss. The commemorations are decorated only in LTTE colors (red & yellow), they have only LTTE flags, LTTE flower, LTTE emblems and symbols, and are held exactly on the same dates that LTTE annual events were held when Prabakaran was alive. This is an amazing coincidence.

Maaveerar Naal (Great Heroes Day) has been commemorated since 27 Nov 1989. If this is a civilian commemoration why is it fixed with a date aligned to LTTE Heroes Week which ends on Prabakaran’s birthday 26th Nov?

When western diplomats & UN are well aware of this – why do they insist the Govt allows the event? Why do Sri Lanka’s magistrates courts allow such knowing LTTE is banned still?

Have you ever heard a single diplomat or UNSG or UNHRC/OHCHR Head make reference to any Tamil killed by LTTE?

Why do they attend only LTTE events? Would they ever accept an invitation to attend a commemoration for K Sabaratnam– TELO leader or Pathmanabha– EPRLF leader or S Shanmuganathan Senior PLOTE member  or even Gopalswamy Mahendraraja (Mahaththaya) Deputy Leader of LTTE killed by Prabakaran for betraying him. He was killed alongside many of his loyalists.

Can western diplomats/UN/UNSG/UNHRC answer why 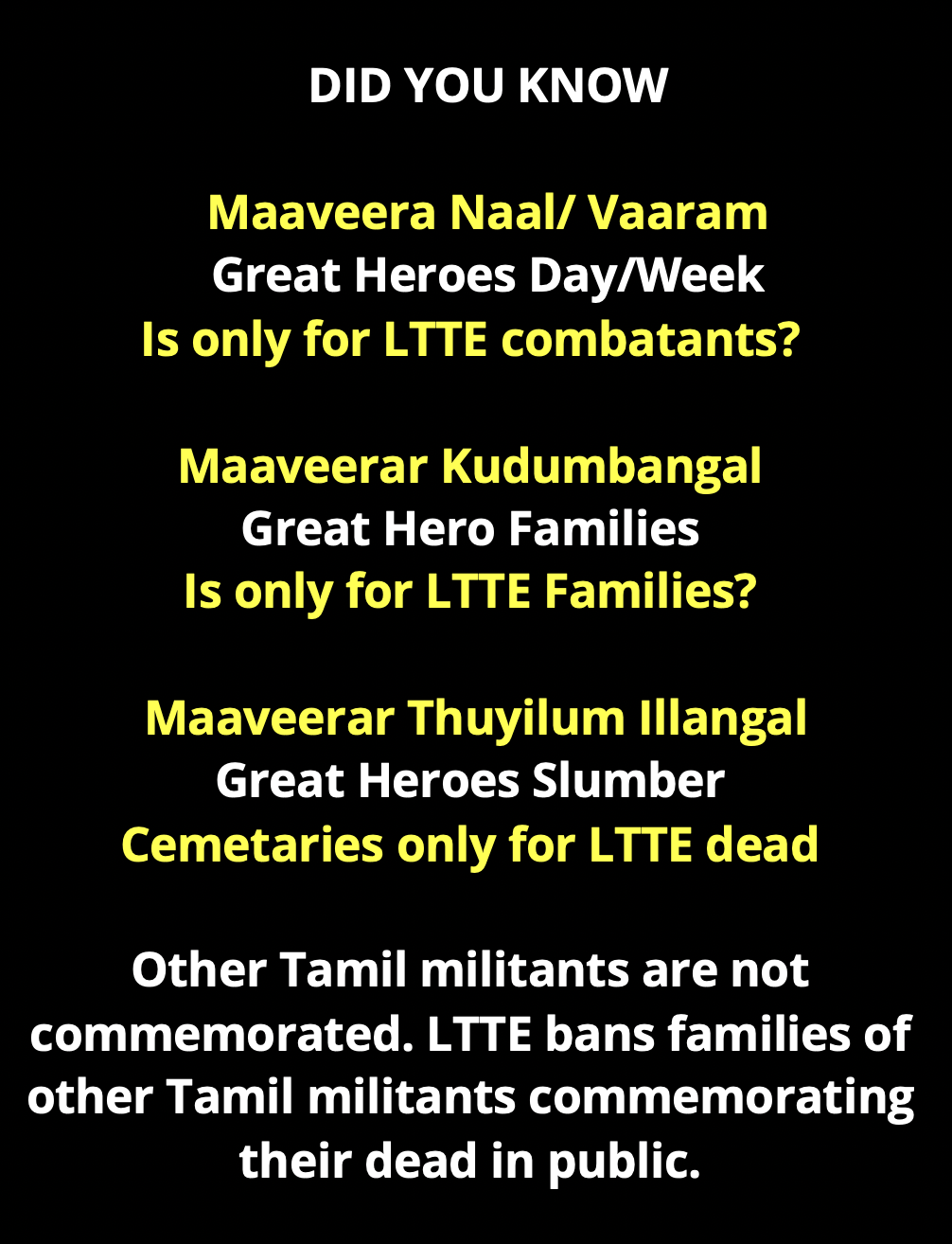 No one killed by LTTE is being commemorated – WHY?

Why is there no commemoration for these Tamils? If the western diplomats-UN-UNHRC demand that Sri Lanka allow commemoration of LTTE dead – it is high time a similar event is organized annually to commemorate Tamils killed by LTTE.

Can someone come up with an appropriate name for this annual event, please! 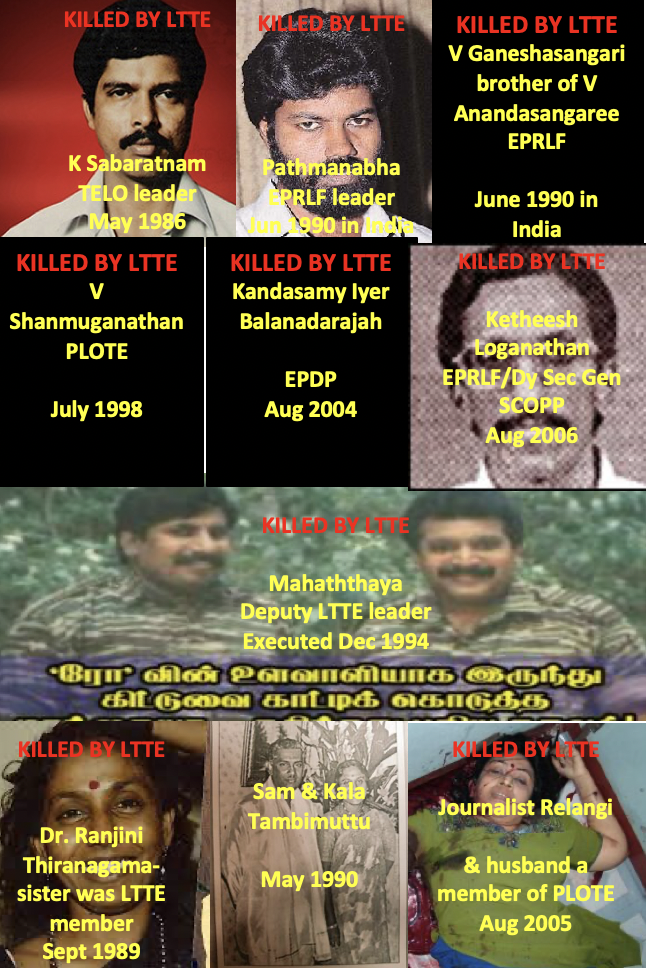 These are just a handful of faces that have been eliminated by LTTE.

Don’t they have families too?

Can’t these families mourn their dead?

Or as per Western diplomats-UN-UNHRC only LTTE are ‘civilians’?

Has the UN-UNHRC-Western diplomats raised the question as to why non-LTTE cannot mourn the dead?

Leaving aside the non-Tamils killed by LTTE, the West-UN-UNHRC should at least allow non-LTTE Tamils to mourn their dead! But it looks as if Western diplomats & UN only want LTTE dead & their families to be mourned and no one else – non-LTTE Tamils or non-Tamils!

Have you noticed that TNA MPs are mum about commemorating non-LTTE Tamils. 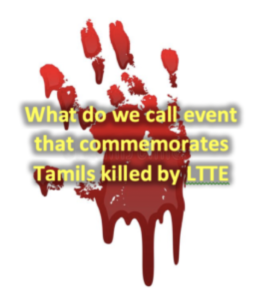 Can Sampanthan-Sumanthiran-Shanakiyan or Wigneswaran – answer