Wither the August Mandate: Why no dividends to the Nationalist Majority 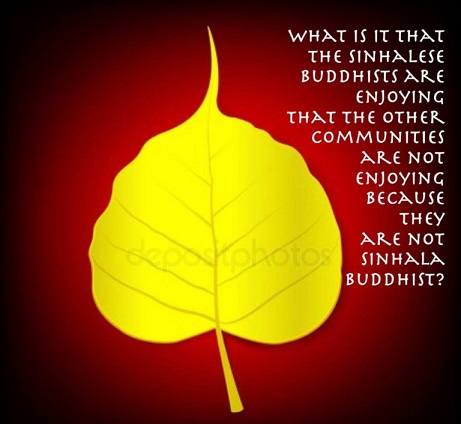 The August 2020 Parliamentary victory showed for the 2ndtime the power that ensues when the majority is united. The victors of 2015 openly declared their debt to the minorities which got translated into marginalizing the majority. Was this what the minorities really wanted? If that was not so, there was no visible voice objecting to the wave of discriminations & humiliations the majority was subject to, eventually culminating in mass murder on Easter Sunday. Come 2020, tables reversed & a magnificent 2/3 victory was delivered based on a nationalist platform. In terms of paying back, what the minorities via their leadership sought was poles apart from what the majority expected. This is an important topic to bring to the open.

What does the majority really want from the Government?

Think about what the majority really expected of the government they helped bring to power.

Before answering these questions, let’s see what the minorities sought. Whenever the minorities have been kingmakers as a result of the “dis”proportionate representation system, a handful of minority leaders have walked away with the cake securing plum portfolios and manipulating those positions for their own and subtly changing legislations to suit their own. Not many minorities objected to this unfair display of systematic abuse of powers primarily because they were hypnotized into the belief that ‘these were being done for the good of the minorities’.

But look at the minority political parties and their political manifestos. This is evidence of their mentality. Majority of the political parties formed by the minorities are for their own and having nothing country-specific in their aims & objectives. This is divisive politics taken to election platforms & unhealthy for any democracy.

When Mahinda Rajapakse lost in 2015, he left a humiliated man. He was laughed at and scorned but it was not any of the ones who surround him today that pawned their jewelry to travel miles to show the world that the people backed him. It was the ordinary people and a handful of nationalists that braved the insults and kept the momentum going and built the environment for the return of the Rajapakses. That return would not have been ever possible had it not been for these humble people and that return would not have ever happened had it been left to those that are now in their inner circles returning after deserting them. These are all lessons in life and should come as no surprise as Buddha has clearly described the behavioral patterns of people and showed us how to accept the truth – come what may.

What do the Buddhist majority of Sri Lanka seek from its leaders & is this an obstacle to good relations with the minorities?

Sinhala Buddhists have always sought the rectification of historical injustices to them which included the return of their language right. In so seeking this reverse discrimination, their request had nothing to do with requesting the repression of another language.

Minorities have no reason to regard this an affront to them.

Minorities have no reason to question this or regard this as an affront or discrimination to them. The foremost place given to Buddhism is no impediment to any minorities practicing their religions.

The majority appeals to the political leaders to ensure external, fundamental factors that seek to change demography, create religious-ethno ghettos, that spreads cults and extremisms do not hamper the country’s progress and the people’s peace.

These appeals are nothing the minorities can find fault with.

The majority repeatedly refers to the ancient rule of dasa raja dhamma where an inclusive society existed wherein man and animal lived in harmony with environment also accepted as stakeholders in living under guiding principle of Ahimsa, protection of heritage sites, historical & archaeological sites. The majority have raised issue over the need for a moratorium on construction of new religious places of worship via foreign funding, falsely claiming joint-right to historical sites that are Buddhist, laws to prevent commercialized conversion, regulations on land ownership to prevent Sri Lanka’s limited land being taken over, laws on immigrants & refugees to stop demographic change and future challenges, laws to prevent ethnic based political parties which have posed communal and religious tensions amongst all, laws that prevent polygamy, child marriage as laws must apply to all equally with no preference to one community for banking, food and marriage. While giving place to Buddhism and the Sinhala Buddhist heritage of Sri Lanka has no impediment to others practicing their faith, allowing one community special rights in marriage, court, banking and food does.

These are nothing that minorities can fault the majority over.

The majority has repeatedly requested the leaders to give compulsory prominence to National History in the education system in schools and even in public service.

This too is nothing that the minorities can claim is an affront to them.

Anyone reading the demands of the majority will realize that these demands is with foresight to ensure the country is held together for each time the country was facing threats it was always the majority that came forward to defend the nation and sacrificed their lives to do so. The handful of minorities that joined them did so because they saw the true objectives of the majority and they too wanted to join in that national quest.

Why is that the majority are always given second place?