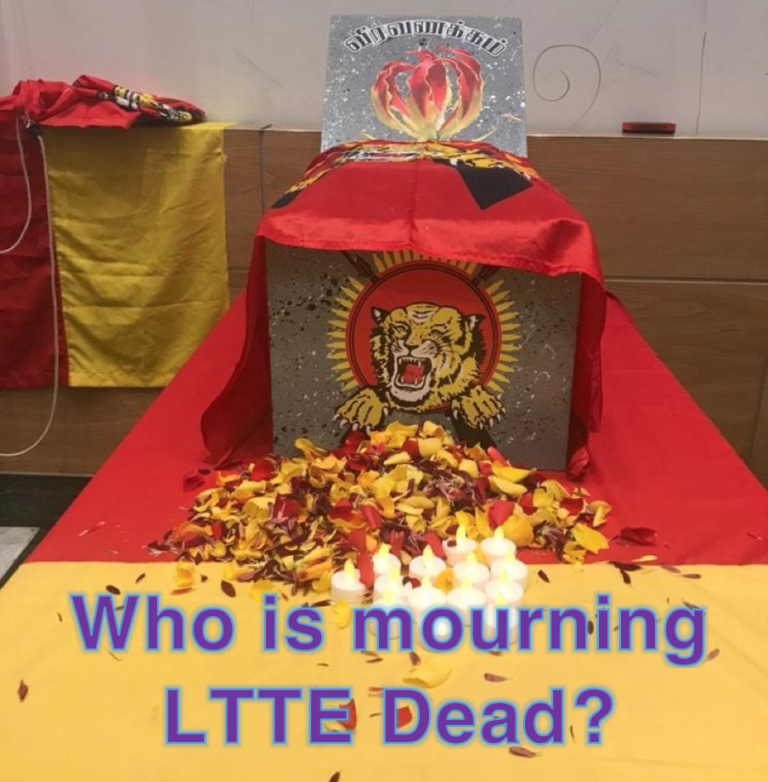 An organization by the acronym PEARL located in Washington DC, USA has written to Singapore’s Attorney General’s department to investigate the former President Gotabaya Rajapakse. On what grounds can lobbyists insist on investigating a non-Singaporean going to the extent of prosecuting him for “alleged” crimes committed outside of Singapore, simply because they have created a well-funded propaganda sans any evidence? This propaganda has turned into a money-making venture on the guise of accountability. World leaders must now demand they present facts only. 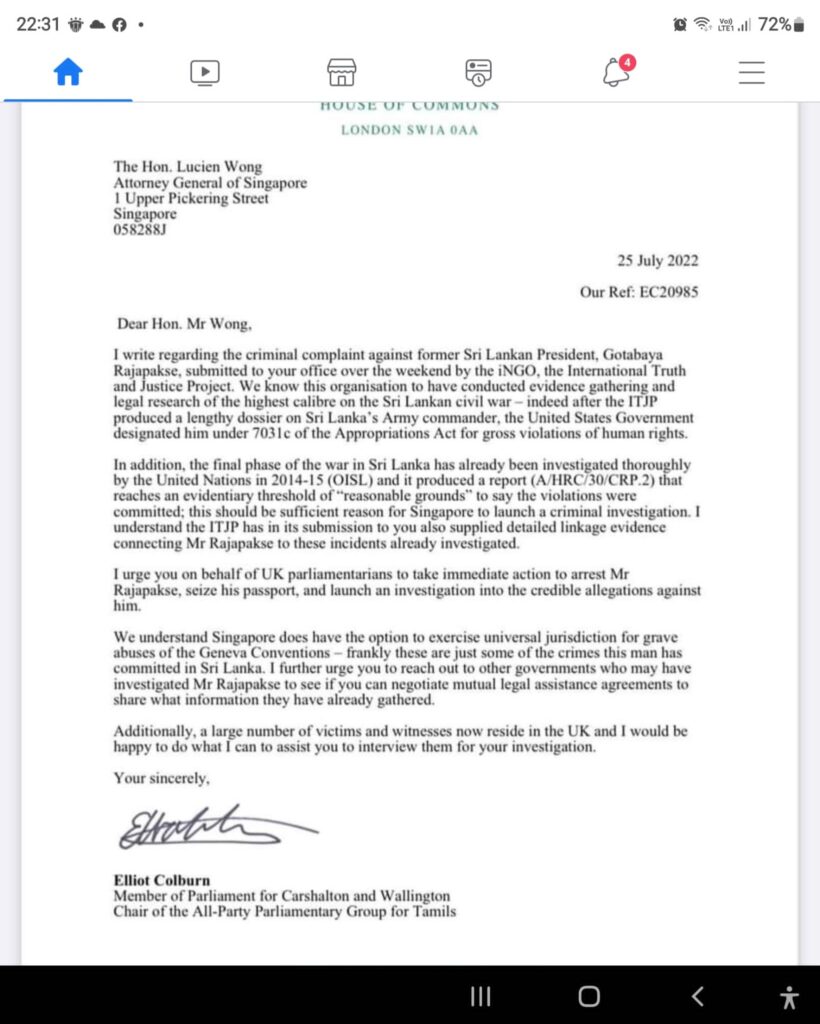 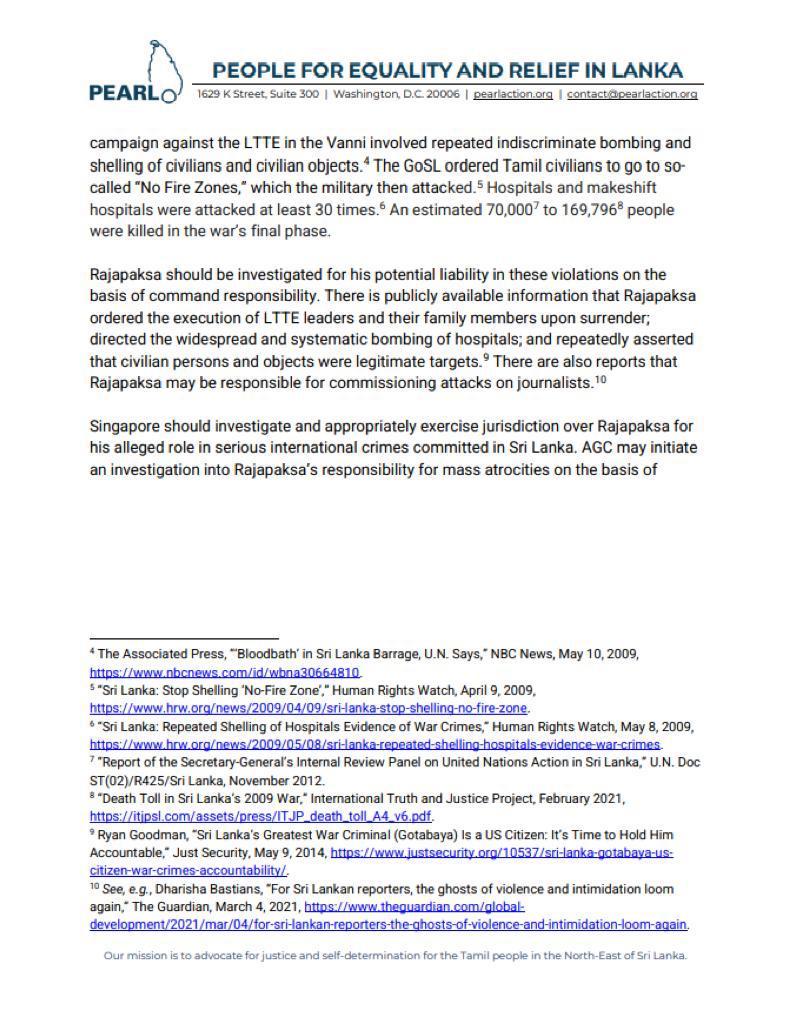 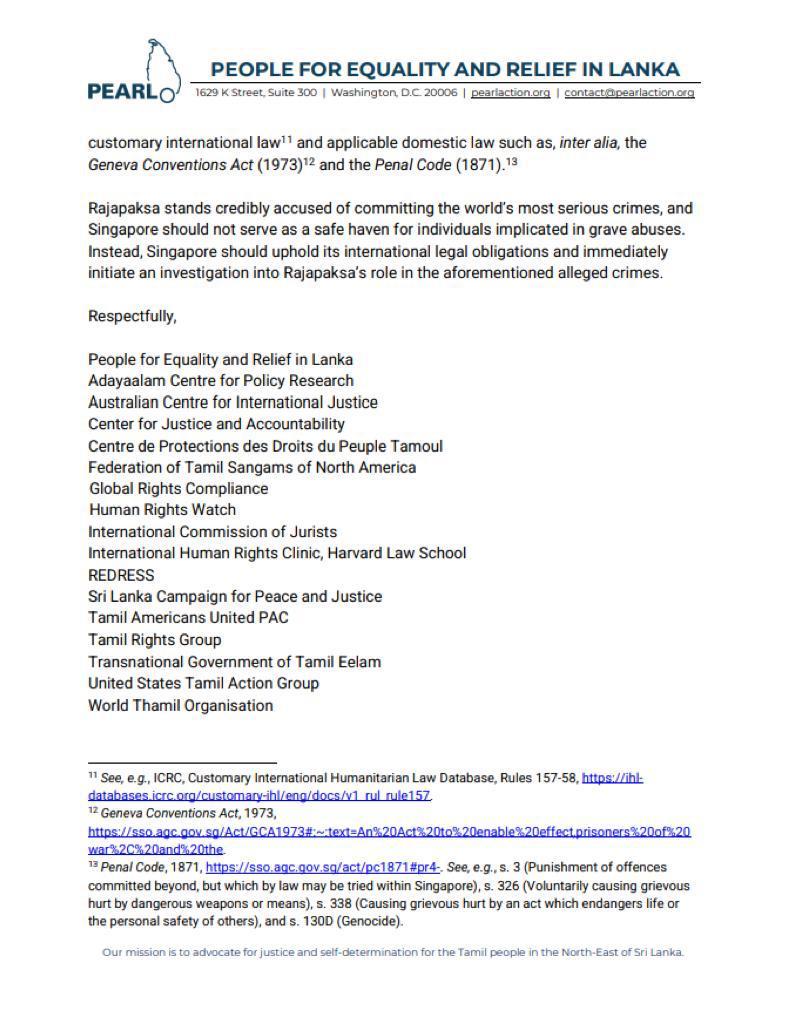 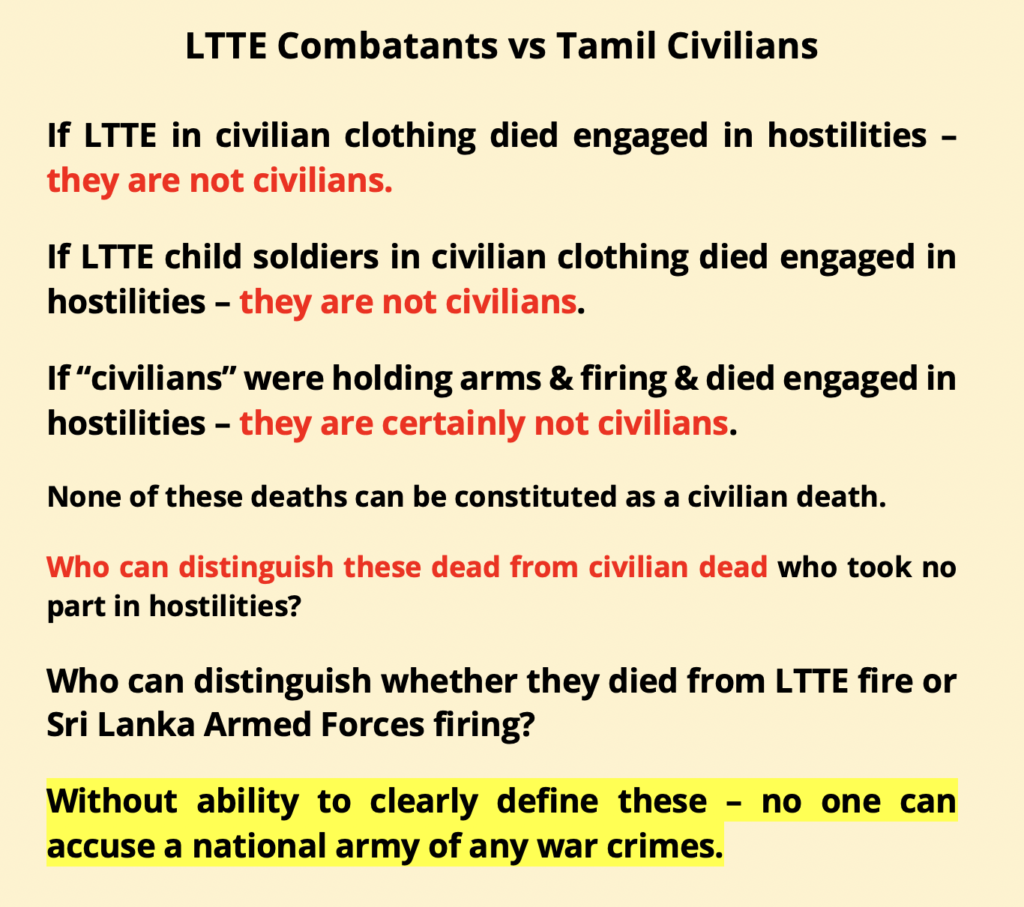 If civilians directly participated in hostilities, they become lawful targets & cannot be taken into account in assessing proportionality. 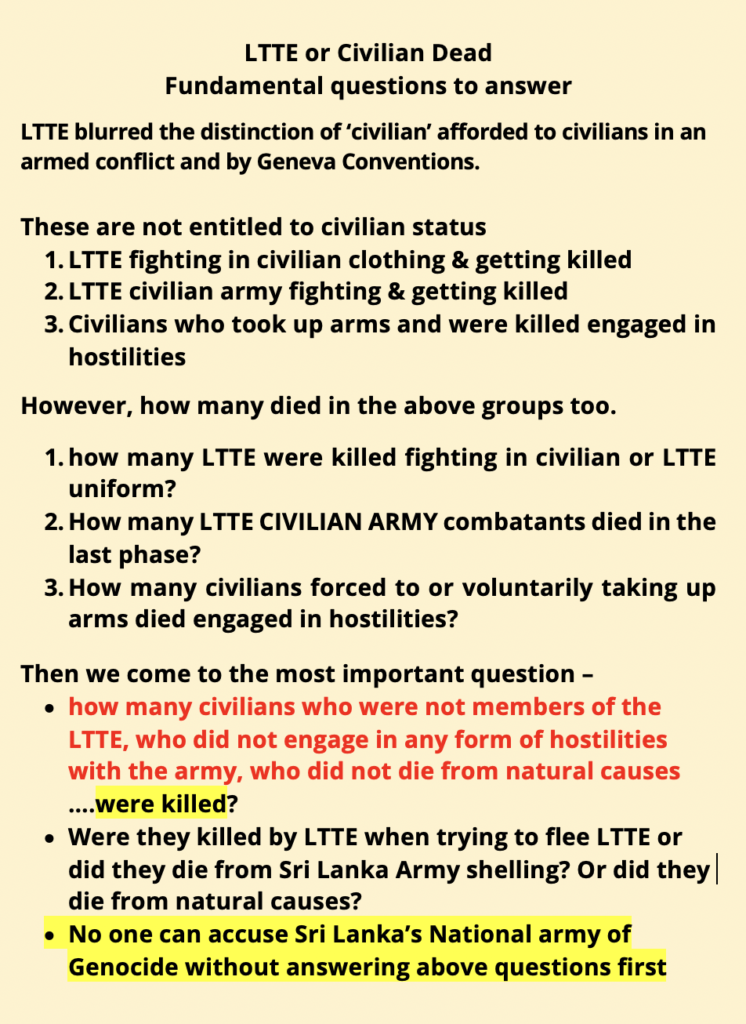 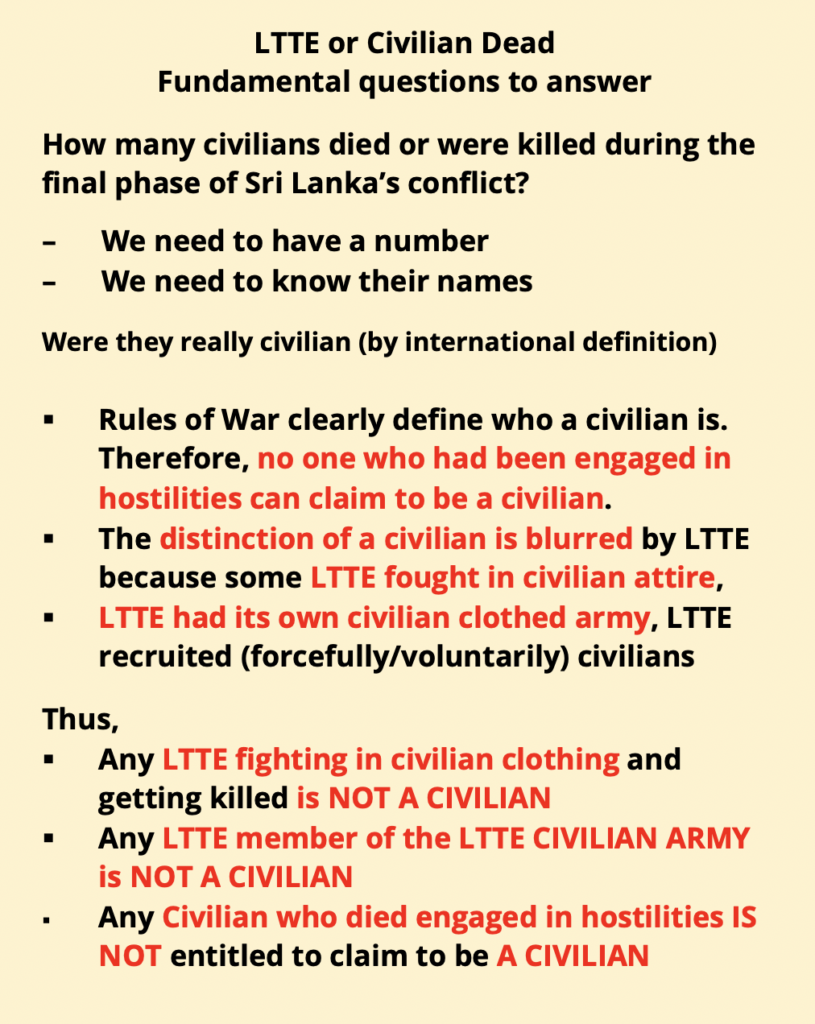 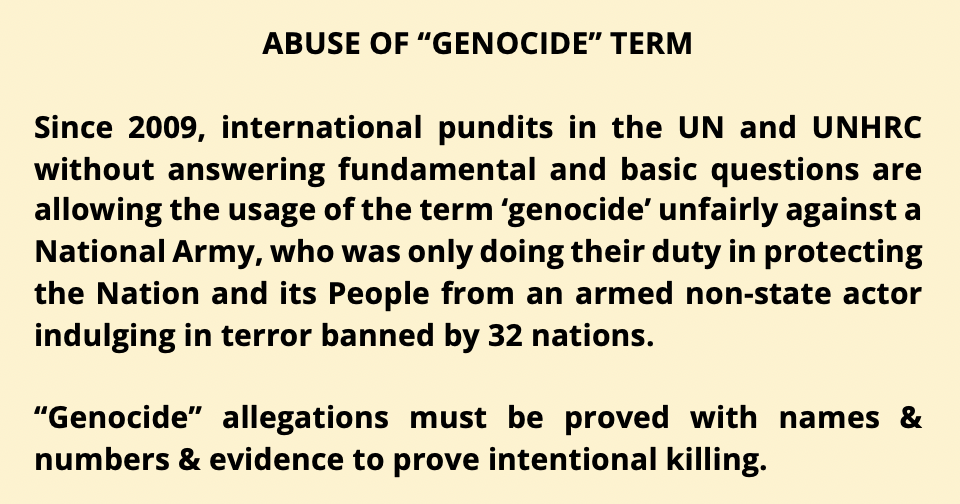 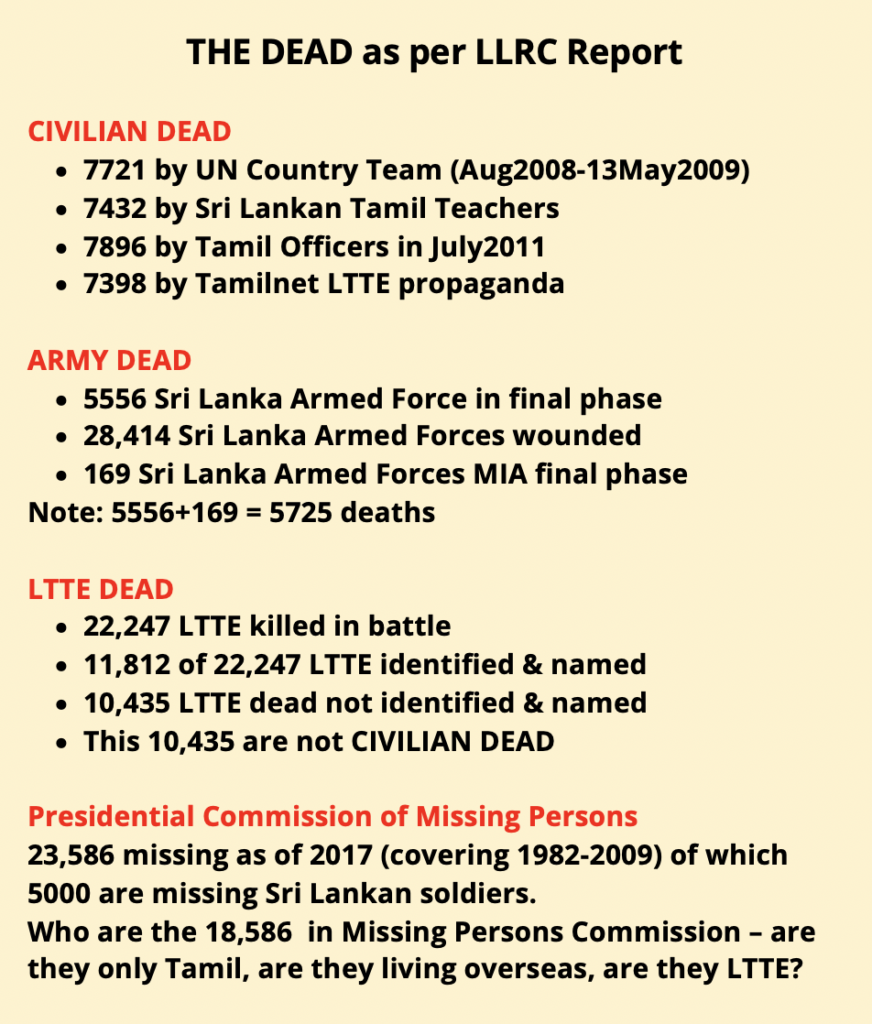 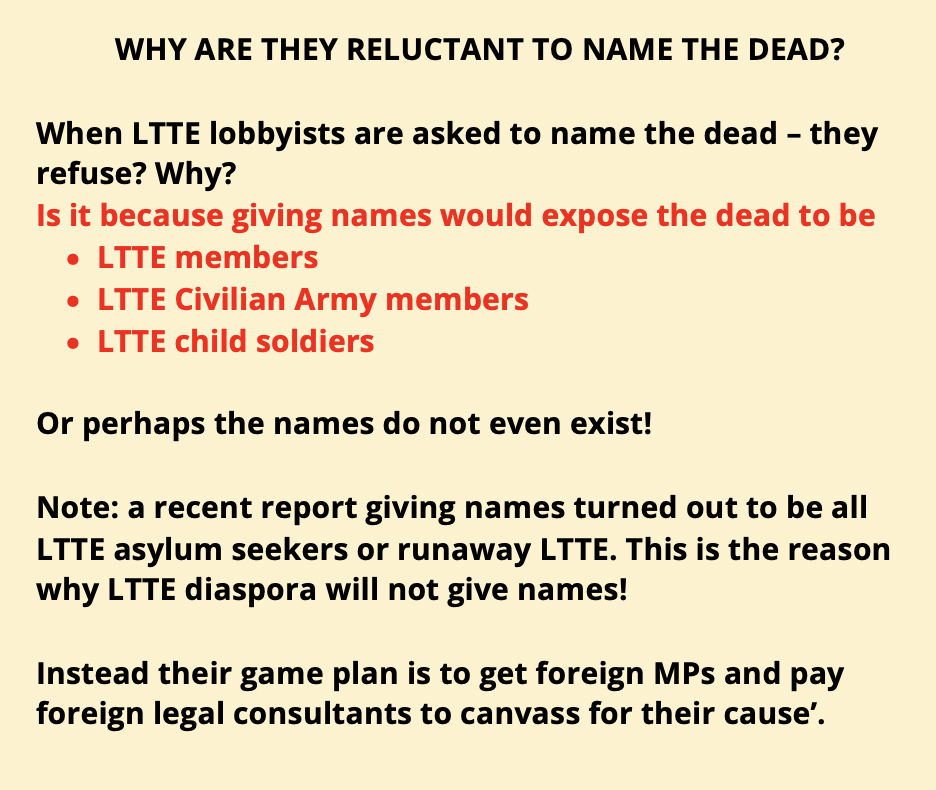 Does Leelathevi Ananthanatarajah, the Secretary of the Association for the Relatives of the Enforced Disappearances in the North & East have names and numbers of the disappeared? If so produce them to the Missing Persons Commission. 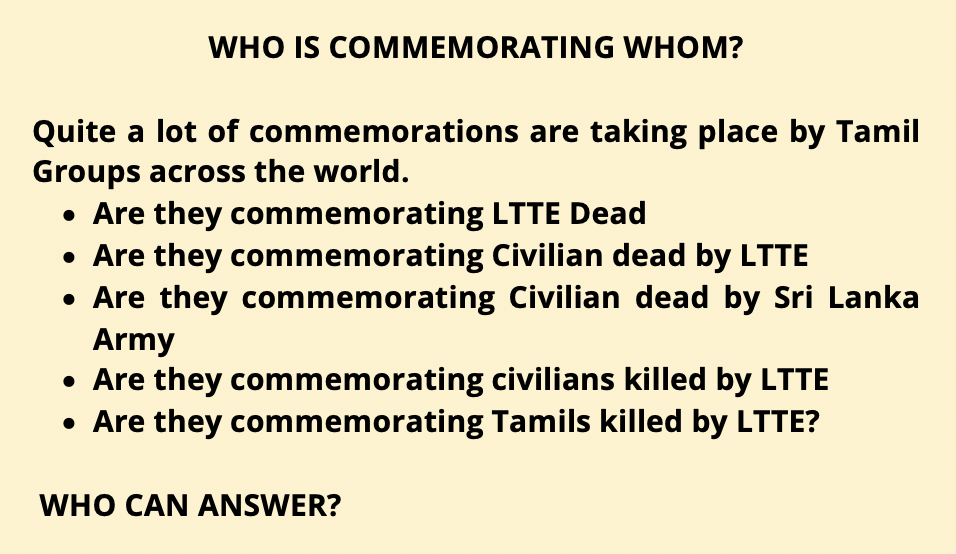 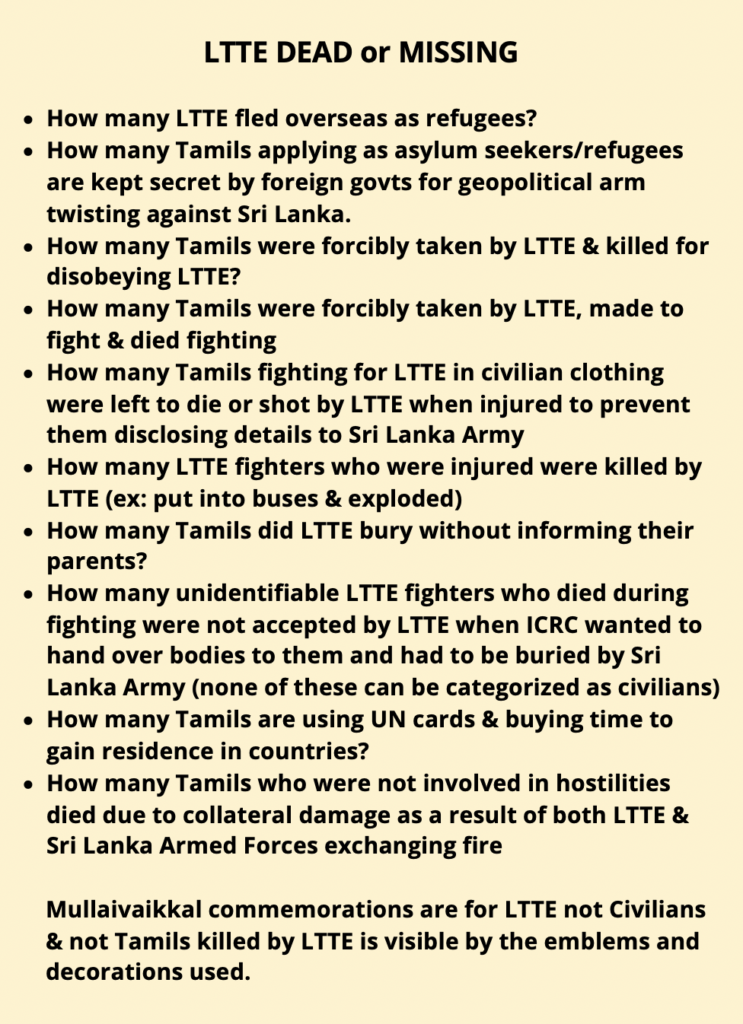 WHO ARE THE MISSING

Its now 13 years since defeat of LTTE – So far we have not found a single SKELETON to even come close to believing the 40,000 dead figure.

If there is no dead body to claim them missing – where could they be? They could have fled to a foreign country. They could have changed identity and pretending to be someone else to disassociate themselves from their past. There could be many other reasons.

While anyone can be declared dead if they have not appeared for a specific number of years – no one has any right to declare a person or persons guilty of killing the missing person based on circumstantial and hearsay evidence. It must be proven beyond a shadow of a doubt.

LTTE & the Sri Lanka engaged in battle and exchanged fire.

Neither side exchanged roses.

LTTE were given 2 chances to lay down arms & surrender but refused.

While engaging in battle, Sri Lanka Armed Forces rescued close to 300,000 Tamils (some LTTE were among them)

No conflict ends without deaths – there have been deaths on both sides.

The ICRC is on record to say the army could have finished the conflict sooner if they did not compromise their own soldiers to save the Tamil civilians kept forcibly by LTTE.

Both the GoSL and UN Country Team estimates of less than 8000 deaths which includes LTTE dead is provable against the vague and sensational figures presented without evidence.  We can be happy there has been no deaths related to LTTE terror since 2009.

Police – have police received complaints since 2009 re LTTE/Civilian missing

OISL – what are the complaints filed and findings of OISL

Paranagama Commission – what are the complaints filed – 18,590 complaints only

GoSL/Foreign Ministry requests from foreign governments to confirm if names & details match with those seeking asylum or refugee status.

Singapore or any foreign government should desist from creating precedence based on powerfully funded lobbies aimed at revenging governments for defeating an internationally proscribed terrorist movement simply because it impacts their livelihoods and to enjoy prescriptive benefits in foreign climes on the guise of promoting accountability.

Singapore and all foreign governments should follow the rules of international humanitarian laws applicable to a non-international armed conflict that took place in Sri Lanka between LTTE non-state actor and Sri Lanka’s National Army.