Can the Swiss Embassy Colombo keep a local recruit inside the embassy compound by force? 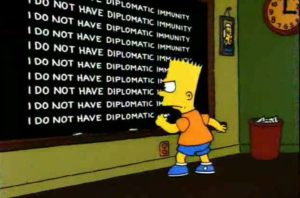 We sure hope the Swiss will not be caught doing a Rajitha on Sri Lanka’s new Govt?

Doing a Rajitha is what we now call the fake white van story using a dressed up driver. Humour aside, the Swiss claims an injustice has happened to its local staffer, who is a Sri Lankan citizen so we are all naturally concerned because she is a Sri Lankan citizen. We are no investigators but we don’t like the negative and biased publicity against Sri Lanka by very unfair remarks made by Swiss authorities and their silence in correcting distortions spread via international media. This is why we are asking questions that the international readers should also be thinking about without accepting the lies spread regarding this supposed ‘temporary kidnapping’ & questioning. Up till 30thNovember, the Swiss did not say anything about her being ‘ill’ (5 days after the temporary kidnapping) but we predicted this would be the likely excuse the Swiss embassy would give. We also predicted the likely scenario of transporting her & family to Switzerland and now 1st December the Swiss makes request to ‘air ambulance’ her! So case gets closed with international tarnishing campaign done against Sri Lanka. Sorry, but Sri Lanka is not ready to be humiliated until we come to the bottom of this. Whoever has done this – we want to know who it is and we don’t care who it is – we just want to know who!

This woman is a local recruit. She therefore, has no diplomatic immunity. She cannot be kept by force inside an embassy compound. Keeping her inside the embassy compound since 25th November 2019 is a fundamental rights violation. What about her family? Are they inside too? If not, this family has every right to see their daughter, mother, wife!

Why was she not allowed to leave the embassy compound since 25th November? The embassy could have requested police escort to her home which the Foreign Ministry would have obliged.

Why did the world get to know this ‘temporary kidnapping’ only via a web portal?

Why did the Swiss Foreign Ministry make a statement only on 27th November?

Why is the Swiss authorities denying Sri Lankan police to question her?

The Swiss officials can be present at questioning – they can even hire a lawyer for her!

If the abductors knew her identity enough to abduct her, only we the innocent public don’t know who she is, so what’s the problem? If the CID abducted her then they would know her identity, but given that the police don’t know who she is, that leaves out any CID abducting her! The Sri Lanka Foreign Ministry may have a list of staff and probably that will include her name.

How did a local recruit get to handle such important subjects as handling files of people discretely being helped out of Sri Lanka by a foreign embassy in exchange for sensitive information!

The truth of this will come out only during next Geneva sessions. So we await to see what the West will use against Sri Lanka using information handed by Nishantha Silva in exchange for asylum!

If the woman is ill after being asked to give a statement it is only right that Sri Lankan medical attention is given to her immediately. Has the Swiss embassy given her medical attention? If not why? Shouldn’t the police seek magistrate intervention for both questioning and examination of this Sri Lankan citizen by a Sri Lankan doctor?

Swiss Embassy Colombo, don’t get us wrong, but as members of the general public, we want to certainly find out who did this and our questions are only based on what your embassy, your western media and others are publicly stating. We are only breaking down what is in public domain and asking questions.

If she was put into a car, blindfolded, where was the car heading, whereabouts Gregory’s Rd did this kidnapping take place – this is where some 100 US Marines are also residing. Was she walking from her car to the Embassy or was she coming by bus and walking down the road when the car came to abduct her? Did she scream, refuse to get in or was she dragged inside the car and how many did she see inside before she was blindfolded, if at all that too took place. Why did no one see all of this drama happening? What time did it happen?

Where did the car drop her off – before the embassy, after the embassy or on another street? Did they take her belongings, did they steal her money or did they take her phone? Or was it just a nice tete-a-tete. We are dying to hear what she was asked.

The Island newspaper now reports of the Swiss requesting an ‘air ambulance’ which in other words imply to be flown to Switzerland where she will join Nishantha Silva & family, a naval officer and probably scores more of others who have fled Sri Lanka for refuge in Switzerland the supposed to be ‘NEUTRAL’ country!

The Island newspaper also says Sources said that Norwegians were among those who secretly moved out Sri Lankans, including LTTE cadres over the years. Sources recalled how Rajapaksa administration sought an explanation from former Norwegian Ambassador in Colombo Hilde Haraldstad regarding clandestine moving of Sri Lankans via the BIA”

So the Swiss wants to end this drama by simply claiming she is sick and flying her off to Switzerland. Move over Hollywood!

So she isn’t in a condition to answer a few questions but she is well enough to fly to Switzerland the fastest of flight times is 14hours, longest being 32 hours!

The Sri Lanka Foreign Ministry must understand the bigger picture here – it’s not just immigration formalities. This incident cannot be allowed to be swept under the carpet by simply allowing this local recruit to leave the country along with her family after making accusations which have now spread across the world.

The local staffer had dropped her child to a school nearby and was walking to the embassy when a WHITE TOYOTA COROLLA (NOT WHITE VAN) had bundled her into the vehicle and driven away. New York Times please make correction!

However, this is what the Swiss Foreign Ministry spokesman said on 27th November 2019 ‘local employee of the embassy was detained against her will on the street and threatened at length by unidentified men in order to force her to disclose embassy-related information’.

Interestingly from what the snippets leaked to the Sunday Times is that in between the 2hours she was ‘temporarily abducted’ she was blind folded & bound (which can be tested), questioned on why she helped her embassy give visa to CID CI Nishantha de Silva, threatened if answers were not given and sexually molested too (this too can be medically tested)

However, the Swiss Foreign Ministry made NO MENTION of any Nishantha Silva in their official statement and Nishantha Silva & family had already fled Sri Lanka on Sunday 24th Nov)

Quite a lot of fiction seems to be getting in the way of facts. It is no secret that ‘bogus witness’ and third party accounts were the basis of every UNHRC resolution/report against Sri Lanka in such a scenario while ‘unknown sources’ ‘questioning NGOs’ ‘white vans’ ‘intimidations of NGOs’ going to get visa are going to be used as a blanket to protect the lies spread against a democratically elected government, we general public have every right to ask questions and expect answers.

Swiss Embassy Colombo, this local staffer is only your employee, hope you are paying her EPF/ETF, she is a citizen of Sri Lanka and we are concerned that she is being kept inside an embassy compound and if her family is not inside the compound it means she is denied access to them by the Swiss authorities. Perhaps not seeing her family since 25th November is more traumatic for her!

Swiss Embassy should know when a crime has taken place, in whatever part of the world, it is the police who are tasked to take a statement and then start an inquiry and conclude the investigation. This is an universal procedure. Enough and more sensitive cases have had to face questioning. You will remember how the Indian diplomat Devyani Khobragade, was arrested & questioned by US State Dept and she was both a diplomat & India’s Deputy Consul General.

So, why is the Swiss Embassy making such a fuss over a questioning which is an universal procedure? Why don’t they hire the best Sri Lankan lawyer to represent her!

We sure hope all this doesn’t end up a case of someone’s fertile imagination backfiring!