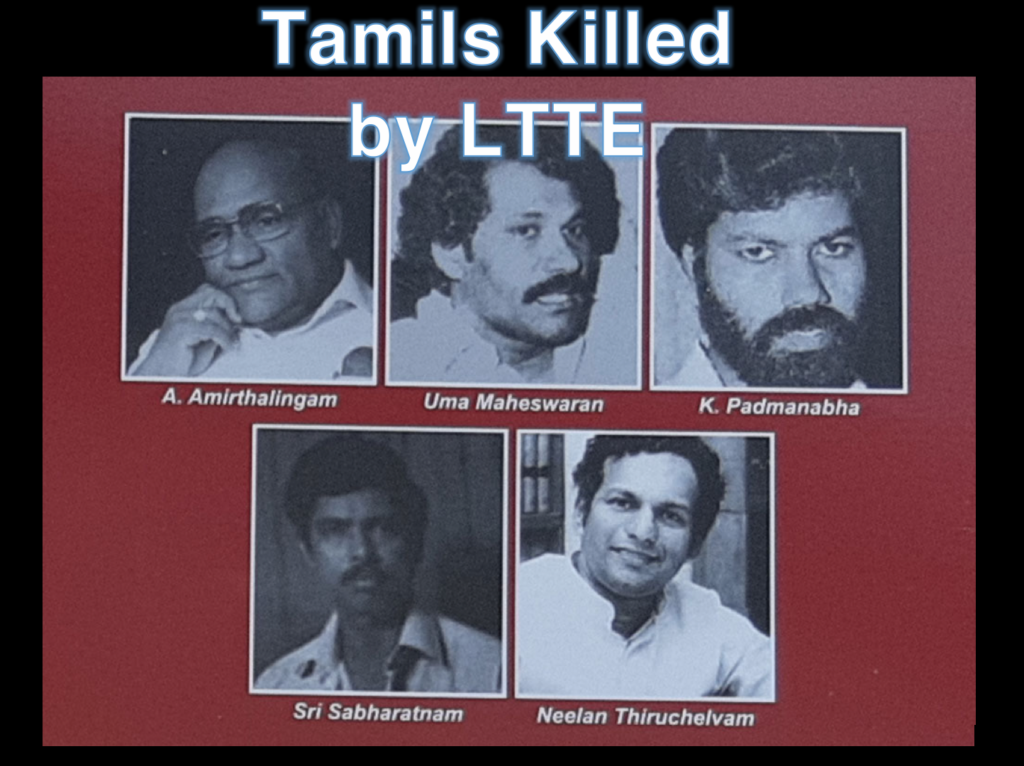 What is Maaveerar Naal? Who originated it, when & why are fundamental questions anyone commenting on the subject should know to answer. Maaveerar Naal translated means ‘Great Heroes Day’ but it is not a Tamil civilian, Hindu or traditional event. Commenced first on 27 November 1989 by LTTE, it is a LTTE event to commemorate LTTE dead. Not Tamil dead but LTTE dead. It essentially means that Maaveerar Naal omits non-LTTE dead. Maaveerar Naal is certainly not commemorating Alfred Duraiappah (Mayor Jaffna), A. Amirthalingam, Sarojini Yogeswaran (Mayor Jaffna), Neelan Thiruchelvan, Sam Thambimuttu or even Lakshman Kadiragamar. Maaveerar Naal is a commemoration ONLY for LTTE dead – it is not for Tamil civilians & certainly not for Tamils (politicians, academics, public servants, clergy, children) killed by LTTE.

More importantly the Great Heroes imply only LTTE & does not include any of the dead from other Tamil militant groups – PLOTE, EPRLF, these families were forbidden from mourning the loss of their loved one’s publicly.

Maaveerar Naal is NOT commemorating these dead Tamils

A. AMIRTHALINGAM – MP, Secretary General of the TULF/ a Former Opposition Leader killed by LTTE in 1989

K. PATHMANABHA – EPRLF leader killed by LTTE in India in 1990

Here’s a list of prominent Tamils LTTE has killed …. http://www.internationallawbureau.com/wp-content/uploads/2015/07/Law-Paper-Attachment-2-List-of-Tamil-Politicians-Assassinated-by-the-LTTE.pdf

Wigneswaran, TNA or Diaspora or even the Western leaders & NGOs commenting on allowing the commemoration of this event are speaking of mourning for the Tamils, that LTTE has killed. The commemorations are ONLY for LTTE dead & no one else so who is Wigneswaran & TNA really fooling?

The LTTE Great Heroes Week to honor dead LTTE commences on 21November & ends on 27 November while Prabakaran’s birthday falls on 26th November. It was during one such event that Prabakaran announced that if he betrays the Tamil Eelam cause he should be killed. The annual event turned into a type of cult martyrdom. Another noteworthy aspect is that Hindus do not bury their dead. Committing suicide is considered a crime – burial is more of an Abrahamic faith & martyrdom was also part of brainwashing LTTE to think they were going to heaven for the cause of Eelam.

Yes, there is mass participation with civilian members – but these are family members of dead LTTE. They are known as Maaveerar Kudumbangal”(Great hero families).

What it means is that Maaveerar Naal is for dead LTTE by LTTE families. All LTTE families take part in these events in Sri Lanka & overseas… so everyone attending the events are linked to LTTE. During LTTE heyday only these families were given preferential treatment. Non-LTTE Tamil civilians or non-LTTE other Tamil Groups or their families did not get any preferential treatment.

Non-LTTE Tamils civilians do not attend & these public mourning’s are not for non-LTTE dead – neither Tamil civilians nor Tamil militants from other armed groups.

None of the family members of the dead in other Tamil militant groups attended or were even invited. In fact families of these dead were not even allowed to mourn their loss publicly. Their families are not known as Maaveerar Kudumbangal”(Great hero families)

Part of the Maaveerar Naal commemorations are the “Maaveerar Thuyilum Illangal” LTTE cemeteries. Each dead LTTEr had a tomb allocated though the actual body was not buried inside.

Maaveerar Naal ceremonies were in red & yellow the colours of the LTTE, LTTE flag is hoisted, Eelam map is prominently displayed, a garland is placed first for Shankar the 1st great LTTE hero.

As D B S Jeyraj says Maaveerar Naal is an event ‘of the Tigers, for the Tigers & by the Tigers’ – It is not a day or week of mourning for all Tamils killed but ONLY for LTTE dead & ONLY LTTE dead.

Therefore, while Maaveerar Naal is only for commemorating LTTE by LTTE supporting Tamils, the hype of ‘war widows’ are also relevant to only spouses of LTTE dead & is a term that should be immediately disallowed from use. LTTE being a non-state actor are legally not entitled to the use of the terms political prisoners nor POWs & the term war widows specifically applies to only wives of soldiers of a national army & not armed terrorists.

It is time these abused phrases & terms are corrected locally & internationally as even international experts, media & UN are using these terms inspite of knowing their connotations & inapplicability to the LTTE.

If LTTE commemorated only their dead even going so far as to disallow families of other Tamil militant groups to mourn their dead publicly, we demand to know why Wigneswaran & TNA should be allowed to mourn LTTE dead only & it is now long overdue to take action against the University of Jaffna, its academic staff & students who are commemorating these dead LTTE unabashedly with LTTE flags, emblems, garlanding portraits of dead LTTE but completely ignoring the other Tamils killed by LTTE or even other Tamil militant dead.