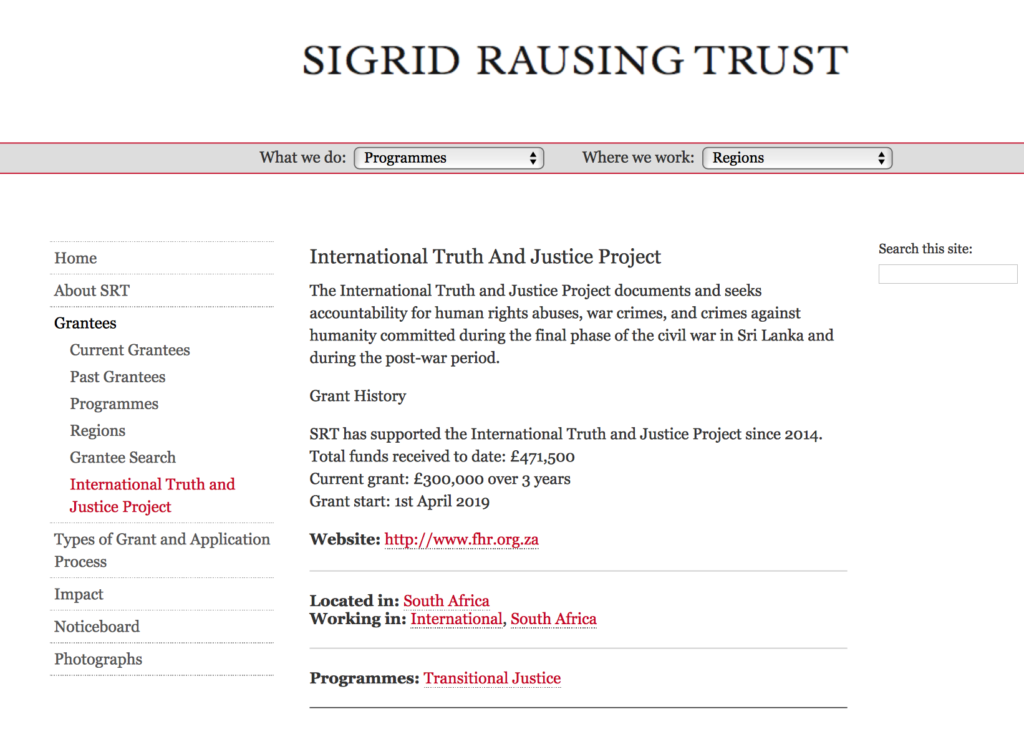 This open letter to the Board of Trustees of Sigrid Rausing Trust is based on the SRT website & to seek clarifications regarding funding in particular as a large sum of funding is going to an entity that is on a smear campaign against Sri Lanka.

Your Trust, as per your websitecovers the Balkans, Central & Eastern Europe, former Soviet Union, Lebanon & Turkey, Egypt, Morocco, Tunisia in North Africa, Kenya, Zimbabwe and South Africa. How is it that you are also funding ITJP Sri Lanka?

Is your Trust aware that Sri Lanka is not located in Eastern Europe or Africa but in Asia?

It is under 4thprogram – Transitional Justice that details of funding is given to the International Truth & Justice Project (Sri Lanka) which is administered under the Foundation of Human Rights South Africa which EU launched in 1996. Yasmin Sooka has been EU employee of FHR South Africa from 1996 to September 2019. Whether she continues to be Director of ITJP (Sri Lanka) functioning within FHR (South Africa) we do not know.

However, as per Sigrid Rausing Trust website your Trust has been paying ITJP (Sri Lanka) since its inception in 2014

She has so far written over 70 reports against Sri Lanka from ITJP. But her association with LTTE fronts cannot be overlooked. She attended the conference of such a front as its Guest Speaker to be introduced as ‘comrade’. She has been associated with other entities linked to efforts to smear Sri Lanka as well. While she was a member of the personally commissioned Ban Ki Moon Panel which in its report said they had ‘credible allegations’ months later in an article co-authored by the same 3 member panel – they replace ‘credible allegations’ with ‘credible evidence’. http://www.nytimes.com/2012/03/03/opinion/revisiting-sri-lankas-bloody-war.html?_r=0

Your Trust as per your website your Trust claims to ‘not accept unsolicited applications for funding’. As such, we would like to know how much of Sri Lanka’s conflict Your Trust is actually aware of. Your NewsStories from 2013 to 2020 has not covered a single story on Sri Lanka.

This is to educate your Trust on what Sri Lanka suffered and who the real enemy should be.

Sri Lanka is an island in the Indian Ocean with a population of just over 20million of which 70% comprise the Sinhalese and the remaining 30% minorities that comprise Tamils & Muslims. Sri Lanka was occupied by 3 foreign invaders from 1505 to 1948 (Portuguese – Dutch – British). Their divide & rule policies created most of the existing problems as a result of marginalizing the majority and providing preferential treatment to the minorities. The divisions created were inflamed covertly post-independence.

In 1970s groups of minority Tamil youth obtained armed training & returned to Sri Lanka. The main reason for them to take up arms was against their own rigid caste system which resulted in assassinating Tamil leaders initially. In order to reign over their own, these low caste Tamil youth, chased away the Sinhalese & Muslims who were living in North Sri Lanka. Not many questioned LTTE about ethnic cleansing of the 2 communities by LTTE from North Sri Lanka to claim it a mono-ethnic area.

These armed militants went on to vanquish other militant groups to reign supreme. They became internationally known as Liberation Tigers of Tamil Eelam headed by Velupillai Prabakaran. LTTE went on to commit the assassination of former Indian Prime Minister Rajiv Gandhi in his own country in 1991. LTTE has killed scores of Tamils though claiming to represent Tamils. LTTE has killed Sri Lankan politicians, public officials, academics, religious clergy, children, villagers, unarmed civilians virtually across 30 years via suicide missions, bombs and assassinations. LTTE was eventually vanquished in May 2009 after LTTE closed the sluice gates that supplied water to 40,000 farmers in the East. This was a war crime to deny water.

LTTE continues to be banned by US-UK-India and 32 countries around the globe even 10 years after its ground force was militarily eliminated.

When LTTE closed the sluice gates denying water, they were asked to re-open the gates. They refused and went on to attack adjoining villages killing innocent people. A Government is bound to safeguard the lives of the People and it was after 30 years of weathering terror, taking part in numerous peace talks, negotiations, ceasefires some which were mediated by foreign parties and even presence of foreign peace keepers and foreign monitoring missions failed to bring peace that the GoSL ordered to militarily defeat LTTE. The country had suffered 30 years of LTTE terror and unlike 9/11 which was one incident that ended up in bombing Afghanistan and Iraq where foreign troops continue to be present even after 20 years, Sri Lanka has not seen LTTE bombings or suicide missions since May 2009. So 20million people are happy that LTTE is no more because it is we who know what we suffered not anyone else.

Entities that chose not to do anything more than issue statements when LTTE murdered suddenly began to call for war crimes investigation when LTTE was defeated. We find this very strange. LTTE recruited children and turned them into child soldiers. There was no Trust to fund an end to children being trained to kill. The Australian nurse who trained these children to kill also trained them to commit suicide and she lives in UK – her name is Adele B.

As for war crimes – why is everyone silent on the 49 injured LTTE who LTTE leaders put into a bus and bombed in May 2009 lest they should spill the beans on LTTE? When UN Secretary General & UNSC as well as members of the international community also appealed to LTTE not to shoot the fleeing Tamils – who are asking how many fleeing Tamil civilians LTTE shot & killed. When LTTE forced Tamil civilians to accompany them as they retreated – who is asking why LTTE did not release the civilians and not put them in harm’s way by firing from among civilians and keeping military hardware among civilians? Isn’t this a violation under rules of war?

The numbers being quoted as dead contradicts the figures that can be proved with names. It’s really time these lies ended.

When LTTE was given 3 chances by the Government to give up, surrender and lay down arms and when LTTE refused and declared it would continue the battle – they chose their destiny. Of course, there is collateral damage. But no one should forget that the Sri Lankan Armed Forces physically saved some 300,000 Tamils and brought them to safety. Each of these have a name but the Sri Lankan Armed Forces are being accused of killing a number which is unsubstantiated. So many people are quoting civilian dead but none of them have provided names or details of the supposed to be dead. What needs to be clearly mentioned here is that anyone quoting dead figures or names cannot plug the names of LTTE combatants because they cannot be featured as civilian dead.

The Trust must also note that LTTE fought in uniform, in civilian clothing and LTTE had its own CIVILIAN ARMED FORCE. Any civilian fighting in this unit cannot be categorized as civilian dead either. There are a lot of complications. Obviously, your Trust has been misinformed to tap into your generous funding.

As a citizen of Sri Lanka, we are doing our best to educate the international community because they have been victims of lies and false propaganda. No member of the international community can point fingers because they failed to give us peace from LTTE terror. Our Armed Forces did. Your Board should find out how we lived in fear from 1980s to 2009. We couldn’t attend school or work. Our parent’s eyes were filled with tears each time we left the house not knowing if we would return. We can give you lists of acts of terror committed by LTTE every day, every week, every month, every year for 30 years. You cannot understand how happy we were when in May 2009 we realized we did not have to leave our homes in fear.

This organization that your Trust is funding has even presented LTTE terrorist dead as ‘civilians’ and LTTE asylum seekers as civilians too.

Your trust has spent £771,500 on Sri Lanka. Perhaps it is time that you do a proper audit on ITJP (Sri Lanka) as well as do your own homework on Sri Lanka’s conflict by finding out the terror committed by LTTE upon all of the communities, upon Tamil children turned into child soldiers, killing their own combatants who were of no use to them and even killing foreign leaders.

A philanthropic Trust should spend its money on worthwhile efforts and know exactly the nature of what they are spending for.