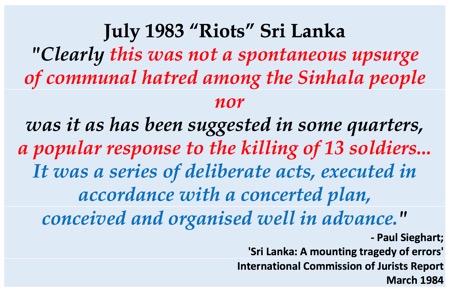 Sri Lanka’s 1983 July “riots” cannot omit to mention the killing of 13 Sri Lankan soldiers that presumably precipitated and justified the attack that came to be termed a ‘racial’ ‘ethnic riot’. No one thought to question how killing of 13 soldiers on 23 July by LTTE terrorists and an attack organized by the ruling government could end up getting classified as a racial/ethnic riot. Fast forward to 2020 – riots are taking place across US precipitated as a result of 4 US policemen killing 1 black American. These riots cannot be termed racial/ethnic either. There are many similarities to be taken from these two incidents while also providing some food for thought particularly the need to exonerate the Sinhalese who have been unfairly accused of attacking the minority Tamils, just as all white Americans should not be attacked for what happened to George Floyd. As can be seen from the riots across the US, many white Americans angered by killing of George Floyd joined the protests, just as many a Sinhalese braved the attackers to safeguard their Tamil neighbors and friends in July 1983. Ironically, July 1983 riots is also known as ‘Black July’. 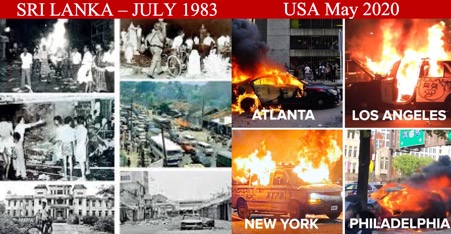 George Floyd was killed by 4 policemen who were using excessive pressure with one policemen’s knee suffocating him to death. All this was screened live. Back in Sri Lanka in 1983 there were no smartphones to record what took and there was no social media to demand justice. George was black and the cops were white. In Sri Lanka, the oft spread narrative was that Sinhalese were attacking Tamils. This was far from the truth but it was politically advantageous for many and Sinhalese became the convenient punching bag for all and sadly continues still.

The US demonstrations that turned into riots that turned into looting, vandalism and anarchy had nothing to do with avenging the death of a black man. The rioters and attackers were not all black. The protestors were also white. How can looting shops, smashing shop windows and car windows or writing graffiti on churches avenge or bring back George Floyd or punish the killers?

Similarly, 13 Sri Lankan soldiers were killed by LTTE. It was true, the soldiers were Sinhalese. 35 Sri Lankan soldiers had been ambushed and killed between 1981 and 1983. It was also true that the government in power decided to use the issue to create an ethnic issue and in so doing incriminated the Sinhalese unfairly. The thugs and governmental backers that attacked Tamil homes did so being brought in buses just like what is taking place in some states in US. President Trump also refers to them as ‘thugs’. The ‘thugs’ in July 1983 Sri Lanka had electoral lists of Tamils. That it was a government-arranged attack is clearly proven by the fact that the rich residential areas where Tamil friends of the government resided were given police/military protection. If this was some spontaneous anti-Tamil attack by Sinhalese, why would only the Government’s Tamil friends be safeguarded and how did they have copies of voter register?

It was the same UNP government that started race attacks in 1978 after coming to power, burnt the Jaffna library in 1981 (attacks on Tamils after LTTE robbed bank & killed 2 policemen) and did not hold democratic elections in 1982.

Just as many a white American felt angered and saddened to watch US police kill a man handcuffed and lying on the floor and joined the demonstrations to protest police aggression, the Sinhalese too boldly came out to safeguard their Tamil friends and neighbors from harm. It may not be savoury to the narrative to bring out these stories of friendship and unity but it is an injustice against the Sinhalese not to do so. For 37 years Sinhalese have been falsely accused of something they never did. Sinhalese did not attack Tamils. Organized thug gangs did.

Would the white Americans like to continuously be held responsible for George Floyd’s murder when none of them took part in it? How fair is the world to judge the white Americans for a crime committed by 4 policemen? Similarly, for what UNP thugs and their leaders in the UNP did, the blame cannot be credited to the Sinhalese just because the story is juicy and more sensational than laying blame upon the then UNP government.

As we see footage of the rioters looting shops, breaking car windows, shop windows, putting graffiti all over churches, setting ablaze police stations, city halls etc — none of these acts are connected to George Floyd’s death neither are they an excuse or justification to loot and cause mayhem. During the 1983 riots many a Tamil home was looted by government patronized thugs who were not only Sinhalese but Muslims and Tamils too. Riots and anarchy provide early Christmas for any looter who doesn’t care what race or religion they belong to so long as they can grab anything valuable to be sold or pawned.

Let’s not forget that with an election looming in the US, the political opposition is all out to destroy the image of the current leader. Much as we may like or dislike him, we cannot overlook the political opportunism that must be taking place. Just like busloads of thugs were transported to attack Tamils by the UNP government, bus-loads of rioters are alleged to be transported in US too. There are some amazing similarities in these two disjointed incidents.

In such a scenario it is impossible to call it an ethnic riot or a riot by Sinhalese against Tamils. Just like the riots taking place across the US cannot be classified as a racial riot. Today, one incident is enough for the mischief vultures to play havoc. This is why most often the false flags and fake stories are being actually funded to cause mayhem by those that have ulterior motives and agendas. It is without a doubt that the July 1983 riots was a well-organized attack but the May2020 unfortunate incident that happened to George Floyd may not have been planned but as a result of government inaction, the mischief makers manipulated and made use of the situation to their advantage. It takes just one stone and a thrower and the rest will be re-written by history. 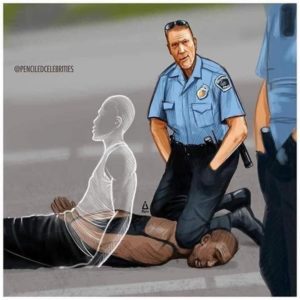 History must record the George Floyd incident as simply a murder by 4 US cops on their own. Linking the incident to the disproportionate arrests and harassment of blacks by US administration is left to the US Govt. But certainly the 4 cops deserve their due punishment.

The International Commission of Jurists in their report claims that though the official death toll was 387 – out of this 50 dead were Sinhalese. Their deaths have never got media attention neither has the fact that the ICJ report also includes that some Tamils had destroyed their homes/businesses to collect insurance to facilitate applying for refugee status and lied their way abroad.

One incident in 1983 is used as a battering ram against Sinhalese but the over 300 attacks by LTTE terrorists against unarmed civilians never get media attention. https://www.sinhalanet.net/history-needs-to-be-corrected-july-1983-unp-attacked-tamils-not-the-sinhalese