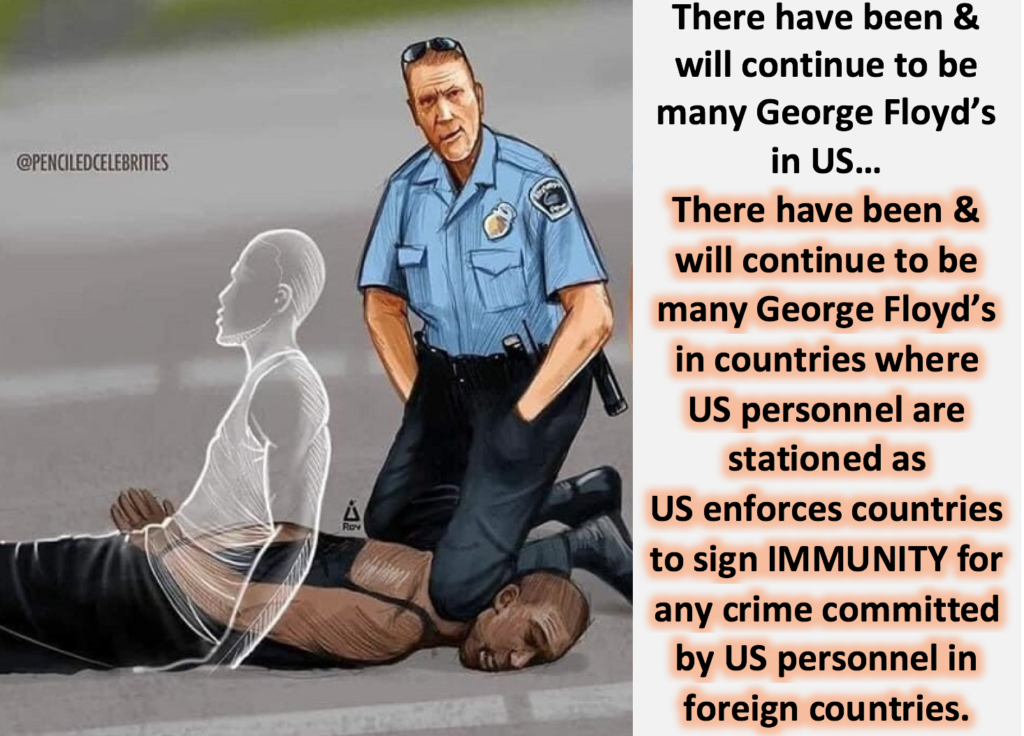 America is in flames. The murder of a black man by 4 US policeman has resulted in mass protests, vandalism, looting across 25 states with the likelihood of the National Guards being called resulting in more deaths. The incident shows that the white-black divide is embedded in the US administration however much they will not admit. The anger of the less than 13% Blacks of America though comprising 42m out of 328million US population, is being heard across the world. Police brutality &system bias are all coming to light. That law enforcement have gotten away and have not been charged is certainly a cause to worry because MCC’s 6.8 clause demands IMMUNITY for any US crime committed in Sri Lanka. Obviously these clauses are being inserted knowing the capability of their people, otherwise why would any agreement go to such lengths to say that no Sri Lankan law or tribunal can charge the US personnel for any crime committed by them. They are putting the safeguards to protect their people contemplating the violence they can commit. We have enough of examples of these crimes committed by US in other countries with impunity and given immunity. For $480m given across 5 years – Sri Lankans have to compromise our lives! No Thank You. No $480m can be more valuable than the lives of our people be they Sinhalese, Tamil, Muslim or Burgher or even another foreign national in Sri Lanka injured to killed by them.

Section 6.8 clearly identifies MCC as a US government CORPORATION.

This means Sri Lankan Government is signing with a US Company.

This clause also states that NEITHER the MCC Company or the US Govt will assume any liability for ANY CLAIMS or LOSSES as a result of ACTIVIITIES or OMISSIONS under the Compact.

That means even if the MCC does not complete any of its commitments, Sri Lanka cannot claim liability.

We presume this is a BILATERAL agreement – if so, shouldn’t the liability option be relevant to Sri Lanka as well? Section 6.4 of MCC says the Compact is an international agreement to be governed by international law. This means Sri Lankan law does not apply. If International law applies – law of reciprocity applies. But, MCC clauses are one-sided and benefitting one country and its company only.

Section 6.8 also says that Sri Lanka WAIVES any CLAIMS AGAINST MCC or the US Govt or ANY CURRENT or FORMER OFFICER or EMPLOYEE of MCC or the US Govt for ANY LOSSES, DAMAGES, INJURY or DEATH arising out of activities or omissions under this Compact.

“The Govt agrees that MCC or the US Govt or any current or former officer or employees of MCC or the US Govt shall be immune from the jurisdiction of all courts and tribunals of Sri Lanka or any claim or loss arising out activities or omissions under this Compac”.

This is the most worrying feature. We do not know how many US troops/civilians/contractors will land in Sri Lanka to handle the Compact.

The murder of George Floyd and the lists of many blacks ill-treated by the US institutional system is a serious worry to all of us and should be a worry given this 6.8 clause.

A US military personnel/civilian/contractor can RAPE, commit life-long injury or even death but the victim will have no justice. The criminal will walk away free of any charge to commit another crime. How can any Sri Lankan Government agree to sign an agreement jeopardizing the lives of its citizens?

We know of what US troops have done in Vietnam, in Iraq, Afghanistan, Libya, Syria, Africa, South America and many many more countries and now we are hearing about how the less than 13% of black Americans are being treated in their own home. We don’t want to import that trouble here to Sri Lanka just for a paltry $480m spread across 5 years.

We appoint a govt by delegating the sovereign powers in the people to protect the people, not to be raped or murdered and told a piece of paper makes it impossible for justice or punishment for criminal acts!

The criminal acts by US troops are no small numbers and relevant to all countries where they are stationed.

Every country US has status of forces agreements, or visiting forces agreement has issues with US troops – people of Okinawa are angered with the Japanese govt for making the Japanese people vulnerable. We know what US troops did in Vietnam. Many a soldier have confessed publicly to US crimes in Iraq and other nations US and allies invaded since 2001.

None of the countries that MCC has Compacts have boasted any major economic development or improvement but their lands have been taken by transnational corporates. https://www.farmlandgrab.org/post/view/12656-turning-african-farmland-over-to-big-business-the-uss-millennium-challenge-corporationthis is a must read to understand what is at stake not only for the people but for a government as well.

The relevance of MCC Section 6.8 clause with the death of George Floyd is that the US system has been institutionally racist and discriminating of blacks. That even the corona’s initial report claimed death by natural causes until the family had to seek ‘independent’ post mortem is something to worry about. The riots and protests would not have taken place had US authorities taken immediate action against the perpetrators of the crime. It took mass outrage and social media to vent anger that resulted in the nation going aflame.

That US includes clauses of immunity is worrying because it could only mean many a George Floyd type victim in Sri Lanka and because of 6.8 clause Sri Lanka cannot take action and it would be pointless protesting or rioting either.

Is putting the lives of Sri Lankans at risk worth $480m across 5 years by giving IMMUNITY and IMPUNITY to US in Sri Lanka?