Credibility of the “War Witnesses”: Which version of Dr. Varatharaja do we believe now?

It is just as well that Dr. Varatharaja has taken to films. He certainly deserves the award for Best Actor. From reading of a script called Hippocratic Oath to serve humanity and practice profession as a doctor with conscience and dignity, he is now reading different scripts and writing memoirs, films and going round the world talking human rights too. He was one of the 5 doctors in the war zone controversially involved in giving one set of information to the Govt that paid him and an opposite version to the foreign media and international organizations based on which he has now found a new source of living.

Dr. Varatharajah and 4 other doctors served in the war zone. Somehow only he has been fortunate enough to ask America’s help and be given visa for entire family to live and work in USA. They left in 2011.

There are 4 characteristics to Dr. Varatharajah

Whoever has written it is venerating LTTE.

Thileepan went on hunger strike and died. LTTE called him “Maaveerar Thileepan” and Varathan as Dr. Varatharajah was known was a Student Union leader who also joined the strike. That he joined a strike that LTTE Thileepan died from is a dead giveaway. He was 15years, this naturally makes any to wonder if he was a child soldier.

Reading the long biography also provides us clues to understand the reason for him making contradictory and conflicting statements.

The case of an email sent to INGOs/Media in January 2009 http://www.asiantribune.com/?q=node/15366but informing his superiors that he had no access to emails yet admitting he gave daily info to the international community highlights his duplicity of character.

https://www.ctvnews.ca/sri-lankan-official-says-army-shelled-hospital-1.366060 /https://www.wsws.org/en/articles/2009/06/sldr-j13.html  establishes why Ramani de Zoysa writing to Lankaweb in 11 April 2009  asks “Is Dr. Varatharajah a LTTE mole”. She questions the 3 confusing statements by him including a letter which Daily Mirror had run on 7 March 2009 titled “IDPs starving to death’ which a diplomat had “picked up” on 4 March 2009. She questions about the innuendos made by Dr. Varatharajah regarding starvation and claims that people had to bury the dead where they were killed. Perhaps Dr. Varatharaja can show where these skeletons are!

All the 5 doctors denied they were pressurized to recant

The media asked every question that needed to be asked. The doctors gave their answers including Dr. Varatharaja. Everything he now negates he affirmed in 2009. How can his word be trusted? Anyone can to their advantage keep changing versions. How morally correct is this?

Interview with the Doctors who served in uncleared areas

All the above was told not by the other 4 doctors but by Dr.Varatharajah himself.

Both Dr, Sivapalan and Dr. Shanmugarajah admitted they had worked with the LTTE. All the doctors admitted they initially thought LTTE were liberators. They even apologized for false information given to foreign media. 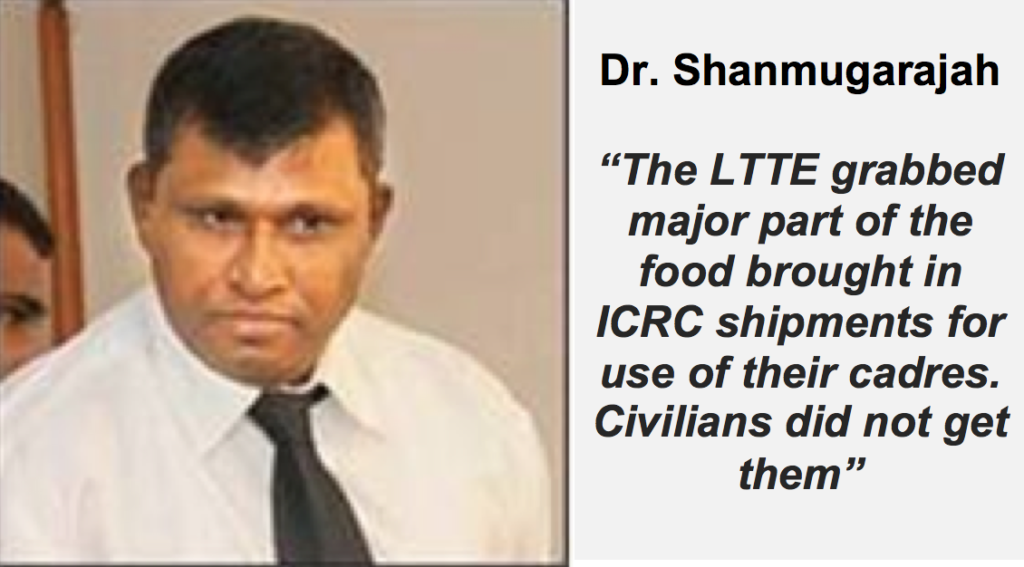 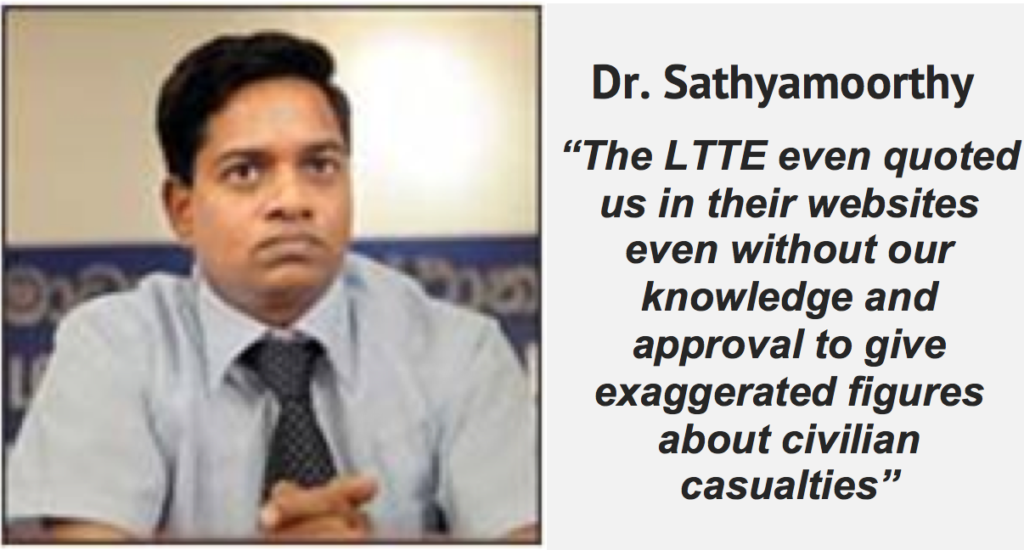 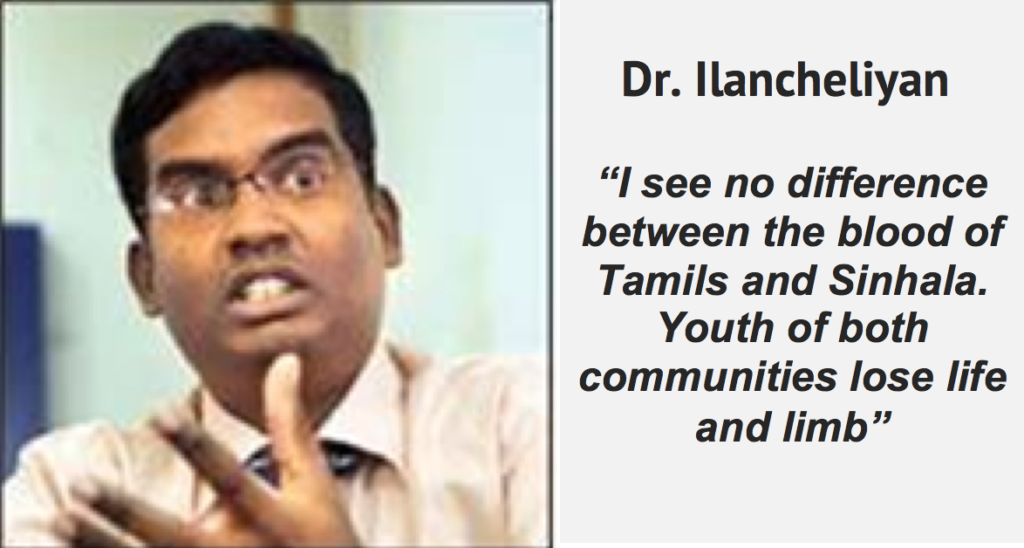 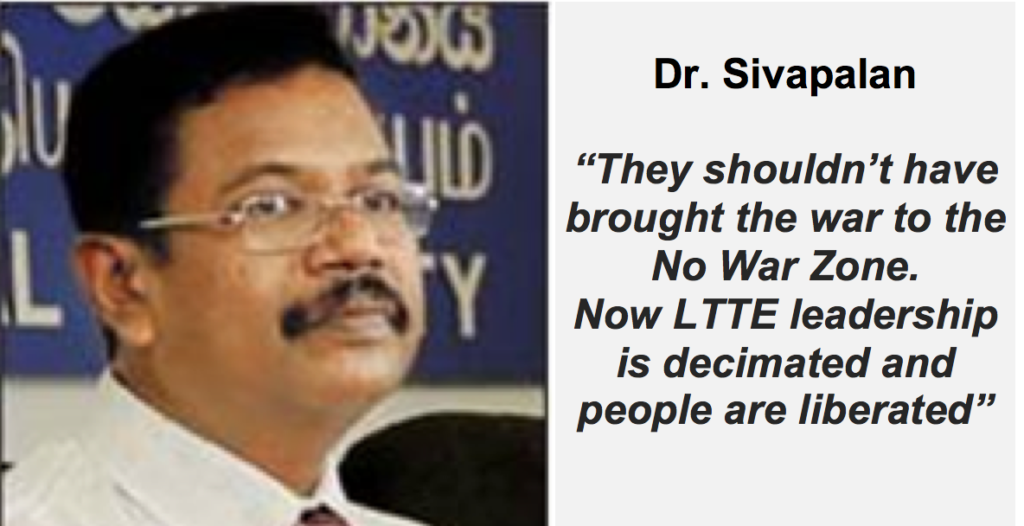 Dr. Varatharaja admitted that the LTTE used their names for false propaganda against the Sri Lankan Government.

Dr. Varatharajaadmitted that the LTTE had put their names on the internet with statements purported to have been made by them.

Dr. Varatharajaadmitted that they were not in a position to even object and came to know that the LTTE/Diaspora had used their names only afterwards.

Dr. Varatharajah and family arrive in US to their 2ndhome.

In December 2011 – Channel 4 – Callum McCrae visits him for an interview.

In November 2012 – Illangai Tamil Sangam invites him to give a speech at their annual event in New York where foreign dignitaries and US politicians were also present.

Pro-LTTE website claims Dr. Varatharajah is living in exile in the US https://www.tamilnet.com/art.html?catid=13&artid=36833

In 2014 – he flies to Geneva, Switzerland to speak on human rights

In 2015 he flies to Johannesburg, South Africa to meet Yasmin Sooka

Who is funding all these trips?

After leaving for US, Dr. Varatharajah now reverses all that he said in 2009 to the international media.

Dr. Varatharajah is interviewed by BBC – he now changes his story

“Tamil Tigers neither forced us nor did we exaggerate casualty figures”

“Every day, we received hundreds of casualties.

I only told what actually happened on the ground.

Tamil Tigers neither forced us nor did we exaggerate casualty figures,”

There was no blood and no anesthetic. Many wounded died as a result.”

‘I cried every day’: inside Sri Lanka’s ‘No Fire Zones’

“They attacked the hospital.

“Blood was not given at all.

“We gave some pain injection, and we thought he would die within about one hour –

but he took a long time to die”

The reversal of Dr. Varatharaja must be taken with the 10 May 2012 affidavit by the other doctor who served in the war zone – Dr. V Shanmugarajah. To date he has not reversed his affidavit or claimed he was forced to do so.

So the only doctor to be given asylum by the US begins a life of globe-trotting to tell a version of the conflict he keeps changing to his advantage and he’s found haven in teaming up with others doing the same. This has culminated in venturing to the film and book publishing circuit where in May 2019 Dr. Varatharaja’s ‘Memoirs get written by Kass Ghayouri “A Note from the No Fire Zone” which unsurprisingly gets nominated for a Nobel peace prize. Look who is also present at the launch the former UNHRC head Navi who has exposed her bias and hypocrisy finally to the world.

His career in films started with the screening of “The Lamp of Truth” screened on 30 Nov 2019 in Toronto, Canada. 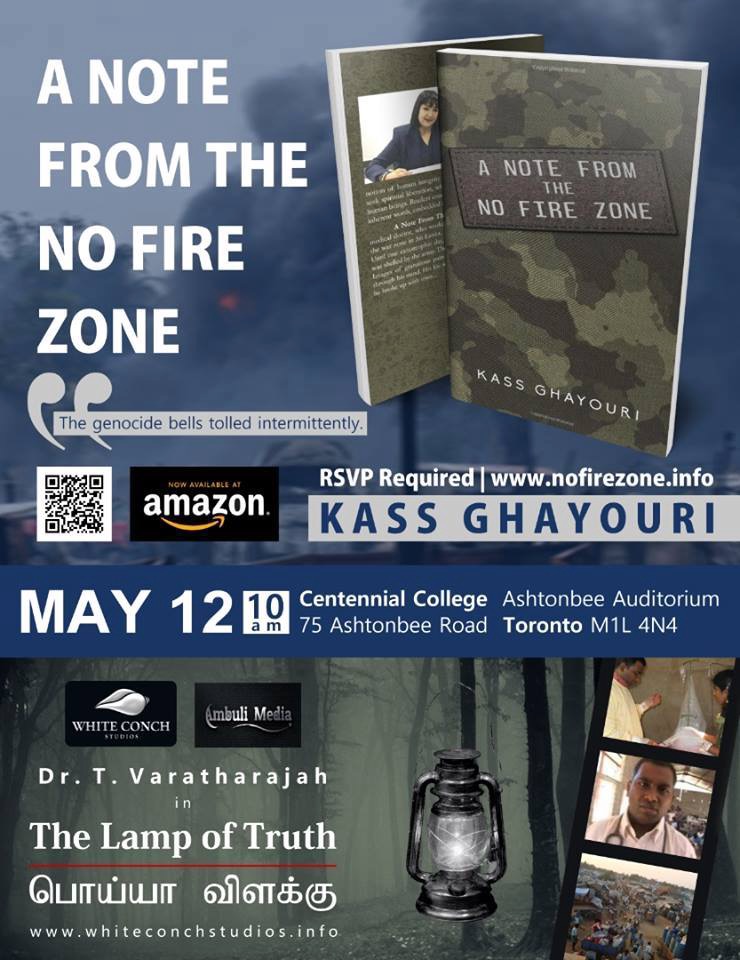 The latest venture is teaming up with EU employee who instead of looking into the interests of South Africans is 24×7 busy going after Sri Lanka’s President & military on behalf of her comrades in the LTTE who are domiciled overseas. Her anti-SL entity plugged into the NGO that is paid to look into South Africans has been preparing over 70 reports since 2014. Now who is sponsoring these tours & events? The latest venture is in partnership with this obsessed LTTE ‘comrade’ whose latest reports quotes Dr. Varatharajah against yet another Sri Lankan military personnel.

Dr. Varatharaja left for US in 2011 and has been living overseas since but he remembers only in 2020 that he was tortured. Leaving aside his period in Sri Lanka or even the interview in July 2009, Dr. Varatharajah had enough and more time and occasions to add the torture fairytale to his talks across the globe. He could have done so in Geneva in 2014. He has been visiting many countries delivering talks on human rights – he could have easily brought up his own example of torture if it had happened. Why is he doing so only in June 2020? Is there an auspicious timing for these revelations?

There is much that does not tally and raises suspicions about these latest revelations and when it comes from the reports of an obsessed LTTE comrade, these tales are only good for the bandwagon of people using LTTE to make money & secure global positions and fancy lifestyles for themselves through lies. If only, Prabakaran was alive you can be sure that none of these people and parties will be doing what they are doing including Dr. Varatharajah.