If any country knows what it is like to be battered and humiliated by the world, it is Germany. Germany has come far. After 2 World Wars, once considered the enemy of the Allies, Germany is today the co-partners with the Allies. Germany that faced a Victor’s Tribunal, is today their partner. Germany knows only too well, what Germany suffered, how Germans suffered and the battering their country & people received unfairly. Is it much to ask Germany to look at Sri Lanka from the lens of the victim that Sri Lanka now is in the halls of the UNHRC. Sri Lanka took a morally high stand in its refusal to treat Germany & Japan who were stigmatized by the world after 2 World Wars. Sri Lanka wanted the world to treat Germany & Japan as a friend and to help them rise again. Today, all our friends are cornering us, unfairly simply because of the power of lobbying and gun-boat diplomacy that is the hallmark of the western political system.

Sri Lanka may be a small island nation but small as we are, we have made memories that we continue to cherish.

Our ties with Germany started in 1953 when Germany’s first ambassador arrived just years after World War 2 ended & during Allied occupation of Germany. He was Dr. Georg Ahrens who was warmly welcomed by the Buddhist associations of then Ceylon, inspite of the treatment Germany was subjected to by the Allies which were powerful western nations. Fast forward to 2021, the Germany that Sri Lanka treated as a friend when powerful nations treated Germany as their enemy, is today part of a bogus 5member Core-Group unfairly hounding Sri Lanka. It is good for our ambassadors in Germany & Japan to bring these aspects of the past to Germany’s/Japans attention. 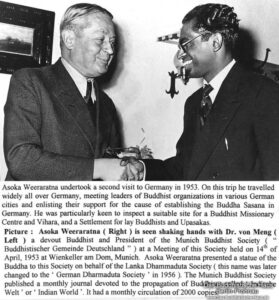 Both Germany & Japan were regarded as pariahs by the international community and virtually degraded by the victorious allies.

Japan would remember how Sri Lanka defended Japan at the Peace Treaty of San Francisco in 1951 when Sri Lanka went the extra mile to say that Sri Lanka would not accept any reparations from Japan as that would affect Japan’s economy.

In Japan’s darkest hour, Sri Lanka became a needed friend. Sri Lanka’s speech quoted the words of Buddha. When Sri Lanka needed a friend in Japan, Japan simply took no side but abstained in all of the UNHRC resolutions against Sri Lanka.

While Japan & Sri Lanka share a long Buddhist heritage, Germany is grateful to Asoka Weeraratna, a young Sinhalese businessmen and the German Dharmaduta Society for helping spread Buddhism across Germany in 1950s. 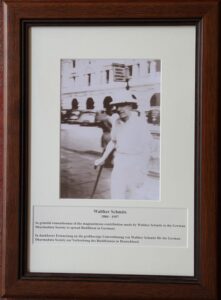 A country worn out by war, Germans globally humiliated and regarded on par with Hitler needed the teachings of Buddha to bring peace of mind & solace. Germany may like to recall the pioneering service by Ven. Balangoda Ananda Maitreya Maha Thero and Ven. Nyanatiloka Thero who passed away the same day as Walther Schmits who served in the German imperial army & later found solace in Sri Lanka & the teachings of Buddhism. Walther Schmits even left the German Dharmaduta Society with of DM 550, 000. Ven. Nyanatiloka Thero was afforded a State Funeral with PM SWRD Bandaranaike also attending.  Paying tribute to the late thero a German Buddhist Guido Auster declared “a gratifying result of this great man’s activity was the bridge of friendship he has helped to build between the people of Sri Lanka and his home country Germany’.

Wilhelm Geiger was a pioneer of Sinhalese philology and translated the ‘Mahavamsa’ written in Pali to English.

Friedrich Nietzche too spoke on Buddhism in his writings.

The scholars like Karl Eugen Neumann, Oldenburg, Karl Seidenstucker, Georg Grimm dwelved in much research on the Pali Buddhist texts.

Friedrich Moller, a teacher from Hambur who arrived in then Ceylon in 1953 ordained as Bhikkhu Nyanawimala.

Germany’s present actions saddens us in particular when many Germans are embracing the teachings of Buddha and many Germans annually visit Sri Lanka and have made great friends out of Sri Lankans.

Increasing numbers of Germans are switching off their worries along with their mobile phones and immersing themselves in Buddha’s teachings.https://www.dw.com/en/buddha-enjoys-boom-in-germany/a-1231623

“There have never been any Buddhist wars,” Schneider said. ” I think one of the things that people fear these days are extremist groups in all religions. Being the middle way, Buddhism is against extremism, you cannot be a Buddhist extremist.”

A video documentary on the Buddhist Mission to Germany from Sri Lanka. Released on the occasion of the celebration of the 60th Anniversary of the Society on Sept.23, 2012.

Sri Lanka is not asking much. Everyone must remember that Sri Lanka ended 30 years of terrorism that the UN and international community failed to end inspite of Sri Lanka following their recommended ceasefires, peace talks, foreign mediated ceasefires and even foreign peace keepers & foreign monitor presence in Sri Lanka. None of the questions being asked of Sri Lanka was asked during the 30 years of conflict against the LTTE. After having ended LTTE terrorism Sri Lanka has not witnessed a single LTTE suicide, assassination or recruitment of children as child soldiers. Bloodshed was part of our lives across 3 decades when LTTE committed pre-meditated murder. The statistics by the GoSL collaborating with western sources including UN Country Team as well as dispatches of US and UK military attaches, confirm the total deaths in the last phase of the conflict was less than 9000 inclusive LTTE dead. The 9000 dead, against the killings by LTTE since 1980s till 2009 and the fact that there has been no LTTE related killings is the positive aspect and meets the threshold of proportionality permitted in international humanitarian laws during an armed conflict.

Germany was never allowed to breathe as Allies occupied Germany till 1955 (10 years after conflict ended).

Germany is in the core-group attempting to bring another unfair and unjust resolution against Sri Lanka, we only appeal to Germany to tap their conscience and ask how fair and morally correct this is!