There are some people who sit on cushy taxpayer paid platforms & promote privatization while others also mandated to function as a government body accepts foreign funds compromising their ‘advice’ to the state. If entities are not working for the state, do the tax payers require to pay for them? Are these entities not better off being privatized first?

The Central Bank of Sri Lanka was established in 1950 as a semi-autonomous body & is governed by a 5 member Monetary Board. CBSL is the sole authority allowed to print currency (notes & coins) CBSL is the economic advisor and Banker of the Government of Sri Lanka.

Though CBSL was created after independence its first governor was a Britisher (John Exeter) who served from 1950-58. N U Jayawardena became the 1st Sri Lankan Governor in 1958. Ironically the 13th Governor was also a foreigner by virtue of his passport and not being a dual citizen (A Mahendran)

The two main objectives of the CBSL is to maintain financial system stability & to maintain economic price stability. 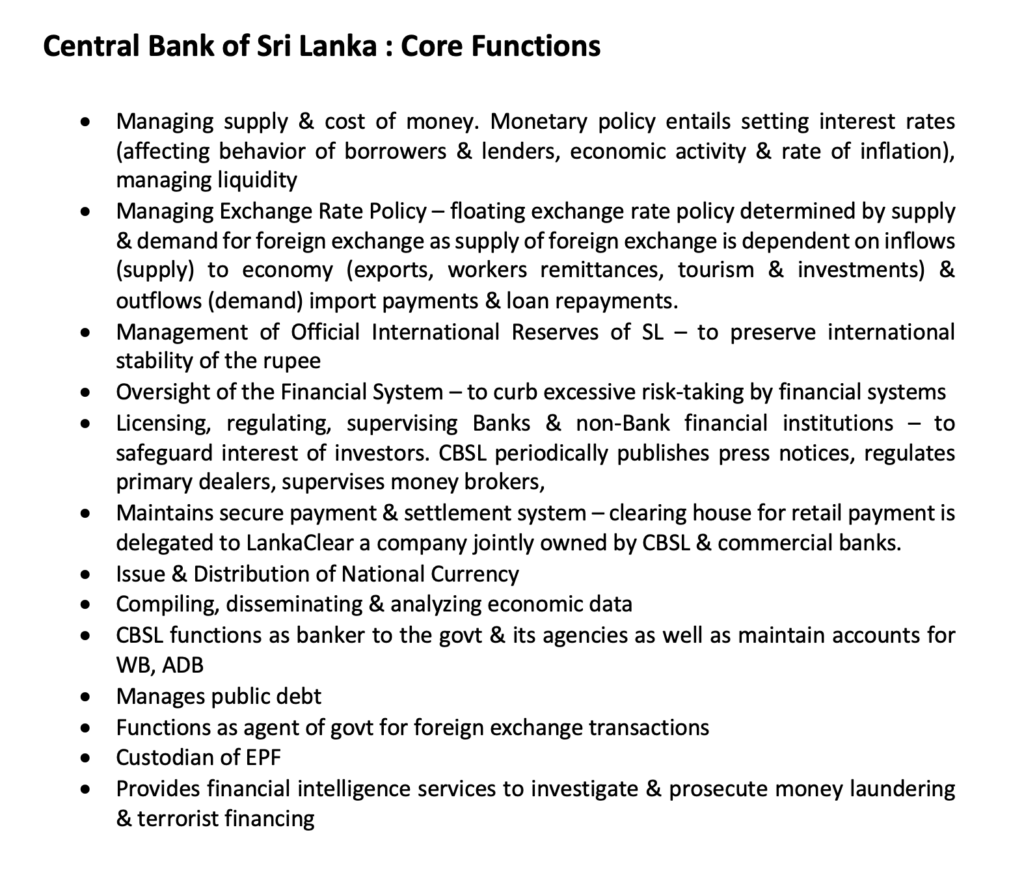 The CBSL is a body staffed with over 2000 – all paid by the Sri Lankan taxpayer. Their salaries and remunerations far exceed that of normal public sector.

Why are CBSL top management protecting their seats & disallowing room for inclusion of new private sector professionals (at least middle management) to pool in their ideas for the country?

If a local body paid by locals is more interested in pleasing the demands of external parties resulting in the demands of the external parties prevailing but given the notion that it is for local interest, do we need to have the taxpayer pay for such hypocritic advice? We may as well privatize this function as well – if the solutions being offered are not in the interest of the country. Why should locals have to pay for such?

Next we move on to another state entity – the Institute of Policy Studies (IPS) is supposed to be the premier economic think tank in Sri Lanka established by an Act of Parliament in 1988.

How far is the IPS ‘independent’ if since inception it has been collaborating with the Dutch govt?

IPS Chairman is a member of many foreign neoliberal think tanks funded by foreign governments to advance economic policies advantageous to them. How does that make IPS ‘independent’. The chairman was Senior Advisor to late Mangala Samaraweera in 2017 and was promoting the sale of state enterprises & proposing deceitful strategies to justify its sale.

This IPS Chairman proposed privatization of public utilities by first replacing Board members of the Public Utilities Commission with ‘independent’ directors implying foreign ones or locals doing the dirty work of the foreign parties.

How much of their ‘research’ is independent or funded by foreign govts or think tanks to be advantageous for their decision making. If research is not in Sri Lanka’s interest does the tax payer need to pay for such?

Do we need a government think tank which is also funded by the Sri Lankan tax payer if they are collaborating with foreign think tanks & who funds IPS ‘endowment fund’?

How ‘autonomous’ is IPS when its donors are UK, US corporations, banks & equity funds like Bill Gates Foundation, or the govts of Norway, Canada, Netherlands?

IPS drafted VISION 2025 & organized the Sri Lanka Economic Forum in 2016 that invited George Soros the architect of ‘coloured revolutions’ to Sri Lanka. It was at this forum that Ricardo Hausmann of the Harvard Centre who had an office in the Yahapalana PM’s office & handled the land privatization Bill linked to the MCC Land project.

Do the tax payers need to fund govt created institutes that pretend to provide fiscal, agriculture & energy policy of Sri Lanka but are actually spying for external sources?

Why do we need to have a tax payer funded think tank if it is working in foreign interests. We may as well have them fund it openly & privatize this entity as well.