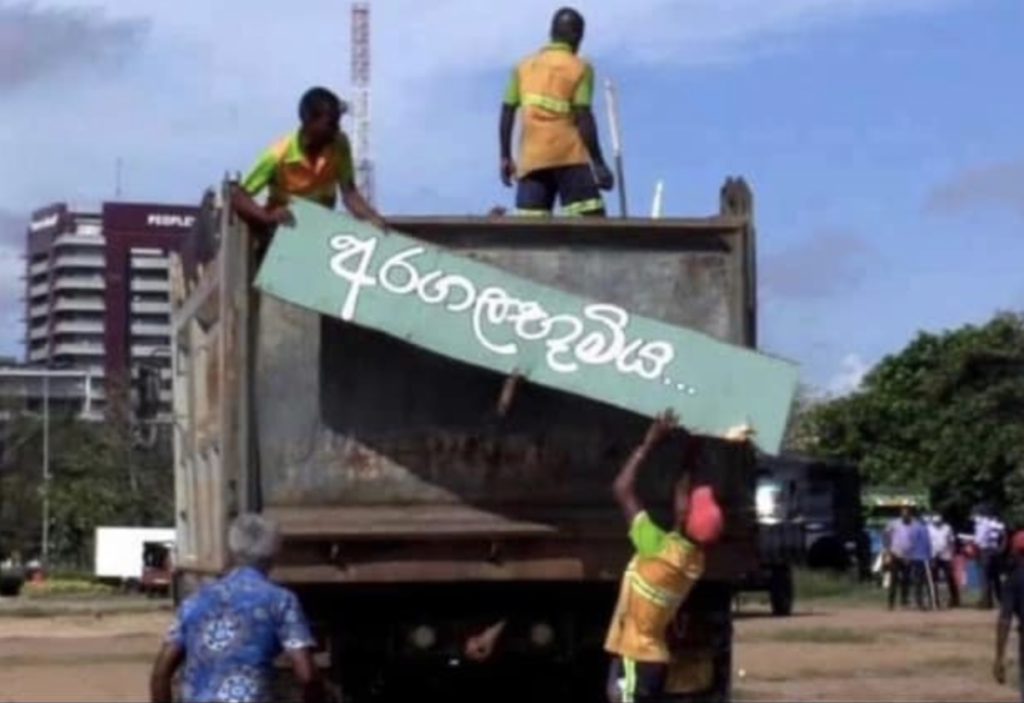 There is a lull all of a sudden. The silence appears to be a sign of awakening. It’s a bit too late to feel remorse. Undemocratic behavior is being laughed at the world over. We have to grin & bear the unruly mob action that tarnished the image of Sri Lanka. When history notes this ugly chapter, some facts must remain untarnished.

The biggest question is was the protest pre-planned or was it hijacked?

That it was hijacked is questionable in the light of the initial campaigners & ‘leaders’ allegedly being heavily funded & trained.

Investigations will soon reveal the extent of their funding & sources. 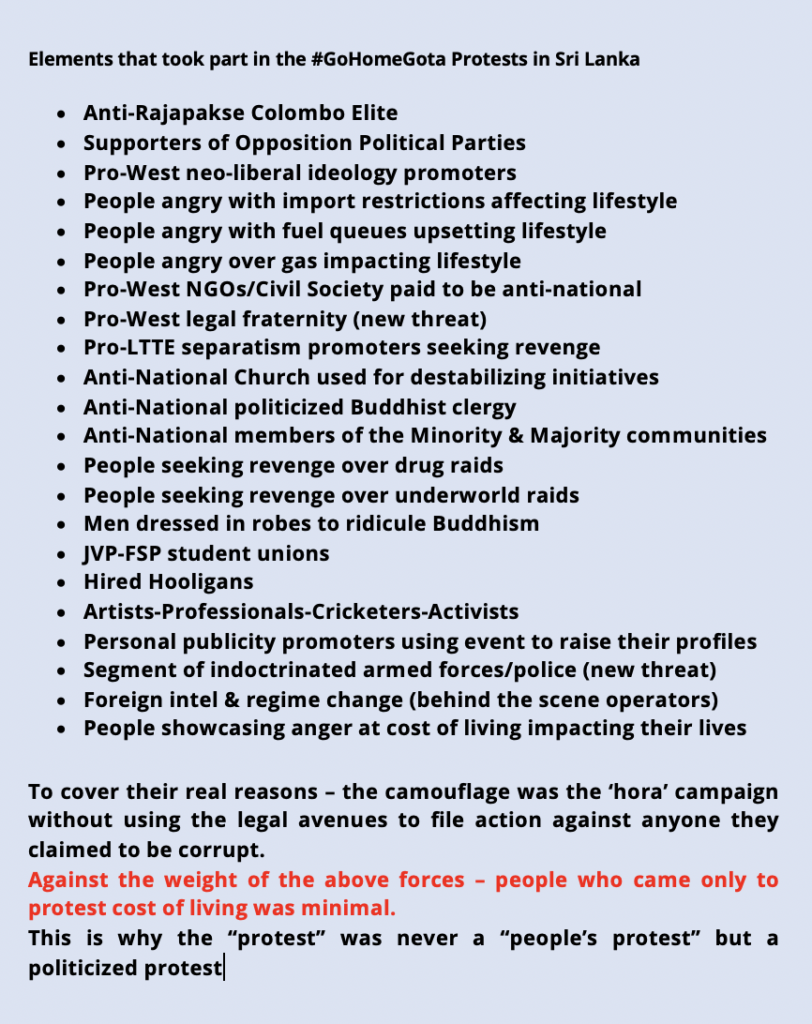 The new notion that it was hijacked is a smokescreen & covers the embarrassment of many who fell victim to fake news/disinformation/ misinformation.

Let it be noted that even the body representing the lawyers chose not to highlight the illegality of the actions by the protestors & their shocking statement was to ask protestors to only use public property ‘carefully’. This statement bowls their credibility to pieces. 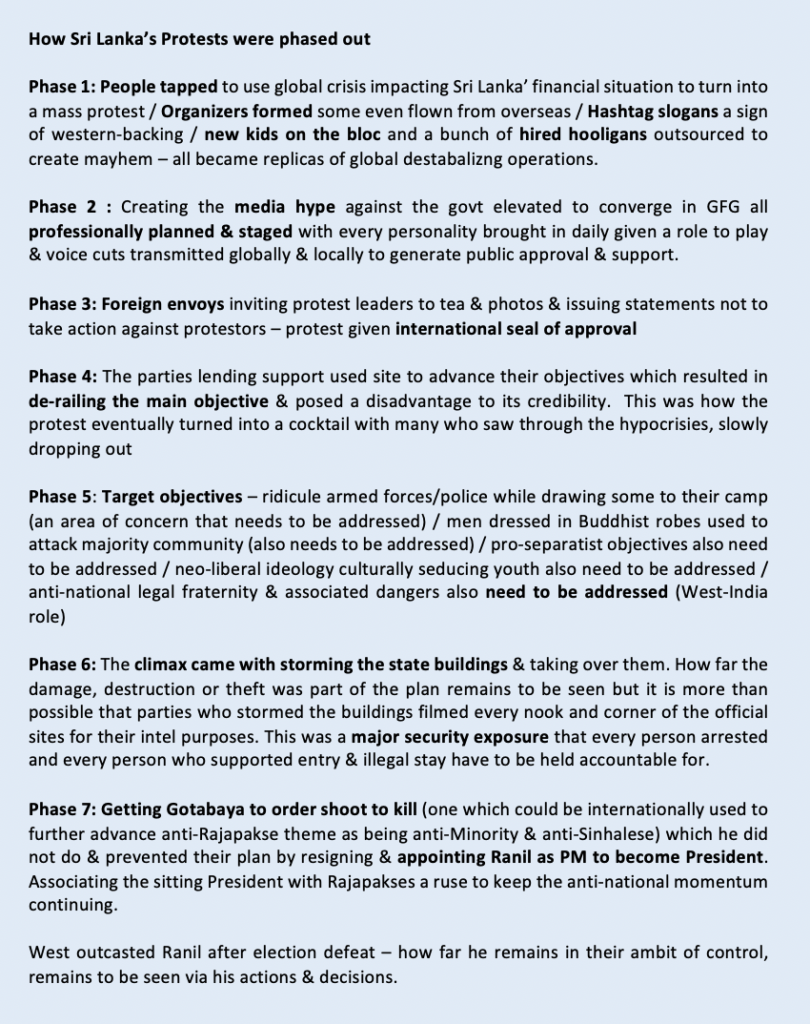 All of us are responsible. The handful that raised the need to control our loan taking, who proposed revenue making measures, who gave ideas & suggestions were ignored or sidelined.

Who are calling who corrupt?

How many people who preach against ‘corruption’ actually vote, based on principles of candidates? How many of these ‘preachers’ have voted for crooks because of their links to them assuring lucrative contracts & other benefits?

How many of the companies and big businessmen who were at the forefront of the protests & even the ones who kept low profile or preferred to remain invisible have funded campaigns of all the political parties contesting as they wanted to share the dividends of the victory?

Weren’t some of them the very coterie who were seen propping & prepping the protestors?

Were protestors ignorant of global crisis?

How many of even the initial protestors knew of the energy crisis globally and how cost of living was impacted around the world. The notion given by most including the trouble-making media was that only Sri Lanka faced an economic crisis and that the government & President was to blame. How fair was this allegation?

Yes, the President in power had his faults and bad decisions were countable but weigh this against the multitude of blunders by previous leaders – his errors were negligible compared to the treacheries of some. If people deem it justified to chase an elected leader due to petrol-gas queues their inaction during other far worse situations is baffling.

As for queues, the same people who complained over fuel-gas queues didn’t mind queuing for miles to take selfies inside the Presidents palace & office & after gas and petrol arrived, returned to their lives completely ignoring the catastrophic outcomes of their actions.

How far the crisis was incrementally engineered within, is a case study in itself. All those who prevented access to the former president intentionally prevented proper advice to reach the president. Those that the president probably relied on, ended up betraying him or he was not listening to even them or he was forced to listen to advice by the usual culprits.

We cannot disassociate the orchestrated plan to get rid of the PM, that kickstarted the burning of over 100 homes, that justified & prevented legal drives to remove an illegal protest site that the ousted president himself allowed with whose advice, we wonder!

Notice how media and particular channels were used to promote and penetrate the notion that Sri Lanka’s protestors were ‘peaceful’. No protestor that climbs barricades, that scales state buildings, trespasses breaks damages and indefinitely takes residence can be classified as ‘peaceful’ whatever arguments they present.

Little by little from their own mouths we are coming to know who was paid, who was not, … these are all clues to show the protest from start was never anything unplanned – from an idea subtly planted into the minds of a handful of people selected to kickstart a small movement that was being planned to generate into a momentum.

What took place was an extension of the January 6, 2021 storming of Capitol Hill and a leaf may have been picked from this to be staged in Sri Lanka and probably imported elsewhere too. 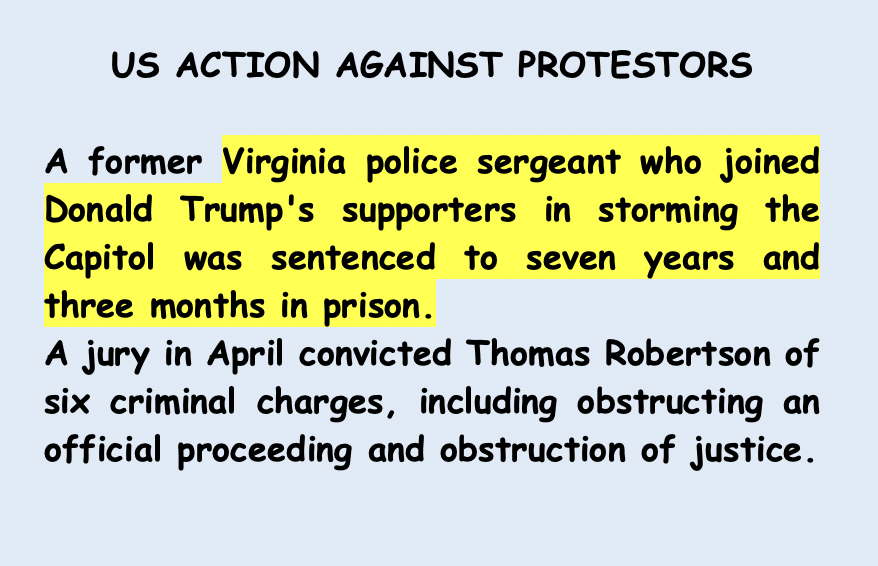 A protestor violating protestors mandate is breaching the law.

If Capitol Hill protestors were arrested and charged including US policemen who took part in the protests – the same must happen in Sri Lanka.

Colossal damage was done and the public must know the scale of the damage and theft that took place throughout the days state buildings were illegally occupied.

The falsely promoted narrative needs to be corrected. 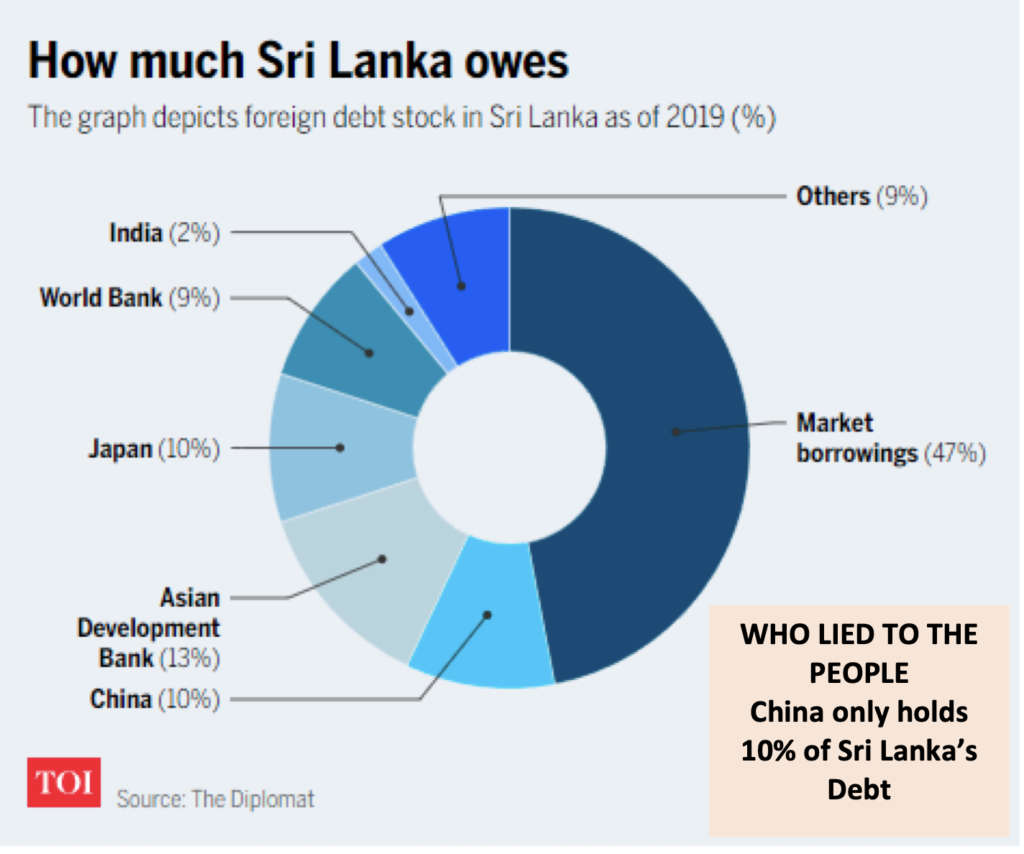 The president that was forced to resign is not responsible for the debt of the country, he was never corrupt and allegations of corruptions against him should be supported with evidence and not hyped propaganda. 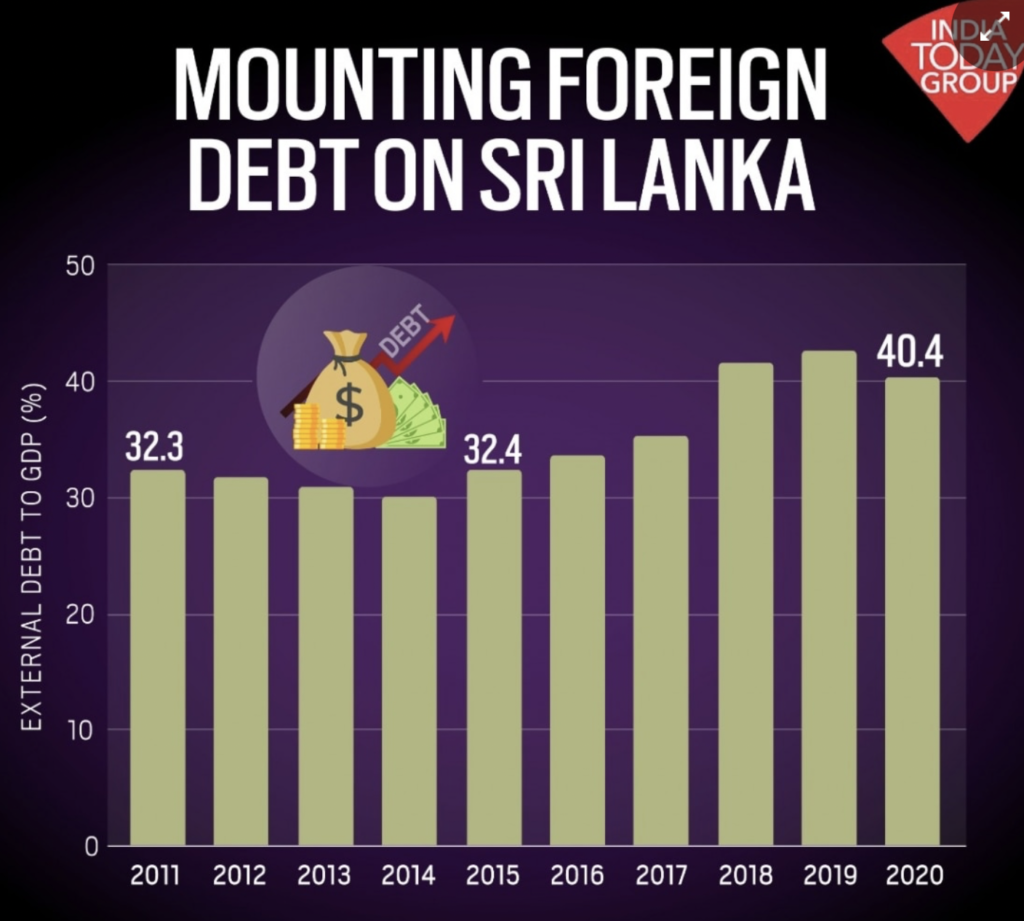 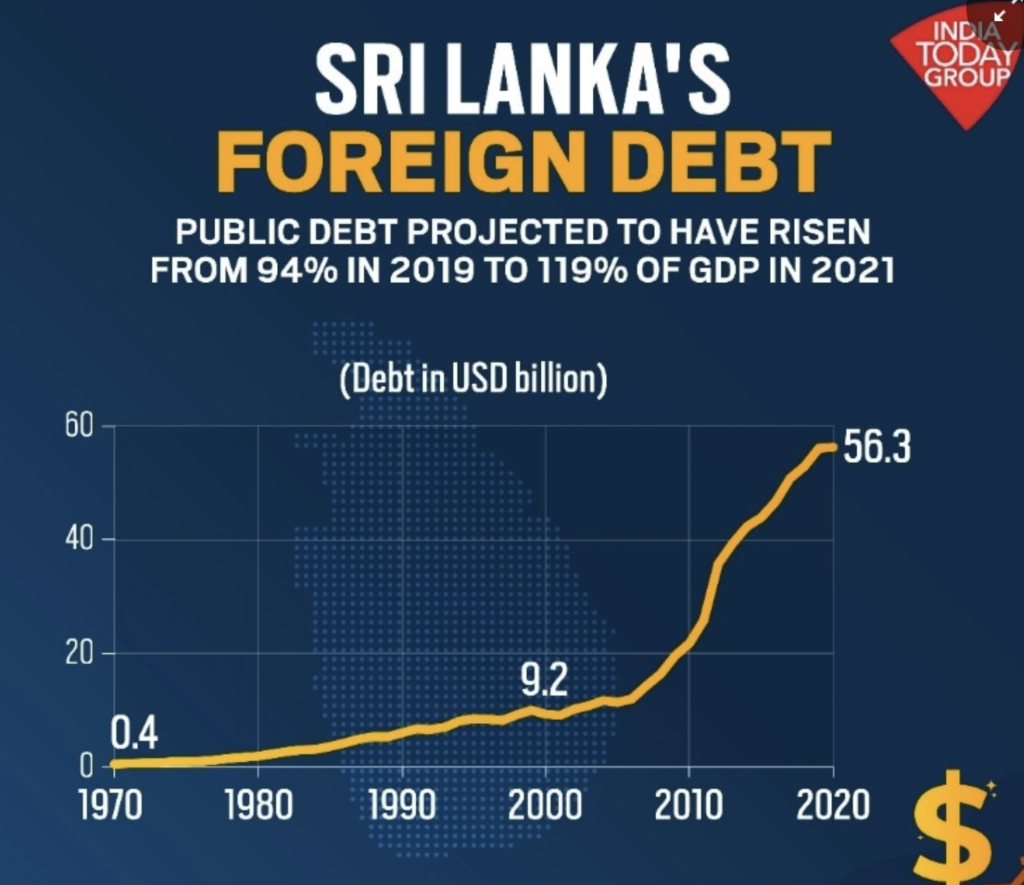 If all that he has been wrongly accused of is not true, was there reason to resign? All that he can be accused of is his unsuitability to adapt to a corrupt political system in a corrupt society & falling under pressure by the country he held dual citizenship with & trying to appease them.

The next question is if the former President was appeasing the parties plotting to oust him & replace him, why oust him in such a horrible manner?

This guess leads us to the incumbent President. Have they erred here too? The coming months will reveal this.

However, Sri Lanka with 90% literacy rate has created an ugly precedent globally justifying ousting of an elected leader in such an ugly & uncouth manner by those claiming to uphold rule of law & democracy. With rising protests globally also due to cost of living, will this mean protestors will storm & remove their leaders as well.

What an undemocratic example the aragala participants & supporters have shown to the world.