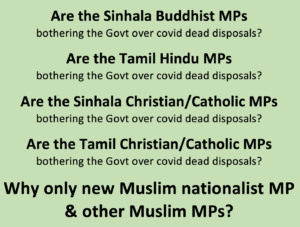 The controversy associated with covid-19 remains unanswered. We still don’t know how it came and the root cause for its spread. But we do know that over 1.78million are dead. It’s a shocking number. We also know that covid makes no differentiation nor does it favor any race, religion, nationality or continent. Covid doesn’t care if one is rich or poor and definitely no one can bribe it. We also know that the world health body is just as confused as the rest of the world as evidenced by the plethora of contradictory statements issued since the outbeak.

The decision to cremate dead was a national decision taken in the interest of the country and not any community. It is important for all citizens to realize this. It is also important to realize that decisions taken considering the future risk scenarios cannot be reversed just to please one minority community. It is wrong for a community to demand a Govt accommodates only their demand. A Govt cannot accommodate only the Muslim demand simply because others are not making demands. While Sinhala, Tamil, Buddhist, Christian, Catholic MPs chose not to make a fuss over covid cremations only the Muslim MPs in both Govt & Opposition took the issue even overseas completely destroying Sri Lanka’s image and creating unnecessary tensions amongst the communities. The Opposition Leader is continuing exactly what his parent party is famous for.

Rightly, what should have been done was for the bodies representing the Muslim community to have issued a statement that though cremation is not an option for Muslims, in view of the contagious nature of the covid the Muslims are ready to accept the decision taken in the interest of the Nation to cremate all covid dead. They should have not resorted to playing politics with covid dead.

Covid does not select its victims.

No one yet knows the true nature of covid. Vaccination manufacturers, too say they cannot overrule a person becoming covid infected again. All families of victims have had to forego some form of funeral ritual. A ritual is something passed down over generations. What is the science associated with rituals is another debatable topic? But, covid dead globally have had to forego customary funeral rituals. Likewise, in Sri Lanka too all the communities have had to forego saying proper goodbyes to the dead. Sinhalese-Tamils-Burghers & Muslims. So it is wrong for Muslims to present the notion that cremation is unacceptable to them and the decision must be changed.

Nowhere, was it said that Muslim demand for burial was extremist. What people continue to say is that it is not only Muslims who had to sacrifice their rituals but all other communities as well and they saw it unfair to only demand special privilege for Muslim demands only simply because others choose not to bring undue pressure upon the government during this covid crisis. Those that allege that the Sinhalese are not giving ‘respectful consideration’ to the Muslim request, must explain why Muslims are not giving ‘respectful consideration’ to the fact that Buddhists, Hindus, Catholics & Christian victims too have not been able to say proper goodbyes to their covid dead.

It is not extremist to demand burial but it is unfair to promote notion that Govt is intentionally targeting Muslims which is why people are angry.

Muslims are carrying out a propaganda that only they are made to sacrifice their rituals. Naturally, this sentiment has angered others into even questioning the logic behind the demand for cremations. How do extremist Muslims who became suicide bombers self-cremate their way to heaven? How does Allah accept suicide terrorists directly to heaven but covid- cremations are not? What is the science in this?

The argument that Muslim moderates can become extremists was a notion spread by Muslims. This statement accompanied a subtle political message “our votes unlikely” next election. It could have also meant “no Muslim funding for campaigns”. There has to have been a powerful underlying message seen in the manner politicians and political parties began reacting. The muttiya was put and it did its magic. Many feel the attitude is as a result of the support given by Muslims to pass the 20a.

If පාංශකූලයis not allowed, will that make Sinhala Buddhists extremists too?

There are some Sinhalese presenting the notion that to oppose burial is only showing Sinhalese as extremists and strengthening the hands of Muslim extremists and not accommodating the ‘reasonable requests’ of Muslims. What about the ‘reasonable requests’ of 90% of the rest of the population, who say protect the living before putting the dead first. Is giving burial a race to gain ‘moral upper ground’ and do extremists care whether we maintain a moral upper ground or not? This segment of preachers promotes, the notion that Islamic extremist’s sustenance can be cut off by agreeing to burials. We have to wonder what their argument for Easter Sunday is. Whether the plan was orchestrated by non-Muslim external parties, the execution of the mass murder was by Muslims using texts of Islam to justify killing people. The same texts are used globally to inflict terror & suicides missions’.

Are we to always live in fear that if we do not do as Muslims want they will inflict Islamic terror or are we being held to ransom on the threat that there is a thin line separating moderate Muslims from becoming extremists that if wishes of moderate Muslims are not given, that is a stepping stone to extremism. Translated, does this mean a Government has to only consent to do what Muslims want or Muslims will run into extremist arms!

We are also made to believe that we live in ‘stupid societies’ because we are strengthening extremists simply by saying burials are unsafe. As per this same set of Sinhalese, moderate Muslims have only Muslim extremists to turn to for a ‘sympathetic ear’ as moderate Muslims are making ‘reasonable demands’ while all others in saying consider the living above the dead are presumably making ‘unreasonable demands’! Look at how a ritual demand for a select community has caused tensions.

This is clear by the bandwagon of usual culprits taking to the streets against the Sinhalese funded by their dollar masters overseas. The whole scene unfolds a political agenda at play. How many of those shedding crocodile even know the victim families or have visited them to grieve & provide relief. This applies to the Muslim MPs too. 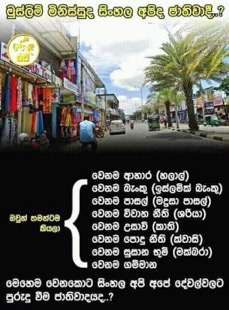 Reading this can anyone accuse Sinhalese of discriminating Muslims?

Muslims and the non-Muslims demanding only Muslim demand for burial has to be accommodated must take a step back. Covid is a global crisis. New strains and new health issues are emerging daily. In such a scenario it is best to take precautions than be sorry. Sri Lanka doesn’t have the economic viability to land itself in further economic chaos. Thus, a national decision taken to cremate must be accepted and respected. A national decision taken by a Govt can please all 20million citizens. It cannot even please all MPs in the Govt. But once the decision is taken all MPs must accept & respect it and not go on a personal campaign against it.

What good is it to argue over the dead on how the dead are to be deposed when the dangers of more dying as a result of covid lurks in the air.

If accommodating one community’s demand becomes a health risk and environmental risk to 90% of others, can a government be allowed to jeopardize the lives of others?

It appears cremations for Muslims are allowed!

There is also contention over expert opinion. One expert’s expert opinion cannot be accepted as final. Even the WHO has been changing its stand on covid. Even appointed committees cannot come to a conclusive agreement. Even scientists have differing views.

How should we draw a line over myths/rituals – science and common sense?

Shouldn’t we be protecting & safeguarding the living from falling prey to covid first?