Yes, the Sinhalese Buddhists are concerned. Do they have reason to be? Yes. Yet the concerns of Buddhists are never given an unbiased voice in the mainstream media, instead Sinhalese Buddhists are labeled as “racist”, “extremist” and even “militant”. Labelling Sinhala Buddhists is a ploy to refuse to accept the reality that moderate Muslims are being drawn towards radicalism not just in Sri Lanka but globally. This is not a problem only Sri Lanka is facing. The Muslims themselves must answer why moderate Muslims are becoming radicalized and who is manipulating Islam. The source of radicalism is in the Books. This is the ugly truth Muslims must accept.

One Law for ALL

No one can deny that this nation was built & defended by the Sinhala Buddhists. This historical role remains enshrined in the country’s constitution. There is no denying that the minorities enjoy rights too proved by their living conditions. No ethnicity or religion can come above the country’s law. Every citizen must abide by the law of the land applicable to all equally.

The Sinhalese Buddhists are concerned because of a new wave of “isms” attempting to dislodge the peace that prevailed historically.

For attempting to warn about the radical elements at play & warn the people of ultimate outcomes – the tactic has been to brand Sinhalese as ‘extremists’ and ‘racists’ to divert people’s attention from the real problem. This tactic is well-funded and well-choreographed using multiple communication modes and drawing personalities who would do anything for money!

How long will labelling Sinhala Buddhists hide the growing problem of Islamic extremism?

By labelling Sinhala Buddhists, the radicals are only buying time to carry out an underground exercise to increase radicals by drawing more Muslims claiming Muslim demands are not met!

On what grounds should a parallel law suddenly emerge to be accepted by all when it is not applicable or relevant to over 90 percent of the Sri Lankan populace?

A society cannot function with parallel laws & a quasi-legal system which makes followers of this parallel law believe their religion, their views are Supreme Law and above the National Law.

The drumming of this idea into the heads of their followers has caused immense conflict and is brewing trouble unless stopped by clearly stating that no customary religious minority law is above the National Law.

Sinhalese Buddhists are concerned because Buddhist cultural heritage is being destroyed, Buddhist archeological and historical cultural monuments are being destroyed. Devanagala Raja Maha Vihara is under threat & even being stoned. This is nothing that can be denied or swept under the carpet by carrying campaigns calling Sinhalese racists.

The sudden violent behavior in Muslims is noticed & Sinhalese Buddhists are rightfully concerned because the Muslims they were peacefully living with are being radicalized and transformed into adopting a new wave of “exclusivity” evident by the increasing numbers of women in black attire, exclusive Muslims schools springing up and increase in unfair demands.

Muslims claim to want to live ‘peacefully’ – if so why undermine this by requesting only their laws, their customs, their rituals should come first or be accommodated by all others. 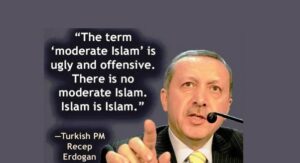 The rise in demands and the manner these demands have become accepted using deceptive means of influencing has enabled Muslims to obtain for themselves exclusive food labels, banking, dress codes that did not exist, certifications for which non-Muslims have to pay Muslim organizations conflicting with state taxes.

In Islam are people divided as Muslims & non-Muslims? Yes

Are Non-Muslims classified as non-believers are infidels? Yes

Is there equality for non-Muslims with Muslims? No

How can Muslims then demand equality from non-Muslims?

When this question is raised Muslims will quickly rise to smoothen the situation with intent to simply sweep the issue from being addressed!

The aggressive rise in demands for legal “exclusivity” towards Muslims does not advocate any policy of compromise or peaceful coexistence with other communities and is making not only Sri Lankans to ask what Muslims are really upto but the West is also now asking these same questions!

It is not Sri Lanka but the West that has come up with four phases to Muslim expansionism:

Phase 1: migration to non-Muslim host country, Keeping low profile, request for humanitarian tolerance, no demands on host nation. When Muslim population are 2 percent they remain peace loving (ex: US, Australia, Canada, Norway, Italy and China – where Muslims follow the One Child Only policy without fuss)

Phase 2: Requests for Muslim representation in all spheres, Request recognition of Sharia law to their community while proselytizing. Openly condemn “radicalism” and organize inter-faith dialogue and events and position Islam as a religion of peace and that Sharia is not a threat by getting uninformed non-Muslim leaders to support.

The website www.thereligionofpeace.com keeps track of the number of violent jihad attacks.

It has become a practice for both Muslims and Tamils to hide their follies and wrongs behind the cry of “ethnic discrimination”, “hate campaigns” to cover up accusations made against them.

It has worked well to camouflage their ulterior motives by internationally promoting Sinhalese Buddhist as “extremists” and using the power of money.

Whatever theories or excuses being propagated for the growing resentment, the Muslims cannot disagree that there is an underground plan as well as an open strategy to exercise Muslim domination over non-Muslim nations – it is the Muslims who need to step back and digest the accusations and decide to peacefully coexist with the other communities while ceasing to demand exclusive status for Muslims.

Many Muslims donate blood when it is against their faith to do so, a large number partake liquor and smoking – many of these innocent vices are all taboo when full Sharia comes into effect and Muslims in Sri Lanka may like to ponder how drastically their lives are likely to change and all they need to do is to see how disastrous the lives of Libyans, Iraqi’s, Afghans, a host of Sharia following African nations and now Egyptians are.

Like the West, Sri Lanka is concerned about the growing influence of extremist elements of Islam taking over the moderate Muslims who had been living peacefully in Sri Lanka because “There is no moderate or immoderate Islam. Islam is Islam and that’s it” (Recep Erdogan – Turkey PM)

As the author and historian Serge Trifkovic states: “The refusal of the Western elite class to protect their nations from jihadist infiltration is the biggest betrayal in history.” – we can say the same of Sri Lanka’s politicians.

Sri Lankan leaders could have nipped the LTTE factor but it didn’t and that led to 30 years of conflict.

If Sri Lanka’s leaders do not address this radicalism that will affect all Sri Lankans including the moderate Muslims.

The moderate Muslims of Sri Lanka have to now play a bigger role and put an end to radicalism and extremism amongst their own and take over the role of representing Muslims instead of tasking that to radical Islamic groups & leaders. Will they?