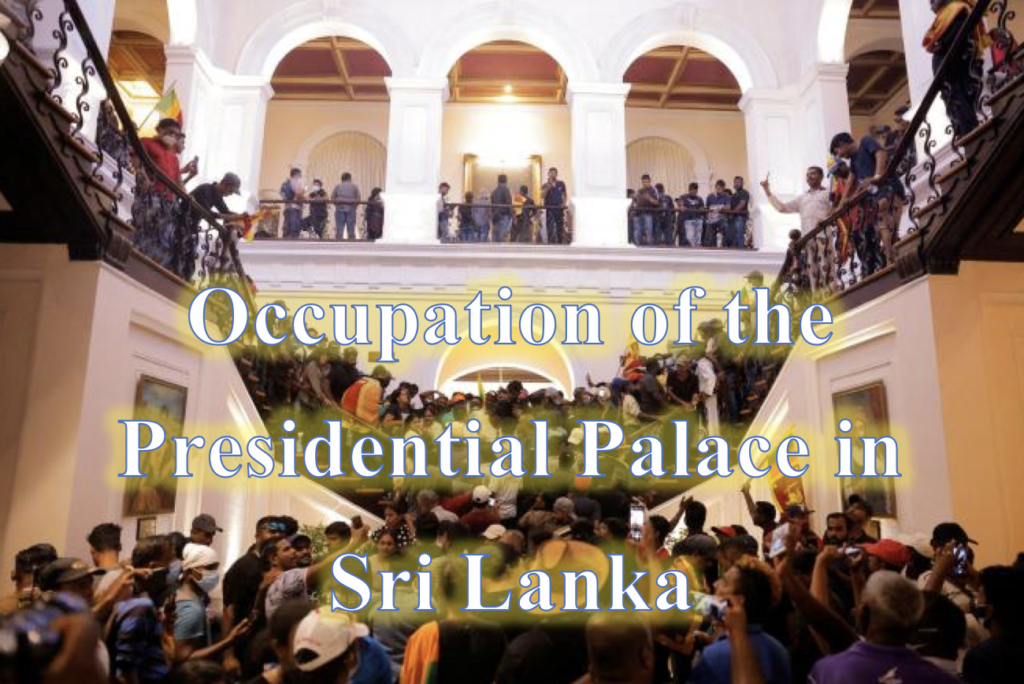 The political system has collapsed. Mob rule has taken over. Where lies the People’s mandate? Is Sri Lanka a functioning democracy or is life to function as per protests, protestors & their demands? What will life be under such a system of lawlessness & disorder when a handful decides what is law & who is right. How will this apply to diplomatic relations & international trade & business. The foreign envoys, the NGOs, the Civil Society groups, including political parties, that took part in this must provide the answers. Getting rid of one family has ended corruptions in Sri Lanka. Sri Lanka can look forward to much is the general consensus or is it! 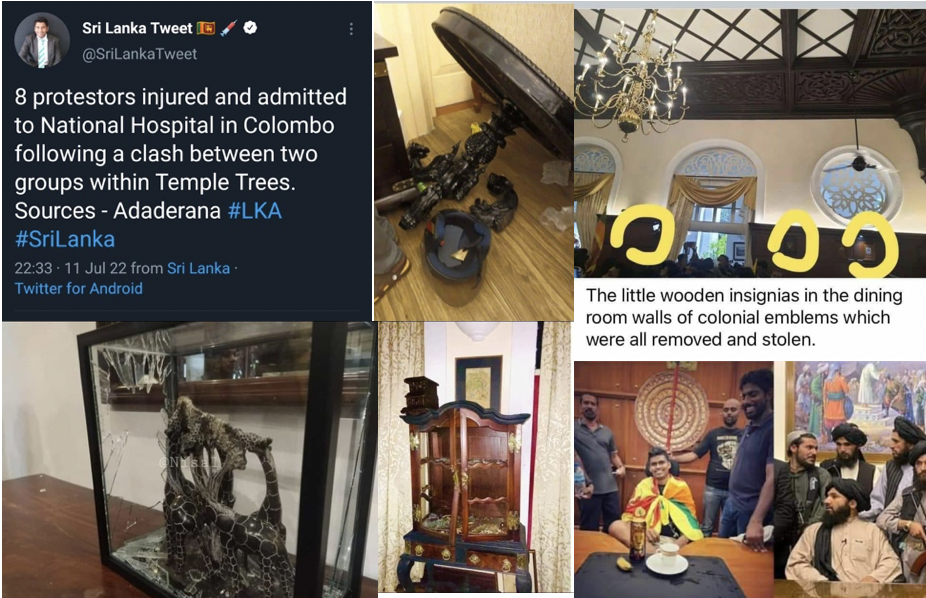 Who became the “aragalaya” – the aragalaya was easy to form as a result of mobilizing people who were suffering untold difficulties as a result of fuel-gas-medicine shortages. The govt apparatus is faulted for its failure to deal with the sensitive situation & come up with some form of relief while also addressing the allegations of corruptions.

From this frustration, it was easy to generate the hate and anger to up the ante and create a momentum to demand the removal of the President & PM believing that would resolve the shortages. It showcased the shortsightedness of people who were unknowingly being steered by “agents” who held personal vendettas.

Who were these “agents” – the Church, NGO/Civil Society heads, the legal fraternity, the LTTE Diaspora, the Unions and everyone who had a personal vendetta or a political vendetta.  The outcome to the country & its future was irrelevant. It was no different to the manner politicians had politically destroyed the nations by their selfishness. The same applies to the corrupt Public Service and Corrupt Private Sector and even Corrupt Citizens. All are guilty of placing personal interests above national interests. Whatever excuses and justifications they present this is the fact.

The outcome was the removal of two elected leaders – initially the PM in May and now the President & caretaker PM in July. The aragalaya has presented a list of demands and one noteworthy clause is the right of recall. However, what percentage of the aragalaya constituted the voting public to remove elected representatives (however much people personally dislike or hate them). Democracy is about bowing to majority opinion via election not getting chased out of office – what if the same happened to a CEO by this staff.

Political mandate by the People comes in Elections not Mob rule

How much of the People’s Power was “Sponsored”

Countries that experienced regime change via protest continue to struggle without a political system as a result of their inability to control the protestors.

Sri Lanka cannot live in isolation. We must abide by the political principles adopted by the world. If democracy means electing representatives by election, it requires representatives to be elected. Even the Arab Spring eventually had to create a political system agreeable to those that funded it. This is where the catch comes. While the protestors are presenting fancy demands – how much of it will be allowed to be implemented can be seen as things roll out.

At present we have a breakdown of the entire governmental system. Mobs have taken over 3 key state buildings and contrary to what the US envoy claims, looting and vandalism and public property destruction is shocking. Will those that funded & supported this occupation pay for the renovations? More importantly can those that supported the mobs remove the mobs from the premises & make a statement on the damage & destruction done? If those that created the protestors cannot control the rioters they created – what is the next option they propose to take?

The easy way out is to blame the law enforcements. Let’s not forget that numerous arm-twisting was done to allow rioters to carry out the protest & subtle warnings were given not to take action. Had the law enforcements taken action – the cry would have been that peaceful protestors were attacked & their rights abused.

There is stoic silence about the breaking of barricades and destruction to public property – this is a new version of “peaceful protest”. Soon, they will pass the ball to the armed forces & police accusing them of not maintaining law & order. What are they to do when diplomatic demarches are given not to take action.

Therefore, those that created the riots must now be asked to end them.

Slowly some of the supporters are feeling the pinch as they cannot return to their businesses or lives as nothing is today normal. When their profits and businesses get affected, they too are likely to blame the authorities for not taking action. We can watch how the pillow will be passed soon enough. Social media promoters themselves are now gone into silent mode slowily realizing the repercussions – too late.

Having unleashed mob rule – we return to the days of living in fright under both JVP & LTTE. Agree with them or face the consequences. They were judge-jury-justice.

On the other side of the spectrum is the tussle to take reigns of the democratic process.  While there is no constitutional provision for a national government – with the vacuum, politicians think the aragala have helped them to come into power. None of them are in the least worried or concerned or have given thought to how they are going to find the funds to run the country. They are only interested to sit in power thinking they can enjoy power the same manner their predecessors did. They are in for a rude shock.

Interviewing people who took part or promoted the situation is unlikely to get the pulse of the people except to use as a tool to advance part 2 of the agenda.

Let us look at the scenarios – on those vying to take powers. All for personal glory & none for national interest.

Sarath Fonseka – former army commander who led troops to defeat LTTE, was the common candidate in 2010 supported by West-India-Tamils-Muslims-Colombo Elite-UNP-JVP-TNA but lost the elections.

Champaka R– member of JVP in 1989, was in SU/JHU & SLFP, joined UNP, joined SJB and has formed the 43 Brigade & vying to be President. Legal case against him to be heard.

SajithP – leader of SJB and leader of the Opposition, lost Presidential Elections in 2019, the flipside of taking mantle in an interim set up is that failure will cause his election defeat in 2025.

Anura Kumara – JVP leader, party used by handlers to bring govts to power or do their ground campaigning, talks as if solutions are in hand but from facial and body language, looks to be reluctant to take over.

DullesA – allegedly a dual citizen of US which should promptly erase him from contest. Nothing significant done to be President or PM.

Same goes for Harsha/Eran/Nimal Siripala & a few other names being thrown into the air – there is a big difference in talkers and doers.

Bickering and bargaining are currently in place. The outcome will depend on the entities that are influencing them from behind the scenes. These are the same entities that are also influencing the ‘aragala’. The infighting has already commenced not only amongst the aragala, those that support it, those that funded it – all wanting a piece of the cake.  Nothing is done for free. All no better than politicians eventually.  Unfortunately, those that genuinely took part for real change are in for a worse Sri Lanka than they bargained for.

Some are now of the opinion that the President & PM should continue given the uncertainty of the present options.

While, this circus is taking place, the entities themselves are maneuvering alternate options.

The envoys are suddenly dashing to meet former President Sirisena. What will they offer him?

What if the solution arrived at by Parliament is rejected by the aragala mobs occupying State buildings though the general public agrees as interim measure?

What if the agents inside aragala also have differences & cannot arrive at an amicable solution?

What if this leads to another riot?

Will US envoy control the situation she helped create alongside others that supported it?

If the Parliament solution is rejected and the aragala solutions have no democratic mandate to be accepted, is the next option a military one? Who will lead this? Who is being manipulated for this?

The foreign agents that enabled the current situation did so as Sri Lanka was of geopolitical advantage to them. They are least bothered with what happens to the Sri Lankan People whatever community they are from. People are only used to advance their agendas. These agendas will not get changed because local agents advise them against such. Locals tapped are paid to serve. This is why NGO / Civil Society heads funded by them have suddenly gone silent. They will reappear only when they are given a new task.

US pivot to Asia requires the full implementation of ACSA-SOFA & MCC. This is what they want while via Church/NGOs/Political Parties they will advance their other programs. IMF is now being used to economically control Sri Lanka. Sabry & Nandalal were used to default Chinese loans & prevent any loan taking.

India is suddenly feeling the pinch. The statement of Subramaniam Swamy to send Indian troops echoes the fear that India may lose its influence over Sri Lanka. India influenced Tamil Nadu using Tamil theme, but Tamil Nadu is heavily influenced by Church which will follow West’s agenda. All those that speak on behalf of Tamils are not Hindus. This is where India has been fooled. India is realizing this too late. Now US like an octopus has its tentacles across all spheres of influence. But without ability to generate revenue, even US cannot sustain Sri Lanka.

This is where China can step into the scene. Will China provide a relief package and assist formulating a small interim political council to govern Sri Lanka & set economic development programs to get Sri Lanka economically back on track? Political sovereignty aligned to national security comes in the ability to be economically strong. Therefore, Sri Lanka must have a team to put this first by reviving the state revenue making apparatus for which China can assist. India can partner as Sri Lanka will want India to partner and not play the same destabilizing games India has a habit of doing. Role of US in post-regime changed countries will showcase US has no interest in the people or country except to fulfil its desires & this alone should remove US as a partner for progress.

The scenarios should provide food for thought. Let Sri Lanka not be raped any more than it has already due to selfishness and personal vendettas of people neglecting their duty to their Nation by being brainwashed to only make demands.