Sri Lanka before regime change had zero terror attacks since 2009, tragically just 4 years after a well-coordinated US-RAW-LTTE-TNA-JVP-UN-US-EU joint regime change over 350 dead on just one day with hundreds more injured or battling for life. While, those that were brought into power in 2015 are pointing blame fingers at each other, it serves no purpose for a nation now returning to the fear psychosis that prevailed throughout LTTE terror. This is not the change they were promised. Sri Lanka is today dealing with a weak & spineless government at the mercy of those that brought them to power caught between giving in to the demands made by those that brought them to power at the cost of angering their vote base & likelihood of a future election defeat. No amount of false flags engineered by their foreign support bases are likely to bring the present government back to power as things stand which explains why the government is reluctant to hold any form of election & increasing its unpopularity by not doing so. While our own security lapses are many, what we also need to take stock of is this ISIS movement & connect that to the sudden demand for foreign presence in Sri Lanka where Islamic terror provides the super camouflage to justify their entry. 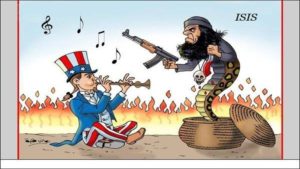 First is an article by Shwe Kalaung titled “Islamic state training camp busted in Sri Lanka” mentioning hike in ISIS in Sri Lanka, culminating in the death of a ISIS Sri Lankan fighter in Syria in 2017 who was eulogized as a martyr throughout Sri Lanka. Incidentally a Syria is claimed to be arrested after the Easter Sunday attacks. In January 2019 authorities came across an IS training camp in Wanathawilluwa near Puttalam lagoon where 100kg of explosives were found when the authorities searched for 2 suspects vandalizing Buddhist statues. The imam arrested at the camp confessed that the explosives were meant to bomb sacred Buddhist sites in Anuradhapura. Even by January 2019 CID were looking for 50 names IS suspects. Is that imam still under arrest, has he being charged under terror acts, have the 50 IS suspects been found & arrested – no one knows!

Shwe Kalaung links the arrest of Sri Lanka’s drug kingpin Makandura Madhush with the funding of Islamic State training camp in Puttalam claiming his network even includes ex-LTTE combatants. LTTE dealt in illegal drug trafficking too. Madhush operated from Dubai where he was arrested and the jewel heist investigations revealed a conspiracy to kill President Sirisena which again raises the question who benefits from the death of the President?

Arakan Rohingya Salvation Army (ARSA) formed in 2012 in Myanmar which masterminded the August 2017 insurgency by Saudi imam Ata Ullah confirms our doubts about Rohingya-jihadi links. ARSA is claimed to receive support from Saudi & funded via yaba pills, methamphetamines manufactured & sold to Islamic gangs in Bangladesh where ARSA gets training from near Rakhine State border.

Bangladeshi’s are regularly caught trafficking in Sri Lanka. Bangladesh being the epicentre for the Golden Horseshoe Caliphate. Coincidentally, a family member of the Bangladeshi PM also died in one of the hotel blasts in Colombo.

786 Movement is a doomsday prophecy according to author signaling complete global Islamic takeover by 21st century (7-8-6 adds to 21) This number was displayed in Myanmar food items imported from Middle East supporting jihadi cause. Myanmar Buddhists responded with 969 counter-movement.

Shwe Kalaung highlights a complicated network of illegal players. GCC countries (Saudi & UAE) masterminding terror funded by drug trade against Asian counterparts using ex-combatants also funded by drugs & linked to Islamic gangs. Both these groups probably have some unwritten understanding with foreign intelligence whose objectives are to create conflict & instability in targeted regions for geopolitical policy objectives of their governments.

The targeting of Shangri-la hotel in the recent Easter Sunday multiple bombings provides a clue to that geopolitical significance.

The other article is by Adam Garrie “Sri Lankan Authorities may have fallen into a trap set by a foreign power”. Garrie too refers to an ‘Indian-backed assassination plot against the President’ https://eurasiafuture.com/2019/04/22/sri-lankan-authorities-may-have-fallen-into-a-trap-set-by-a-foreign-power/

Some questions arising from this article are:

Adam Garrie does not mince words about the possible links to RAW & the NTJ attacks given that all of the warnings about the attacks are coming from India knowing Sri Lanka has its guard down as a result of forcing Sri Lanka’s Govt to open up its security apparatus to foreign-UN interference while placing mediocre officials to top posts.

How did Islamic terrorism originate?

More important than who are members of Al Qaeda, ISIS or any of its associate bodies is the question who created these entities, who arms them, who trains them and who supports & transports them from one country to the next to stir trouble.

Isn’t ISIS nothing more than a name change for al-Qaeda?

Zbigniew Brzezinski Jimmy Carter’s National Security Adviser was instrumental in creating the Al Qaeda and steered policy against the Afghan government and the Soviet Union. Brzezinski admitted in an interview in 1998 and in 2001 to the Le Nouvel Observator that US funded Al Qaeda/Mujahideen 6 months before Soviets invaded Afghanistan.

Former Director of Central Intelligence Robert Gates in his 1996 memoir admitted that $500 million in nonlethal aid was given to Mujahideen.

We can all recall Hillary Clinton’s admission “the people we are fighting today we funded them twenty years ago… and we did it because we were locked in a struggle with the Soviet Union.”

Brandon Turbeville claims “ISIS is being directed by Western intelligence, the GCC, and Israel that killing of James Mark Foley, US journalist working in Syria was used to justify aerial bombing of Syria.”

Tony Cartalucci writes that “as early as 2007 – the United States has been arming, funding, and supporting the Muslim Brotherhood and a myriad of armed terrorist organizations to overthrow the government of Syria, fight Hezbollah in Lebanon, and undermine the power and influence of Iran, which of course includes any other government or group in the MENA region friendly toward Tehran”.

He also claims “ISIS was harbored on NATO territory, armed and funded by US CIA agents with cash and weapons brought in from the Saudis, Qataris, and NATO members themselves. The “non-lethal aid” the US and British sent including the vehicles we now see ISIS driving around in”

Michael J. Springmann, chief of the visa section at the U.S. Consulate in Jeddah, Saudi Arabia, claims that the CIA insisted that the consulate approve visas for Afghanis so that they could travel to the United States and be trained in terrorism so that they could then be sent back to Afghanistan to fight the Soviets.

Closer to present Kosovo comes to mind and how the Kosovo Liberation Army was supported by US & NATO. Is it a surprise Kosovo was given independence with a massive NATO base inside Kosovo? Michel Chossudovsky writes “Bill Clinton Worked Hand in Glove with Al Qaeda: “Helped Turn Bosnia into Militant Islamic Base,”…. “British SAS Special Forces in bases in Northern Albania were training the KLA, military instructors from Turkey and Afghanistan financed by the “Islamic jihad” – the US and UK counter terror experts are now in Sri Lanka for what?

The plot to overthrow Gaddafi takes shape in much the same way – by supporting proxy Islamic groups clothing them as ‘rebels’.

After creating the ‘extremists’ as ‘freedom fighters’ and helping fan their extremism the patrons US-UK-NATO next denounce them as ‘extremists’ and justify going after them by force sending their troops often illegally.

What is bizarre about fighting terrorists created by their own is that every US-UK-NATO soldier getting killed in all of the countries US/UK/NATO stations them are killed by the very terrorists the US-UK-NATO have created, armed and support!

A Fox News report in March 2015 claims “one of the alleged leaders of ISIS in North Africa is Libyan Abdelhakim Belhadj, who was seen by the U.S. as a willing partner in the overthrow of Libyan dictator Muammar Gaddafi in 2011.”

The report goes on to say “It is clear that the West is not fighting ISIS, but instead, has clearly both created it and is intentionally perpetuating it to help justify its military and geopolitical maneuvering across the Middle East and North Africa (MENA) region, and advance its aspirations toward regional and global political, military, and economic hegemony.”

The next question is where does Indian intel fit into the scheme of things given that all of the advance warnings have been coming from India? We can all recall how Indian intel referred to LTTE as ‘our boys’ and functioned virtually with a carte blanch often without the knowledge or approvals of its government. Let’s hope the same is not being repeated. India must at all times remember that Yugoslavia & Soviet Union were fragmented and the balkanization of India is also very much on the cards.

Islamic jihad terrorists have found a great pawn in Muslims & Islam – rich or poor, ready-made suicide bombers are now easy to lure and if Sri Lanka is not to turn into another Middle Eastern theatre, Muslims must help authorities nip every avenue radicalism is encouraged because these are the areas that everyone who wishes to pivot to Sri Lanka taking over its geopolitically significant ports, trade lane access will now eye.

Time Sri Lankans learn to look at the larger picture and realize that anyone they elect in future has to be a person who puts country first & not some agent of those creating radical and extremist elements. It is advised to also screen the type of investments, the location & other factors by countries linked to these terror groups. These investments are likely to have bigger agendas in mind.