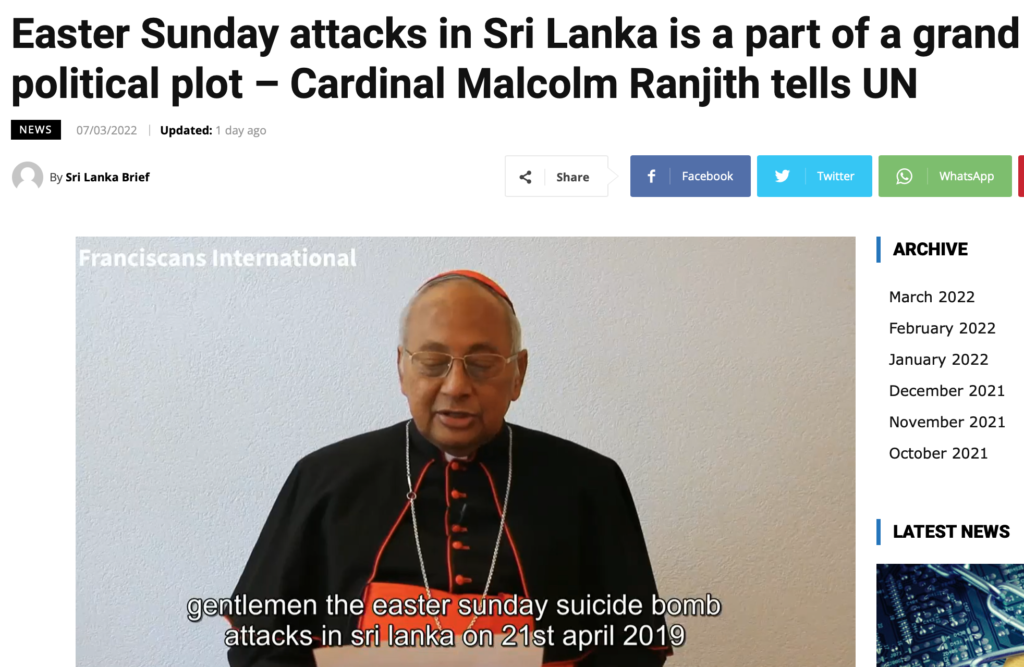 Sri Lanka’s post-independence has been flavoured by spice & ice – all of our momentous moments were erased by a handful that chose to go crying tale tales overseas. The noteworthy aspect of these tale carriers is the selective nature of their so-called “justice”. They deem fit to decide what should be defined as ‘justice’ within the prism of their belief. We have seen many a character scooting off to Geneva to deliver speeches to embarrass the nation, not shirking once that their statements are distorted & full of innuendos. Not only do they take pride in painting a bleak overview about Sri Lanka internationally, they think they can return as heroes for doing so. No country in the world garlands their traitors but Sri Lanka has an uncanny knack of doing so. This is creating more traitors who think they can emerge as heroes & heroines by betraying their nation.

The newest entrant to the annual Geneva circus is peddling a new notion regarding the Easter Sunday attack. If his claim is that the attack is politically motivated, is his trip to Geneva politically motivated too. If his claim is only God can provide answers, why go to Geneva & not seek an explanation why so many died inside Churches where they went to prey. There are other answers we seek from the Cardinal. A key question remains the unanswered question of the Church role in LTTE terrorism where a plethora of players were involved in indirectly fostering terror in Sri Lanka simply to advance the agendas of their foreign head-quarters as well as to fulfill a historical unfulfilled objective. Thus is the trip also to satisfy head quarters?

Ironically, we have had direct foreign presence for 443 years and indirect foreign intervention since 1948 via groups of puppets camouflaged in different forms. It has been all of these players who have been despatched overseas from time to time, to the halls of Geneva when their concocted lies appear not to be working locally. They take turns to betray the nation or when things hot up they clamor together to build a combined force.

If many have not noticed, while plugging a political motive for the attacks, the innuendos behind the Cardinal’s appeal for intervention is to “CONTINUE” the UNHRC investigations, illegally & falsely launched since 2011. Having produced no dead bodies, no names of dead to claim 40,000 or more died & relying only on annual tamashas and well-sponsored fake reports & invisible hidden witnesses – it becomes laughable to have the Cardinal even suggest that UNHRC plugs Easter Sunday into their scope of lies. This is indeed a grand move on the part of the script writers for obviously their lies are getting internationally exposed with countries also questioning the methodology of the UNHRC against a UN Member state.

What is interesting about the Cardinal’s request is that while he claims not to trust or have faith in local investigations, he wants to plug Easter Sunday investigations into the UNHRC investigations which even after 10 years has failed to prove any of their claims except trying to trap Sri Lanka into UN terminology & international legal googly’s. If one looks at the UNHRC reports it is clear that they are out to weaken Sri Lanka at every level & has little or nothing to do about any accountability for the last 3 months of the conflict which was the sole reason for UNHRC crocodile tears against Sri Lanka.

Let the Cardinal be once again reminded that while the Church remains silent about its role in LTTE terror where Church fathers & sisters have openly supported the LTTE so far as to go on street protests holding placards for Prabakaran & even running orphanages from which children were taken & turned into child soldiers, while missionaries were seen carrying out the historical quest of conversions which was why all LTTE dead were buried and not cremated (if we presume majority of LTTE were Hindus & should have been cremated) All of the LTTE diaspora are functioning from Western countries and majority of these entities were only created after the death of Prabakaran which is a clue to showcase the foreign influence over LTTE while another clue comes in the manner West-funded NGOs were quick to come to LTTE rescue using their staff & reports, while the west-sponsored media also did their role.

These same players are now being re-tasked to function within a newer script, obviously drawn up by the same invisible players. What role our closest neighbor plays in this we cannot tell but there is only a wafer thin line between fulfilling its self-interest & fulfilling its duties as a strategic partner. But the good Cardinal must explain why he is ignoring this neighbor’s role in the Easter Sunday scheme of things.

As for the people of Sri Lanka, all that we can wonder in surprise is the manner the Church flies off to Geneva when such trips were never forthcoming to save a child from becoming a child soldier, to stop LTTE bombing 24×7, to tell the truth about LTTE to the world, to even praise Sri Lanka’s military against the lies to justify R2P (another form of intervention camouflaged by the West)

As for the other characters presently in Geneva, they should explain why they did not bother to warn the churches when they knew of an imminent threat the day before the actual attacks.

If the ‘maha molakaru’ are the usual culprits, we should not be too surprised at the newest Geneva soliloquy. It’s all part of the plot! Ironically, the suicide bombers were just as victims as the hundreds they were brainwashed to kill.

Far more dangerous than them are those that pretend to be our heroes but are diabolical traitors, never hesitating to betray the nation & its people for 30 pieces of silver!