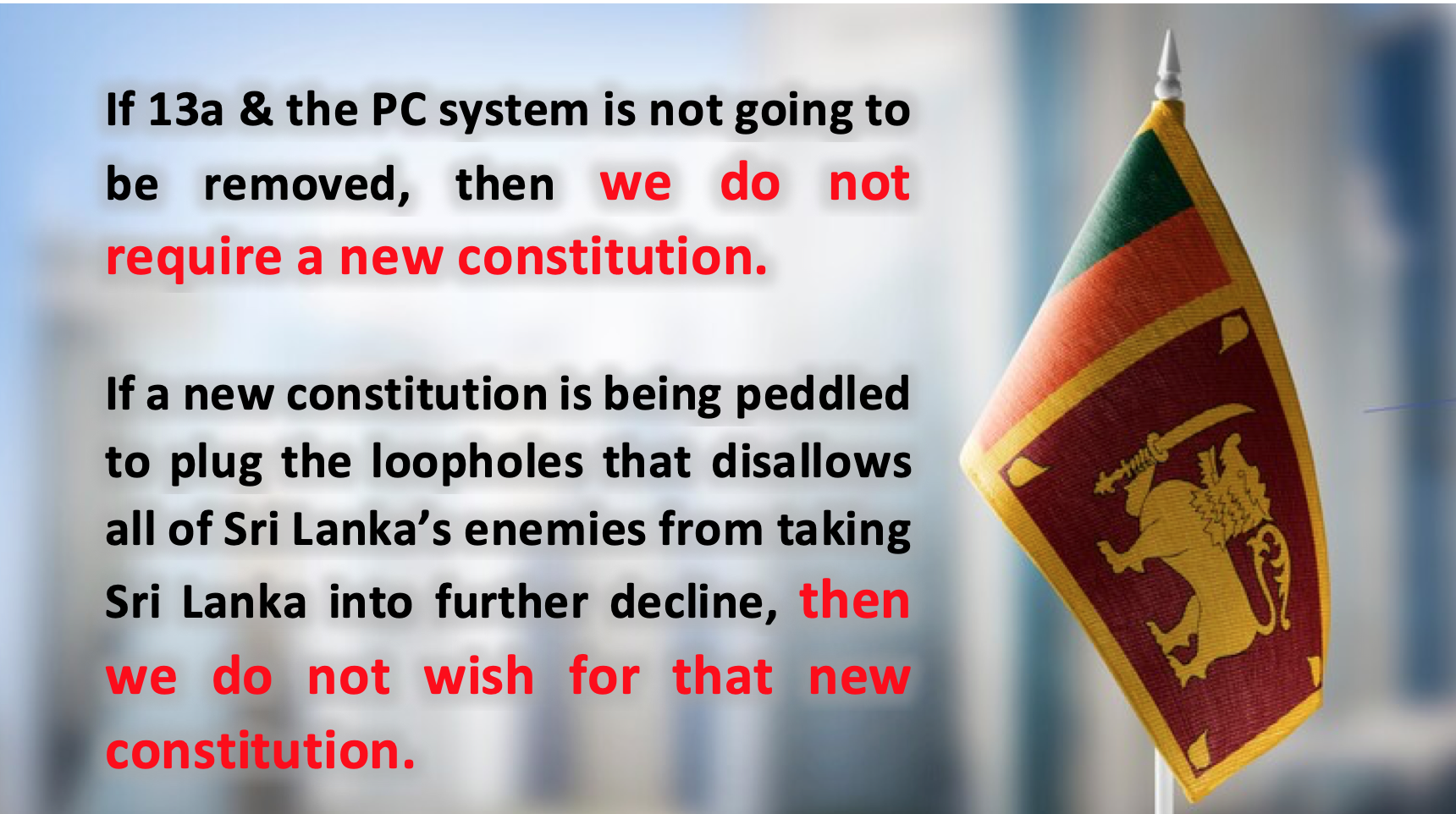 It is no secret that one of the key impediments to Sri Lanka’s ability to function as an ‘independent’ & ‘sovereign’ nation is no one else but India. There is not an area that India has not influenced & put pressure on Sri Lanka. It is no different to the pressures suffered by India’s other neighbors. Knowing the pressures exerted by India, a government elected by the people should devise ways of reducing these pressures instead of encouraging them. In such a scenario, when calls by the general public to annul the provincial councils is ignored, we see no reason for a new constitution if we are to continue PC system in the new constitution. There is no requirement to hold PC elections if we are not going to continue it in the new constitution. Thankfully, the present provincial council system incorporated into the constitution in 1987 has failed to give the land & police powers that India demands through its Sri Lankan proxies to fulfil its greater Tamil Nadu quest bringing North under India’s sphere of influence. Demand for re-merger of NE is to bag Trinco Port.

We do not need to continuously remind Sri Lanka’s policy makers & advisors that with India joining Quad, together with the current court proceedings pushed by Sri Lanka’s so-called Indian friend, demands India’s right to Sri Lanka’s territorial waters. This aligns to the eccentric wisdom of our backdoor PM who wants to build a bridge joining the two nations. It also aligns with the US corporate goal to join two key ports of Sri Lanka via an electric train securing this land right for 100 years. Readers will recall the manner India has incrementally secured distribution of petroleum rights across Sri Lanka to also include operating an economic zone in Trinco & also given Trinco Oil Tanks. These areas now secured by India are declared exclusive zones where even Sri Lanka’s military cannot enter without permission. Having immediately secured this, India next uses its local proxies to demand merger of the North & East (part of the Indo-Lanka Accord & 13a) which also aligns with the US maneuvers in the East of Sri Lanka which increased since the yahapalana government with many US ships arriving & Sri Lanka’s navy put through numerous training programs all preparing our forces for a different mindset. All these take place with a plan & questions Sri Lanka’s plans to counter them & not simply walk into these traps taking place openly & with impunity. An appreciation of the ground scenarios should make Sri Lanka’s policy makers & military strategists worried.

What is the sole reason for doing away with the present constitution? To remove all of the clauses that have not served the nation or its people.

We identify the 13thamendment as key impediment in terms of India’s ability to exert influence over Sri Lanka, the possibility of it being used to separate Sri Lanka & the likelihood of a future terrorist hotspot (taking lessons from the past) Additionally, the provincial council system that was introduced alongside the 13a has been nothing but a worthless & costly system providing little or no relief to the tax paying masses. The work of the PCs can easily be done by the Urban Councils & Municipalities. Therefore, if a government desires to cut its expenses & bring greater relief to the people, a government should remove the PC system instead of continuing it just to please India. That India demands its continuance is clearly seen by the manner it plugs the continuance of the PC system & 13a to the loan conditions it gives. Knowing how India functions, what is the response of the politicians to these unfair demands infringing on our sovereignty?

We have argued that the Indo-Lanka Accord is no longer valid as India did not uphold its end of the assurances given. Moreover, 13a was never part of the Indo-Lanka Accord. There is no line in the Accord that states 13a or Provincial Council system. The 13a, the PC system & the merger of the North & East were all birthed by India & not Sri Lanka’s Tamil leadership or LTTE

This is clearly evident in a letter 3 Tamil leaders sent to the Indian PM. It is also noteworthy that TULF had been negotiating with GoSL through the Govt of India on a devolution program since 1983. All these had been taking place in secret & without the knowledge of the Sri Lankan public. Noteworthy too is that the draft 13a & PC legislation had been gazetted without making available to India. This means, if Sri Lanka can gazette 13a & PC Bill without showing India, Sri Lanka should also be able to remove 13a & PCs without informing India.If Sri Lanka could suspend India’s role in talks in January 1986 – why can’t politicians take similar decisions now?

Sri Lanka’s advisors have always followed a policy of fear regarding relations with India “we cannot anger India”. It is as a result of following a ‘fear of India’ policy that India deems it their right to tread on Sri Lanka as it sees fit. Do we need to elect leaders if they agree to do anything that India orders them to? As per TULF 1987 letter, India exerted pressure on President JRJ to agree to the unification of North-East & to create one PC, one governor, one chief minister & a board of ministers. One key area which we continue to ignore & which our legal luminaries pretend to be deaf, dumb & blind about is that it was required to have a referendum to decide on the continuance of the merger in Eastern province by 31 December 1988 which had been postponed & was never held. This clearly means the merger was an impermanent arrangement. But it was only in 2006 that the N-E was legally demerged after a petition.

TULF & GoSL held discussions on devolving provincial subjects as far back as July/Aug 1986. If this was done without India’s direct involvement, Sri Lanka’s government should be able to take bold decisions even though India blows hot or cold. As per TULF the 13a Bill & PC Bill retains power for Parliament to amend or repeal chapter pertaining to PCs, lists of subjects & power of Parliament to legislate subjects transferred to PCs by a 2/3 majority. If the JRJ govt could ensure the subject of Ports in particular Trincomalee Port was included to Reserved List & under Central Govt control, why are successive governments bargaining with Trinco?

India has been riding on the bogus “concern for Tamils’ as a means to exert influence over Sri Lanka. The inclusion of Tamil as an official language with the 13a was not out of any love for Tamils but a pawn for India to use. India could have eliminated LTTE immediately after the assassination of Rajiv Gandhi, but it chose not to do so.

Let it also not be forgotten that it was the TULF that as far back as December 1985 that called for the merging of North & East & one Tamil linguistic state & not the LTTE. Noteworthy too is the manner Tamil political parties are promoting insertion of “UNITED” instead of “UNITARY” primarily because it is a term associated with confederation/confederacy & not an unitary state. Presently too, there are many efforts to replace UNITARY with UNITED.

It is clear that India is able to armtwist GOSL into agreeing to its wishes whatever Sri Lanka’s public demands to the contrary. The GoSL even agreed to devolution of power (within unitary framework) to PCs in May/June 1986 but without merging north & east. How did the merger take place then? Either GoSL representatives & advisors are not reading the documents they are being given as drafts or they recommend the leaders to sign knowing but ignoring the dangers at hand.

What we need to understand is that India has been manipulating not just Tamil political parties, the LTTE & other Tamil militant group but the GoSL/the Opposition as well as a plethora of others openly & freely in Sri Lanka.The dangers of this can be seen in the manner that these “toys” are being manipulated for India’s political advantage. India will place these toys in one basket when necessary or have them fight each other where necessary too. We become mere spectators. However, looking back from the 1980s all that can be said is that India has made inroads into Sri Lanka with each coming year. There is no denying India played a key role in Tamil militancy & a big question mark remains regarding India’s role in Easter Sunday too. The tall & short of this is the manner Sri Lanka has been weakened & made vulnerable by our own.

There is little point in ushering a new constitution if we are not going to throw out the elements that make Sri Lanka vulnerable.

If 13a & the PC system is not going to be removed, then we do not require a new constitution.

If a new constitution is being peddled to plug the loopholes that disallows all of Sri Lanka’s enemies from taking Sri Lanka into further decline, then we do not wish for that new constitution.

Since 1987, we have only had ‘demands to fully implement 13a’ but we have managed to weather these demands with the present constitution – thus it is not half as dangerous as a new constitution that may see our enemies influence what gets included & what doesn’t – from the manner India exerted pressure upon Nepal when it was told to change its constitution by the West should be a good example for Sri Lanka not to knowingly walk into traps.

There are more important & pressing things to do than changing constitutions. The leaders of this country must realize & prioritize.