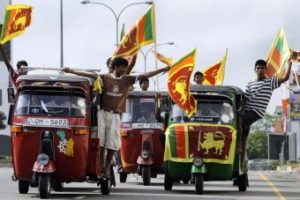 Conflict was NOT BETWEEN Sinhalese & Tamils.

Sri Lankan Army are NOT SINHALESE.

Sri Lanka Army DOES NOT NEED TO RECONCILE with TERRORISTS.

Tamil leaders are continuing to demand what LTTE terrorists demanded

GOSL must take legal action against separatism whether by militants or by political maneuvers.

LTTE’s 2nd victim were Tamils – Tamil policemen on duty in North to scare them from joining public service. If Tamils didn’t join public service it was because of repercussions they would suffer by LTTE for joining.

LTTE also killed TAMILS going against them including their own fighters.

Has UN totaled the number of Tamils killed by LTTE?

JULY 1983 Riots is presented as “ETHNIC” but in reality the UNP Govt & their stooges (comprising thugs who were Sinhalese, Muslims & Tamils) attacked selected Tamil houses & began to loot them)

Houses of UNP Tamil friends were given protection. Sinhalese safeguarded Tamil neighbors & friends in their homes. But the media & UNP Govt had manufactured the story as ‘ETHNIC’ for it justified LTTE to come into the open from hiding.

UN entities tasked to protect children never called for global action against LTTE for denying Tamil children the right to be with parents, right to study, right to live in a safe environment.

UN/Western Govts continue to do nothing against the woman (Adele Balasingham) who not only trained Tamil children to kill but instructed them to bite cyanide capsule & commit suicide. Inspite of complaints logged with the UK Metropolitan police no action or even an investigation has been launched against her though LTTE remains banned even 10 years after LTTE defeat.

Countries that have banned LTTE continue to allow LTTE fronts to openly operate in them. In April 2014 – 16 organizations were declared LTTE fronts by the GOSL – no foreign govt initiated investigation into the organizations named that were operating from their countries. WHY – all of these entities were linked to entities that the Western Govts banned like TRO? However, foreign govts are even allowing their Parliaments to be used as venues for these banned entities to hold their functions and watching their MPs attend these functions and even give speeches – Jeremy Corbyn even attended!

Sri Lanka’s military offensive would not have taken place if not for LTTE making its greatest blunder to close the Mavil Aru anicut & deny water to farmers of the East.

Any issues these entities had should have been brought to the table at these bi-weekly meetings and sought explanations from the GOSL. The meetings divulged details of food, medicines, sent to the conflict areas by the Govt. If there were shortcomings, these entities should have questioned the GOSL during these meetings.

Food convoys were sent with knowledge of ICRC, WFP and others. No one can ignore that Sri Lanka was sending provisions while engaged in a military operation inspite of knowing LTTE was keeping Tamils as hostages/human shields and were storing these essentials to distribute amongst LTTE family members as well as store for their use.

There are only allegations against Sri Lanka Armed Forces killing ‘Tamil civilians’ but even after 10 years there are no names or skeletons to prove the dead figures alleged.

How many Tamils got shot dead by LTTE who shot at their own people to prevent them fleeing?

Can UN give a number?

How many Tamils did LTTE kill?

That Sri Lanka Armed Forces accepted civilian clothing clad LTTE combatants who surrendered is a testament that none were harmed during surrender. All were put into rehabilitation.

All of the child soldiers that surrendered were given Presidential Pardon – given education, returned to families and assisted in their future development by the GoSL and Armed Forces. Gokulan a child soldier went on to become a singing sensation loved by all. GoSL and not LTTE or international community gave these child soldiers a new lease on life.

Whose side was TNA on?

Whose side was LTTE fronts on?

TNA throughout the military offensive took side of the LTTE

TNA did not demand release of Tamils from LTTE.

LTTE fronts did not send any humanitarian relief to Tamil civilians.

Contrary to the negative publicity given. Every IDP centre had female soldiers, soldiers competent in speaking Tamils and given the scale of the humanitarian operation Sri Lankan Armed Forces & GoSL did their best to provide far more comforts than LTTE had given them while they were in LTTE custody.

A terrorist movement that crippled the country’s economy, peace, prosperity was defeated.

The relief to 20m people mattered far more than the disappointment to LTTE supporters & LTTE combatants.

In 2004 Janes Intelligence declared LTTE annual profits to be $300million from its illegal and legal international operations.

With LTTE’s illegal and legal international network in tact, that annual profits must now be doubled given the saving from expenses earlier incurred for LTTE combatants, their food, clothing, medicines, arms & ammunition procurement etc.

Why is the international community not taking steps to cripple LTTE illegal operations even 10 years after LTTE defeat?

LTTE fronts operates TV stations, radio stations, websites, funds political campaigns, politicians, holds international conferences to which international personalities are paid to deliver speeches and paid for travel & other expenses, pays for demonstrations and even sponsors large groups to travel overseas to demonstrate on behalf of LTTE & separatist goal. LTTE kitty also is able to retain the best of lawyers for a fee in a world where integrity of profession bows to lucrative fees even if paid by internationally banned terrorist groups. Such is the reality of the world we live in. We have to wonder how much of LTTE money has contributed to the bias against Sri Lanka too.

We can however to negate this false notion prove with examples the positions held by Tamils & Muslims in Govt and Private Sector.

Allegations of 3 riots in 1958/1977/1983 have often been cited as grounds to showcase ‘ethnic’ element to Sri Lanka’s conflict. However, the role of Tamils in inciting these riots has often been left out. Of the 3 riots, 2 have been directly politically motivated by UNP.

Why is everyone ignoring how Sinhalese & Muslims were chased out of the North in the 1980s after which only the demand that North belonged to ONLY TAMILS started.

In making allegations against Sri Lanka’s Armed Forces can the UN, UNHRC or any international body confirm who the dead are?

How many LTTE in uniform died during the final phase of Sri Lanka’s conflict?

How many LTTE in civilian clothing died during the final phase?

How many Tamil civilians in civilian clothing took part in hostilities & died?

How many Tamil civilians in civilian clothing without taking part in hostilities died from LTTE firing?

How many Tamil civilians in civilian clothing without taking part in hostilities died from Sri Lanka Army firing?

Without knowing these details – UN/UNHRC CANNOT make any allegations against Sri Lanka.

No conflict is without some form of irregularities. No soldier has time to be reading rule of war books while engaged in hostilities with non-state armed actors who are not bound by rules of war and whose notoriety comes from breaking the rules of war.

A soldier is himself a human being and must defend his own life.

Ceasefire Agreement violations accounted for over 3000 violations against LTTE – what did the international mediators do against this?

There cannot be restorative justice for LTTE armed non-state actors and retributive justice for the National Army who was only doing its national duty to defend/safeguard the nation & its citizens.

3 days after conclusion of the conflict the UNSG arrived in Sri Lanka & the delegation was taken on a helicopter tour of the final conflict area. If there had been newly dug mass graves they would have been the first to view from an aerial view. No newly dug mass graves were reported by any of them. US satellite pictures could also not find mass graves to hold minimum 40,000 dead bodies (which were not in skeleton form)

Has no expert thought of how 40,000 dead bodies can be dumped and no one can even find these supposed to be dead even after 10 years?

What has the UN or UNHRC or Missing Persons Commission done about the 5000 Missing Soldiers all of whom have names and IDs? Instead of going after figures that cannot be corroborated with names & IDs, why is no one finding what happened to 5000 missing Sri Lankan soldiers?

Who are making allegations against Sri Lanka’s National Army?

All of the allegations based on which UNHRC Resolutions/Investigations have been launched have been by 3rd party or 4th parties or LTTE connected individuals/organizations. The foreign parties making allegations are also regular attendees to LTTE front events. Foreign MPs making allegations are dependent on Tamil vote bank and Tamil funding for their political campaigns. These constitute conflict of interest.

The 3-member panel appointed by UNSG was on a private capacity. None of the members of the panel were from UN. The report was not tabled in UNSC or UNGA. This was the first time a private report was called AFTER the conclusion of a conflict. The private nature of the report being used as a basis for successive resolutions against Sri Lanka must be answered by the UNHRC & Sri Lanka must seek official explanation in 2020 Geneva.

17 nations led by Germany sought a special session in UNHRC to discuss whether GoSL committed crimes during the last phase of the war. Were these countries sleeping when LTTE were killing innocent people. Why did they not call for any special session then?

However, a counter resolution was passed on 27 May 2009 with 29 countries supporting Sri Lanka.

2014 Resolution 25/1 authorized investigation by UNHRC (OISL) which ended in March 2015. Has UNHRC followed due process. If there are procedural lapses Sri Lanka must take these up in Geneva 2020. Procedural lapses if ignored will cause precedents that will impact & affect other countries too.

A procedural complaint petition has been filed in the UN questioning violation by UNHRC interfering into the internal affairs of a sovereign nation.

Sri Lanka’s government following West sponsored regime change co-sponsored the 30/1 Resolution in September 2015 against the citizens wish and without the knowledge of Parliament or President.

While US called UNHRC a ‘cesspool of political bias’ Israel too declared that wordings of resolutions by UNHRC indicate purpose of investigation as not intended to arrive at truth but to impair a country’s self-defense and demonize it. This is exactly what Sri Lankans feel about UNHRC’s policy on Sri Lanka.

6 reports were compiled responding to the allegations made by OISL & led by late Sir Desmond de Silva. These reports concluded that the Sri Lanka Armed Forces did not commit war crimes as was alleged.

These reports must be tabled again in Geneva 2020.