Lt. Col. Lawrence Smith was the US Defense Attache to the US embassy in Colombo during the conflict. Lt. Col. Anthony Gash was the UK Defense Attache to the UK High Commission in Colombo during the conflict. Both were privy to top level information which they passed on to their respective governments. Their info and their observations are to be taken far more seriously than the 3rd& 4thparty LTTE linked data that UNHRC is using against Sri Lanka. The defense attache’s of both governments have effectively quelled 2 of the most serious allegations against Sri Lanka – alleged killing of surrendered and bogus figures of dead. It is the allegation of killing that constitutes the allegation of war crimes against the Sri Lanka Armed Forces fast forwarding resolutions and punitive actions. However, if such crimes were not committed, what is the UNHRC up to? This is what Sri Lanka’s defense team via the foreign ministry must be presenting. Prove your case with facts and not fairytales.

Lt. Col. Lawrence Smith’s comments made at the Sri Lanka Defense Seminar in May 2011 (whether it is his own opinion or that of the US Govt) is irrelevant, as the statement is generated by the documents in his hands while holding the portfolio as US Defense Attache to the US Embassy in Colombo. Thus, his comments clearly negates the white flag surrender fairy tales. 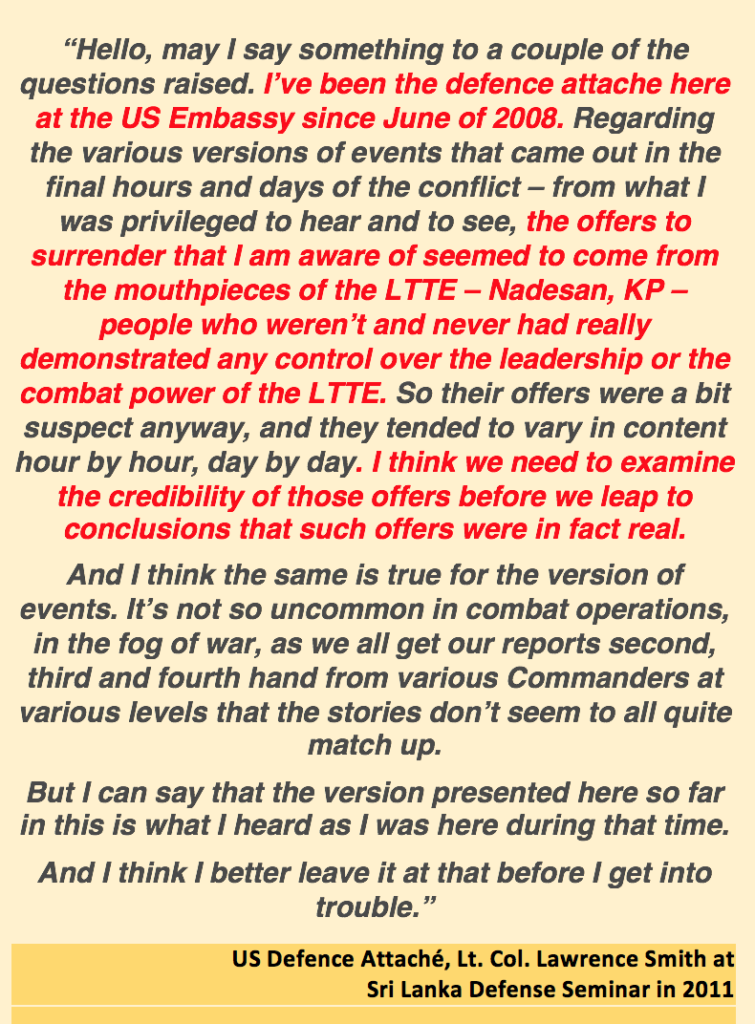 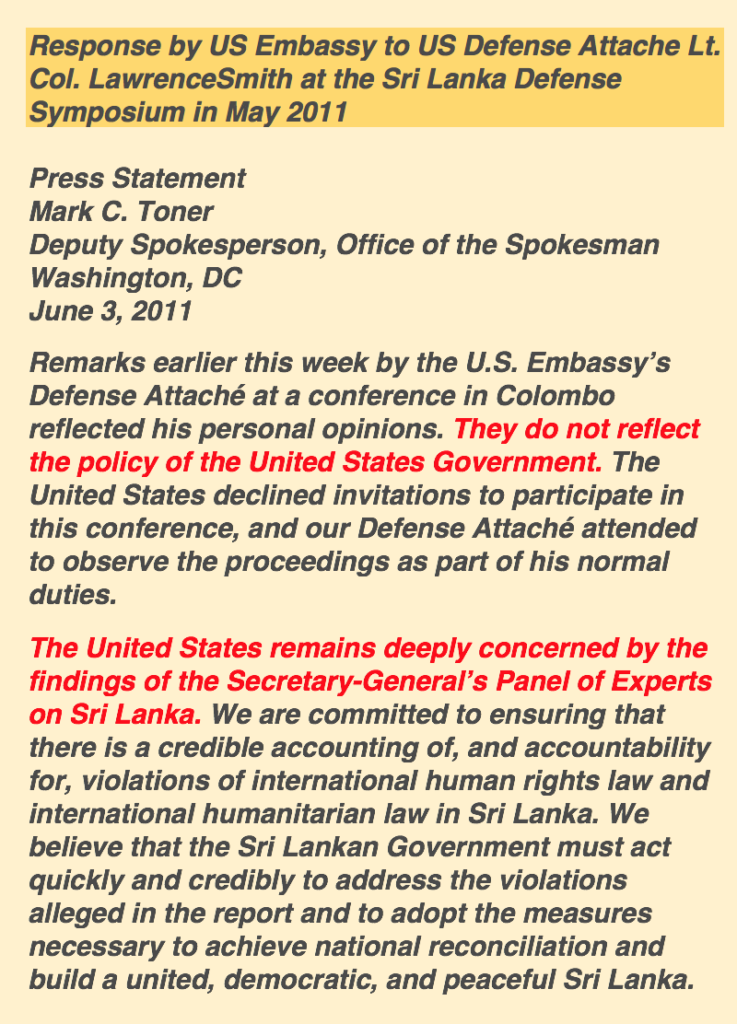 How silly of the US to downplay comments made by its own military attache who is obviously quoting from the same report that he sends to his Govt!

The UK defense attache Lt. Colonel Anthony Gash’sdespatches from January to May 2009 also demolishes a key allegation of killing 40,000 civilians which is the single basis to declare Sri Lanka’s Armed Forces as war criminals.

His reports were classified by UK Govt as ‘secret’

Sri Lanka must also be grateful to Lord Naseby who is taking a principled stand to fight the truth on facts.

Lord Naseby challenged the classification of Gash’s reports as ‘secret’ via the UK Freedom of Information Act 2000 and spent 3 years doing so.

Lord Naseby was given 39 pages of heavily blackened report.

What was readable clearly proved 40,000 deaths did not take place.

Lord Naseby has been doing what Sri Lanka’s Foreign Minister/Secretary and all those tasked to represent and defend Sri Lanka have been too lethargic to do. Digging for ways to prove the false allegations against Sri Lanka was what mattered and Lord Naseby stood to the defense of Truth.

Lord Naseby declared the contents of the despatches to the House of Lords on 12 October 2017. 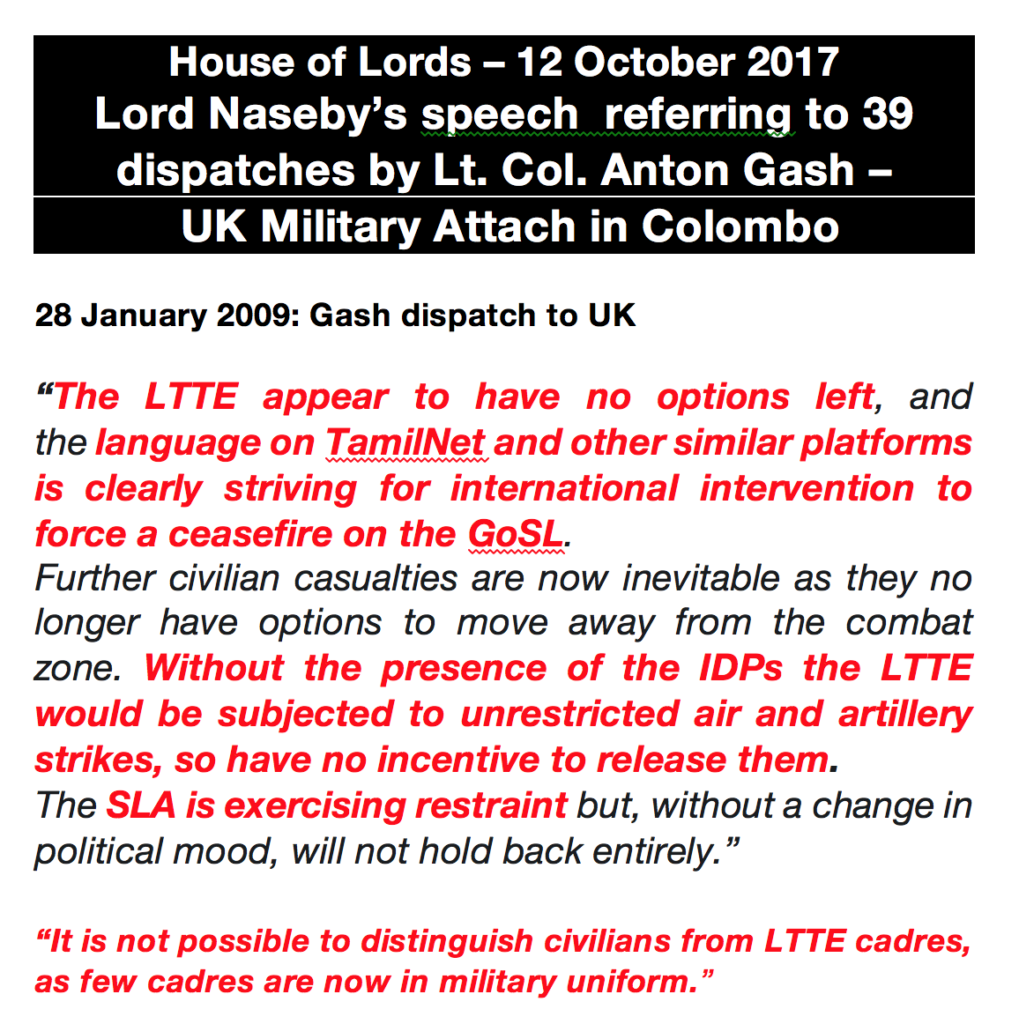 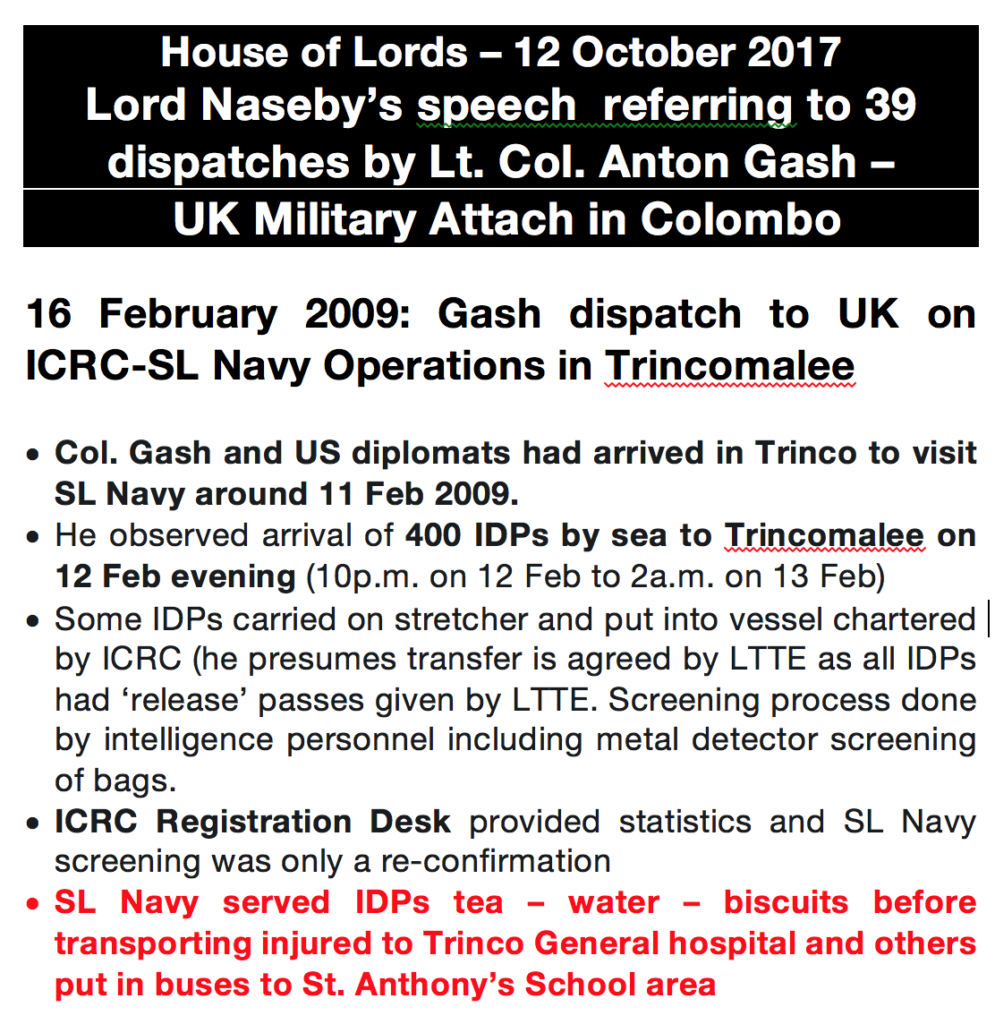 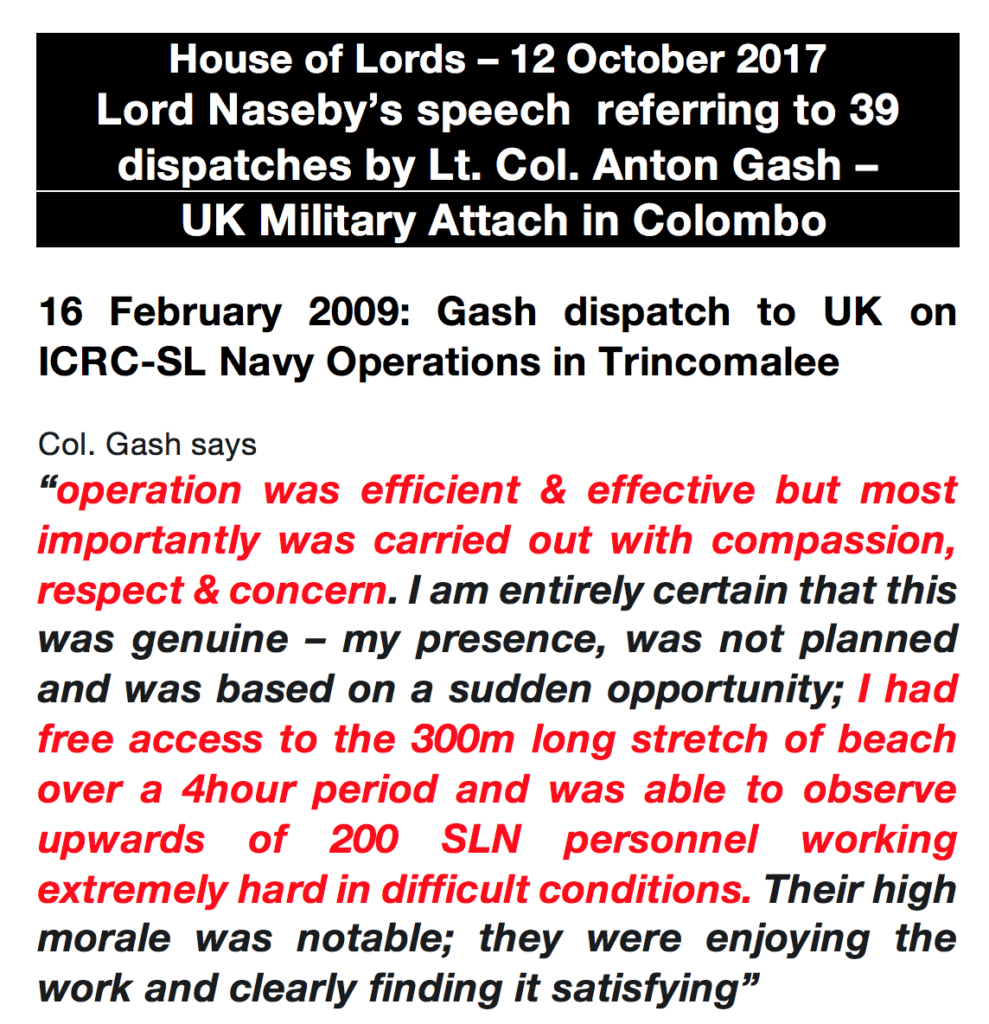 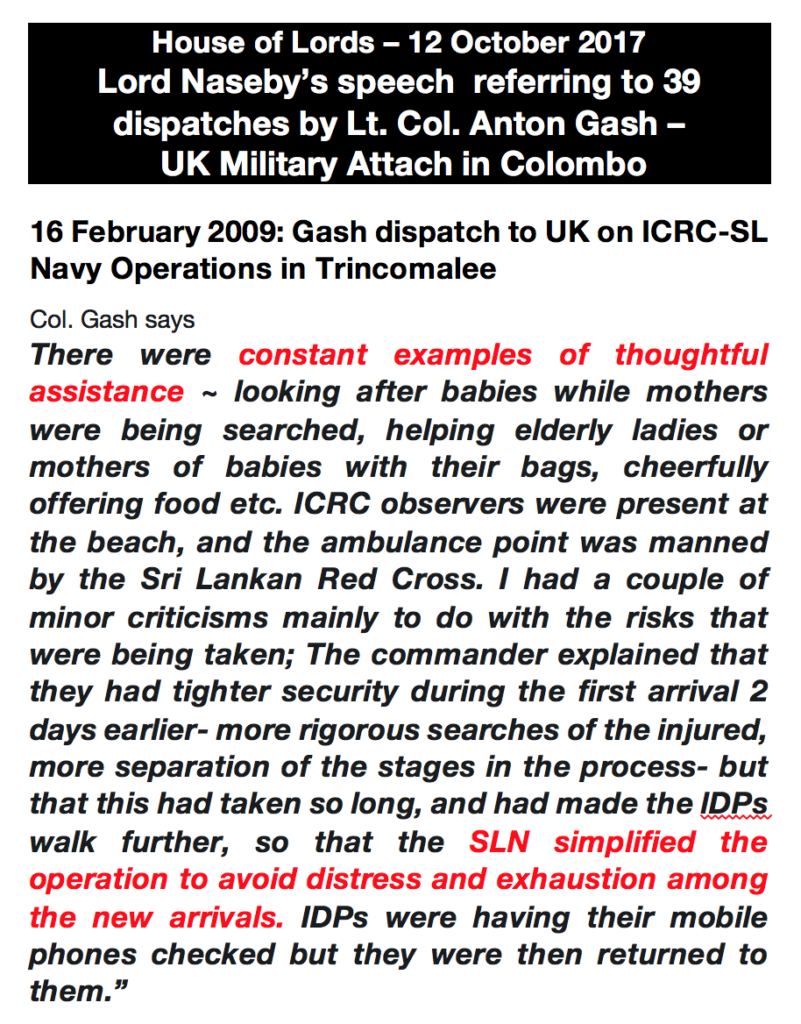 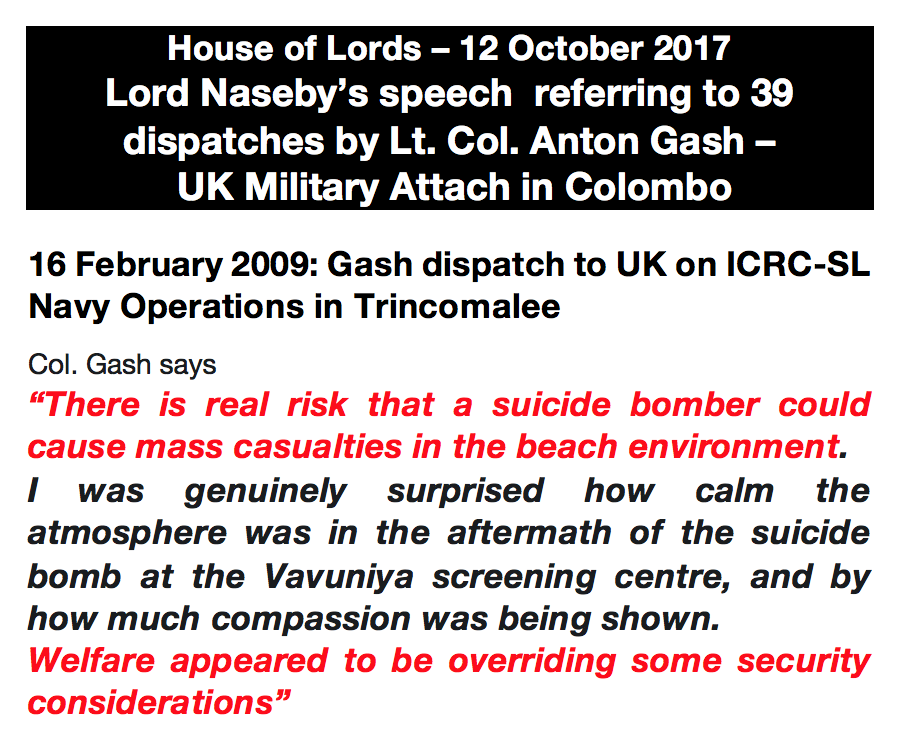 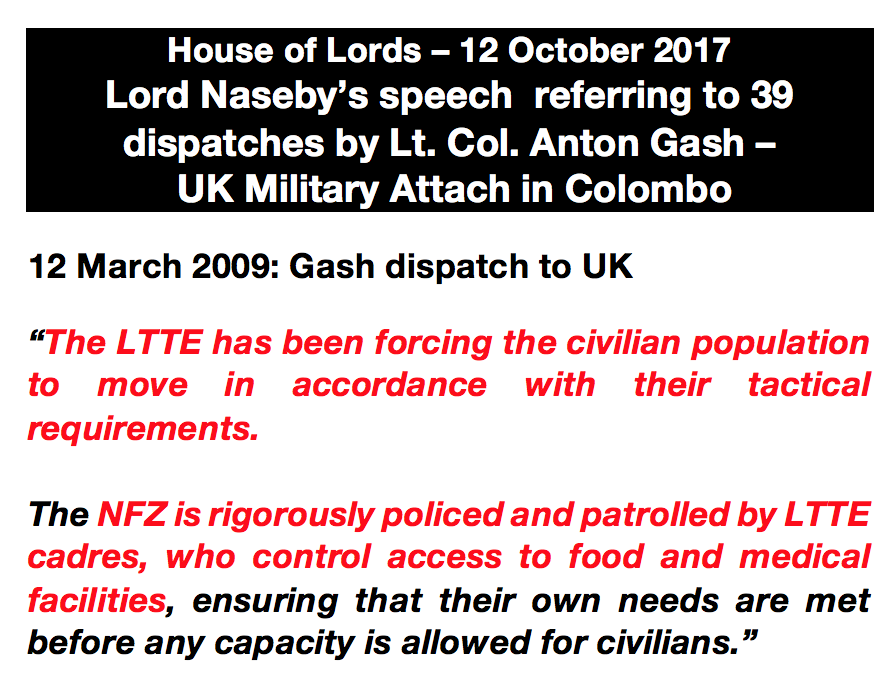 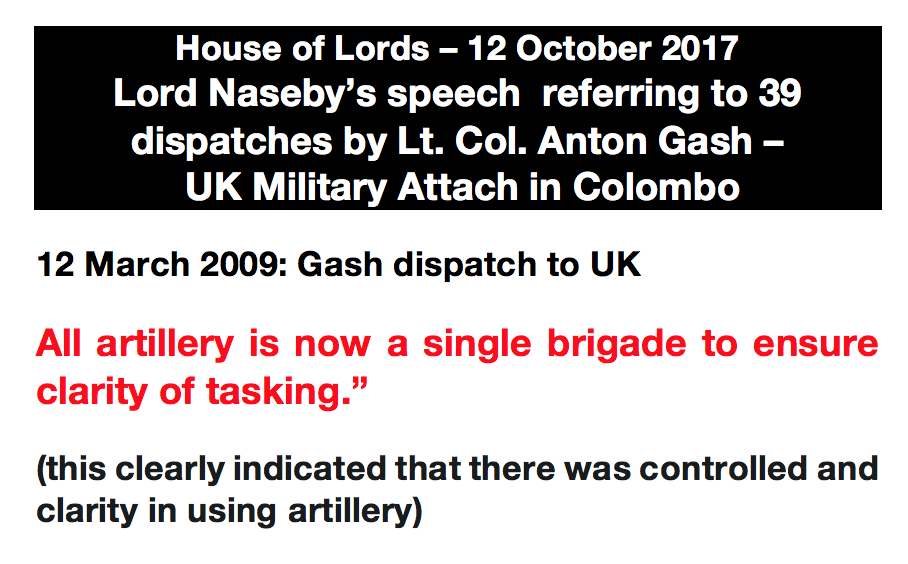 Lt. Col. Gash’s reports to the UK reveal facts too true to chew. 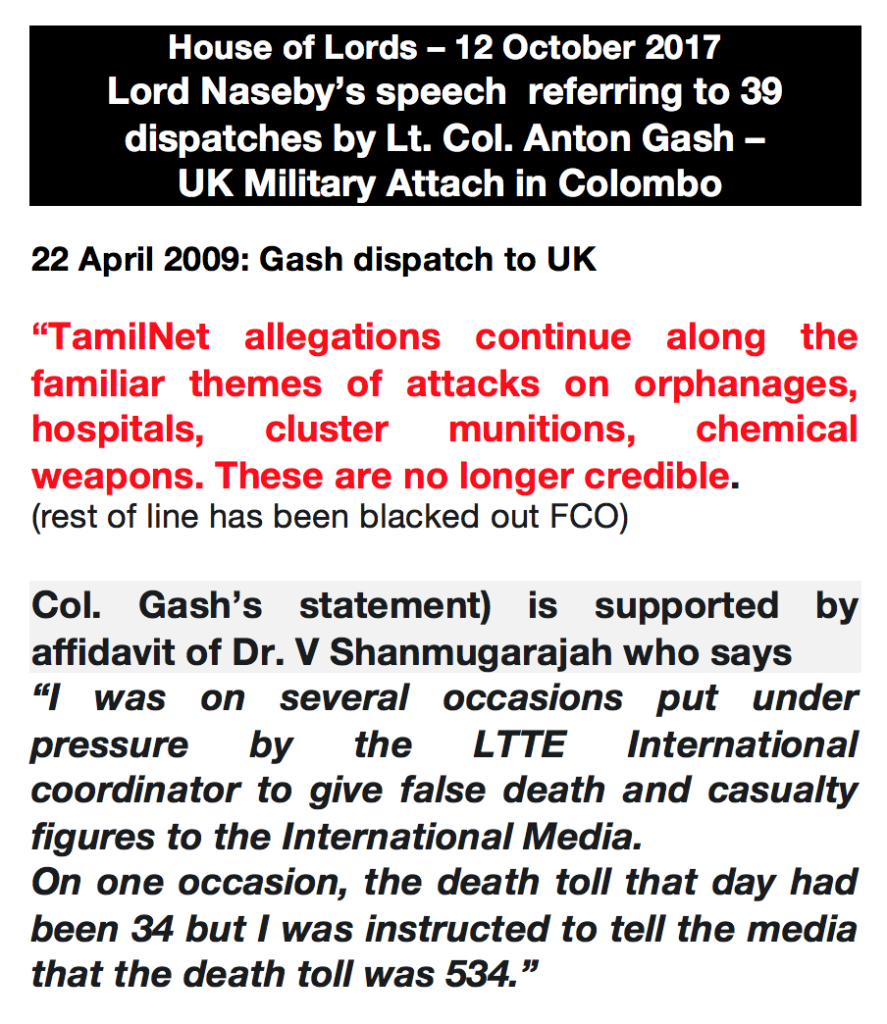 What is clear is that both the defense attache’s of the US and UK foreign missions in Colombo were pretty certain that no foul play took place.

Thus, it is pathetic for UNHRC to claim so an demand war crimes tribunals and hybrid courts.

So far its been 12years and even with a Missing Persons mechanism set up – the UNHRC cannot produce 40,000 names of the dead or even missing. This showcases what a farce the allegation is.

The sealing of witnesses for 20 years is a super ploy to ensure lies and liars are kept hidden for 20 years after which the damage is done. We can recall how Milosevic was exonerated from war crimes charges 14 years after his death having been put to prison on bogus charges. We do not wish to see the same happening to our war heroes by the same warped minds handling these kangaroo courts in the UN. How many tribunals an Truth Commissions have they held and what is the gain they have secured from these except providing themselves employment!

We have a clear case of bias and hypocrisy at play in Sri Lanka’s conflict. The very nations that supported LTTE are attempting to put Sri Lanka on trial completely ignoring their role in helping terror. They continue to do so by allowing LTTE diaspora to operate in their countries.

When the Tamils living in Sri Lanka wish to move on with  life, the LTTE Diaspora and their Western stooges together with India want the opposite.

When even LTTE combatants who have lost their childhood, lost parts of their bodies, lost opportunity to become somebody in life, the LTTE diaspora and their Western stooges together with India want to create more troubles.

It is time the people of Sri Lanka realize the larger picture.