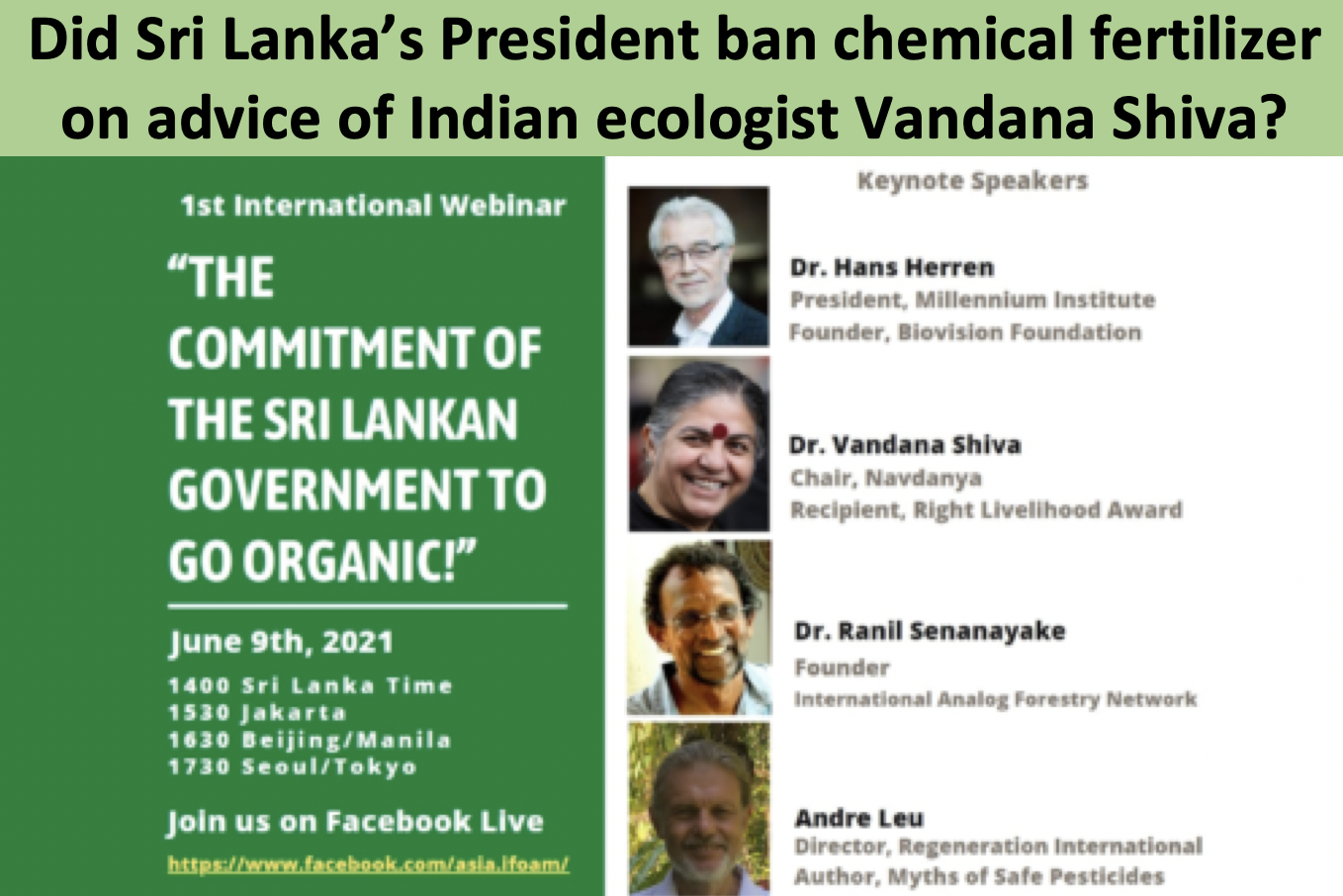 In April 2021, Sri Lanka’s President Gotabaya Rajapakse banned chemical fertilizer. The decision was sudden & no one really knew who advised the President. It now emerges that the President was advised by none other than Indian ecologist Vandana Shiva. As a result paddy crop failed resulting in retail price of rice increasing by 30% and tea production falling by 40%. However, anyone can give advice, but it has to be taken pragmatically. Nevertheless, we must wonder if this was part of the political & economic collapse of Sri Lanka. Therefore not just the President but all those that nodded their heads & gave a thumbs to the ban up must be held accountable. The decision was far more than stopping use of chemicals in one’s home garden. Who introduced Vandana Shiva & her organization Navdanya International to the President?

Vandana Shiva hailed the decision by President Gotabaya Rajapakse in her website.

On 11 April 2022 Dr. Monica Verma of the South Asian University writing to an online journal alludes to President Rajapakse’s election manifesto that outlined the transition to organic farming across 10 years. Therefore, it was a shock to many why in April 2021 he would announce a total ban on the import of chemical fertilizers & agrochemicals. While one of the reasons to ban imports was Sri Lanka’s forex situation, the blanket ban resulted in farmer protests primarily from lack of preparedness by parties concerned & price increases. Eventually by November 2021 the ban had to be revoked.

In June 2022 Soumya Bhowmick from the Observer Research Foundation too alleges Vandana Shiva to be the architect of the agri-fiasco in Sri Lanka causing the political and economic collapse of Sri Lanka.

In November 2021, the ban was lifted following the backlash from the industry due to reduced productivity, soaring inflation, and therefore continuous protests to abandon the policy. Despite this step, the country experienced a sharp increase in prices for all commodities, as farmers were unable to access imported fertiliser due to dwindling forex reserves.

China has been unfairly blamed for the ‘debt-trap’ in a much hyped global propaganda with even renowned economists joining in the fray when in reality China only holds only 10% of Sri Lanka’s debt. By the time this realization comes home, citizens of Sri Lanka have been made to believe China is to blame.

The primary reason for Sri Lankan citizens to fall prey to misinformation & disinformation is their own inability or lethargy to find out for themselves where things went wrong, why, how & who are responsible instead of simply accepting floating stories that are often with manipulative intentions in mind.

The whole country blamed the President believing it to be his sole decision, however, it emerges that it is the advice given by a renowned ecologist. Was it deliberate and part of the overall plan to destabilize Sri Lanka politically & economically is anyone’s guess but what is clear is that successive issues and debacles converged together to bring about the downfall – how far these were planned, by whom and why is for us to find out.

A lesson for all leaders is to take advice by correct advisors but never really only on their advice but to even take several advice and thereafter take an informed decision after balancing the pros and cons and charting out how to deal with these pros & cons too.