1987 Indo-Lanka Accord says NOTHING about Devolution or 13th amendment

The Indo-Lanka Accord was signed on 29 July 1987 in Colombo under emergency while the 13thAmendment to Sri Lanka’s constitution was passed on 14 November 1987. Does the Indo-Lanka Accord mention, amending Sri Lanka’s Constitution? No.Does the text of the Indo-Lanka Accord have even the mention of ‘devolution’? No.There is no mention of constitutional amendment or devolution even in the exchange of letters between President J R Jayawardena or PM Rajiv Gandhi. More importantly, the Accord and the letters only mention North & East provinces & a system for these two provinces only.Then what is this hullabaloo related to India insisting on implementing 13thamendment? As far as Sri Lanka is concerned it is a domestically passed legislation and whether it continues or not is the decision of the People voiced through their representatives in Legislature & the Executive. The 2002 Cease Fire Agreement was brokered by Norway, but when Sri Lanka declared its withdrawal from it, Norway did not demand Sri Lanka continue it, likewise India must first accept Sri Lanka is not a territory of India and if the welfare of Tamils is the concern of India, they can always offer Tamils the right to return to settle down in India.

The quest for separatism politically came prior to the quest via gun.

The political quest for separatism began in 1949 with the formation of ITAK for a Tamil Nation State. Prabakaran was not even born when ITAK was formed in 1949.

Prabakaran did form the Tamil New Tigers in May 1972 at the age of 18 and killed Jaffna Mayor in July 1975. Prabakaran rechristened TNT as LTTE on 5 May 1976 days before the Vaddukoddai Declaration was on 26 May 1976.

The quest for separatism via gun & politically merged into a marriage of convenience.

May 1978 LTTE was banned. 7 September 1978 LTTE blew up an Air Ceylon plane the very day the new constitution was introduced.

India was home to Tamil militant training camps. Jain Commission Report lists the names of these camps. By 1986 close to 3500 had undergone training by Indian intel.The memoirs of former Indian officials and military personnel establishes this.

When secession was launched for self-determination by Tamil Nadu, India was quick to pass 16thamendment in 1963. Why did India support Tamil militancy in Sri Lanka then?

As you can see, it was only after helping create the conflict that India engaged Sri Lanka in discussions to resolve the conflict.

Clearly, we can conclude that the quest for separatism is two-fold (started politically & promoted to warfare) with Indian nod of approval & covert assistance.

Tamil militants were trained in India & dispatched to cause mayhem in Sri Lanka. 1983 was the culmination of a series of attacks and killings & possibly a planned riot to enable justification of armed militancy. It also enabled to internationalize the conflict painting majority Sinhalese as demons discriminating the Tamils. It afforded India to crown itself as savior of Tamils.

Thereafter from 1983 to 1987 Sri Lanka was in for a period of orchestrated turmoil. LTTE opened its London office in 1984. LTTE kills villagers in Kent & Dollar Farm,

The army was fully stretched but on 26 May 1987 launched Vadamarachchi involving 8000 troops from around 30,000. Prabakaran was cornered. Then India ordered to halt operations & not to capture Prabakaran. 2 June 1987 Rajiv Gandhi sent a flotilla by sea which was sent back by the Sri Lankan Navy.On 4 June India violated Sri Lanka’s sovereignty dropping 22 tons of parippu! This constituted a crime of aggression against Sri Lanka by India. Prabakaran was whisked off with family to India by India on 21 July 1987 sending 6 helicopters. The government was brought to its knees.

Indo-Lanka Accord was a Treaty signed under Coercionproved by the ships sent, Sri Lanka’s territorial violation, demand to cease hostilities whereby Prabakaran escaped capture by Sri Lankan forces and India whisked him off to India and kept him there until the Accord was signed, Natwar Singh gave a clear warning of threat if Sri Lanka were to take action against the Indian Airforce who dropped a meager 25tons of parippu on Jaffna giving Sri Lanka just 30 minutes notice – these all violate Article 52 of the Vienna Convention“A treaty is void if its conclusion has been procured by the threat or use of force in violation of the principles of international law embodied in the Charter of the United Nations”. 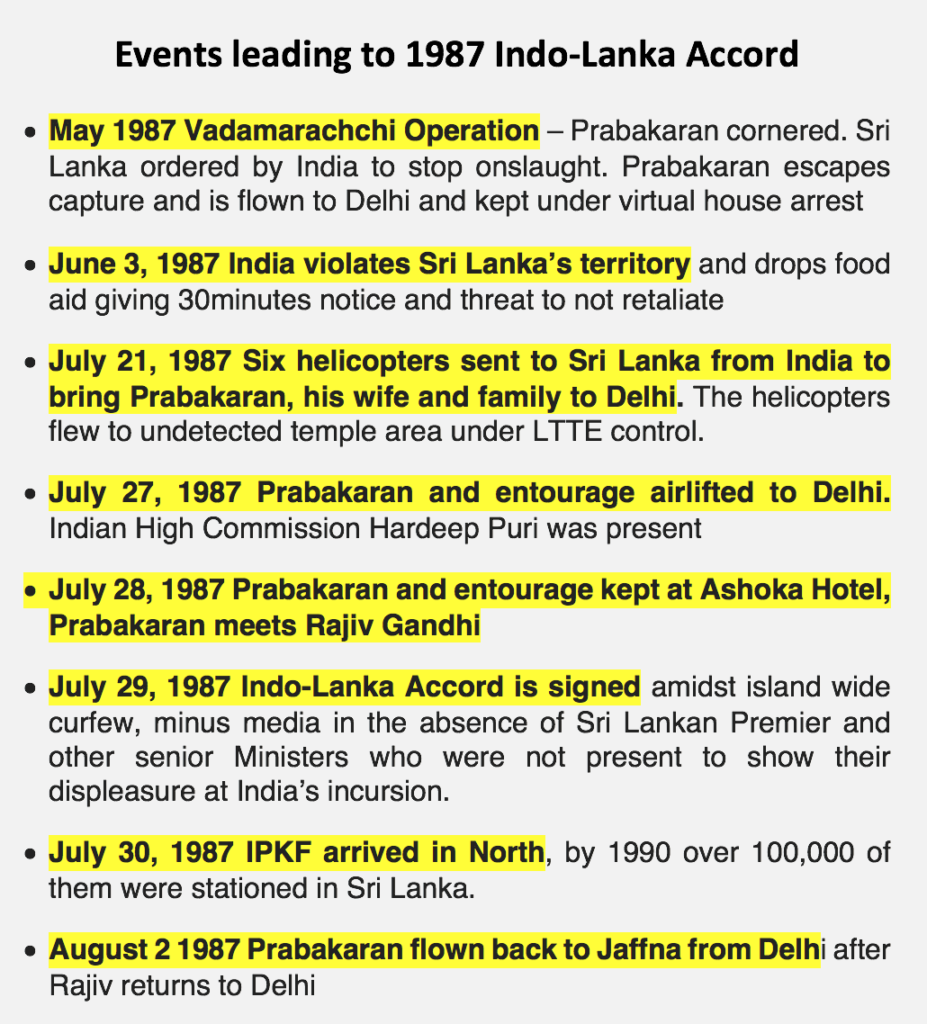 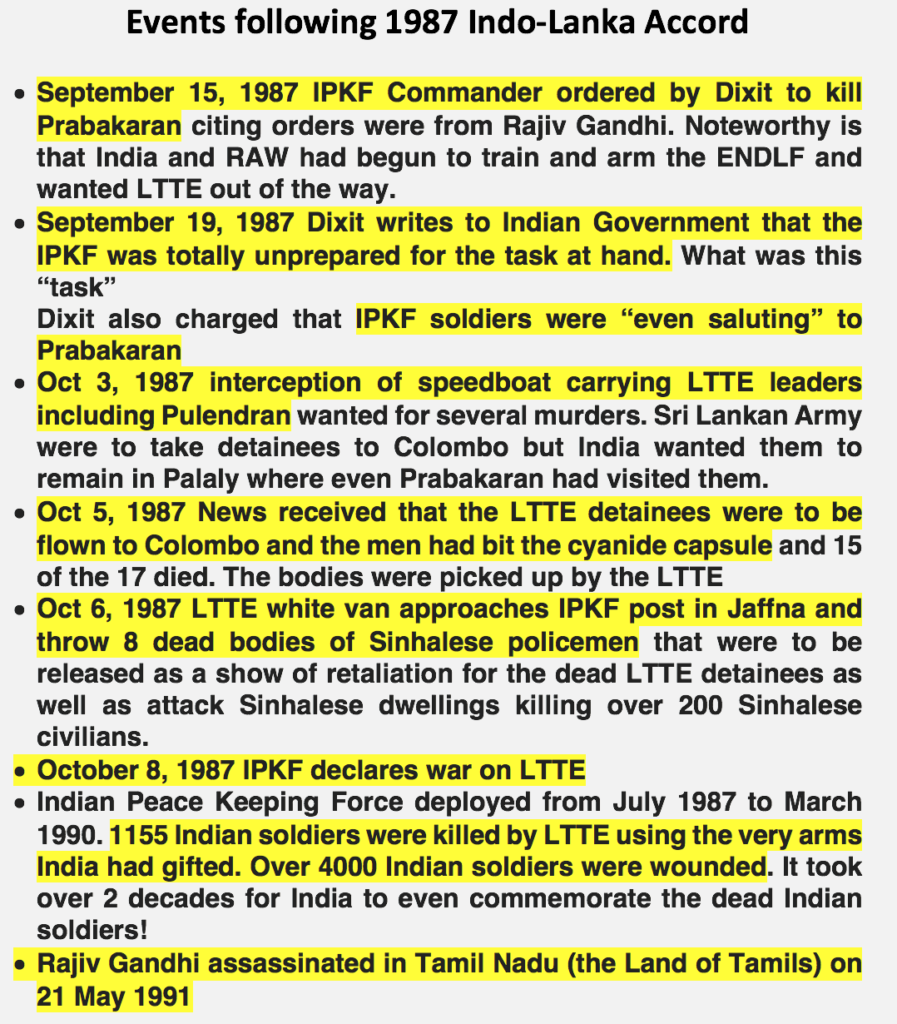 All 5 clauses India committed to – India did not honor. India had clearly violated the principle of international law ‘Pacta Sunt Servanda’ (Pacts are meant to be honored for agreements to be valid) & if not kept Sri Lanka is not obliged to honor it. 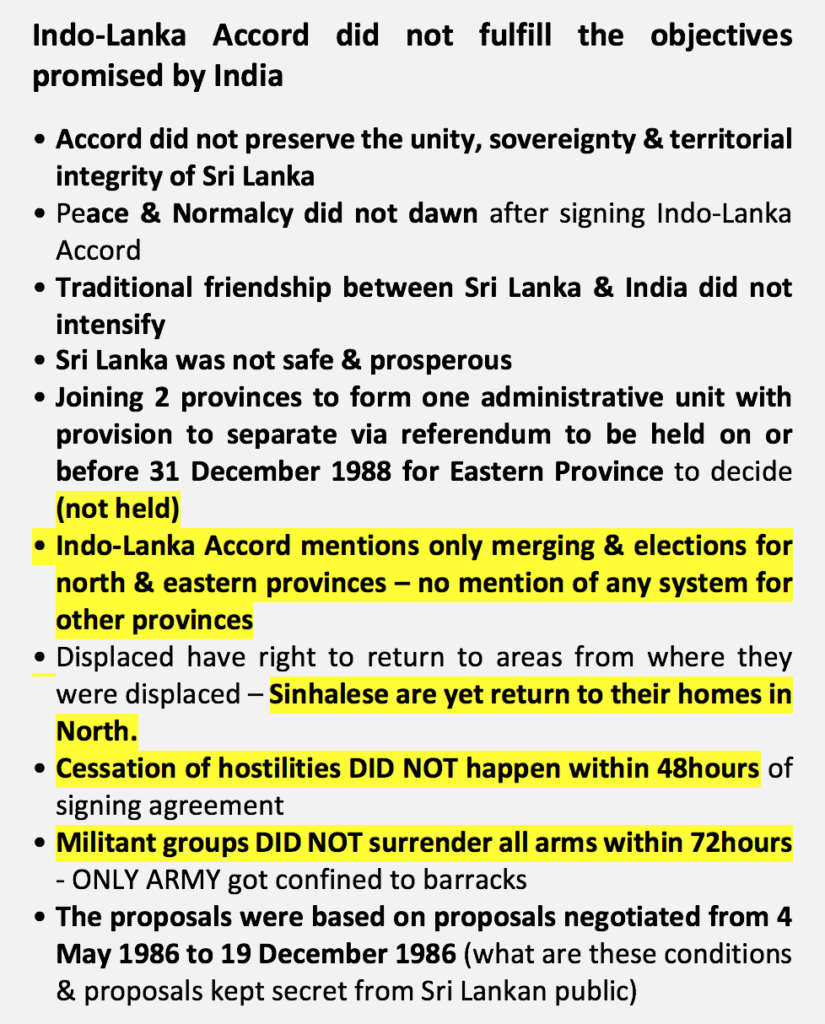 The major offence committed by India was to help create the Tamil National Army recruiting local Tamils who were armed by the IPKF and tasked to support the Chief Minister Varatharaja Perumalwho became the merged N&E Province’s 1st Chief Minister in whose cabinet Dayan Jayatilake also was a MP. India by helping create and arm the Tamil National Army not only breached but totally violated its own assurance given to Sri Lanka that it would preserve the unity and sovereignty of Sri Lanka 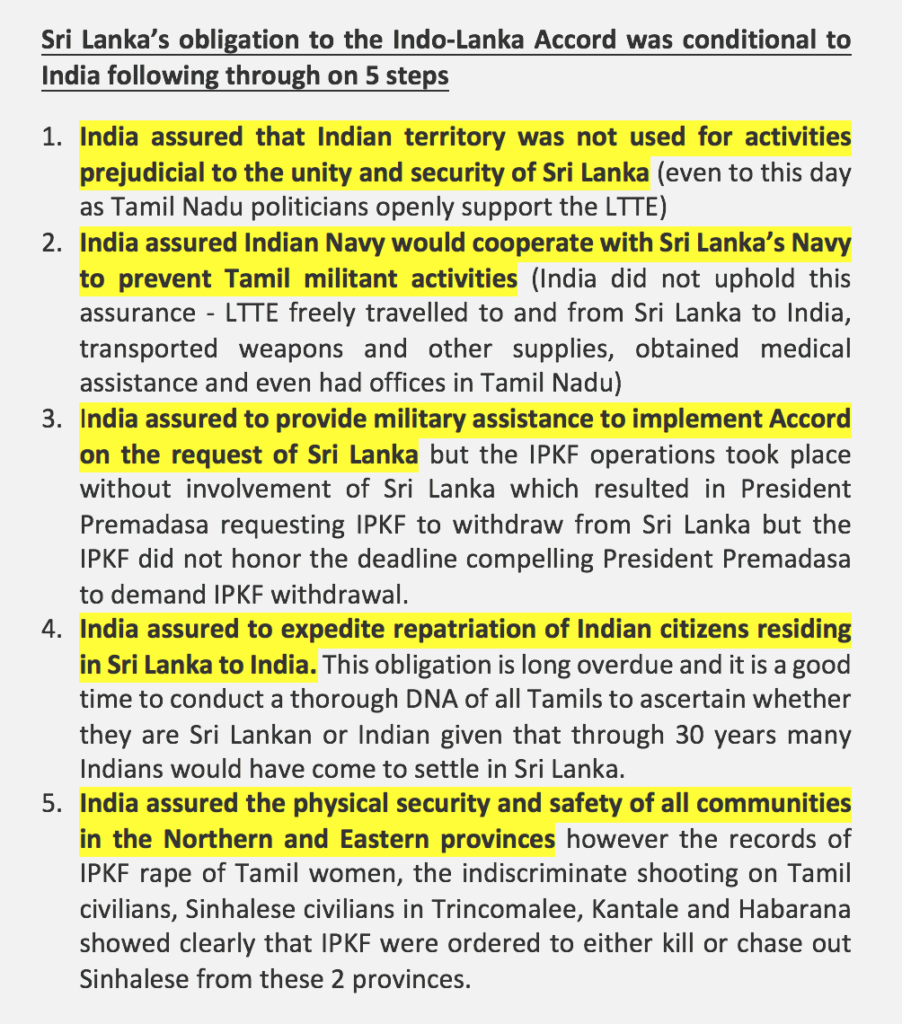 The major clauses of the Accord vis a vis Trinco Port /Trinco Oil Tanks had nothing to do with Sri Lanka’s Conflict or demands of LTTE or even Tamil leadership. These were all what India wanted to get using the Accord. 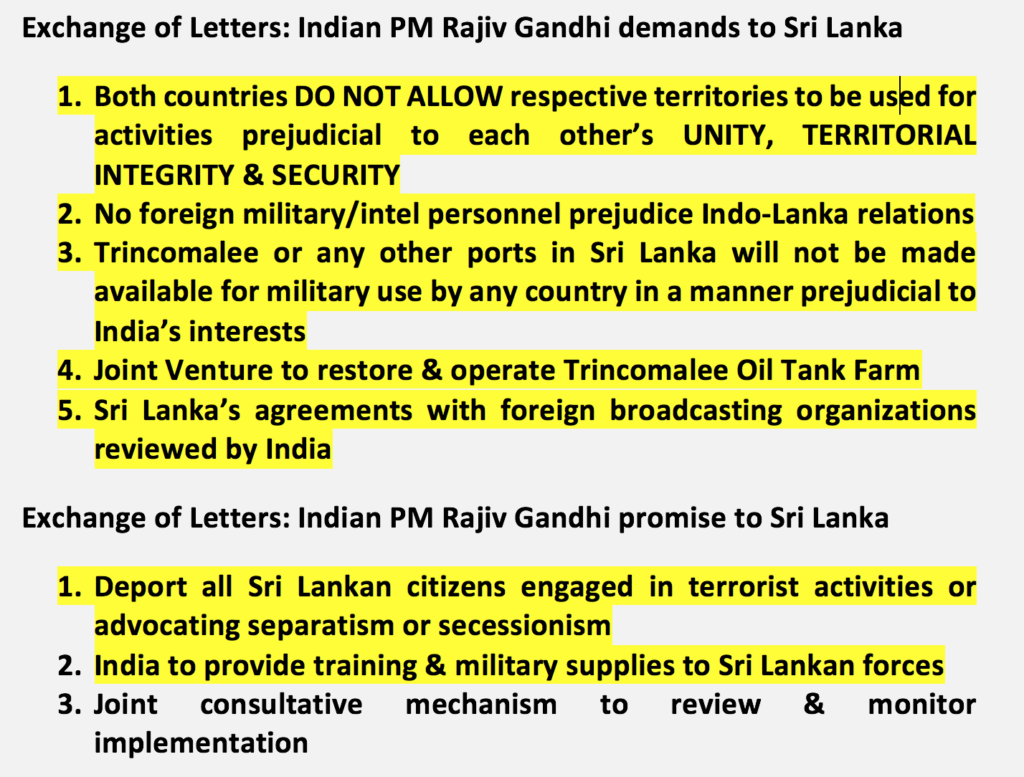 How did 13thamendment come about then? 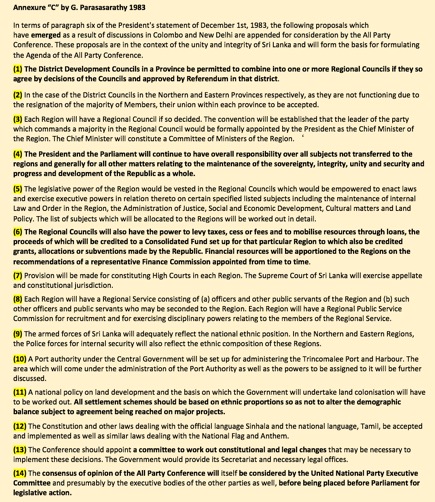 The Indo-Lanka Accord mentions discussions regarding the Accord taking place across 1986 & signed in July 1987.Though 13thAmendment was passed by Sri Lanka’s Parliament in November 1987 discussions had been taking place since Thimpu Talks with India playing a major role. The TULF letter to Rajiv Gandhi on 28 October 1987 shows how 13a/PC system/merger of North East evolved. The key point here is that these inclusions were all conceptualized by India and not by Tamil leadership or the LTTE.

Annexure C were culmination of India’s proposals to India & Tamils/LTTE SEPARATELY since 1983.In 1985 a draft framework of Accord & Understand was presented including creation of Provincial Councils with separate provincial councils for the North & East.

TULF in December 1985 forwarded proposals combining North & East into a single Tamil linguistic state with Indian nod of approval. Sri Lanka rejected this in January 1986. Sri Lanka’s new proposal in June 1986 agreed to devolution & drafts were prepared. These discussions & drafts were all with Indian influence and involvement & served as precursor to 1987 Indo Lanka Accord drafted & sent by India.

India created the problem, pretended to provide the solution, manipulated both Tamil politicians/LTTE & Sri Lankan Government to the advantage of India only. It was no one but India that demanded the merging of North & East provinces in 1984

Similarly, it is important to note that out of the 37 subjects to be devolved to the provinces 36 have been devolved. In over 30 years what is the success that the PC system can boast of? Is their failure because land powers & police powers are not given? The people of the provinces are not asking for land & police powers – so who wants it & why?

Global politics has changed. India was never in any US pro-West orbit during 1980s.Today India is a key partner in Quad/US Pivot to Asia. Why didn’t India quote 1987 Accord (denying any foreign military use of Sri Lanka’s ports) when ACSA was signed allowing US military to use Sri Lanka’s military installations/ports & airports. If ACSA is approved by India, then Sri Lanka too can interpret & misinterpret the 1987 Accord too. The 13a is a domestic legislation. India may well have had a role in inserting clauses and that is probably why the PC system has not served the people of Sri Lanka at all. Given the global dynamics it is good for India to take stock of its own vulnerabilities at home instead of making its neighbors vulnerable.

There was no nation called India in 1946. Colonial Britain gave independence to India cobbling independent territories and states in 1947. We were not alive to see that India but we may be alive to see the balkanizing of India into the same independent territories once more! India should now seriously worry about that for such an eventuality will no doubt erase all of India’s dreams & aspirations for super power status & supremacy in Asia. India would not want that, would it?